If you think that there is too much stress in your life, we know the perfect way to unwind. Imagine – you, scorching hot sun, lake, a personal watercraft, and not a worry in the entire world. If you haven’t had the pleasure of riding a jet ski yet, trust us, it’s just as fun as it seems.

You won’t be able to escape from your problems – most jet skis don’t reach speeds over 70 MPH, but for a time, you’ll feel like you are one of the characters from Top Gun, except that you’ll be a ruler of the water and not the sky. Unfortunately, private planes are a little bit more expensive.

However, if you think that jet skis will provide you just the right amount of fun, below, you will find a list of the four best models. Let’s go!

According to the experts at https://jetskitips.com/, this jet ski became so popular among people who don’t have much experience with PWCs because it’s relatively cheap, but at the same time, it’s specs are more than enough to have tons of fun with it.

If you became interested in jet skis by watching professionals ride the waves on true monsters, you might be initially a little disappointed. This model can only reach 50 MPH and fit three people, but when you finally arrive at the lake and start this PWC, you’ll feel like the king of the world. Or, at least of the lake.

It might not be the most powerful beast that you could get your hands on, but its reasonable price – around $5,000, makes it an ideal model for amateurs who don’t know yet for sure if they can handle being this cool.

If you want to aim a little bit higher, but don’t want to go completely overboard, you should try out Yamaha WaveRunner EX Sport. It costs around $8000, which is significantly more than Sea-Doo Spark, but it’s not that much for a PWC.

The increased cost isn’t just because of the brand. Yamaha is a well-known manufacturer of PWCs, and if you choose this jet ski, you won’t have to worry about its reliability. Apart from its durability, another advantage of this model is the 100 HP engine, which is almost twice as much as in the previous model.

On the other hand, the top speed of Yamaha WaveRunner EX Sport is also 50 MPH, which might be barely enough if your top priority is showing off in front of your friends. 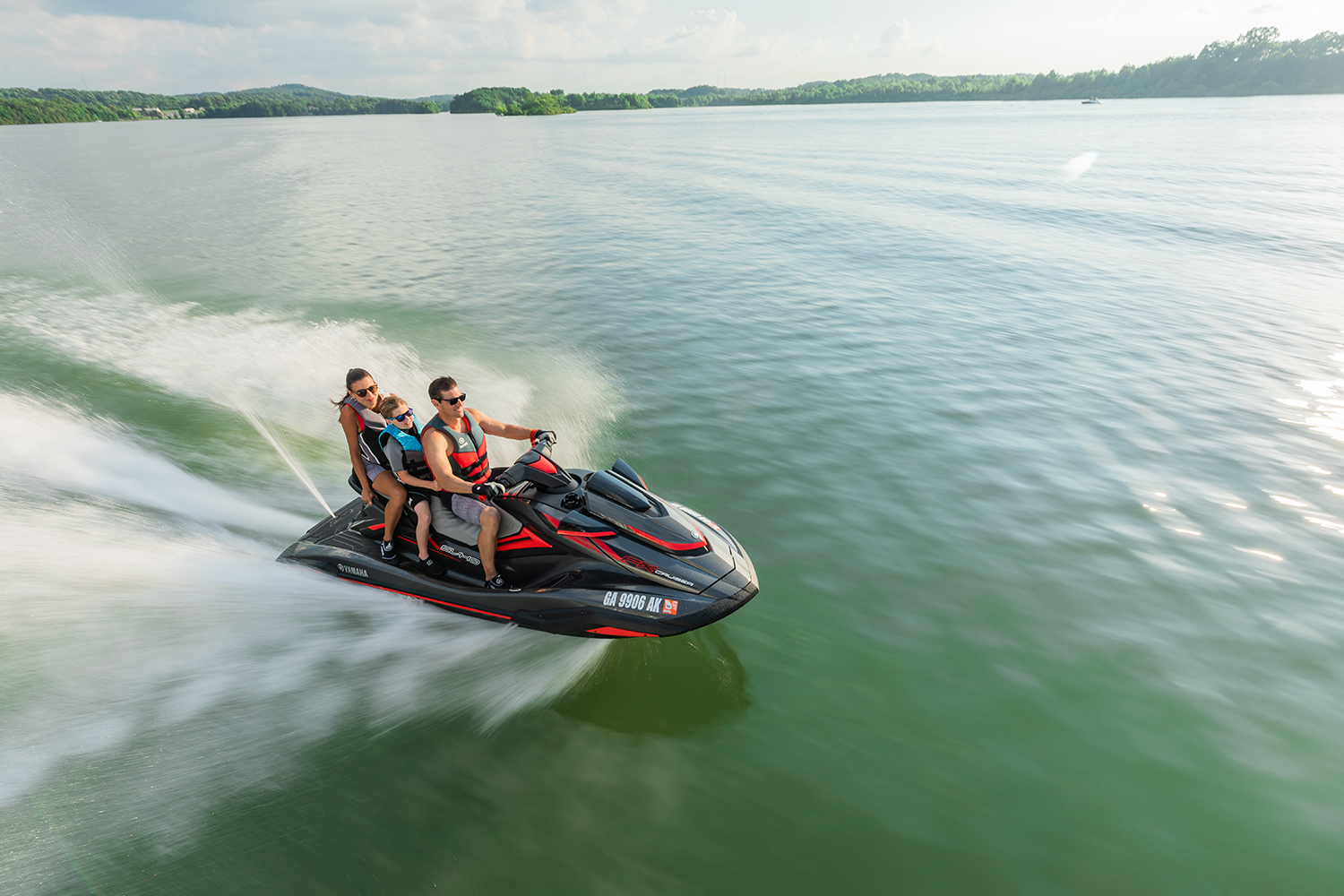 An excellent choice for those who are ready to spend more money on a PWC. It costs almost $10,000, but it’s worth every penny. Why? This model comes with a 160 HP engine and can reach more than 60 MPH.

It’s extremely reliable – though you wouldn’t really expect anything else from Kawasaki, a company with years of experience in manufacturing jet skis. Three people can comfortably fit on this water scooter, and there’s plenty of storage for food and cool beverages that will help you survive the scorching heat.

Kawasaki Jet Ski STX-15F (main image) has special modes for beginners, which is why despite its power, this model is also an excellent choice for those who don’t have much experience riding the waves on PWCs.

If you are an amateur or on a tight budget, then this jet ski might not be a great idea. You can reach 30 MPH in 1.5 seconds, and if the conditions are particularly good, you’ll be able to reach almost 70 MPH.

It also costs a lot – around $16,000, which is three times the cost of Sea-Doo Spark. However, that’s not without good reason. This model is extremely responsive, it’s made of durable materials, and you can mount wireless speakers on the dash, allowing you to blast not only surfer rock but all your favorite tunes from this PWC.

If its steep price doesn’t discourage you one bit, we must warn you – please be careful. It’s one hell of a beast, but it’s always important to exercise caution.

However, we understand that your passengers won’t be able to stop themselves from screaming in excitement. We agree – it’s pretty good fun.

When it’s hot outside, your first instinct might be to go to the nearest lake and let the water cool you down. Nothing against swimming in lakes, but no matter how good a swimmer you are, you won’t reach 50 MPH.

That’s why jet skis are so fun – the best models can reach as much as 70 MPH, though such water scooters are quite expensive. However, if a difference of 20 MPH doesn’t matter to you that much, you can find decent models for just $5,000.