Aquariums are beautiful decorations that can elevate a simple living room to the next level. But these days, aquariums have evolved into many different designs, some of which are truly spectacular.

Just like displays of art, thoughtfully aquascaped aquariums are medically proven to be beneficial for mental health. So, it’s not surprising that you can see huge tanks teeming with colorful tropical fish in office buildings, shopping malls, integrated into spiral staircases, used as room dividers, and even as kitchen islands.

Keep reading to find out how you can incorporate an aquarium into your interior design plans.

Aquariums are no longer simple rectangular, glass structures, but they come in all kinds of interesting shapes and sizes.

So, when you think of a traditional fish tank, you most likely picture a rectangular-shaped structure that sits on a cabinet or stand that’s placed flush against a wall.

A rectangular aquarium can be transformed from something rather plain into a stunning focal point by using imaginative planting and filling the tank with schools of glittering tropical fish.

Take the rectangular fish tank to the next level by incorporating it into a wall. That can create the illusion of a window looking onto an underwater ocean or river world.

This style of an aquarium is often used in restaurants, giving easy access to the rear of the tank for maintenance while removing the risk of a freestanding tank being accidentally knocked over.

Shallow countertop aquariums can be incorporated into cabinets and bars, adding a luxurious, glamorous touch to your interior design scheme.

The main issue with countertop tanks is that lighting them can be problematic. However, an effective workaround is to use extra slim, waterproof LEDs between the counter and the top of the aquarium. For maintenance, the countertop lifts right off.

Aquariums used as islands and room dividers make beautiful features in large rooms and are popular in upmarket hotels and restaurants.

Room dividers can be formed from a fish tank placed inside a wall that’s viewable through two windows. You can also create a “peninsula” tank that can be viewed through three windows or choose a large tank as an island in the center of a room that can be viewed from all four sides.

Islands and room dividers present the viewer with the impression that the fishes are floating in mid-air.

Where floor space is limited, a cylindrical aquarium is a great choice, as you can create a very impressive display without it being overwhelming. The cornerless design of cylindrical tanks creates a beautiful natural flow that works extremely well, especially when used as an inset to a spiral staircase.

Cylinder-shaped fish tanks are typically made from acrylic, as the refraction the material creates doesn’t distort the image of the fish.

Oval aquariums share the same cornerless, seamless flow as cylindrical tanks. This style of aquarium can be elongated to create a room divider or set within a wall to make a porthole window. 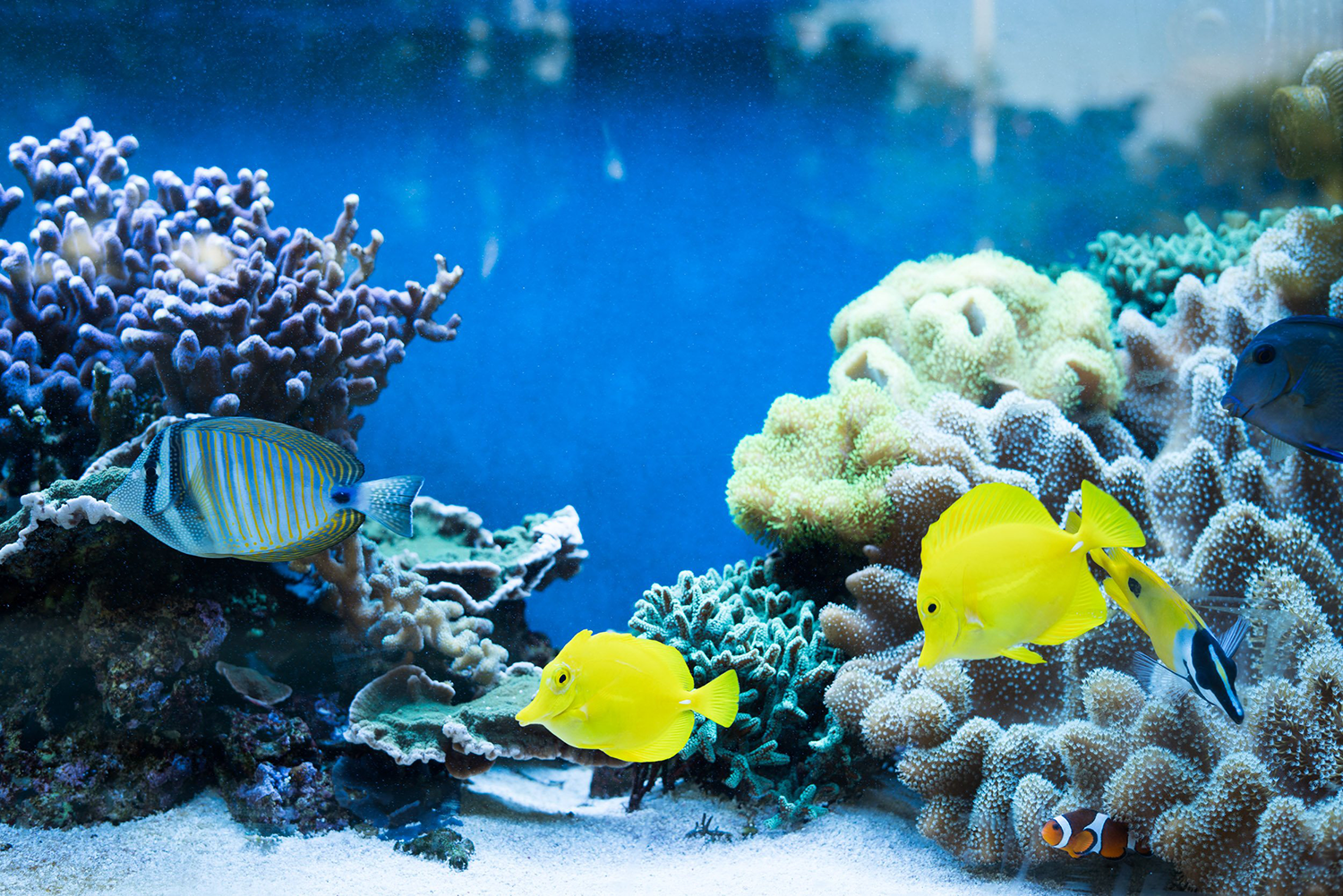 The materials used in the construction of aquariums of all shapes are chosen for their safety qualities, the view that they provide for the onlooker, and their durability.

Smaller rectangular or square aquariums that are under one meter tall are generally made from glass. Any tanks over that height are usually made from acrylic material for safety reasons.

Although glass is generally less expensive than acrylic and doesn’t tend to scratch as easily, acrylic does have many other benefits.

Acrylic is widely regarded as safer than glass in that it is less likely to crack or sustain serious damage in the event of an impact. Acrylic is also much lighter than glass, which is an important consideration when building an aquarium on an upper floor.

Acrylic gives viewers a much clearer picture than glass. That’s because acrylic allows 92% of light to pass through it, whereas only 80% to 90% of light passes through glass.

Also, glass has a slight greenish tint. That’s not especially noticeable in small aquariums, but in very large tanks, the glass must be thicker to withstand the water pressure inside. So, the green tint becomes much more pronounced, impacting visual clarity.

If glass is scratched, it’s extremely difficult to repair. However, it is possible to buff out any scratches and imperfections from acrylic. In fact, even a badly scratched acrylic tank can be completely refurbished by polishing, unlike glass.

Acrylic tanks distort less than glass when you look at the contents through a curved surface. That’s because acrylic has almost the same index of refraction as water. So, when you look at fish and decorations inside an acrylic tank, you see their real-time color and size.

Acrylic can be transformed into many shapes, making it much more versatile than glass.

The sky’s the limit when it comes to choosing an aquascaping style for your aquarium. So, you can choose something to suit your decoration scheme.

If you want an aquarium design that’s very low-maintenance, a freshwater hardscape might be perfect for you.

A freshwater hardscape tank contains substrate, rocks, driftwood, twisted roots, and other decorations but no plants. This style of setup is perfect in a minimalist space and can look extremely effective with schools of brightly colored fish and a few larger feature fish.

Freshwater planted aquariums are just about the most popular style of tank design with hobbyists worldwide.

Plants give a softer effect to your aquascaping and create a more relaxing ambiance in the room. The plants need maintenance and trimming from time to time to keep them looking tidy, but many fish species need the shelter that planting provides.

Terrariums and paludariums are basically a combination of landscaping and water. Often, these tanks have a back wall covered with mosses and plants above an aquarium containing colorful tropical fish and invertebrates. A waterfall effect trickles down the green wall to keep the plants hydrated.

This kind of aquarium functions as a mini-ecosystem. The waste that the fish produce is taken up by the plants to use as a fertilizer. That process naturally filters the water to make it safe for the fish.

Marine fish can be more challenging to care for when compared with their freshwater counterparts. That’s largely because the water needs to contain the correct level of salt for the fish, generally matching the salinity of natural ocean water.

Saltwater fish are usually far more colorful and interesting than freshwater species, but they are also typically more expensive to buy.

Marine tanks can be aquascaped with simple live rock. You can also create an artificial resin coral reef as decoration, which can look extremely effective. The main downside is that artificial corals are labor-intensive to keep clean.

Successfully keeping a reef aquarium that contains live rock, living corals, and anemones do take some experience and expertise. For corals to thrive, they need lots of light in the correct spectrum, good water movement, and pristine water quality. Also, as corals grow, they leach minerals from the water. So, the mineral content of the water needs testing periodically and topping up as required.

Reef aquariums are fascinating biotopes that can be home to many creatures, including urchins, anemones, starfish, invertebrates, and unusual fish species. If you have a reef aquarium in your home, you can be sure that your visitors will linger to watch the activity inside.

Jellyfish aquariums are usually only seen in large public aquariums. However, recently, these graceful, unusual pets have made an appearance in people’s homes. There are literally hundreds of different species of jellyfish in the world’s oceans, ranging from the arctic to the tropics.

Jellies lend themselves to any aquarium shape, although they do need a flow rate to suit their weak swimming ability. For example, in a regular home tank, jellyfish are at risk of being sucked into water outlets or injured on rocks and abrasive substrate. However, if you can create a safe habitat, jellyfish can make a change from the usual fish.

As you can see, it’s possible to incorporate some beautiful aquarium features into the interior design schemes of homes, offices, and public spaces.

Although on a small scale, an imaginatively aquascaped home aquarium can be just as beautiful and enthralling to look at as a huge public display. It’s really just a matter of using your imagination to create a look you love that gels perfectly with your interior décor style.