Dinner by Heston Blumenthal is one of the most famous restaurants in the world, and for good reason. Opened by  Blumenthal in 2011, the eatery, located in Knightsbridge, London, had earned its first Michelin star within a year and, within three, had been ranked the fifth-best restaurant in the world by the celebrated Restaurant magazine. No mean feat.

Dinner remains a huge draw for those seeking sublime culinary experiences, and the restaurant has continued to develop and evolve. We explore below the reasons that it retains its position in terms of both its popularity and its envelope-pushing cuisine.

One of the driving forces behind Dinner’s ongoing success is Blumenthal’s resolve for it to have at its heart historic British gastronomic fare: the dishes on the menu have been painstakingly historically researched, with the British Library scoured to provide the details needed. Many of the dishes on the menu have the date that they were popularly eaten appear next to their details.

The single-minded passion and fascination that Blumenthal has for this concept are evident in every element of the dining experience, from the Hay Smoked Trout or Meat Fruit starters to the Salmon Dressed in Champagne and Black Foot Pork Chop mains, the food reflects the eatery’s ethos: some of the dishes date as far back as the thirteenth-century. Work is ongoing, with new dishes being discovered, researched, and added to the menu continually.

A further reason for the ongoing popularity of Blumenthal’s culinary brainchild is the ambiance and decor of the dining rooms. The spaces have a contemporary, fresh edge and yet maintain a deep connection to the sense of tradition inherent in the menus; the commercial furniture used throughout is elegant yet relaxed – classic without being imposing, aimed at offering comfort as well as aesthetic pleasure.

Floor-to-ceiling glass walls provide diners with a view of the kitchens, where they can see the pulley system in operation – it’s been modeled on that used by the Royal Court – which serves to turn a spit over an open fire, for evenness of cooking. Guests can also enjoy views over Hyde Park, which provides another historical connection: the park was one of King Henry VIII’s favorite hunting grounds. 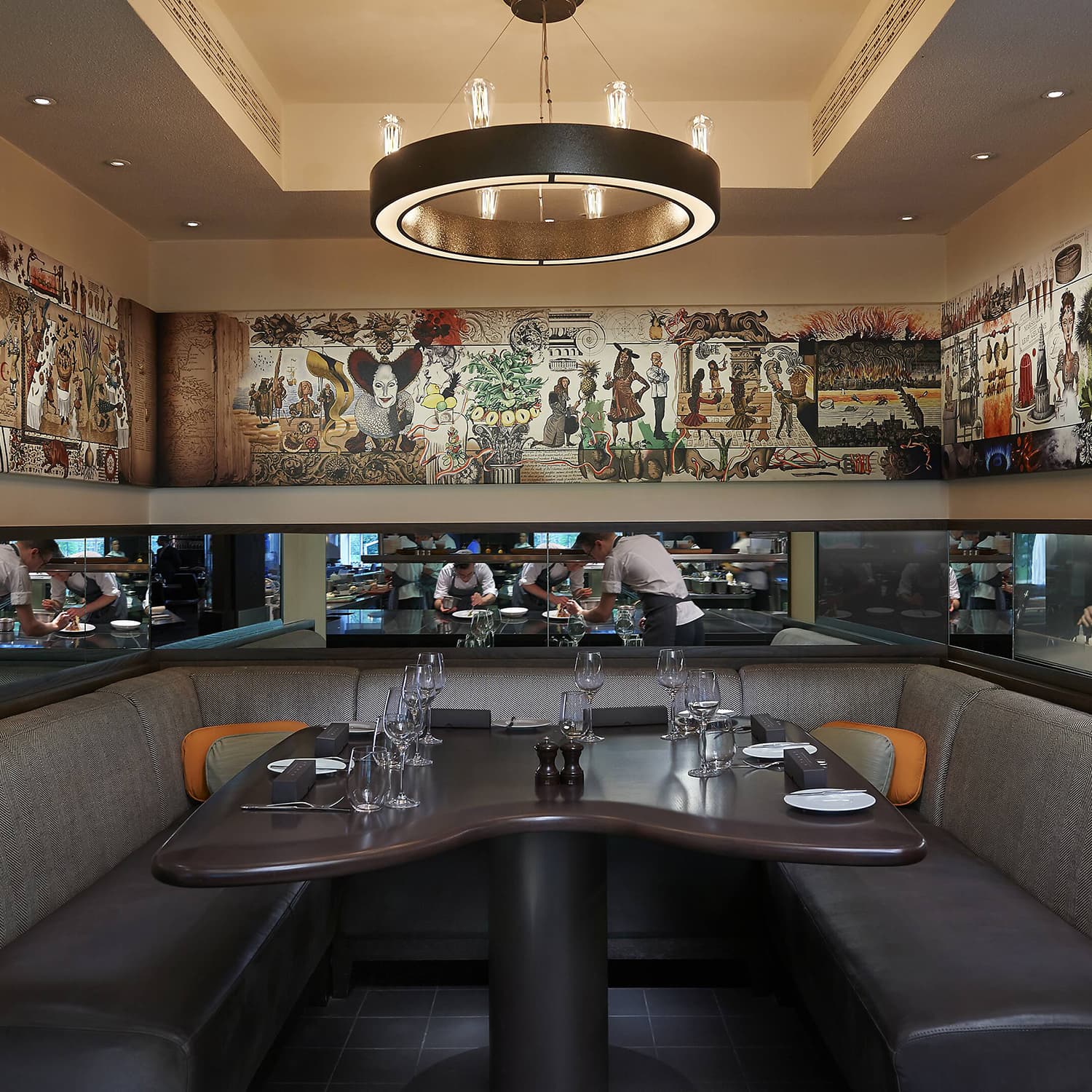 And if reserving a standard table at Dinner isn’t enough, the restaurant also boasts a Private Dining Room and a Chef’s Table to further up the experience ante. The former offers bespoke dining in a room that takes the sixteenth-century Tudor era as its aesthetic inspiration. Up to twelve guests can be seated, who can immerse themselves in the culinary delights on offer while dining around an oval rosewood and sapele table, seated on luxurious chairs upholstered in thick red velvet.

Alternatively, guests may choose to book the Chef’s Table for an up-close and personal look at the action as the chefs weave their magic in the kitchens. A specially tailored menu will be served to four to six diners by the Head Chef.

Heston Blumenthal often described as a modern Willy Wonka, is key to Dinner’s runaway success. The unique flavor combinations and daring dishes he creates are a huge attraction to those looking for a truly unique and exciting dining experience, and he has been credited with changing, forever, our approach to food and dining. Entirely self-taught, it’s Heston’s curiosity that inspires him to continue to create innovative and mind-boggling menus.

Joining Heston in the Dinner kitchens is Head Chef Jon Bowring; he previously worked at Rick Stein’s seafood restaurant in Padstow before moving to join the team at Dinner in 2013. 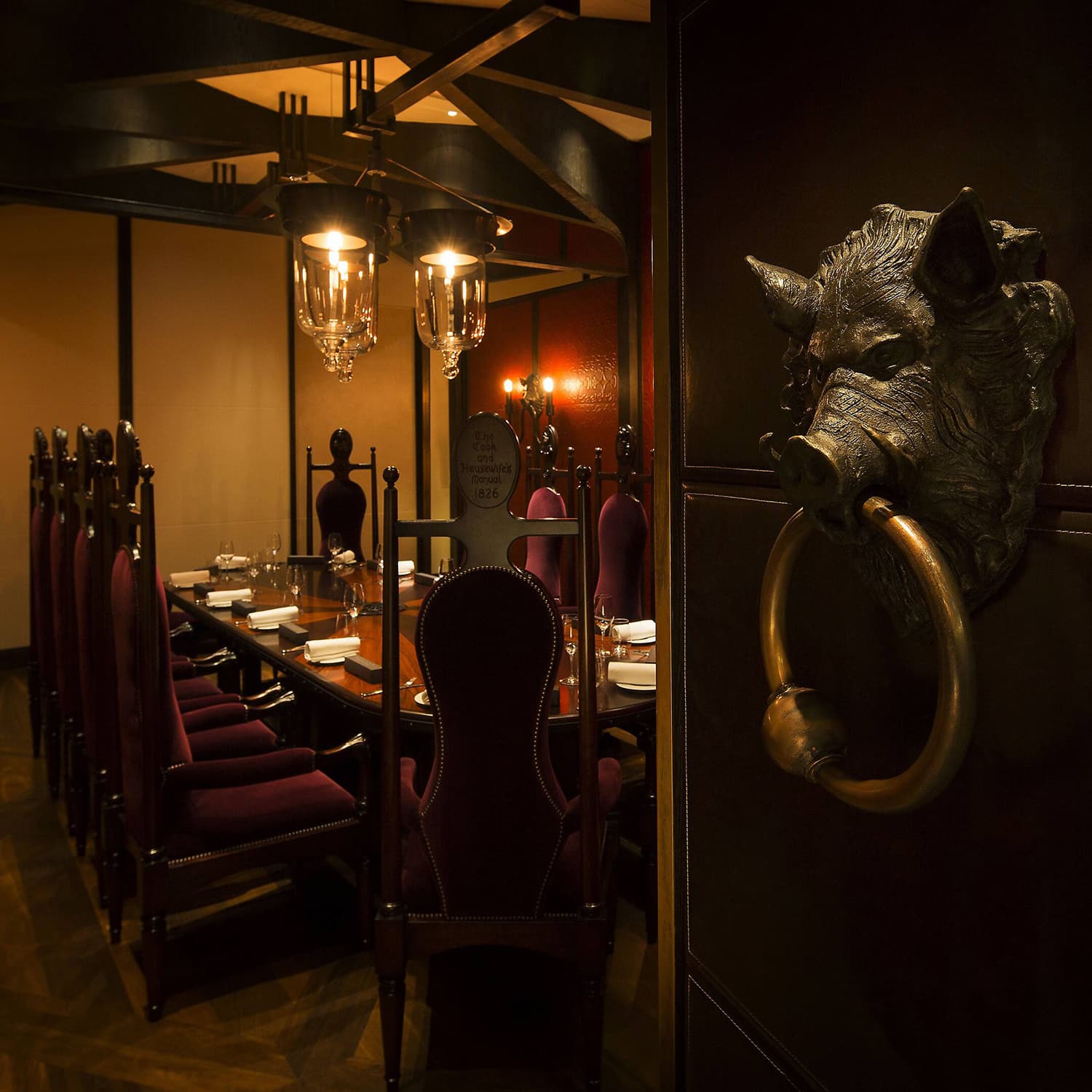 The service that diners receive is second-to-none and an important part of Dinner’s prestige. Not only are the staff friendly, welcoming, and attentive, but they are extremely knowledgeable on every aspect of the menus, including the wine list. Each member of staff needs to undertake rigorous training and subsequently pass an exam, to be eligible to work in the restaurant. Only individuals who have previously worked in hospitality – and at a similar level – are taken on, too, so diners can always be assured of being professionally and expertly looked after.

And – of course – the consistently unparalleled quality of the food is the fundamental reason that Dinner by Heston Blumenthal remains ranked as one of the best dining experiences in the world. It continues to pick up awards and accolades, including two more Michelin stars in 2021, along with four AA rosettes.

For example – the restaurant’s famous Meat Fruit dish is served on a wooden plate and is a rich chicken liver offering that’s unfeasibly soft and redolent of plums; Rice and Flesh – another popular menu option, brings together almond, saffron, lamb sweetbreads, and smoked olive oil. Expect the unexpected when it comes to dessert, too: Tipsy Cake features spit roast pineapple while Chocolate Bar dates from around 1730 and comprises passion fruit jam and ginger ice cream.

While the food remains this breath-taking, Dinner’s position at the pinnacle of the culinary world is unlikely to be challenged anytime soon.