If you’re reading this at work, there’s a good chance you’re isolated in a cubicle or distracted by the commotion of an open-plan environment. The world has tried both of these contrasting scenarios, and neither appears to work. 33 percent of companies worldwide have an open office —believed to foster collaboration, a flat hierarchy and more social connection between employees. But in recent years, substantial research has only increasingly debunked the key selling points of the open office. In fact, the opposite is often true with an open plan. 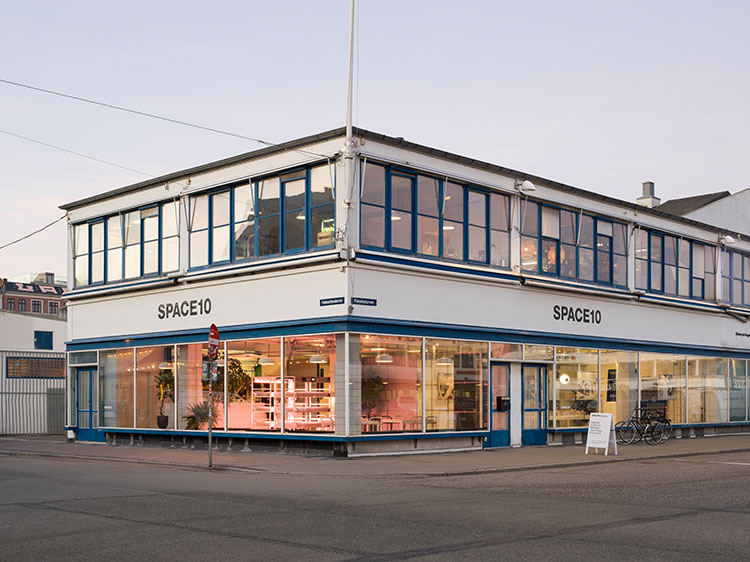 Instead of encouraging employee collaboration, open offices create employees who talk to each other 70 percent less and send about 50 percent more emails or Slack messages. Instead of flattening hierarchy, open office spaces make people feel exposed or watched, and often exacerbate the power dynamics already in play at work. (This is especially true for women.) Instead of cultivating creativity, open offices tend to stifle it: 65 percent of creative people need quiet to do their best work—something that’s almost impossible in open offices, where overhearing conversations is the biggest frustration.

All of this amounts to a concerning statistic: research conducted in 2014 found that a whopping 85 percent of people are dissatisfied with their working environment, primarily because they can’t concentrate. In the same study—of 10, 000 workers, by the way—over a third of respondents said they’d have to leave the office if they wanted to get their work done. To make matters worse, a Canadian study found that people working in open plan offices took 70 percent more sick days than those who worked from home.

What, then, is the solution for this day and age? How can workspaces combine the collective energy of the open-plan office with the privacy and productivity-promoting environment of the cubicle? SPACE10 and Spacon & X search for answers in SPACE10’s new Copenhagen HQ. 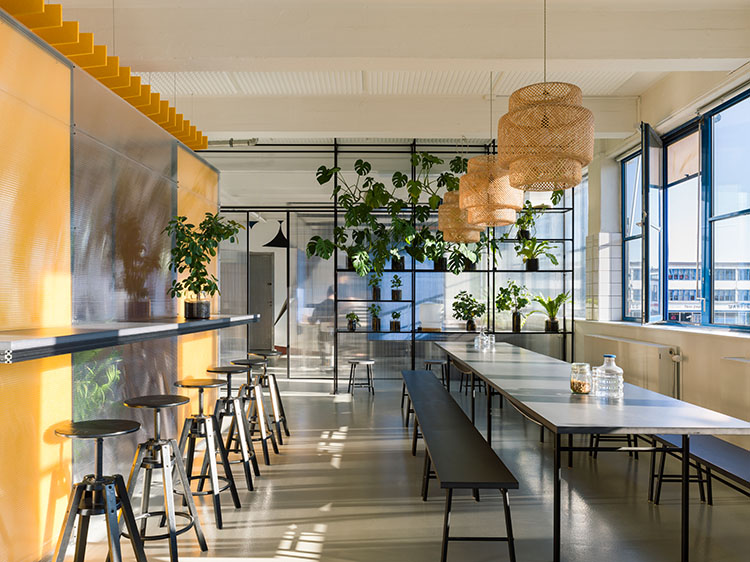 Employees now have the ability to flit from an open meeting room to the privacy of an insulated cocoon. They can recline in a comfy armchair while writing or researching, or switch to a standing desk to change posture. And if they’re in the mood for socializing, they can move to the ground floor to interact with colleagues and the general public in informal settings. 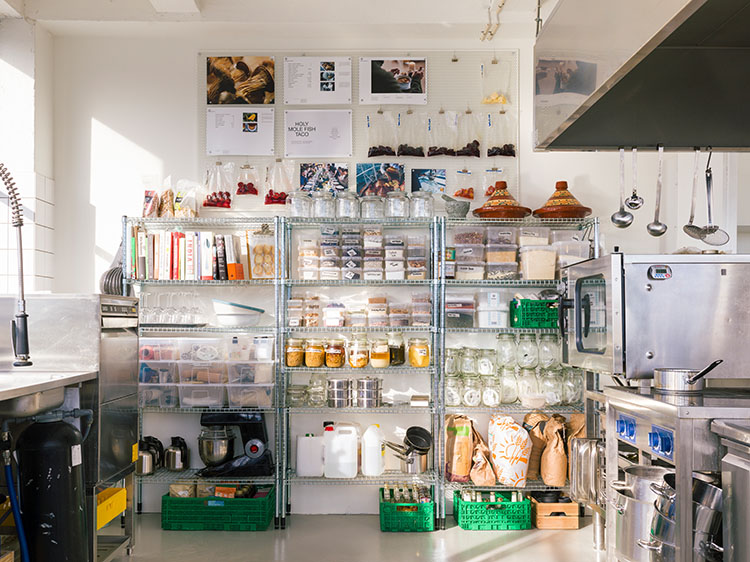 New workstations hybridize the cubicle and open plan. Equipped with adjustable desks, these semi-open acoustic ‘cubes’ provide privacy and suggest a barrier to those outside while enabling easy interaction between teammates within. “Boundaried space drives creativity. It drives deeper thinking, and it also creates clarity around the relationships you are entering,” explains Jed Shamel, SPACE10 Talent Director and in-house psychologist.

The V/T Slot system forms the flexible base frame structure of the workstation cubes, which are clad in sound-absorbing EchoJazz panels for privacy. Made from recycled plastic, the beautiful, colorful panels can be adjusted and replaced as needed, and are one of the few new materials introduced into the redesign.

“The workstations are crucial for divvying up space for various activities, and people can customize their own workspaces as they see fit,” adds Kevin Curran, Program Lead at SPACE10 and head of the redesign of SPACE10, together with the designers from Spacon & X.“If fewer panels are used, making a team more open to the rest of the office, the steel frame still suggests a barrier to guide spatial flow within the interior. And if a week of collaborative focus is needed, a team can attach more panelling to the framework. By providing privacy and sound absorption, the solution means that those inside don’t get distracted – or distract others outside.” 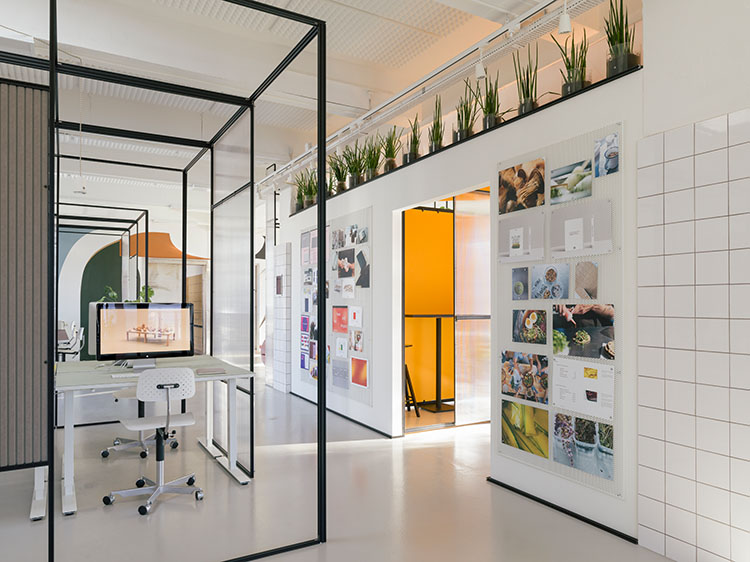 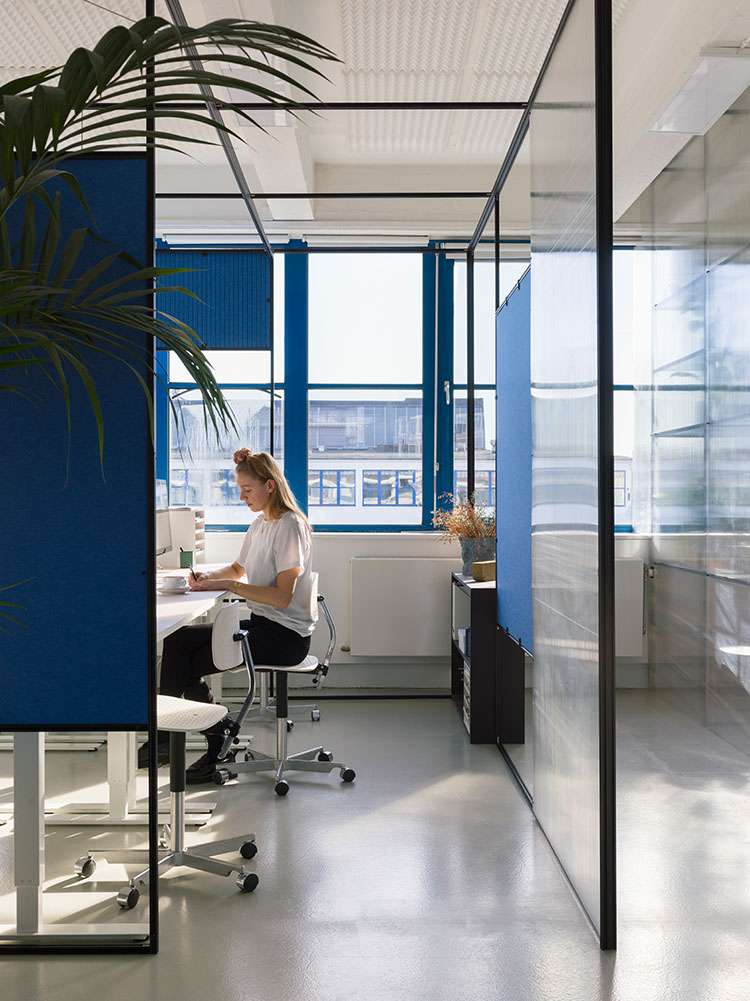 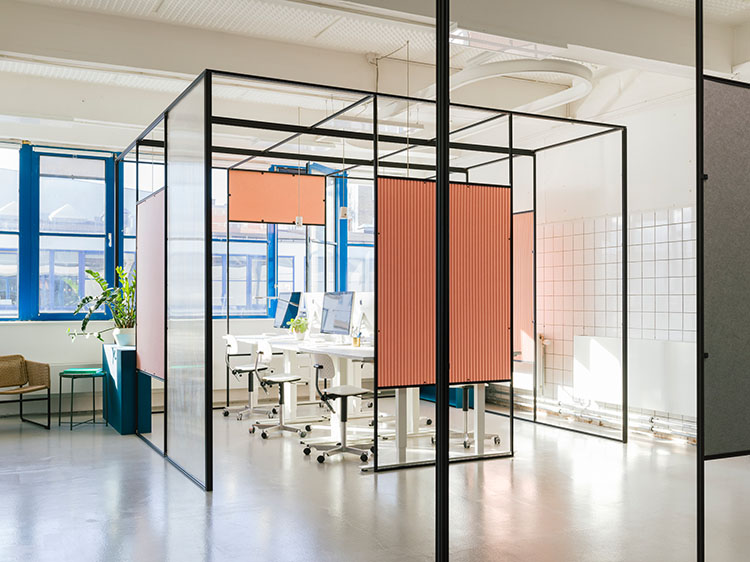 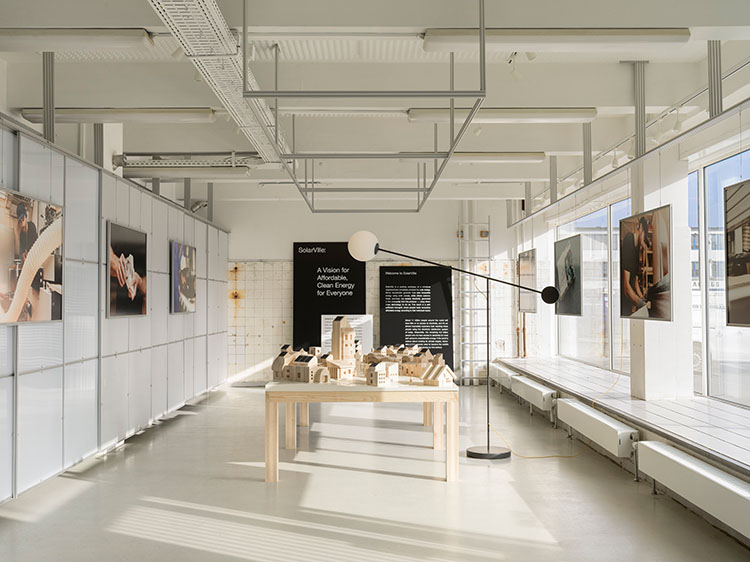 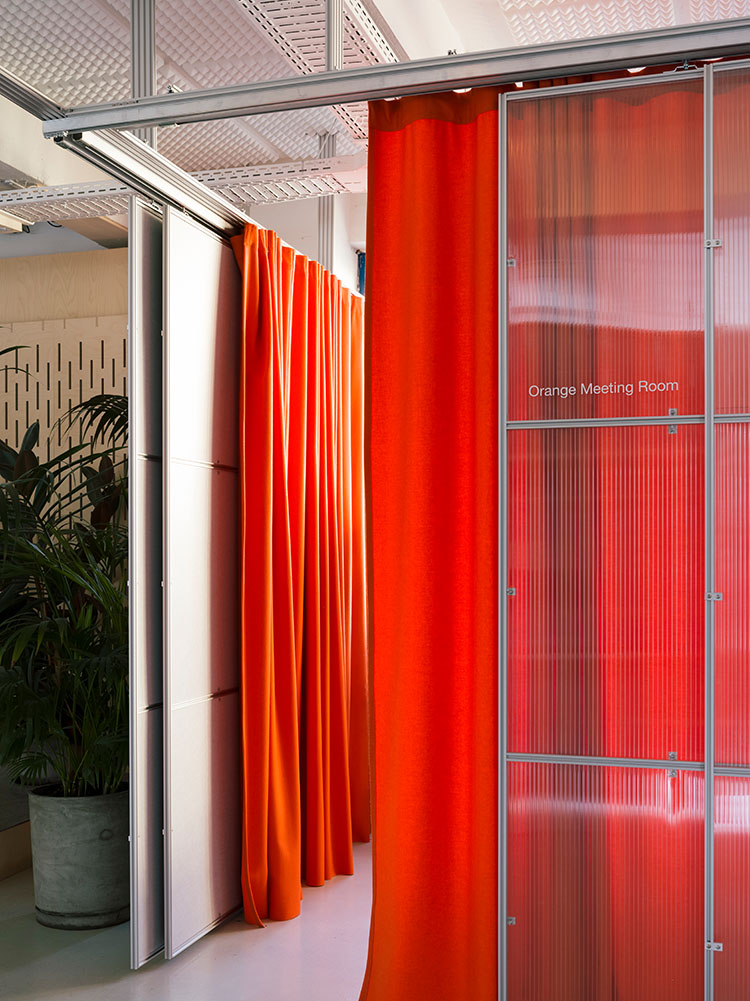 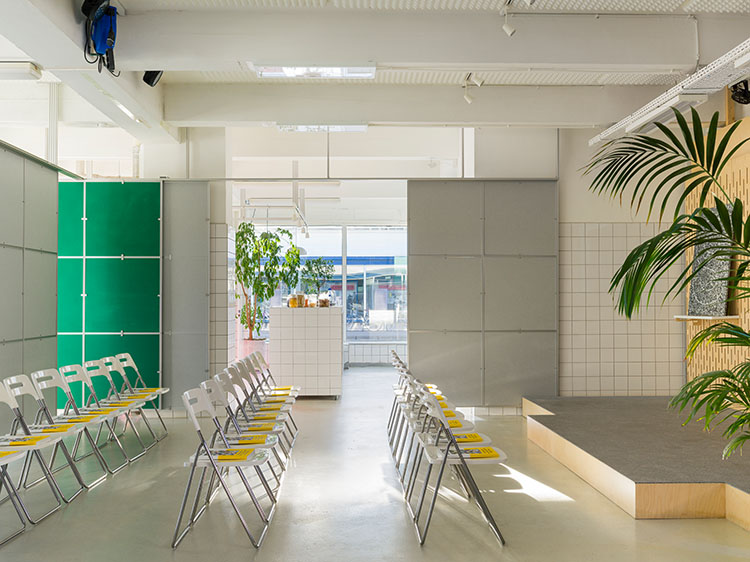 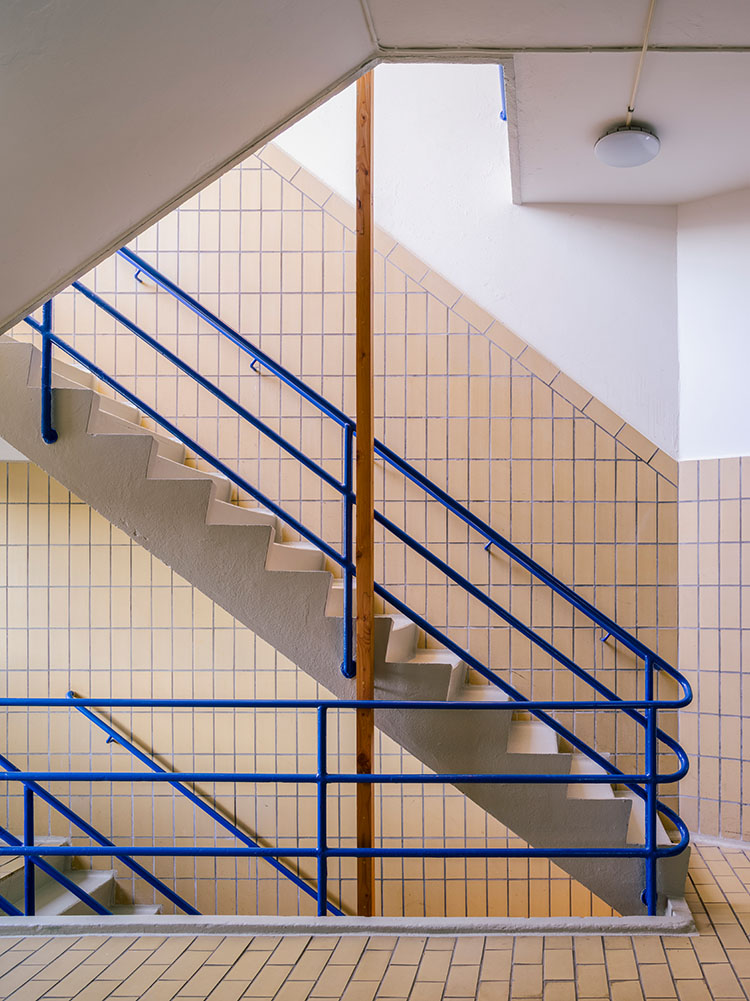 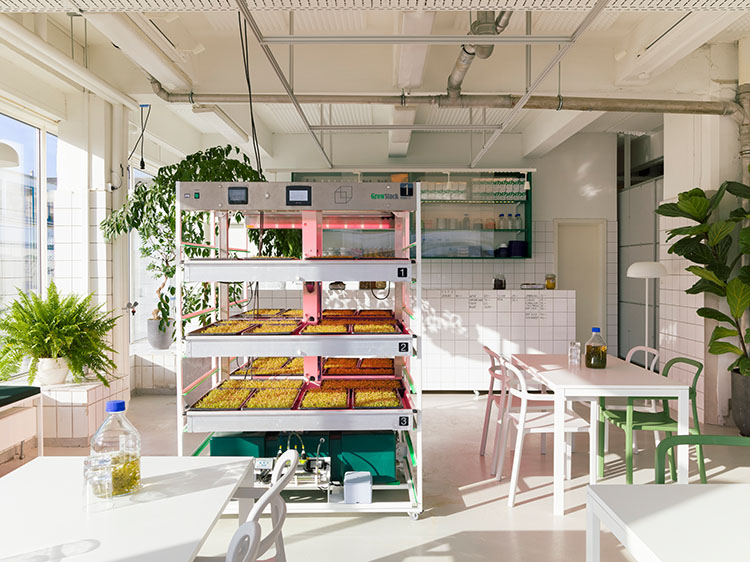