You’ve heard of a thatched roof, and you’ve heard of a solar roof, but what about a green roof? A green roof doesn’t just refer to the color of the shingles or metal that you use to cover a house. Instead, it involves actual plants that not only live but thrive on top of a building. And it’s a growing trend among ecologically minded architects, homeowners, and commercial building owners. To learn more about green roofs and their advantages, read on!

What Good Does a Green Roof Do?

There are a number of benefits to integrating this type of roofing system into the construction of a new house or commercial building or converting an existing structure.

In some cases, green roofs offer unique advantages. In others, the vegetation atop green roofs provides the same advantages that plants everywhere offer. Let’s take a look at both types! 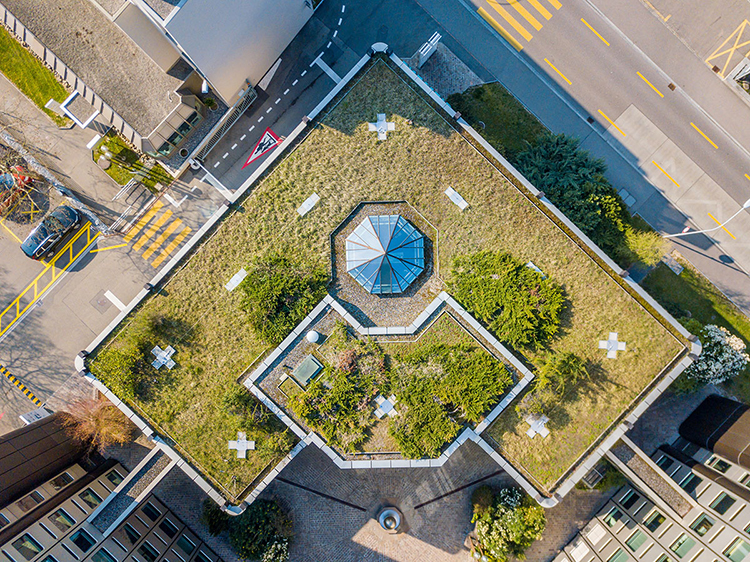 Green roofs help to reduce water runoff, which in turn eases up on the burden on a building’s gutters and drainpipes, and on the city’s sewer systems. Rather than sluicing away water, as so many traditional roofs are designed to do, a green roof is outfitted with soil and vegetation. The organic system acts like a sponge, soaking up rainwater and using it to produce the plants that give the roof its beautiful and beneficial nature.

You probably learned about the importance of plants to humans’ environments when you were in elementary school. They rely on carbon dioxide to live and use photosynthesis to convert sunlight and CO2 into oxygen — which humans rely on, of course.

Any greenery planted on a roof does the same job of producing oxygen and eliminating carbon dioxide from the surrounding atmosphere. In addition, it lowers the distribution of smog and dust and help clean toxic particulates from the air.

Imagine, if you will, a green roof sitting side-by-side with one covered in black asphalt. Which one do you imagine help keep the building cooler?

Green roofs not only make shade for rooftop living spaces like cafes and parks, but they also help to insulate the structure beneath — leading to lower cooling and heating costs.

However, to fully understand just how beneficial green roofs can be, you need to know about something called the Urban Heat Island Effect. In layman’s terms, this is a phenomenon that makes cities hotter due to the immense number of impermeable, reflective, and just plain dark surfaces that are created by skyscrapers, sidewalks, asphalt streets, and other necessities of city living.

Urban Heat Islands’ increased temperatures are countered by increased air conditioner use, which in turn consumes massive quantities of energy and contributes to global warming. 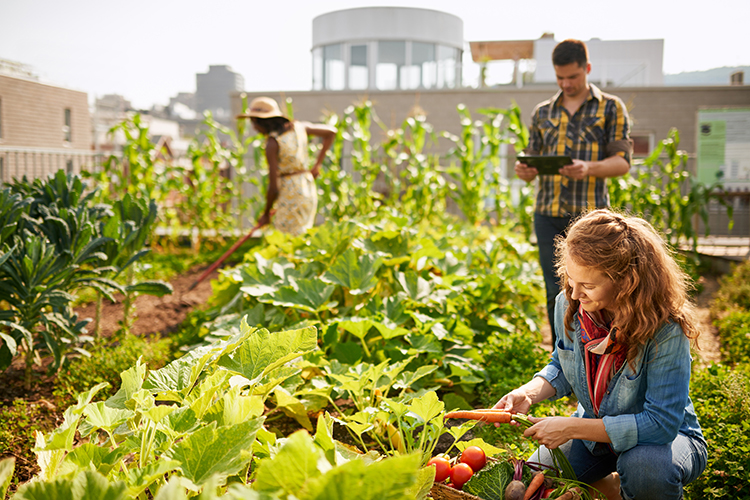 Apartment buildings — or even office buildings, for that matter — that are set up for green roof infrastructure can allow occupants to raise their own food by planting gardens. Some urban restaurants with green roofs can grow vegetables, fruits, and herbs they use. It doesn’t get much more locally-sourced than that!

Just as in a ground-level garden, green roofs can grow flowers, medicinal plants, and ornamental greenery to be enjoyed as well. Residents of buildings with green roofs can repair to those recreational areas to enjoy communing with nature in a way that’s often much less accessible in major metropolitan areas.

So What Are the Downsides?

Unfortunately, there are some disadvantages for preventing more people from choosing green roofs. For starters, they have a high upfront cost, due to the extensive work they require.

“Green roofs are not suited to every style of building,” explain the experts at Guardian Roofing. “They generally require a flat roof structure, for obvious reasons, and they also must be carefully tailored to the climate.”

Nevertheless, as climate change continues to threaten our planet, and environmentally-minded citizens look at new ways to combat that damage, green roofs represent an excellent solution that also brightens our lives, quite literally!