In 2017, MAD Architects was commissioned to design a kindergarten next to a senior citizens’ apartment in Beijing, reflecting the client’s “intergenerational integration” ethos that blends pre-school education and elder care. The subject site, covering an area of 9,275 square meters, consisted of an original 18th-century Siheyuan courtyard, an adjacent replica courtyard built in the 1990s, and a four-story modern building. Following its completion at the end of 2019, the kindergarten now serves as a pre-school education space for 390 children aged from 1.5 to 6 years old. 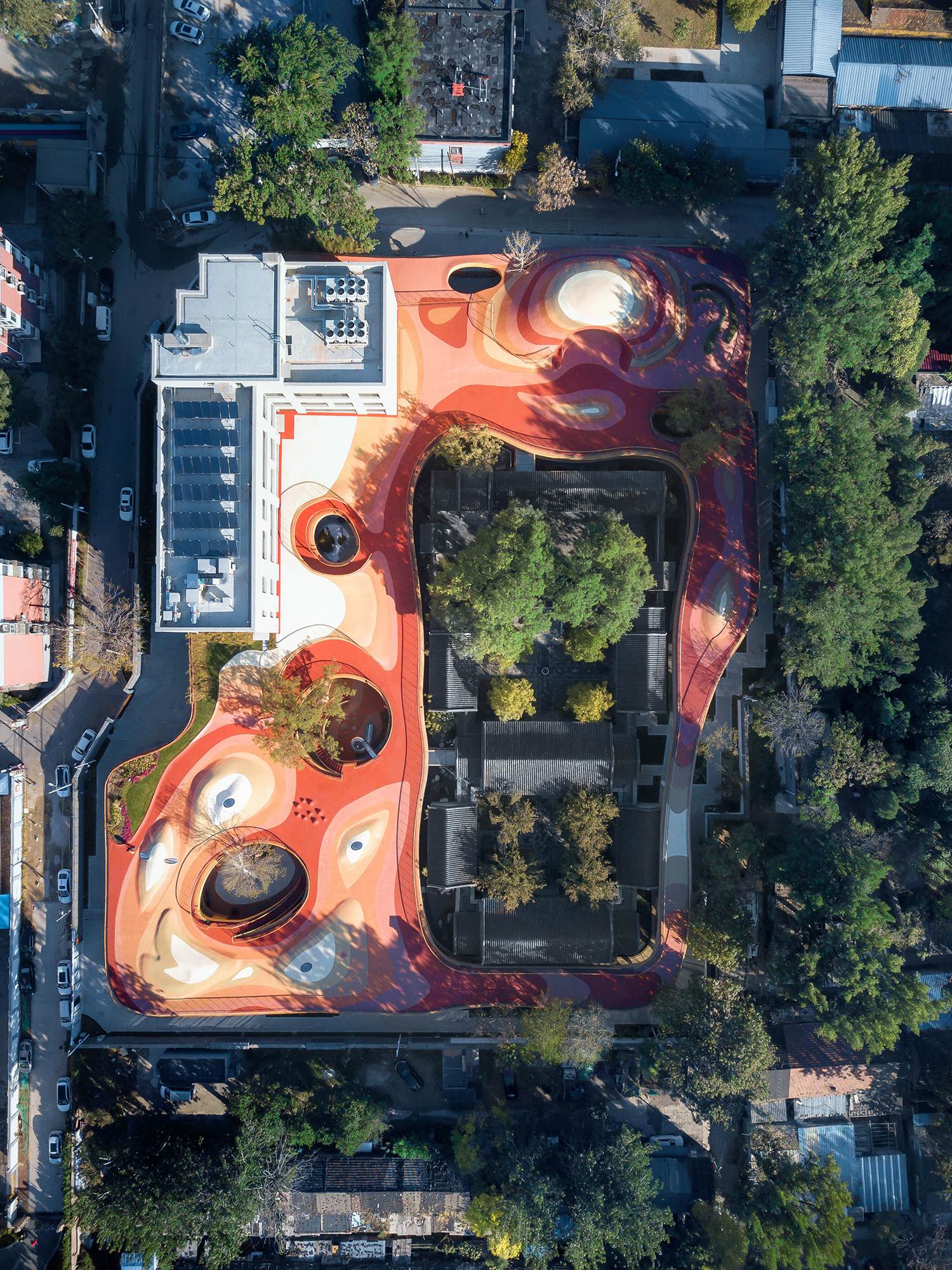 “When I looked back at my own kindergarten years, and even the ones I saw after I grew up, I always wondered what it is that kids long for the most,” said Ma Yansong. “Perhaps it is freedom and love. A kindergarten doesn’t always have to offer complex hardware or fixtures, but it must always make kids feel freedom and love – something that leads them to endless possibilities.”

In shaping the project, MAD chose to remove the replica courtyard outside the historic 18th-century original, and replace it with a new space that holds the Siheyuan courtyard “in the palm of its hand.” As it envelops the old courtyard, the new space adopts a low and gentle posture, with a flowing motion contrasting the strict, orderly layout of the historic structure. This tension, emerging from different dimensions in time, gives the building a renewed life. The new does not overshadow the old, while the past does not overtake the present. 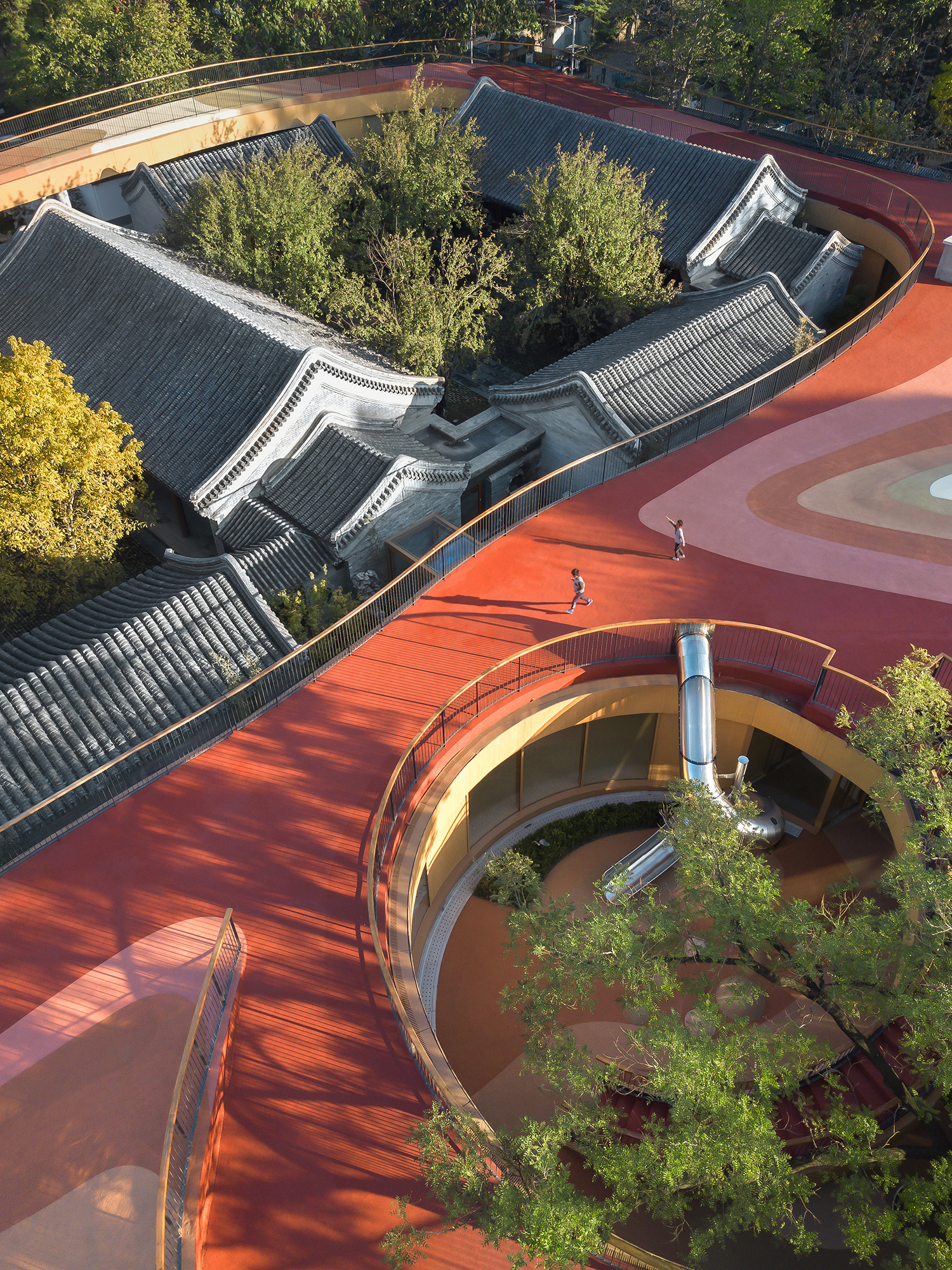 The new building forms a “floating roof” that connects a variety of independent spaces in unity, while making people feel as if they have entered a whole new realm. Apart from the red walls and yellow tiles of the Forbidden City, the architecture of Old Beijing is dominated by the blue bricks and grey tiles of hutongs and alleys. MAD’s kindergarten seeks to take people beyond this context, not just of Beijing but even of Earth; to see and imagine the long history in front of them from another time and space. 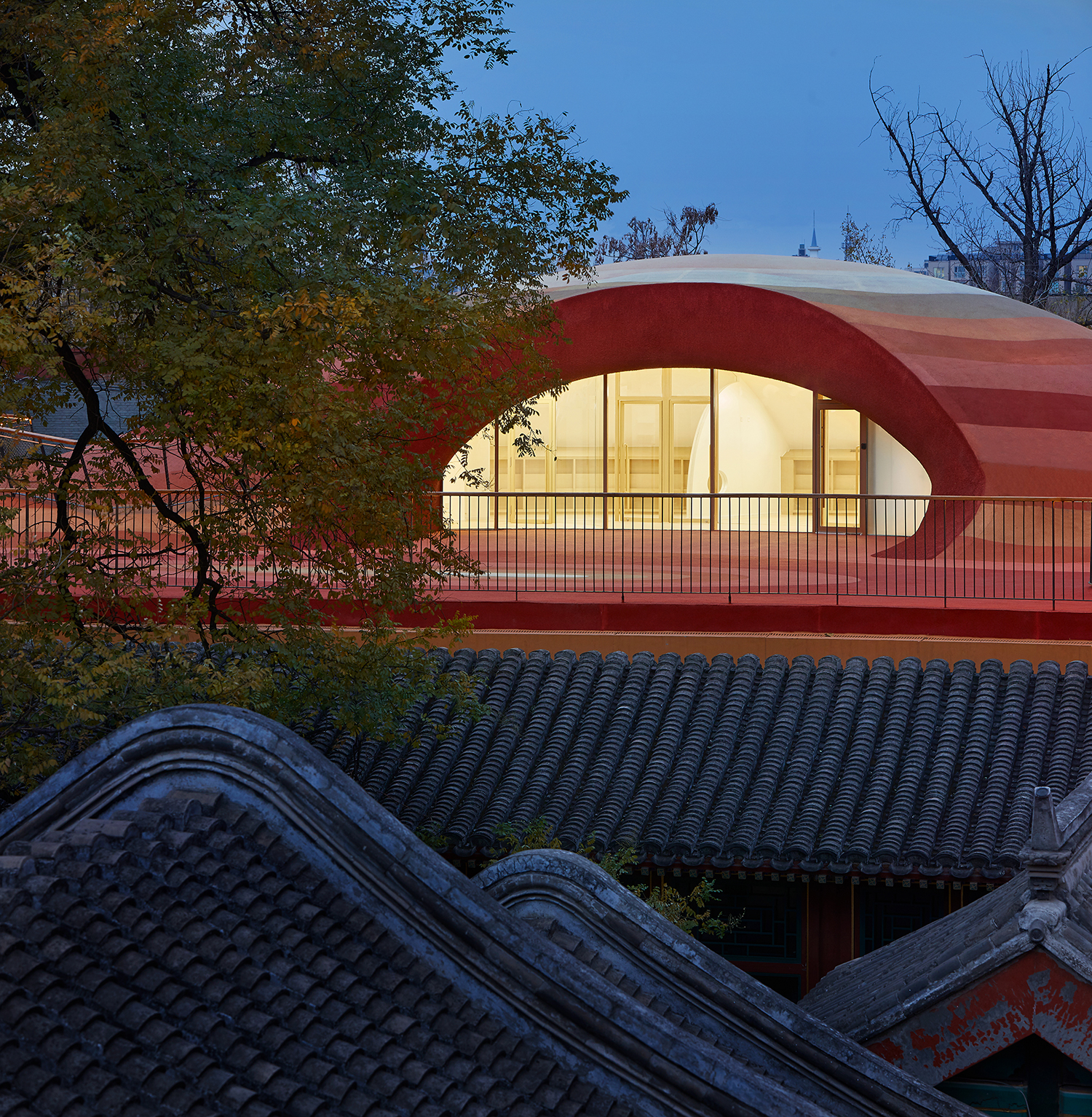 The floating roof evokes a children’s proverb from Old Beijing: “If you go three days without being punished, the roof will cave in.” The undulating ‘caving’ topography of the roof forms a Martian landscape of sorts, enticing children to run, play, and interact with it and each other. When combined with the ancient courtyard, old trees, and infinite sky, a surreal environment inspires children to think, reflect, and chase endless possibilities. 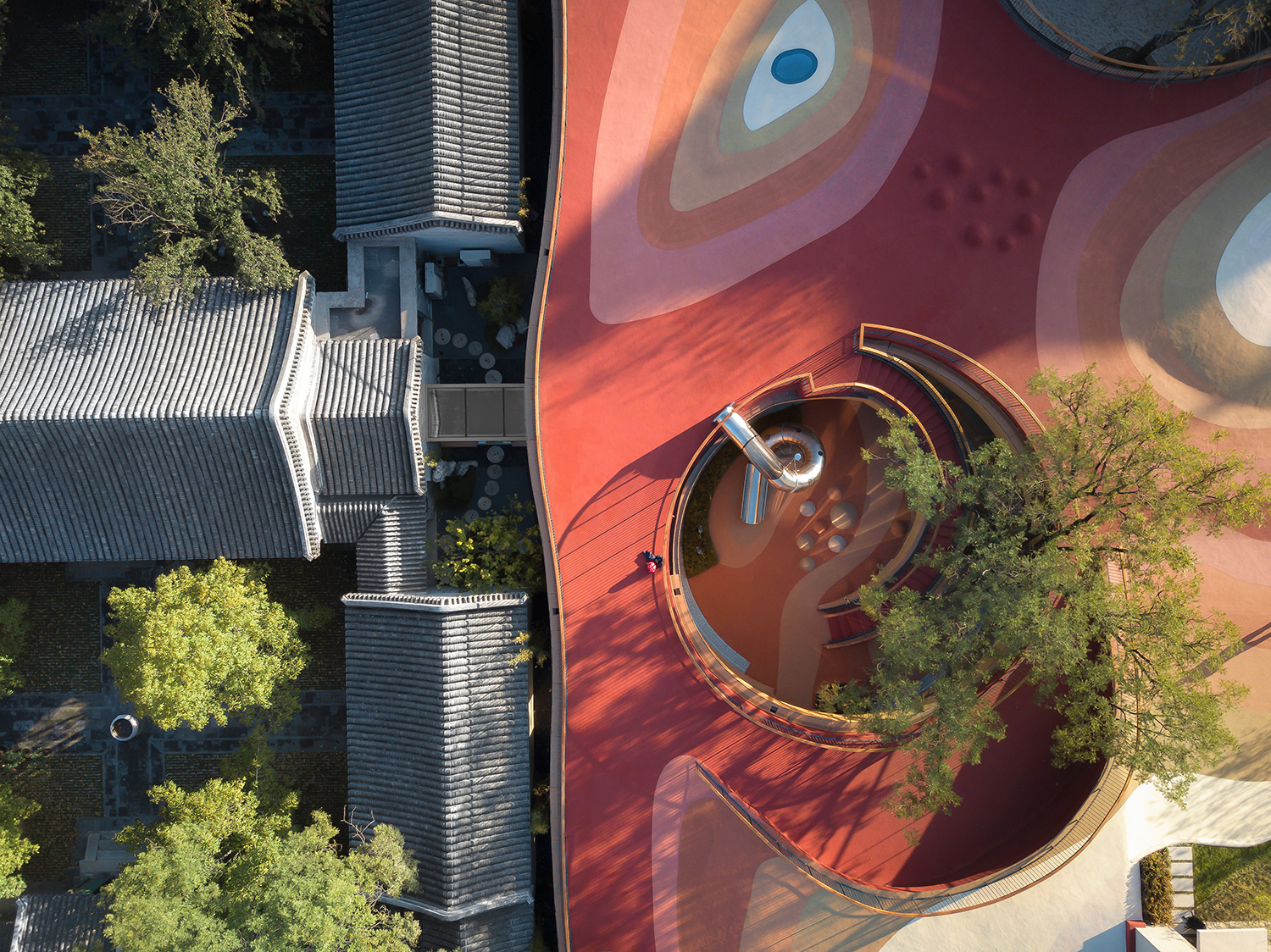 At ground level, MAD designed three courtyards around several old trees on the original site. The new courtyards correspond to those of the old Siheyuan structures, providing the teaching spaces with light, ventilation, and an outdoor extension, while slides and stairs connect the courtyards to the rooftop landscape above. 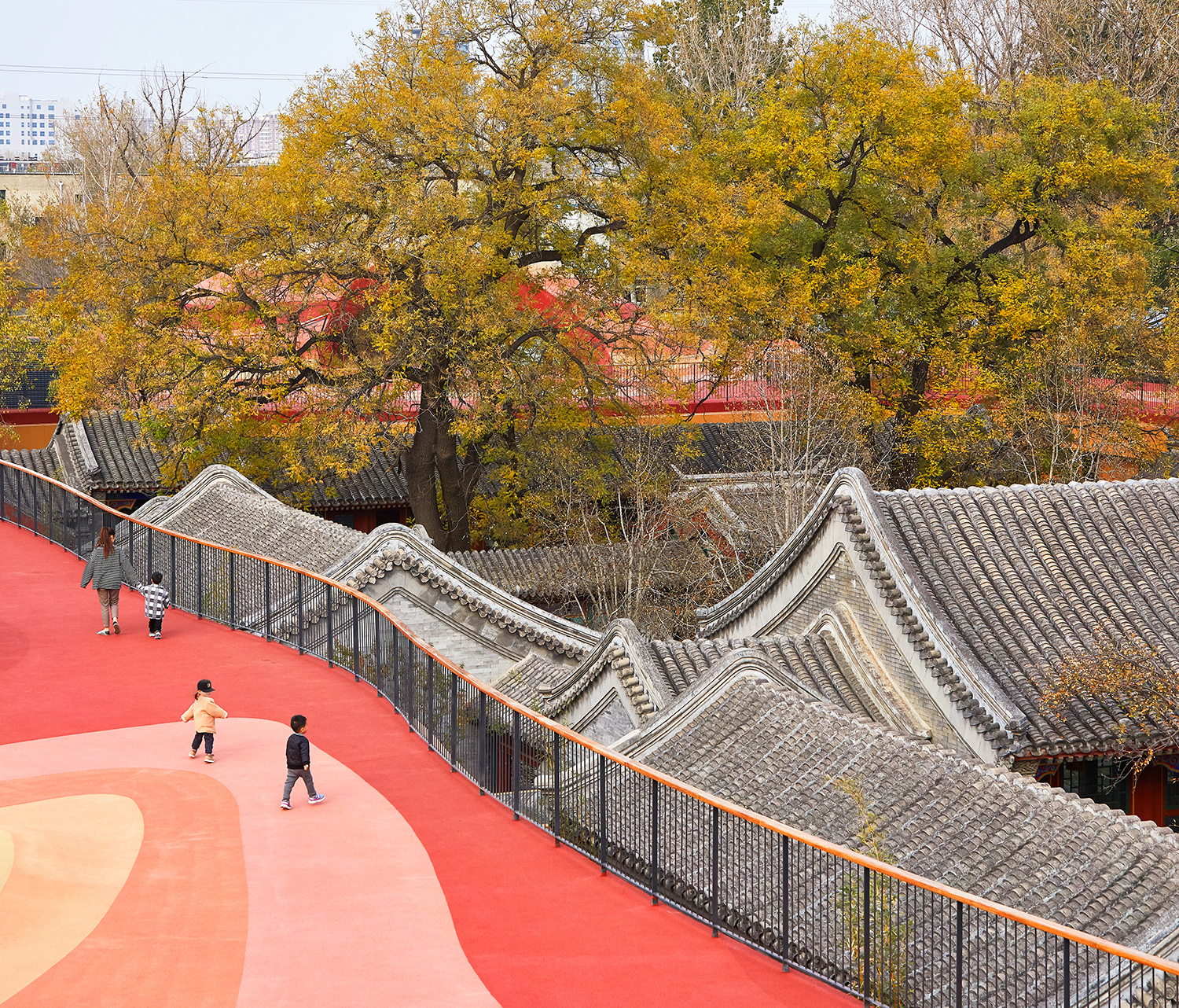 Reflecting further on the project, Ma Yansong says, “Old Beijing has many ‘cracks’ – tunnels, roofs, courtyards, etc. The courtyards, in particular, reflect an oriental view of nature. Here, nature becomes the main subject, and the architecture instead revolves around it. In the courtyard there is nature, the world, and human life, acting together to form the core of the architecture.” 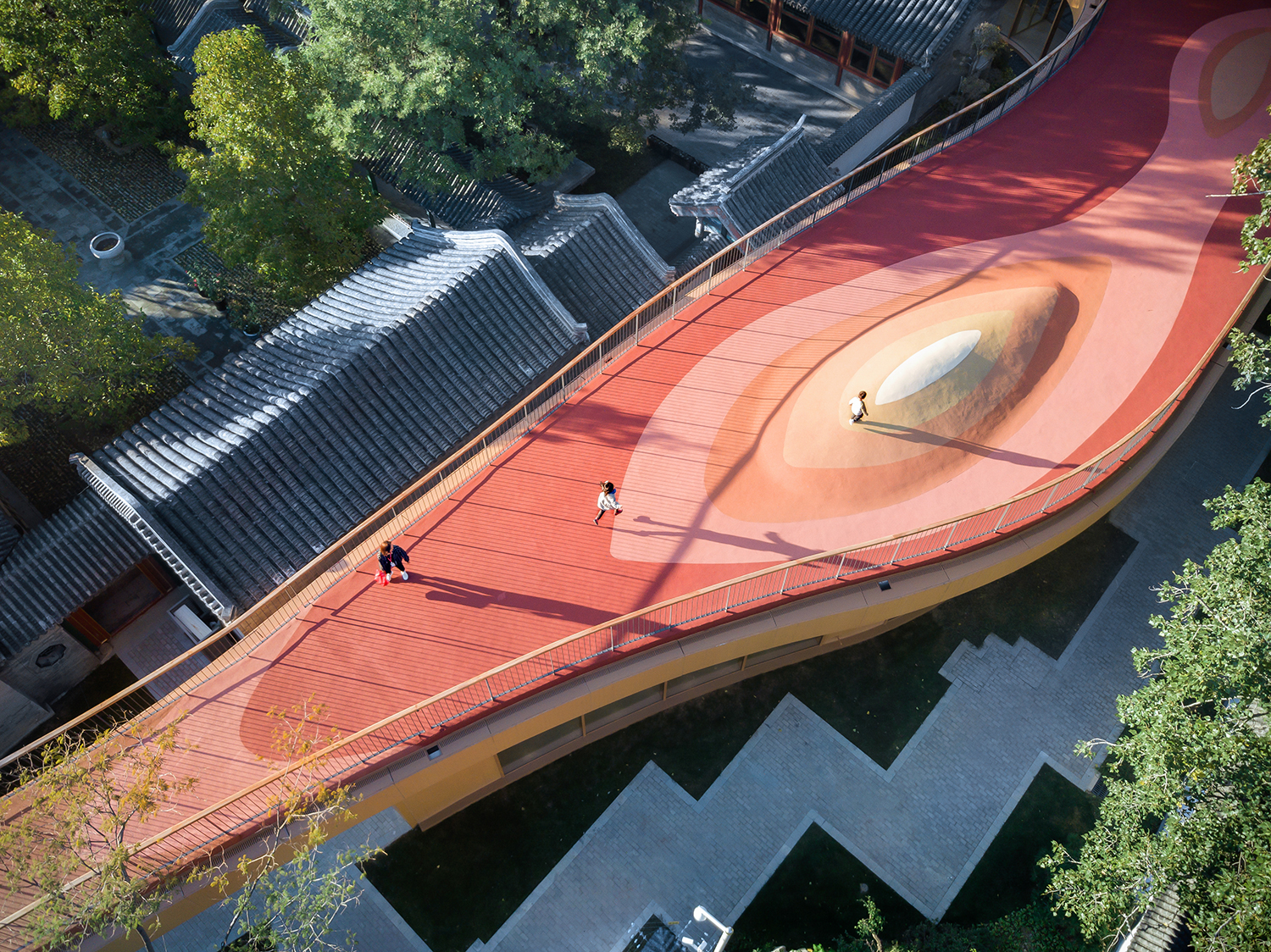 As one enters the interior from above, the atmosphere feels warm and bright. Responding to the sensitive sense of scale and comfort experienced by children, the interior of the building is suspended from a single aluminum grille, which lowers the visual height of the scheme while instilling the interior with a family-like warmth. Meanwhile, floor-to-ceiling glass walls allow sunlight to stream through the interior, while forming a visual connection with the old courtyard house. Here, the three-hundred-year linear history between the old and new buildings becomes three-dimensional. 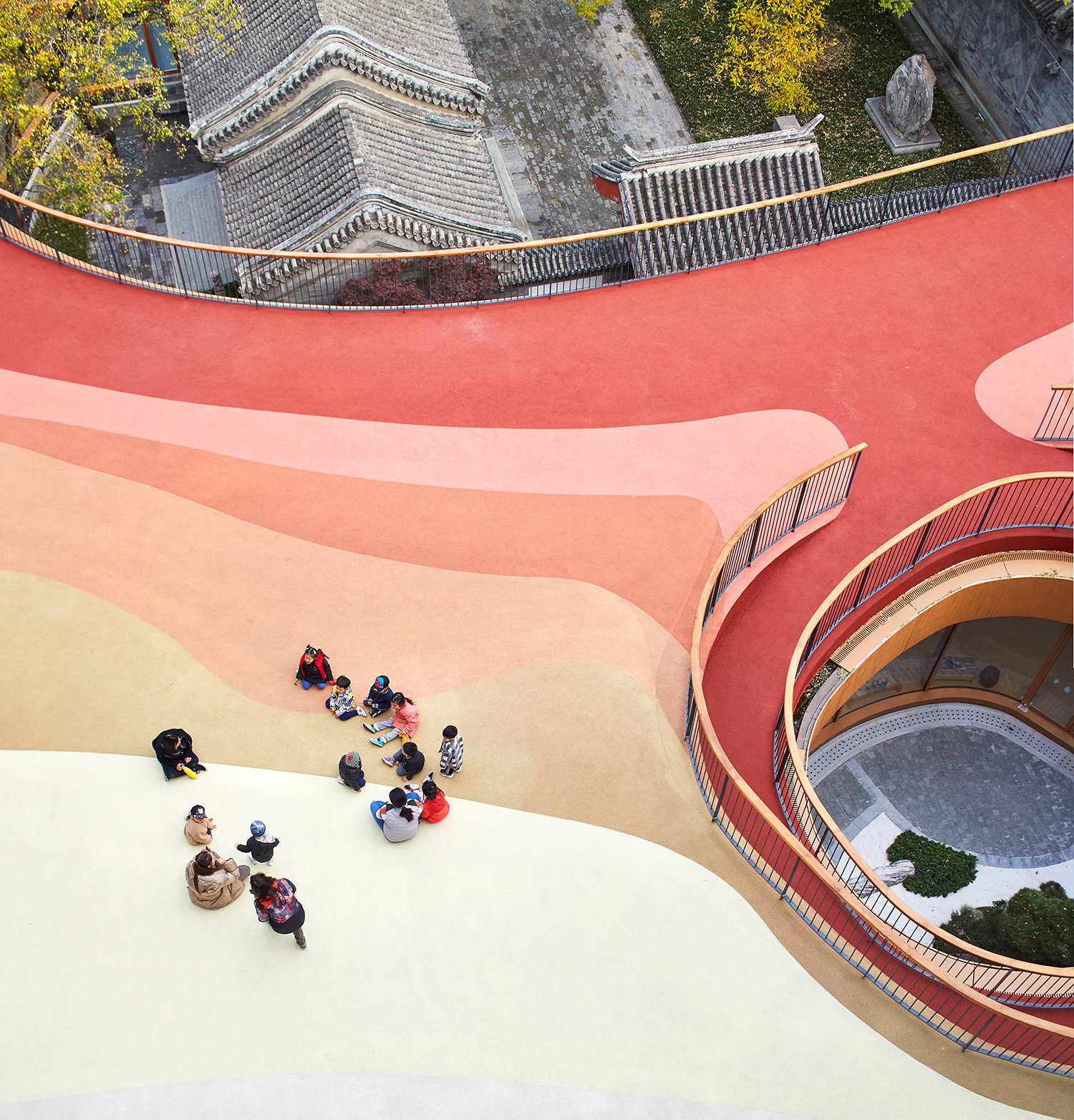 The transition space from the first floor to the sunken level on the east side of the lobby is cleverly designed as a theater; the top of which is surrounded by a circular wall of bilingual cartoon books. The theater stage doubles as the entrance to a two-level indoor playground, which serves not only as a space for children’s activities, but also a place for the whole kindergarten to hold arts and sports events. 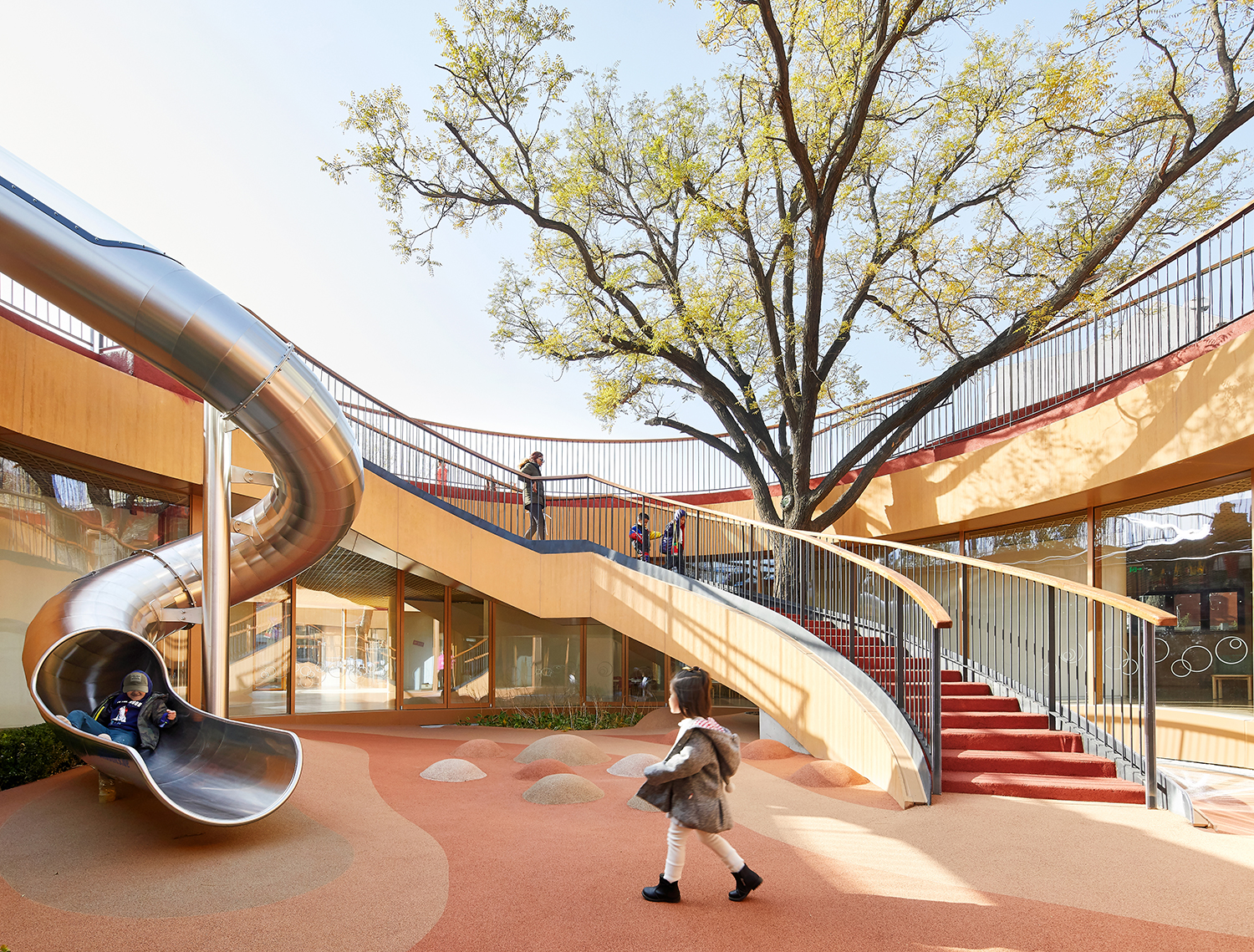 The west side of the lobby leads to a learning area, where a flowing spatial layout creates a free, communal atmosphere, and a unique density and scale. Within the learning area, the different mixed-age learning groups are not separated by closed walls, but by curved walls at regular intervals – originally a supporting structure for the building. The “borderless” learning space, ubiquitous reading environment, and curriculum focusing on learning through exploratory play, not only enriches the interaction between children, but also allows teaching and learning to take place in an optimal atmosphere. 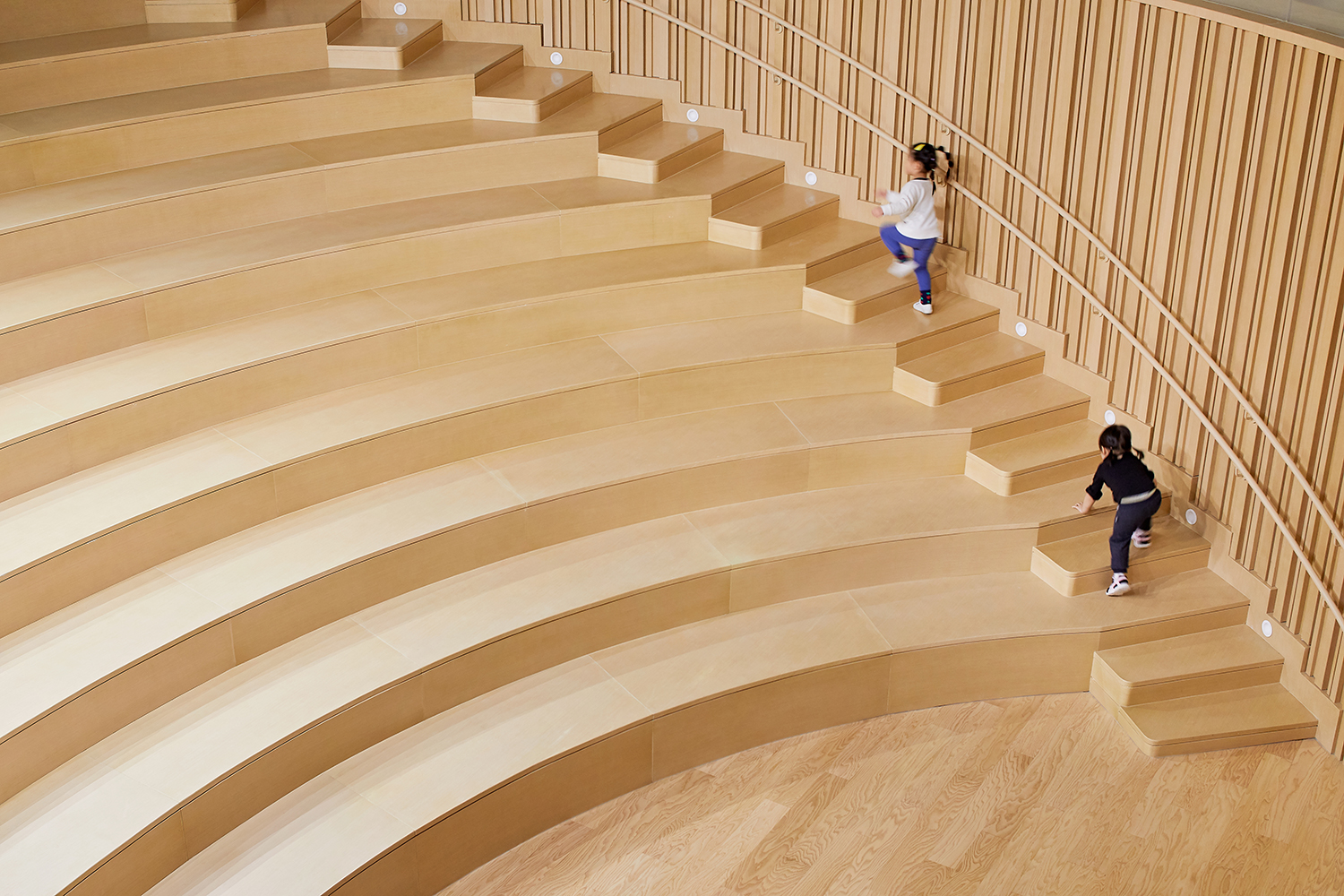 The triple-entry courtyard house, connected to the new space via courtyards and corridors, serves as a place to host the children’s extracurricular cultural, artistic, and creative activities, as well as an office for staff. The eaves and tiles of the courtyards, and the old trees contained within, are filled with a historical and natural atmosphere that is larger than the length of an individual life; a point of inspiration and reflection in the children’s minds, and a chance to deepen their understanding of history. 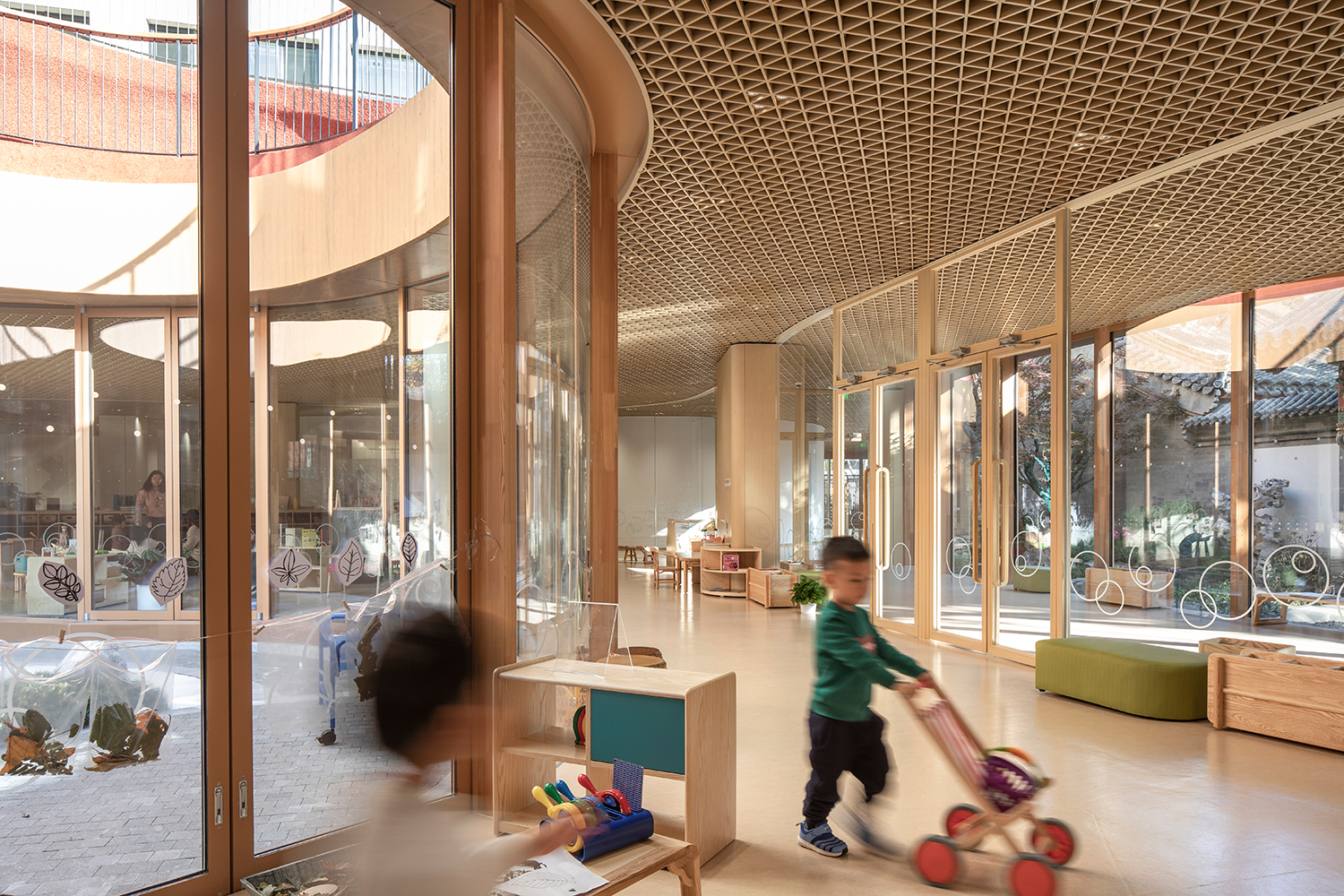 The YueCheng Courtyard Kindergarten shows how several seemingly disparate, even sometimes contradictory, elements of architecture from different historical periods can coexist harmoniously while maintaining their authenticity and individuality. What is more, they can work in unison to create a new openness and richness, giving children an objective and realistic perception of their environment. The result is an understanding of how nature and history can bring a sense of inclusiveness to a new place, shaping a community’s unique consensus and values.