Thanks to his mobile projection system, he created ephemeral digital frescoes, illuminating the buildings and facades of the city’s emblematic neighborhoods. With his characters half-human, half-animal directly inspired by the signs of the Chinese zodiac, he turns away the codes of Hong Kong’s fashion, mixing Street Art and live digital show. 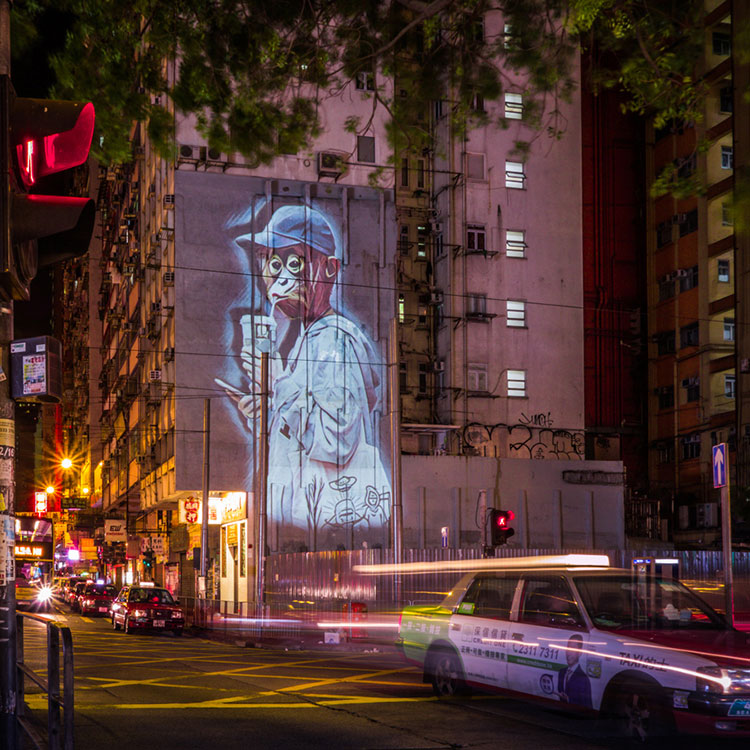 Renewing the digital performances of his Safari Urbain, the series of anthropomorphic animals projected in street-mapping on the walls of Paris, Orlando, Madrid and Stockholm, this time, it’s inspired by the traditional bestiary of the Chinese zodiac, he has been performing under the eyes of the inhabitants in some emblematic districts of Yau Ma Tei and Mong Kok. 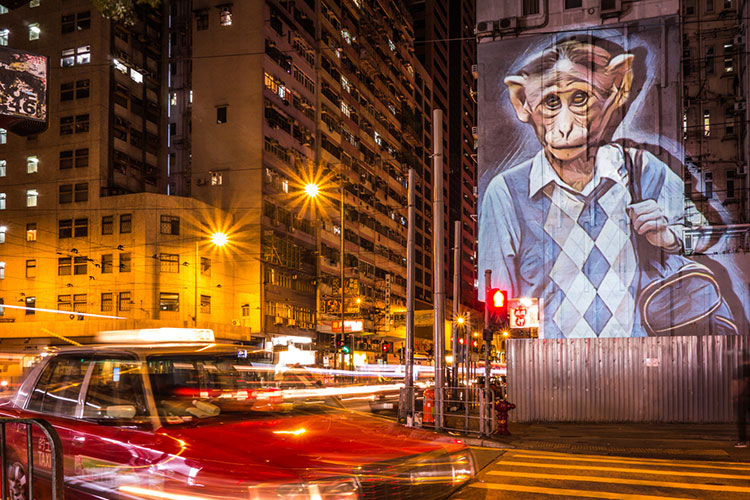 The twelve signs of the Chinese zodiac are therefore incarnated in the inhabitants of the districts of Hong Kong, that became in a certain way actors of the project by creating a story on the walls of the city. Indeed, Julien Nonnon’s photos, between fiction and documentary, are the traces of this fabulous narration that he orchestrated during these nocturnal walks with his mobile projection device. 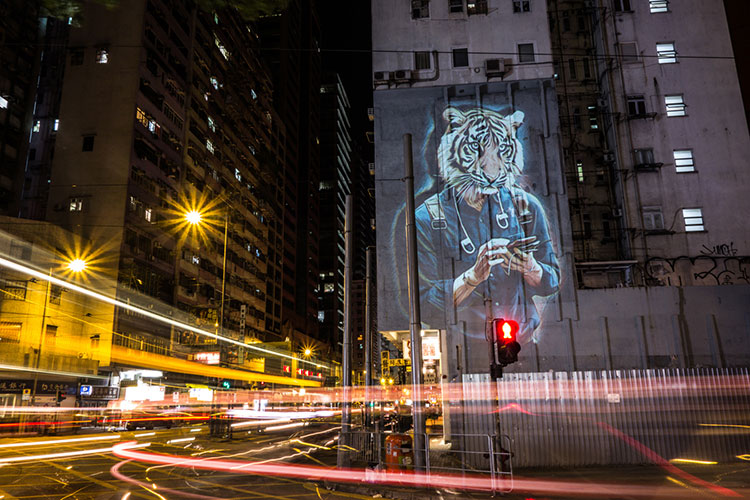 If the architecture of the city, its shape, its stratifications, the epidermis of its buildings, the objects, the moving and fixed signs symbolizing the identity and the spirit of his artwork it’s also, determines its choice for the video-spot locations. 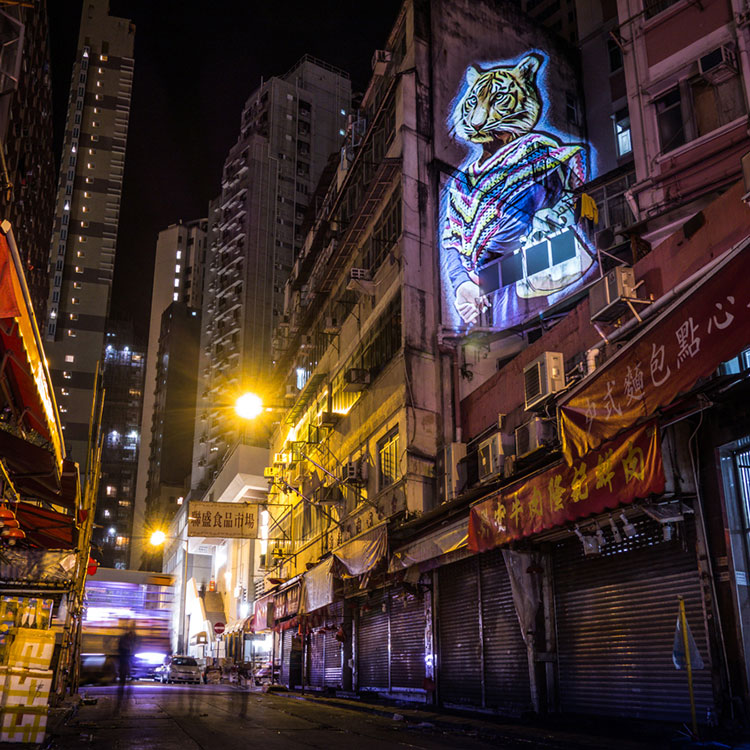 Julien Nonnon is also on the lookout for the energy which create an animated urban space. An open event which promotes sharing and meeting with his nocturnal digital performances that are first of all strolling through the city’s neighborhoods and an invitation to onlookers, to discover the bestiary of his fables immersed in the urban space. And they go according to a poetic safari, embracing the steps and gestures of the artist, capturing the images of these ephemeral apparitions. 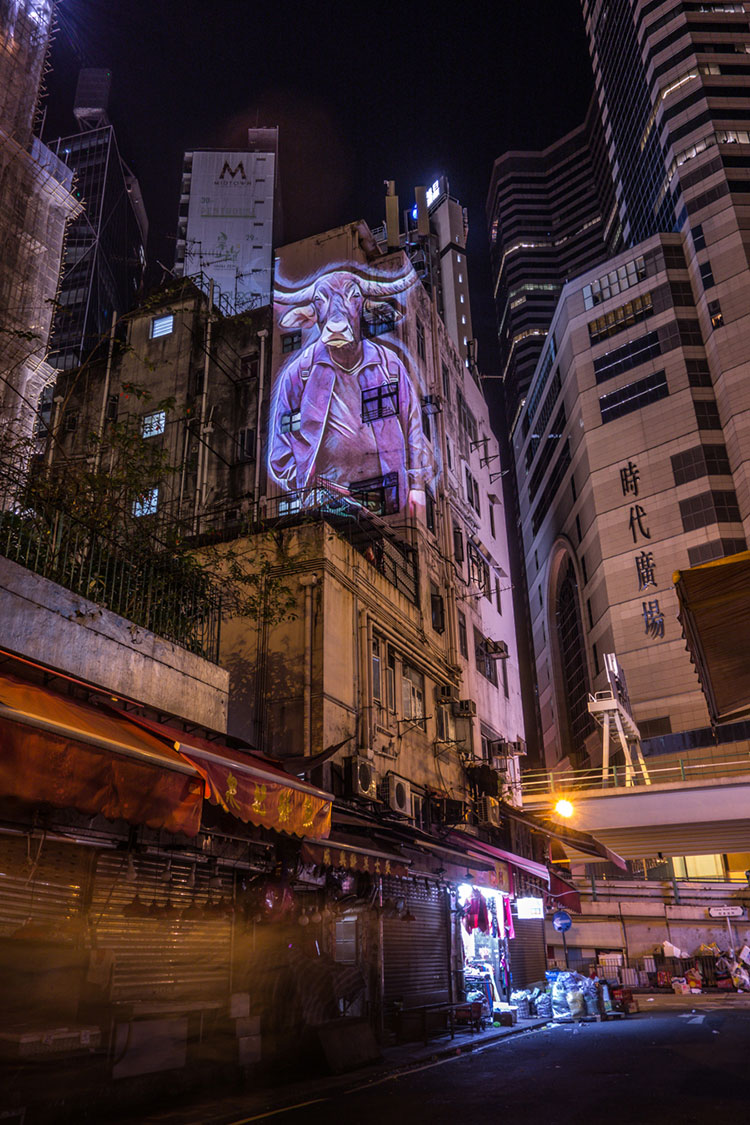 Invited by « Alliance Française » who orchestrated the Hong Kong Urban Safari, Julien Nonnon returns to the public, as he had done for his previous events, the photographs of these moments: captures both the projected image and immersed in the urban fabric, these shots restore the dynamic and interaction between projection and its support. 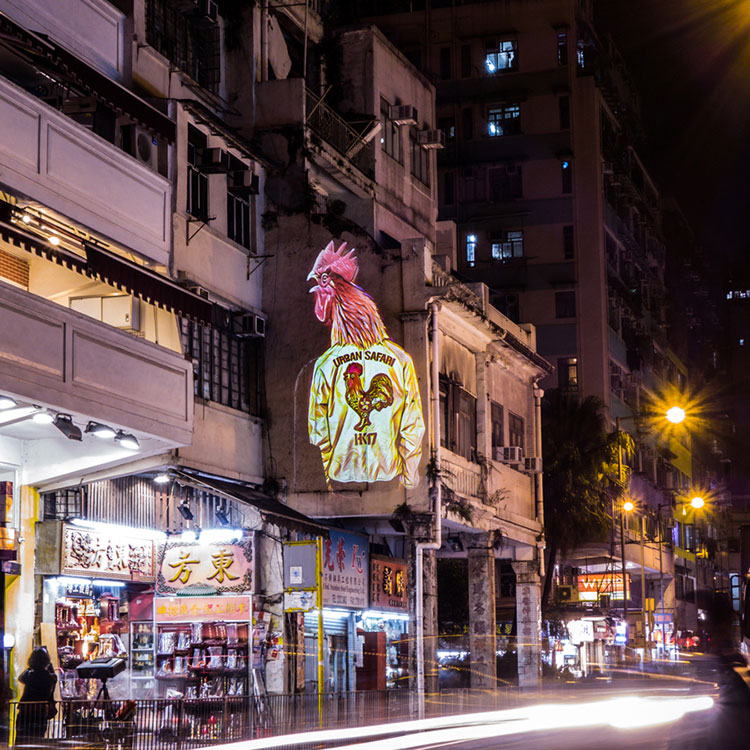 This double temporality is a constant in the work of the artist: the moment of the performance, its event and the ephemeral dimension are always doubled by a photographic memory of the image and the place, the image in the place.

Because with street-mapping, Julien Nonnon invites the public not only to an unusual light show of his creatures but to the rediscovery and reappropriation of the places where he makes them arise. This last issue was particularly important in Hong Kong where he had privileged traditional and popular neighborhoods, in suspension considering the fact of the hyper- modernization of the city. 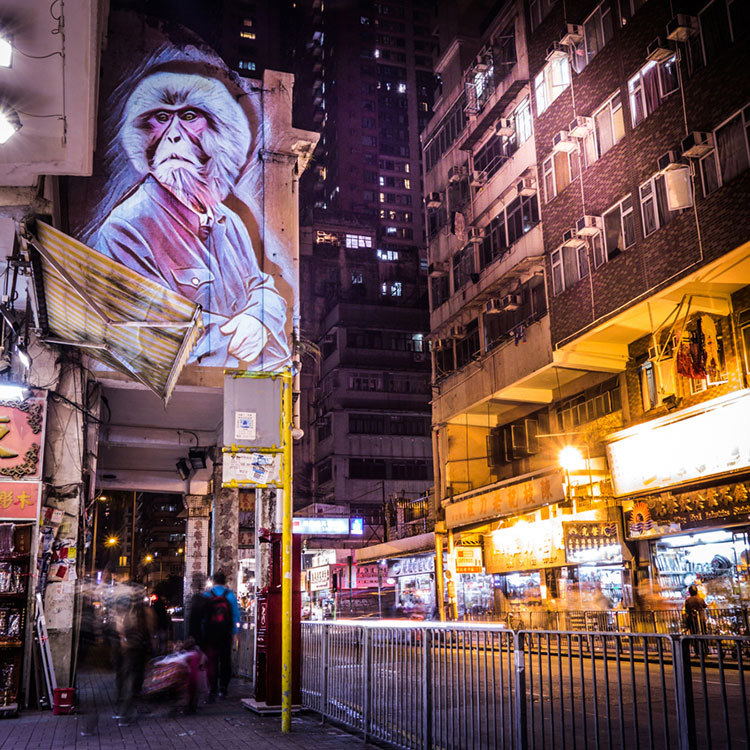 Borderless, without frame, the half-animal half-human gures of Julien Nonnon, are everywhere and for all, they are in the city, they populate it. Familiar or fantastic, the animals of the Chinese Zodiac have their bodies dressed like the people of the neighborhoods who have been observed and photographed upstream, walking the streets, immersing themselves in the crowd. Attitudes and looks, under the generic mask of the zodiac sign, it is a portrait of the inhabitants which is added to that of Hong Kong. 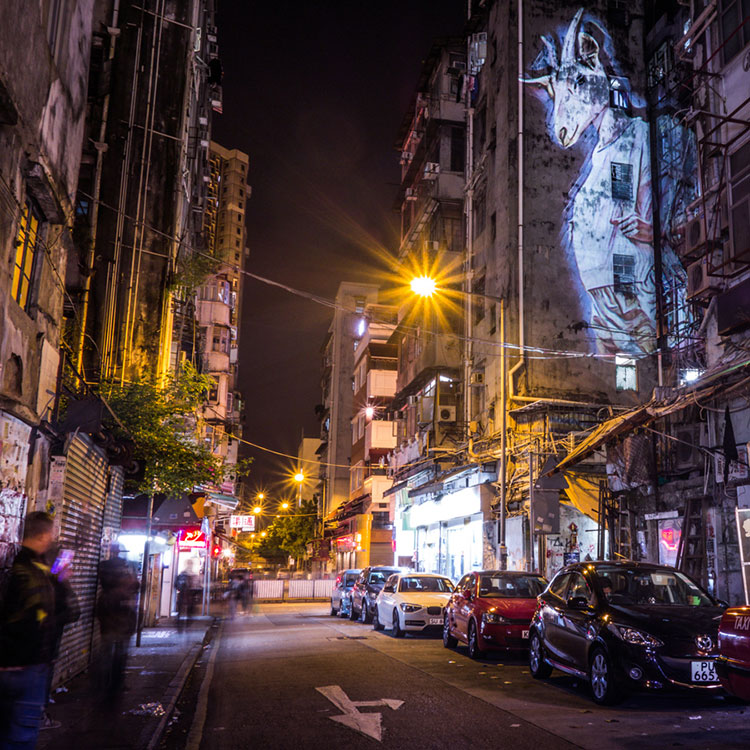 Graphically designed in a resolutely urban style that fits between realism and the schematization of graffiti, the images of Julien Nonnon merge an imaginary, a mythology, a fantasy and the familiar body of those who carry their memory here and now. 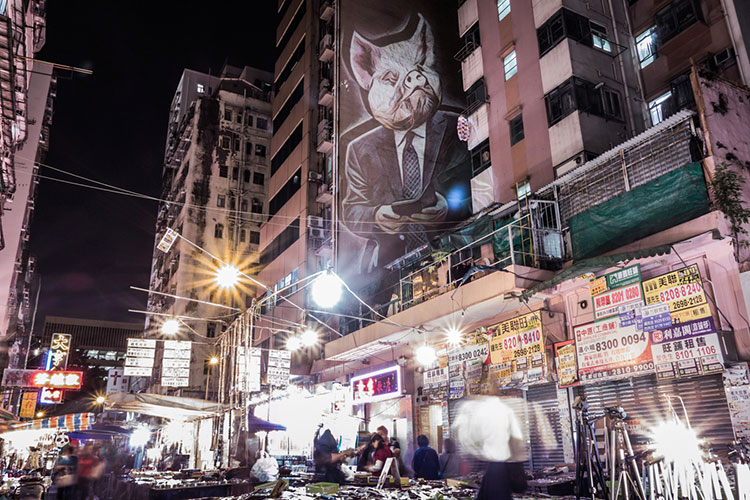 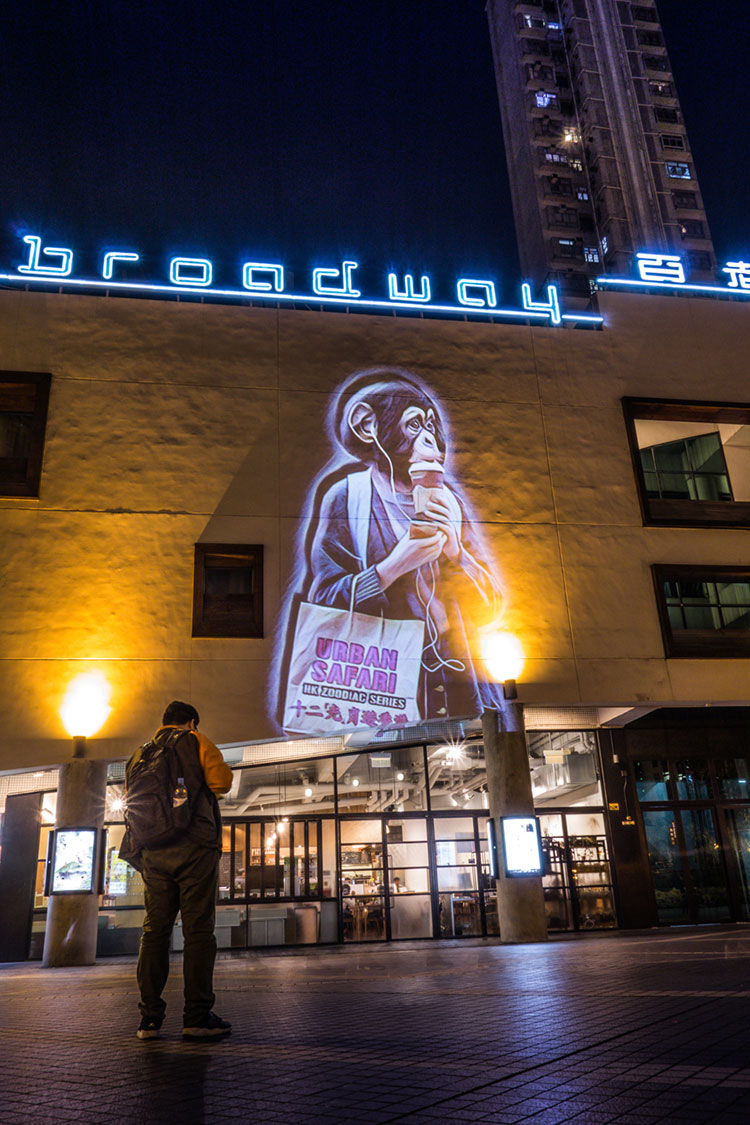 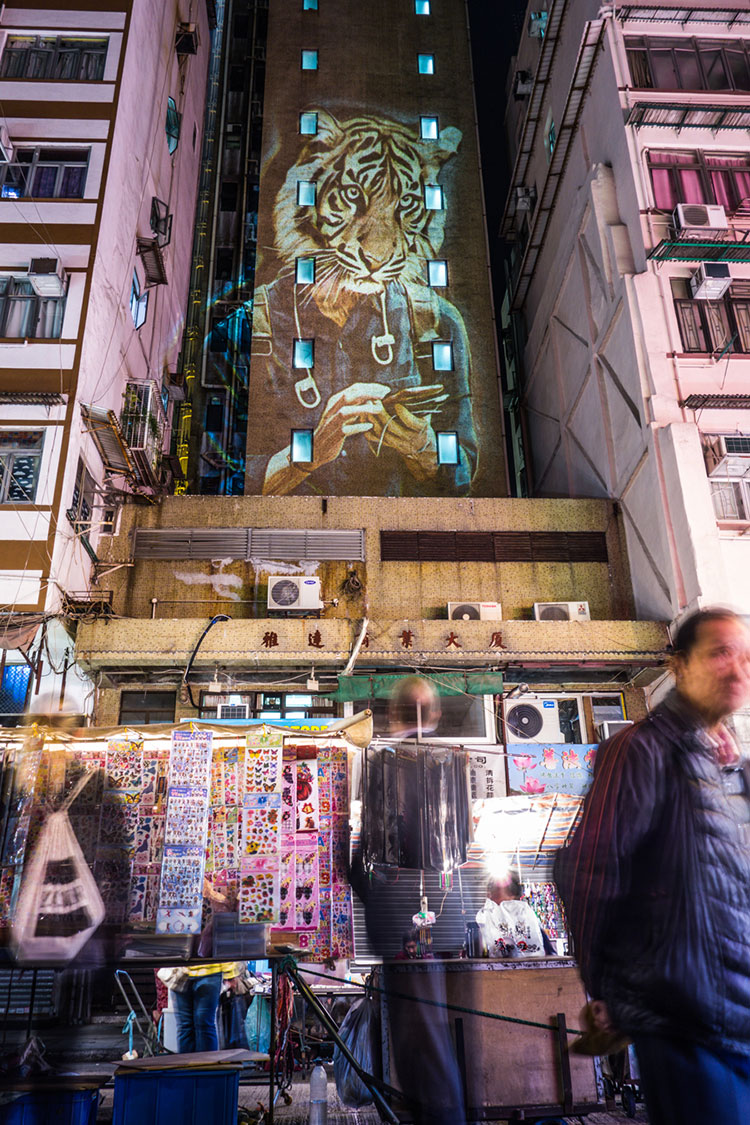 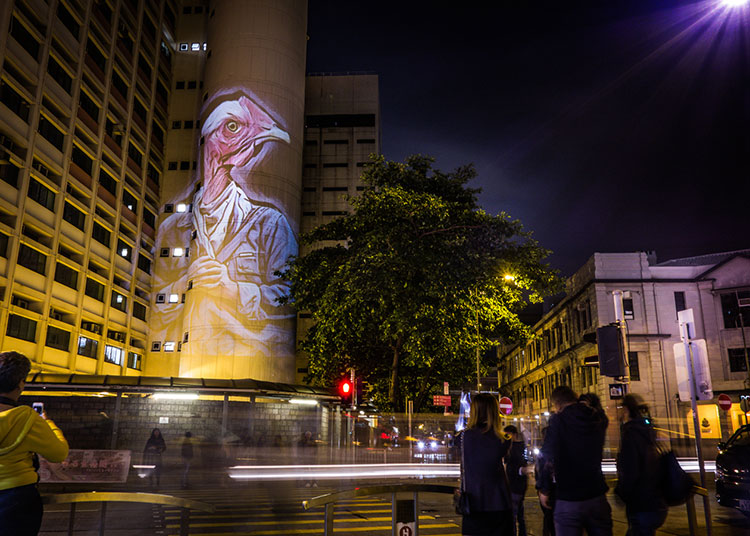 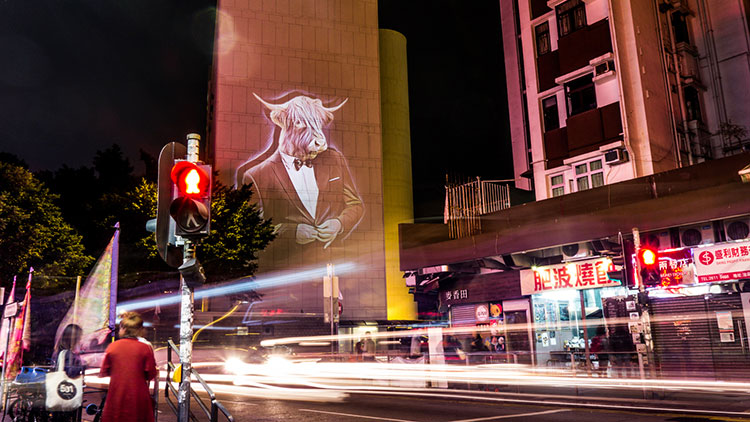 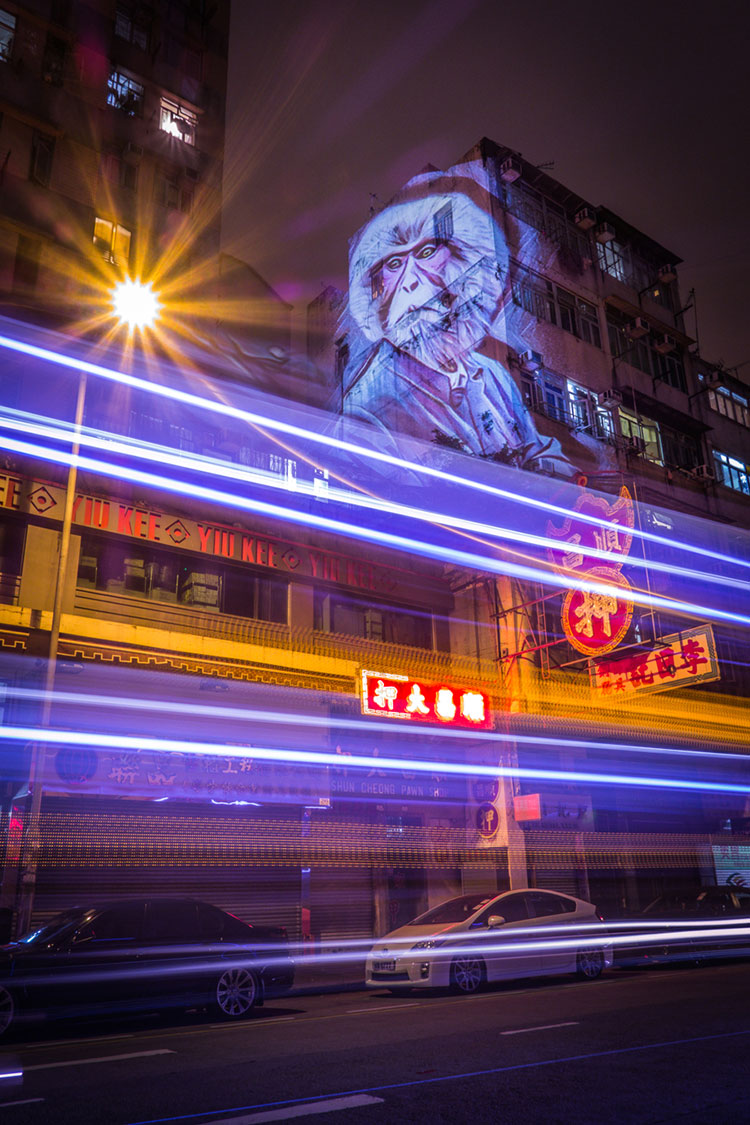 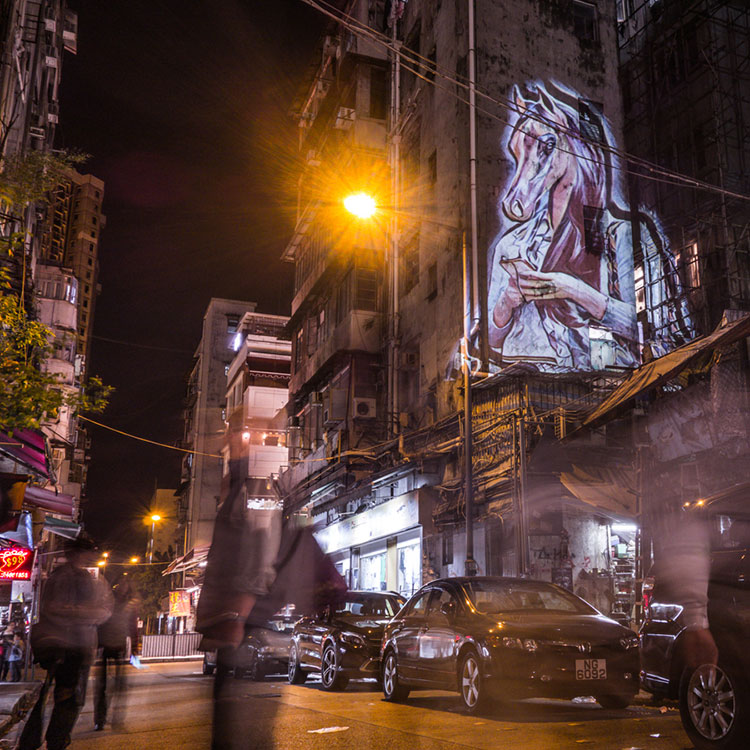 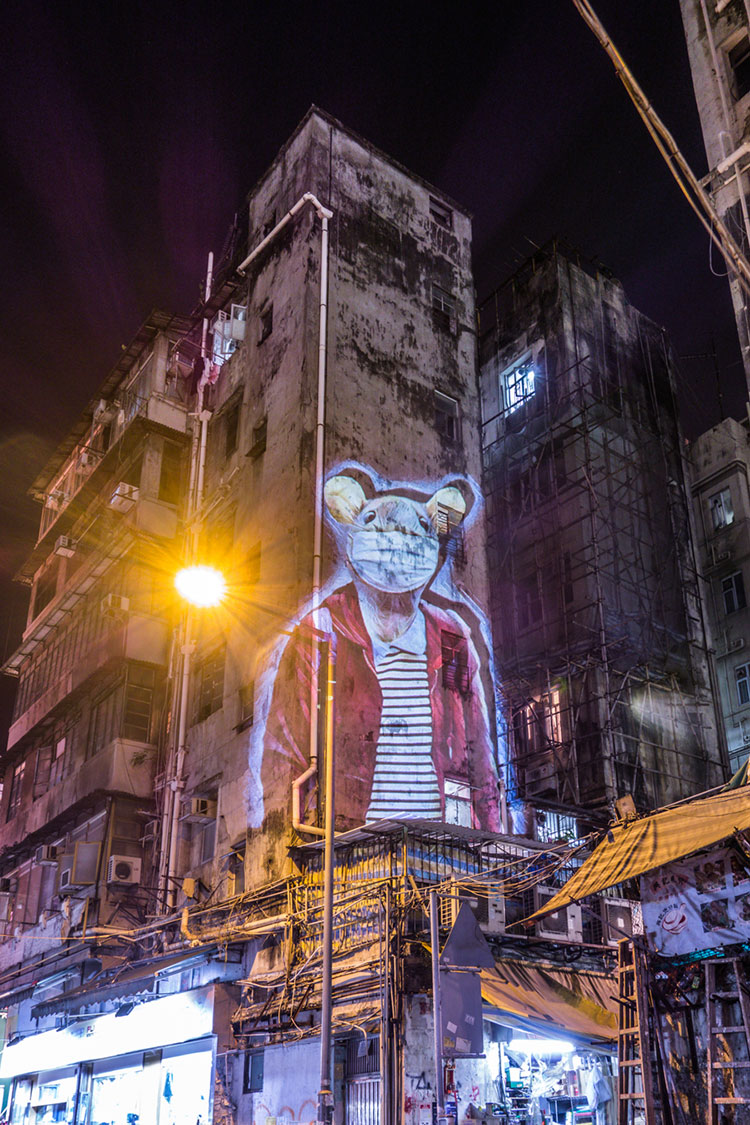 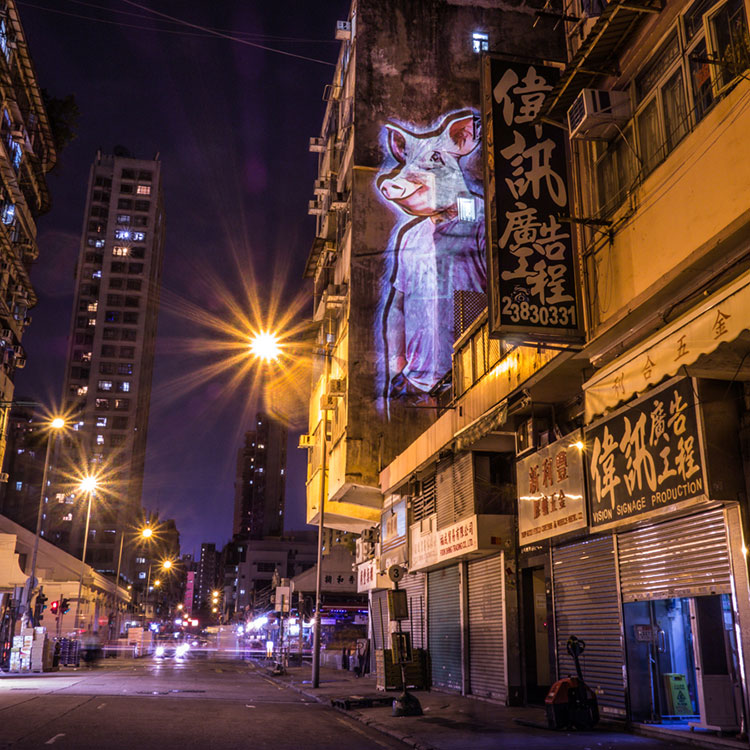 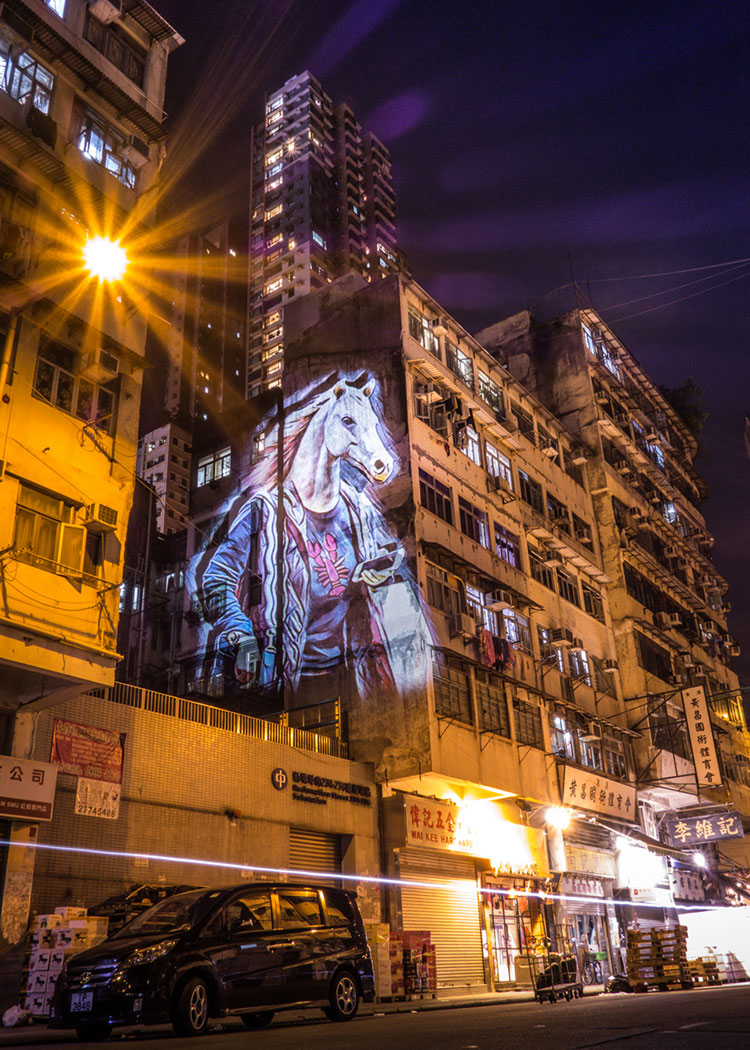 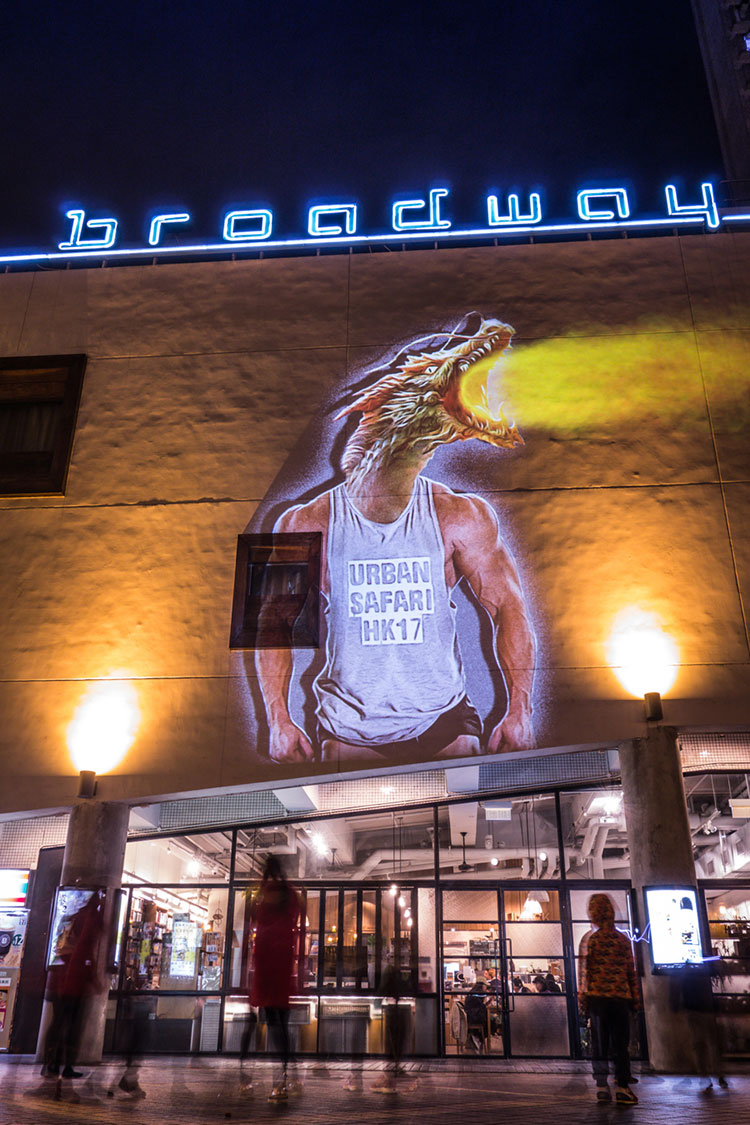 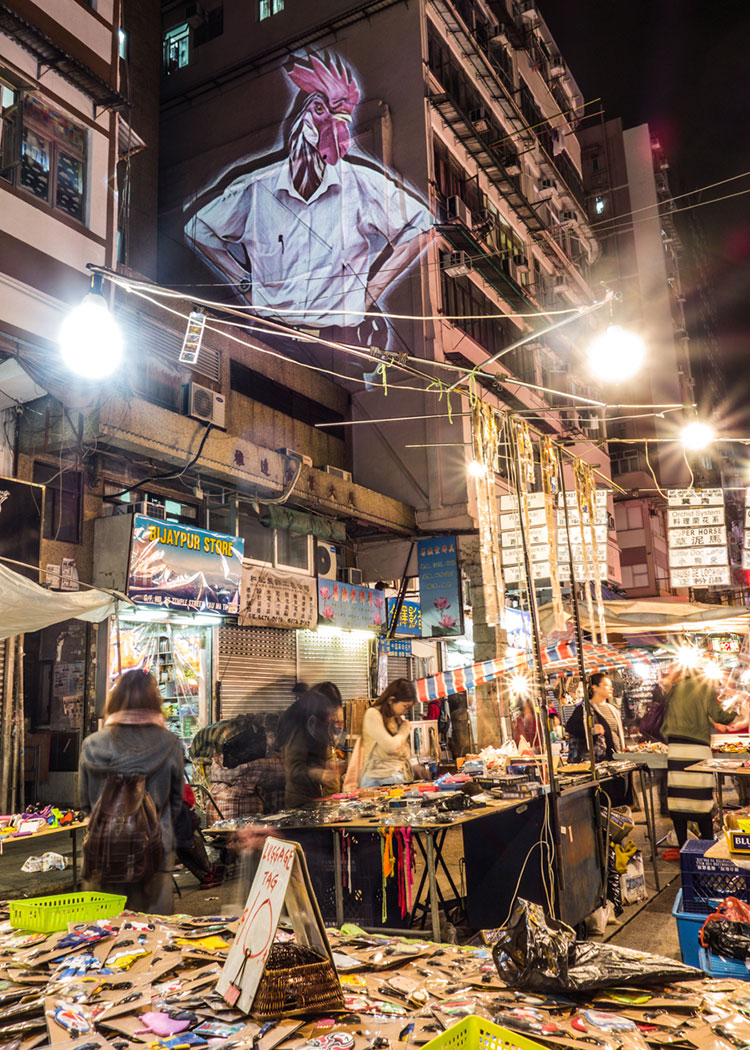 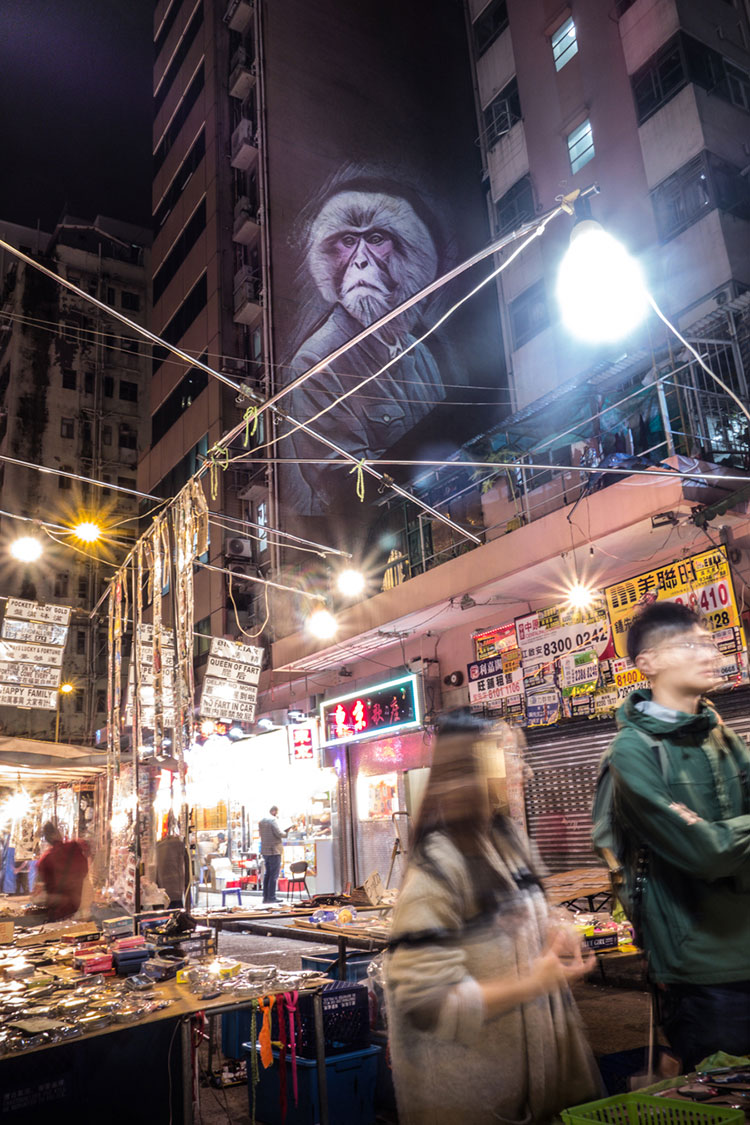 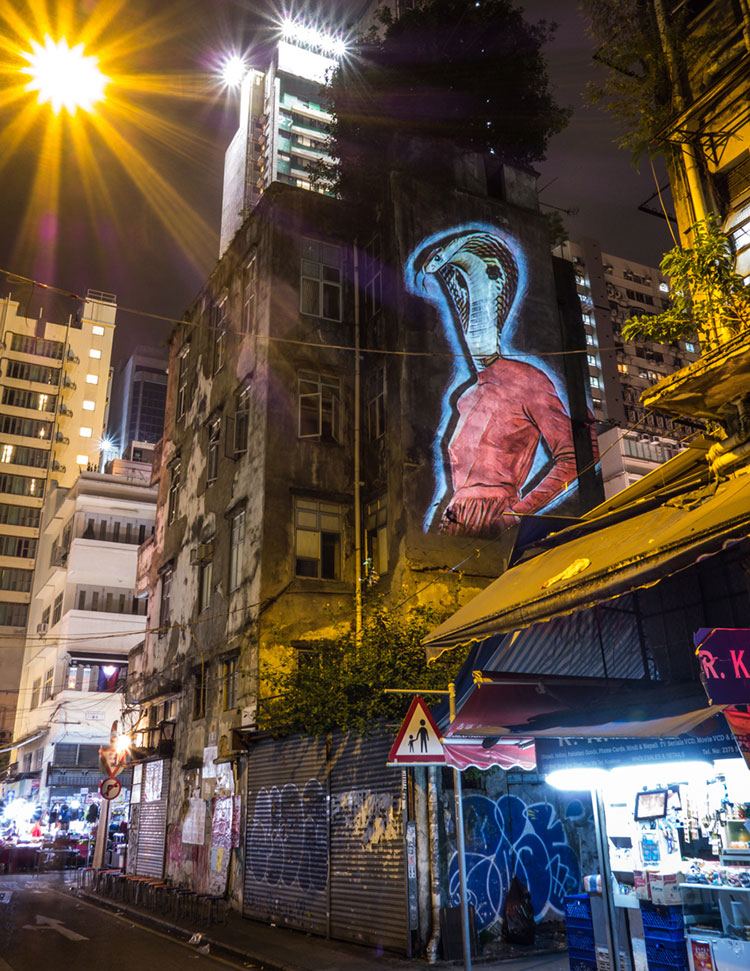 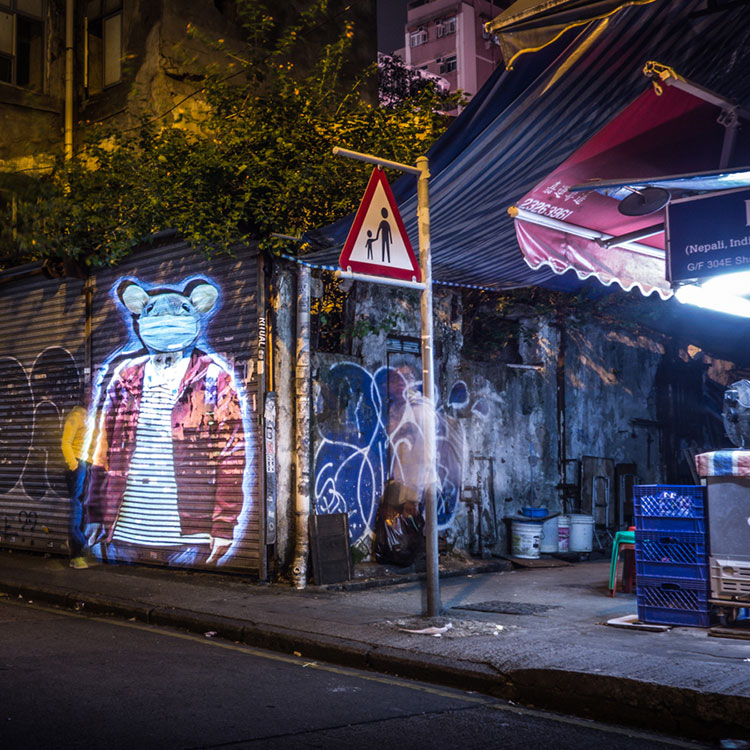 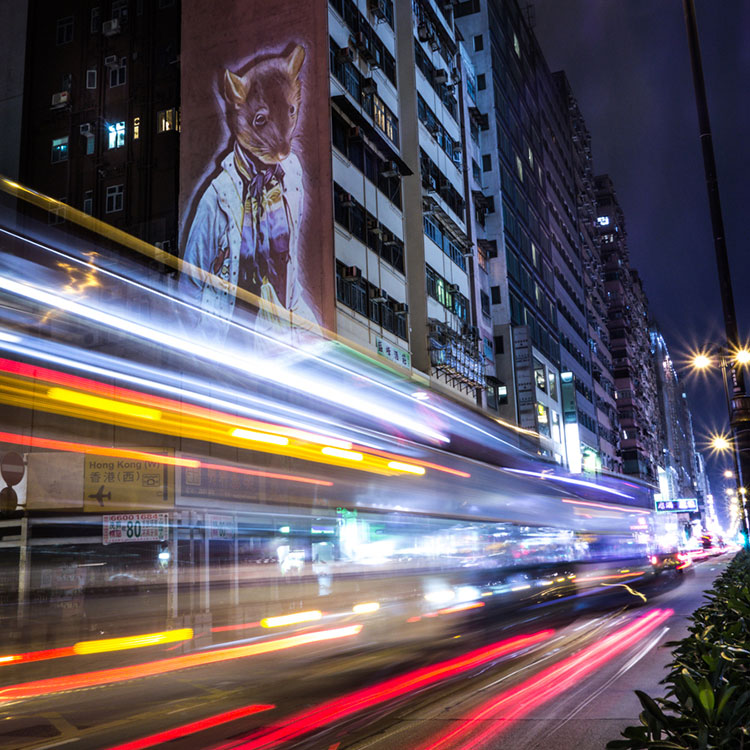 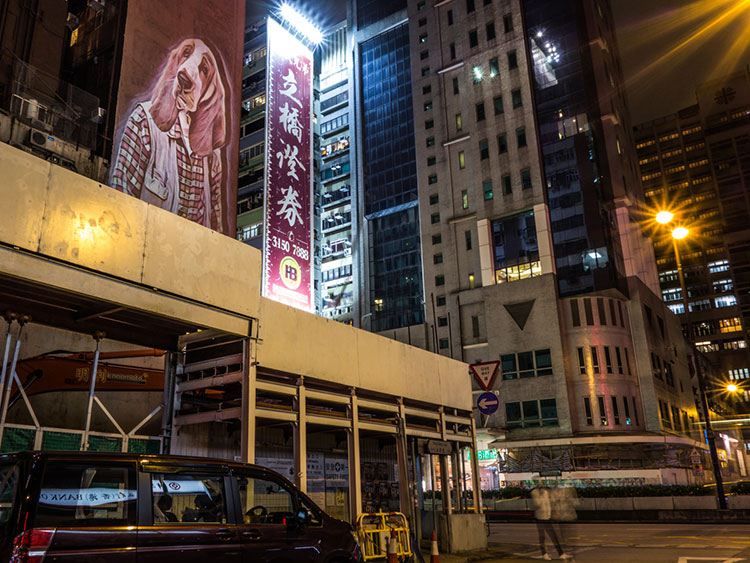 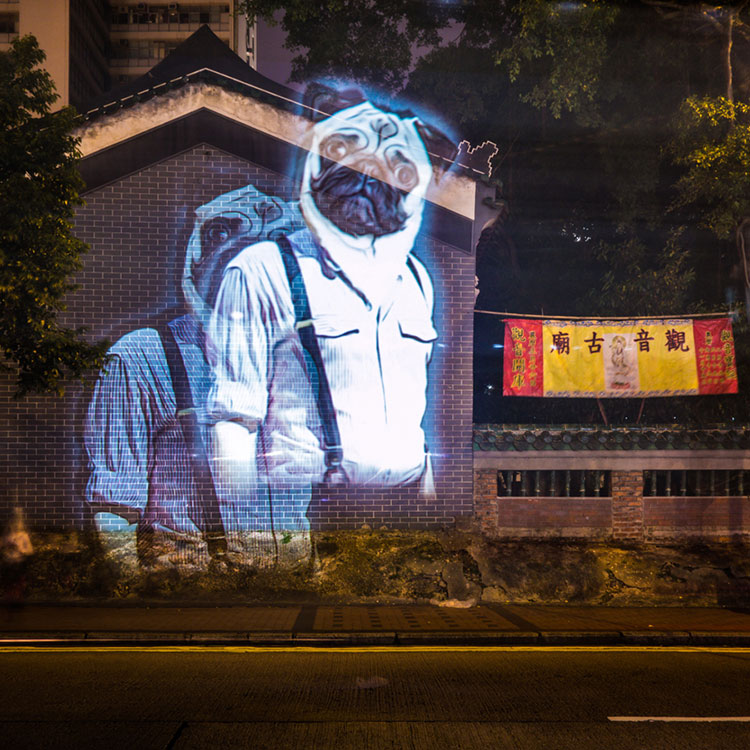 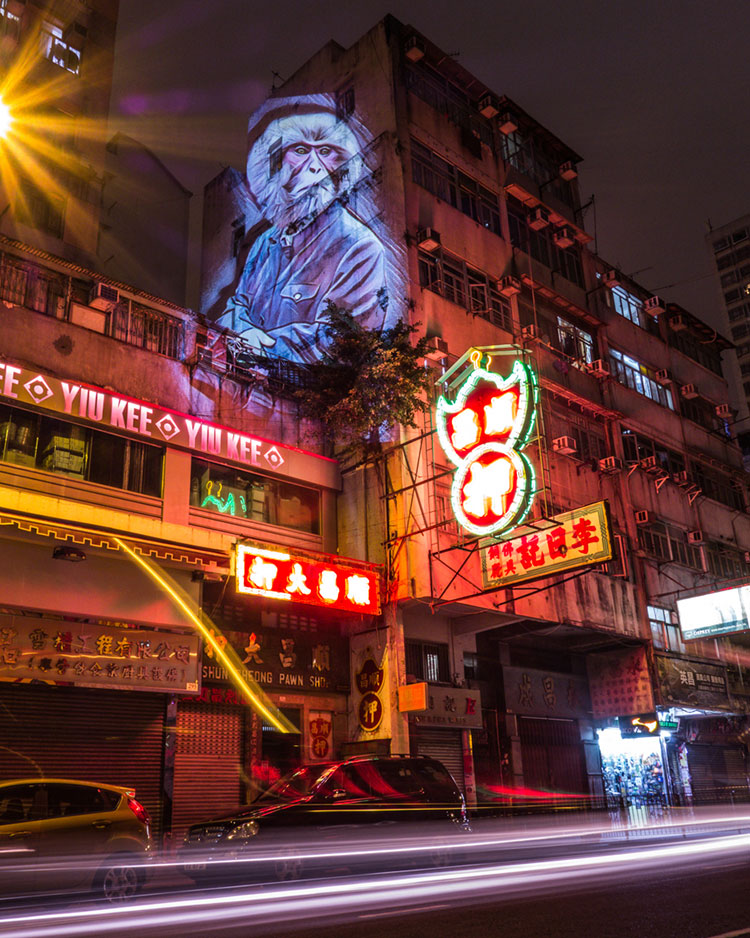