Created by French firm atelier YokYok, The Cube is an anamorphic object playing with perspective. Based on the anamorphosis concept, it creates an optical illusion once it is seen from a precise point of view. Th e artwork comprises a multitude of volumes scattered in space.

When one is looking at it from the right point, its volumes merge together to form a whole. But conversely, when one is moving away from the looking point, the Cube decomposes itself in several elements. The movement of the watcher makes the construction or deconstruction of the Cube. 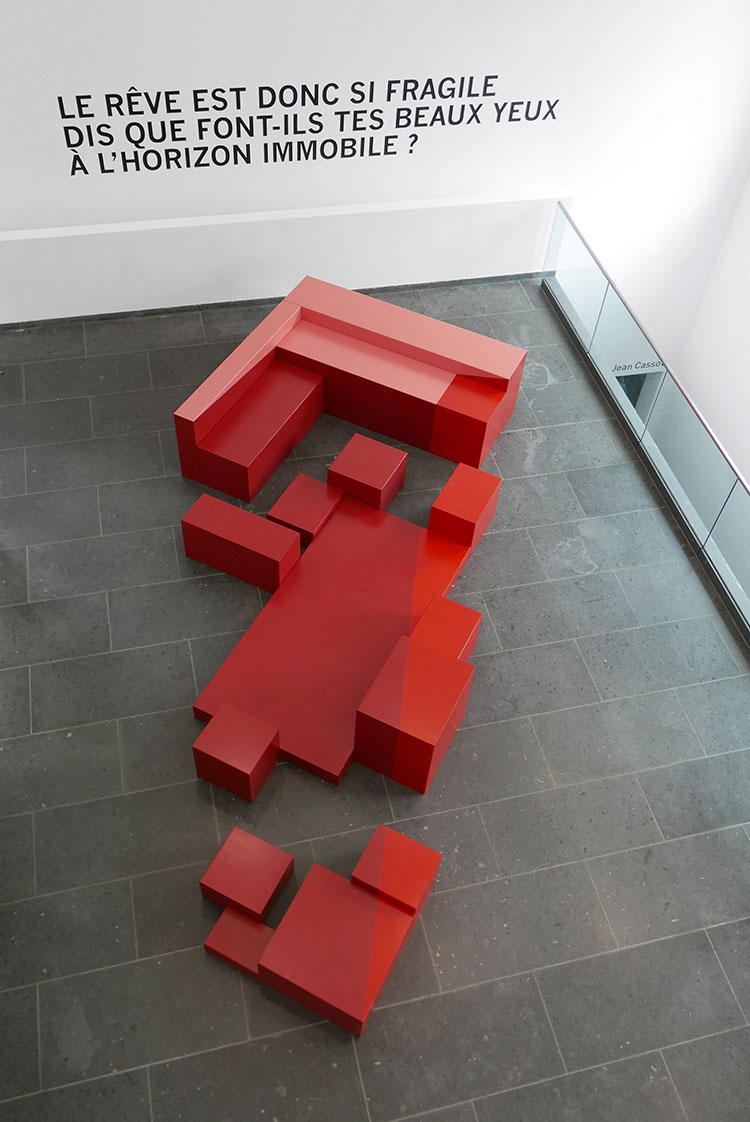 Designed at human scale, these box-shaped volumes have a furniture use. Between art and architecture, the Cube is conceived as a useful and functional artwork that the visitor may appropriate.  This appropriation, combined with the optical illusion of anamorphosis leads the human body to be part of the artwork and to become the subject of a play of perceptions. Placed at different distances from the observer, people sitting on the volumes of the Cube then appear inside the perspective of the simulated cube and are perceived at different scales. 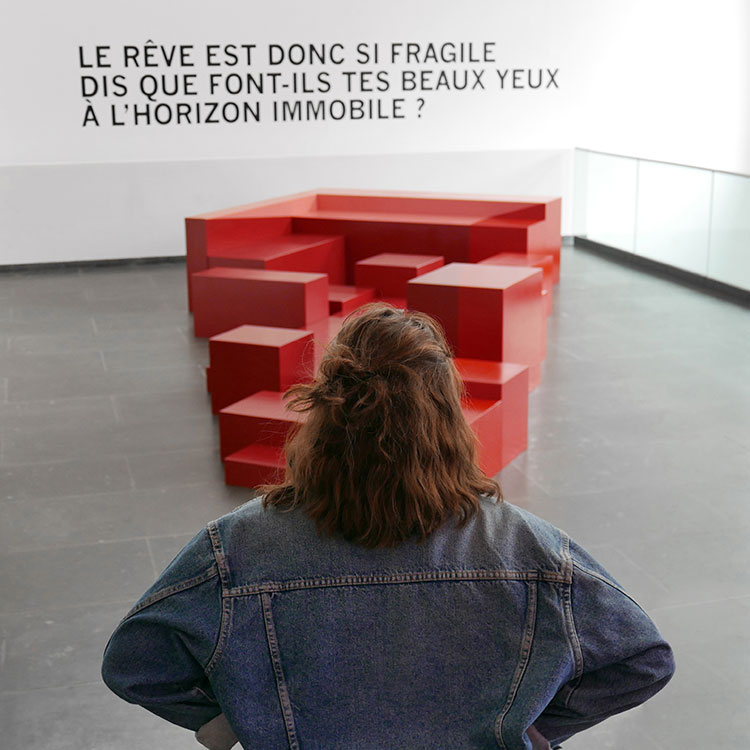 Conceived as an illusion artwork, the Cube is a pure three-dimensional gymnastics object. Playing with geometry codes, the Cube hijacks formally the icon of the most remarkable solid. The cube or regular hexahedron, one of the five Platon’s solids and polyhedron by excellence is here hijacked. It is subjected to a spatial stretching, becoming implicit. In common with contemporary artists as Georges Rousse or Felice Varini, YokYok finds its way in the artistic history of the anamorphosis by working with volumes. 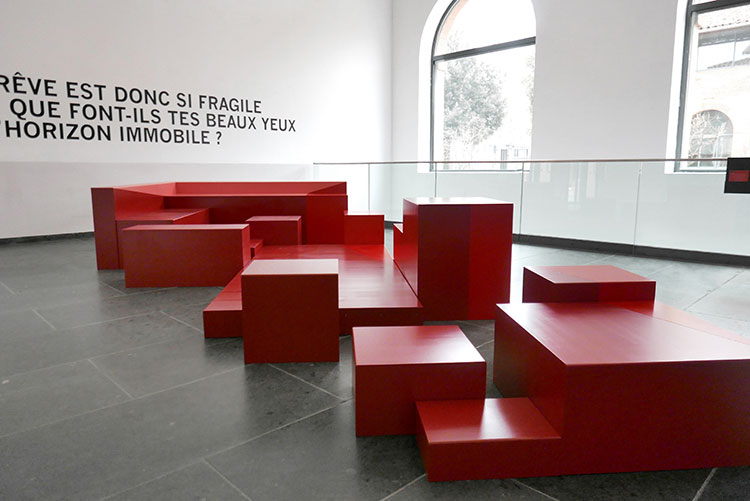 Trough this hijacking idea, the Cube acts as an object challenging reality. It disturbs sensitively the perceptions, invites to an experience and lets one imagine new perspectives.  It can be added to these exterior perceptions of the object and its shape – which reminds the symbol of the contestation of May 68 in Paris – a collective use. 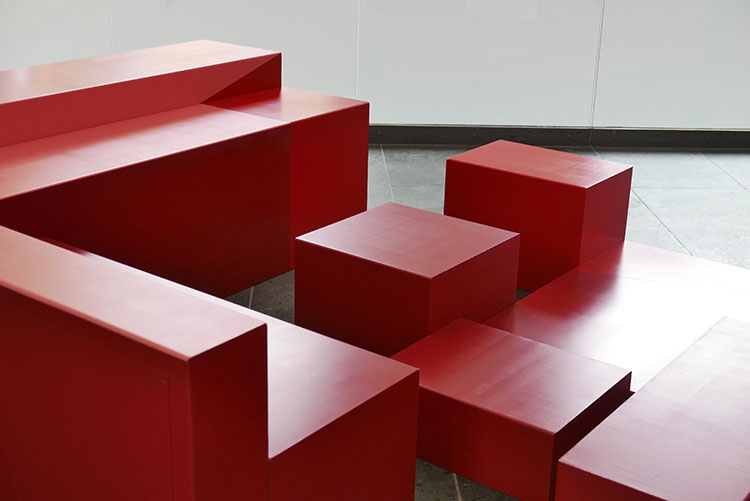 The participants are invited to occupy space, and each one can find in it a place. The diversity of the modules composing the Cube finds an echo in the singularity of each individual who can unite with the others and reveal a common contestation element. The red color is a continuation of a game with symbolic codes. Without wanting to be a political piece of art, the Cube plays with contestation symbols which are the image of the cobblestone and the color of struggles. 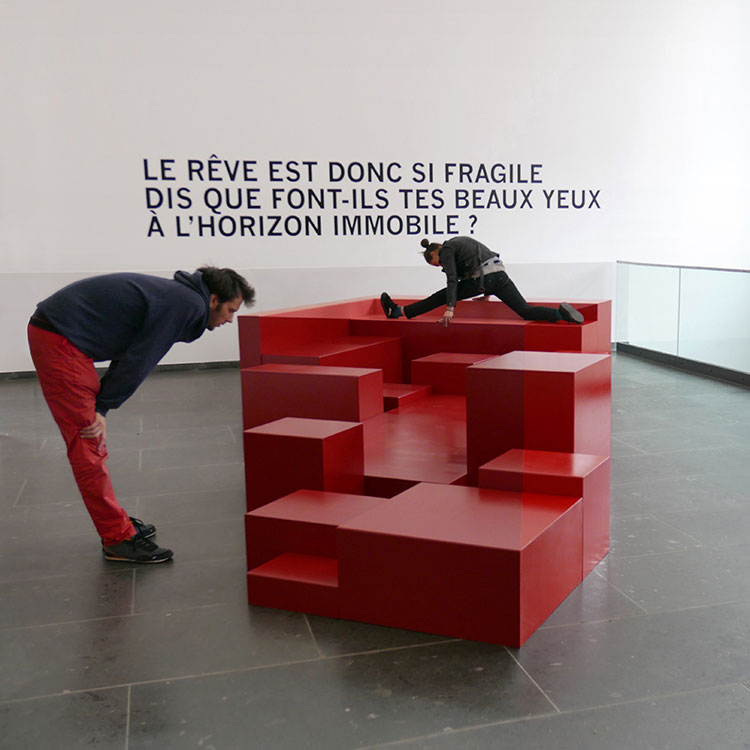 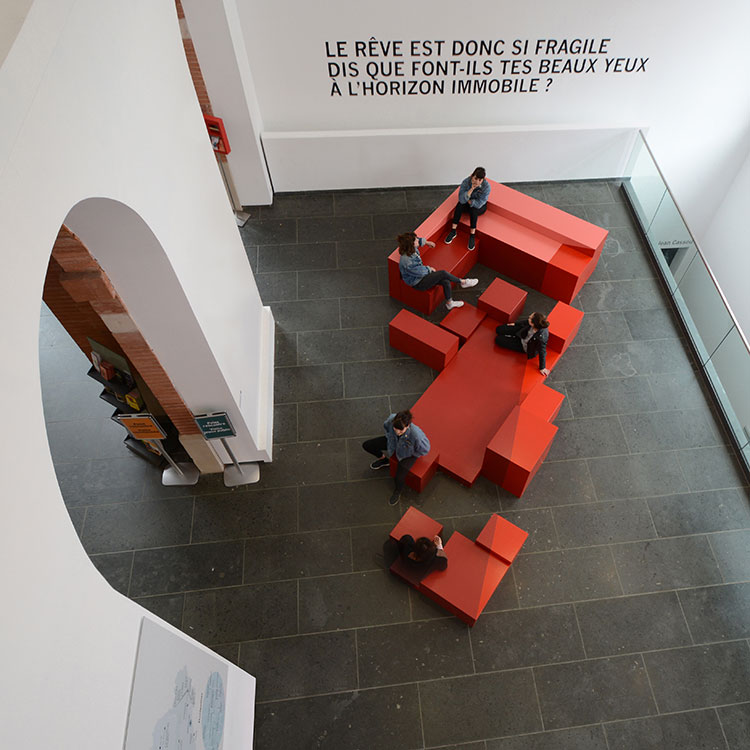