The National Museum of Qatar (NMoQ) has opened to the public, introducing an unparalleled immersive experience housed within a new architectural masterpiece by Jean Nouvel. The Museum’s winding, 1.5-kilometer gallery path is a journey through a series of unique, encompassing environments, each of which tells its part of the story of Qatar through a special combination of architectural space, music, poetry, oral histories, evocative aromas, archaeological and heritage objects, commissioned artworks, monumentally-scaled art films, and more. 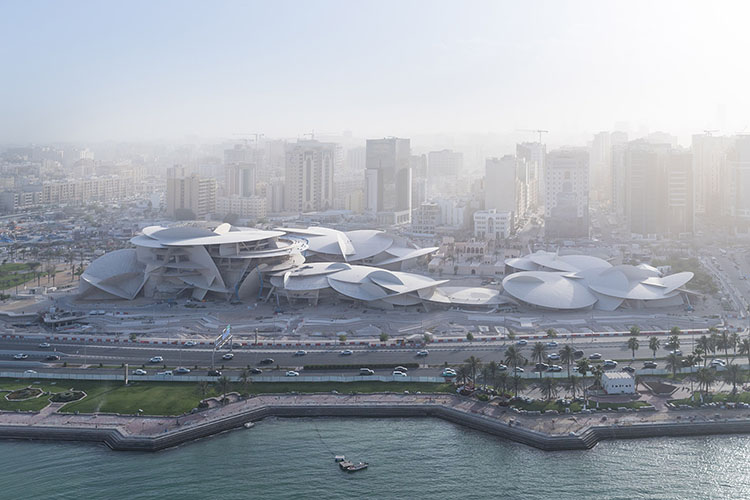 Together, the eleven permanent galleries take visitors from the formation of the Qatar peninsula millions of years ago to the nation’s exciting and diverse present. Giving voice to the nation’s rich heritage and culture and expressing the aspirations of its people, NMoQ will serve as a hub for discovery, creativity, and community engagement, providing diverse educational opportunities for Qatar and advancing the nation’s cultural vision on the global stage.

The spectacular 52,000-square-meter (560,000-square-foot) NMoQ embraces as its centerpiece the restored historic Palace of Sheikh Abdullah bin Jassim Al Thani (1880-1957), son of the founder of modern Qatar. A building that in former times was both the home of the Royal Family and the seat of government, and was subsequently the site of the original National Museum, the historic Palace is now the culminating exhibit in the sweeping succession of gallery experiences. 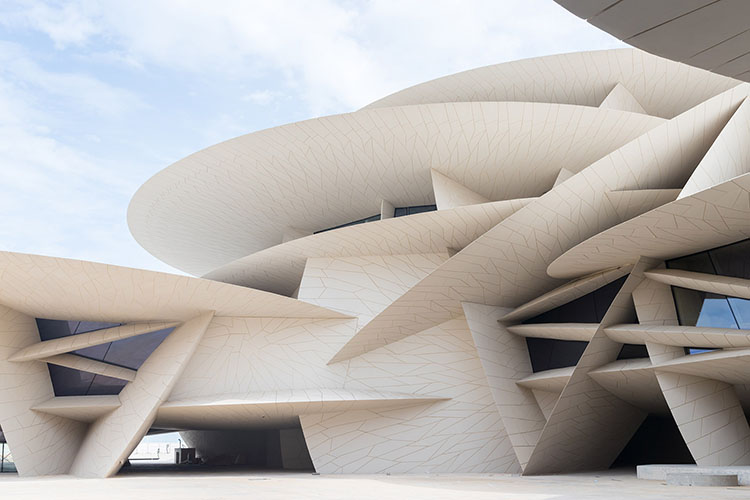 In designing the building, Jean Nouvel drew inspiration from the desert rose, a flower-like formation that occurs naturally in the Gulf region when minerals crystallize in the crumbly soil just below the surface of a shallow salt basin. Described by Nouvel as “the first architectural structure that nature itself creates,” the desert rose became the model for the Museum’s complex structure of large interlocking disks of different diameters and curvatures—some vertical and constituting supports, others horizontal and resting on other disks—which surround the historic Palace like a necklace. 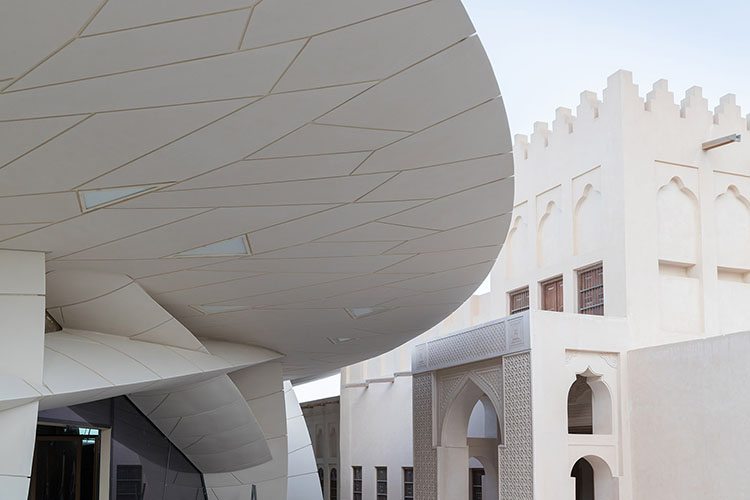 A central court, the Baraha, sits within the ring of galleries and serves as a gathering space for outdoor cultural events. On the outside, the Museum’s sand-colored concrete harmonizes with the desert environment, so that the building appears to grow out of the ground and be one with it. Inside, the structure of interlocking disks continues, creating an extraordinary variety of irregularly shaped volumes.

Jean Nouvel said, “To imagine a desert rose as a basis for design was a very advanced idea, even a utopian one. To construct a building with great curved disks, intersections, and cantilevered angles—the kind of shapes made by a desert rose—we had to meet enormous technical challenges. This building is at the cutting edge of technology, like Qatar itself. As a result, it is a total object: an experience that is at once architectural, spatial, and sensory, with spaces inside that exist nowhere else.”

NMoQ is organized in three chapters—“Beginnings,” “Life in Qatar,” and “The Modern History of Qatar”— presented in eleven galleries, which take visitors from the geological period long before the peninsula was inhabited through to the present day. Passing through the galleries, visitors are caught up in the experience of the formation of the Qatar peninsula and its natural habitat, the heritage of life in Al Barr (the desert) and on the coast, the political development of modern Qatar, the discovery of oil, and Qatar’s multifaceted relationships today with the larger world. 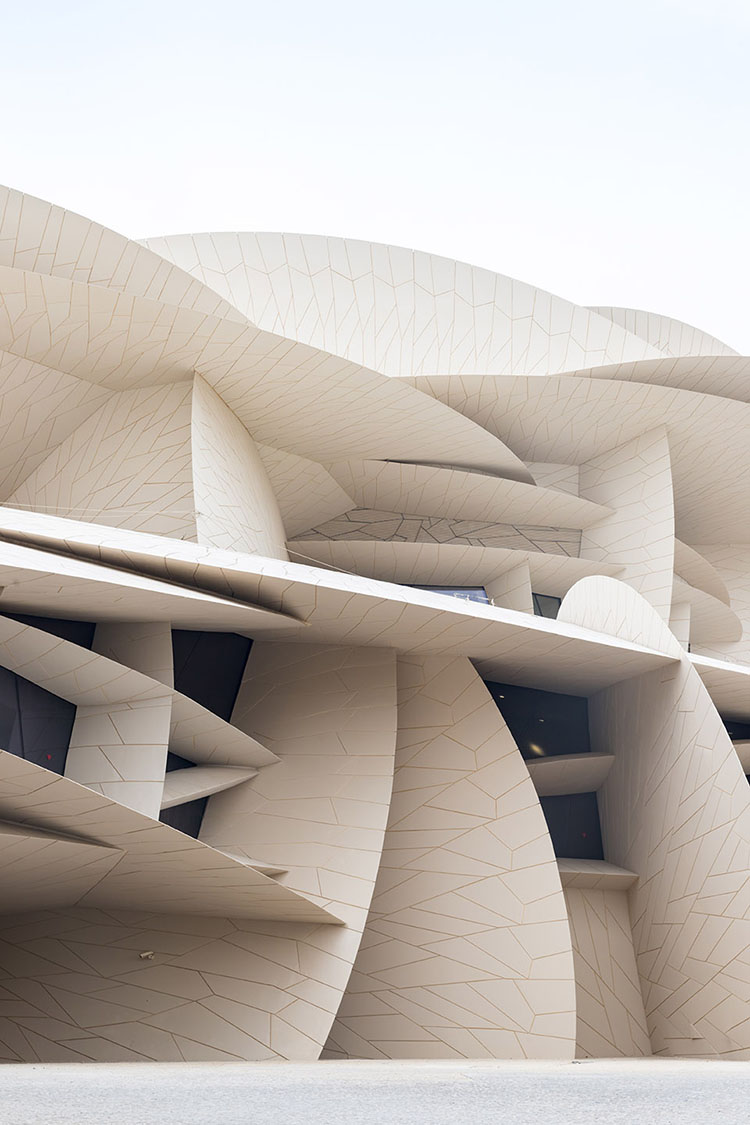 The permanent gallery route culminates in the very heart of Qatari national identity, the restored Palace of Sheikh Abdullah bin Jassim Al Thani. Built in 1906, this palace is significant as a national symbol and is one of the best-loved Qatar landmarks. Following a painstaking restoration project over a period of more than three years, it now forms the final highlight of a visit to the National Museum of Qatar.

To inaugurate its temporary exhibition gallery, the new National Museum of Qatar will present an exploration of the ongoing urban and architectural development of the capital city, Making Doha 1950-2030, on view from 28 March through 30 August 2019. 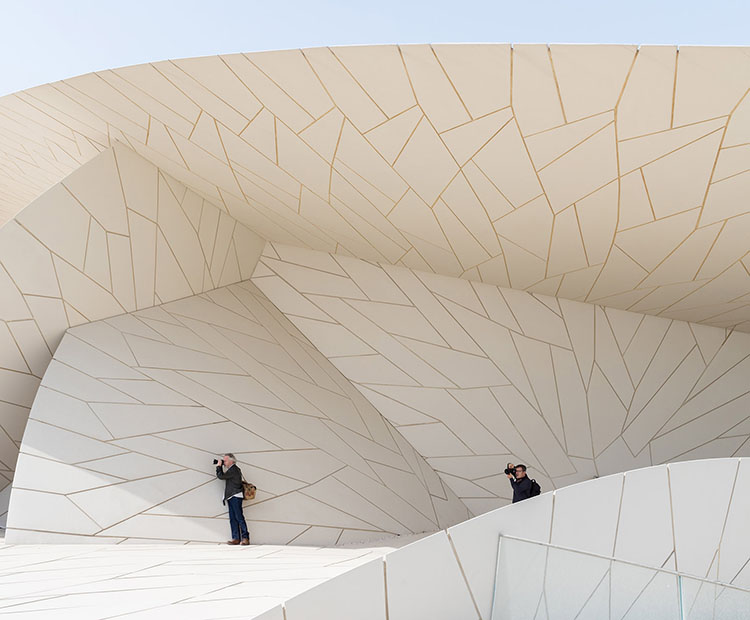 Curated by Rem Koolhaas and Samir Bantal of OMA/AMO and Fatma Al Sehlawi and the Qatar based research team from Atlas Bookstore, and designed by a team from OMA/AMO, Making Doha 1950-2030 brings together seventy years of photographs, models, plans, texts, films, oral histories, and archival materials to chart Doha’s transition from organic growth to more modern and deliberate planning practices.

The floorplan of the exhibition is designed as a timeline, with key moments punctuating the visitors’ passage along the narrative. A 115-meter-long curtain printed with historical collages lines the edge of the space. 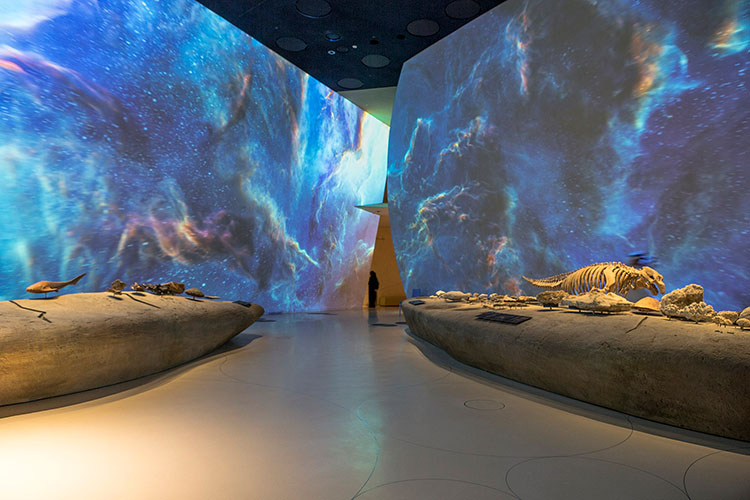 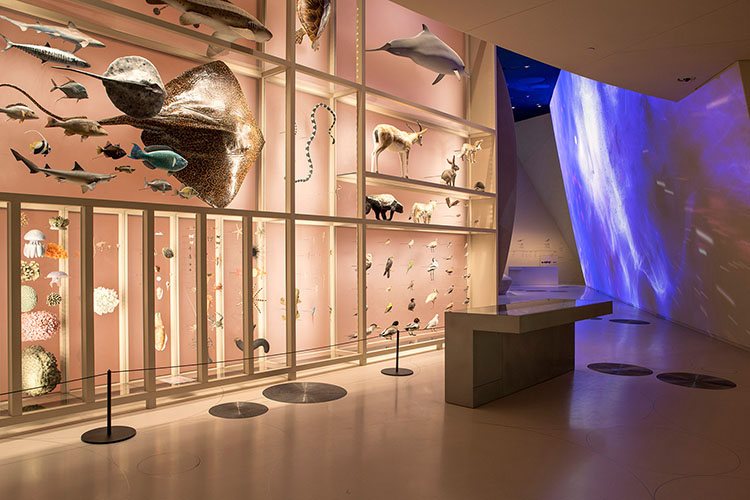 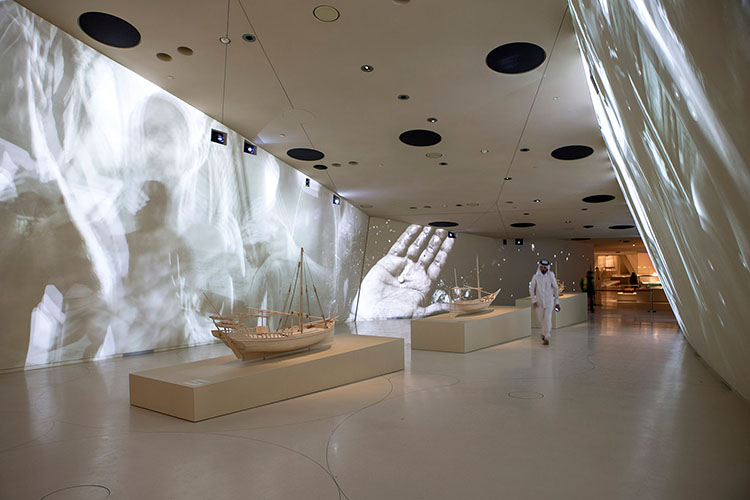 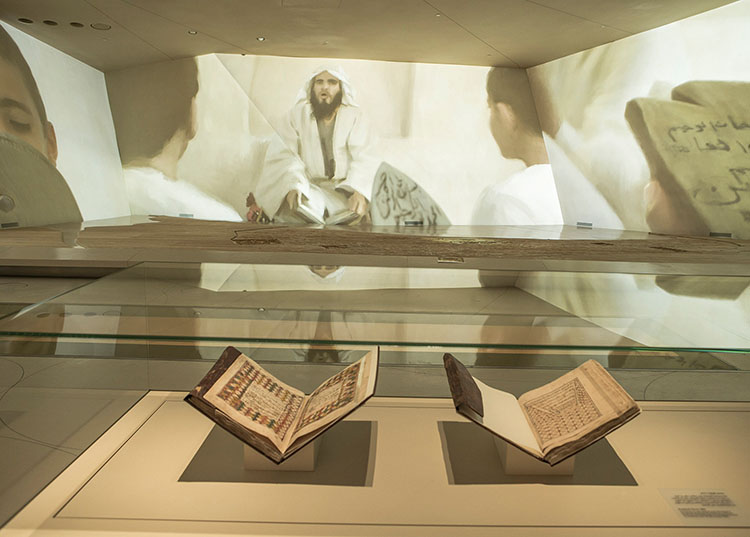 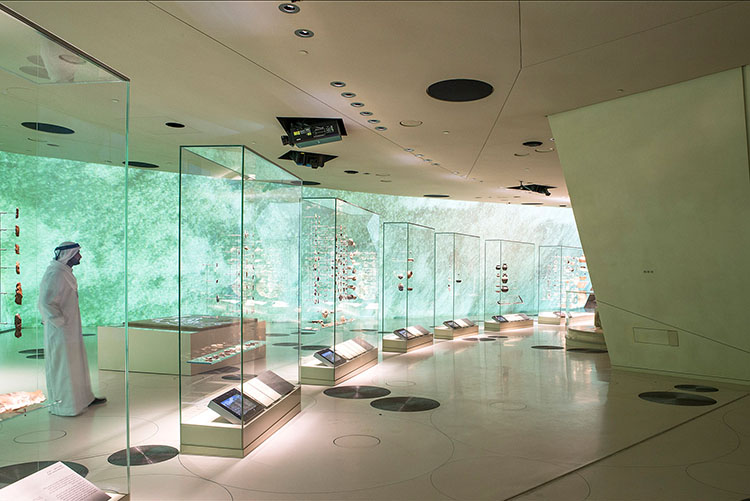 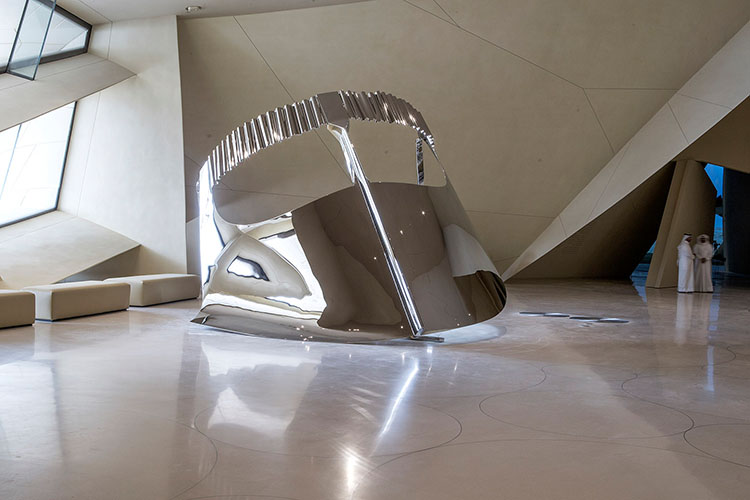 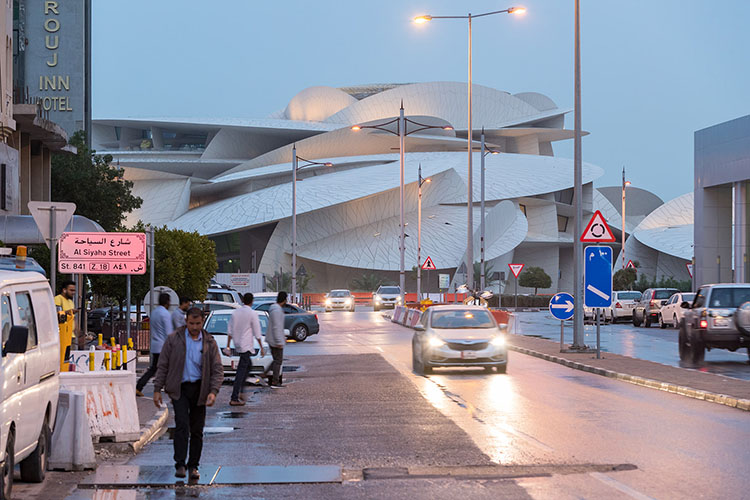