Montreal-based creative agency Float4 has designed and produced the digital light spectacle for the grand opening of the Seminole Hard Rock Hotel & Casino in the city of Hollywood, Florida. Float4 has also designed two more daily shows for the hotel’s LED facade. For this project, Float4 assembled a creative team to develop, produce and integrate generative and sound reactive content for the front-facing facade of the Guitar Hotel.

When devising content for the Hard Rock Hotel project, Float4 wanted each show had a purpose – a narrative and theme that evoked an emotional response in the audience. The shows will be a testament to how music has been instrumental in defining the legacy of Hard Rock hotels, restaurants and entertainment properties around the world. All the content is managed on a single 4 Karat media server from RealMotion’s Gold Series, and the shows will run from sundown to sunrise every night. 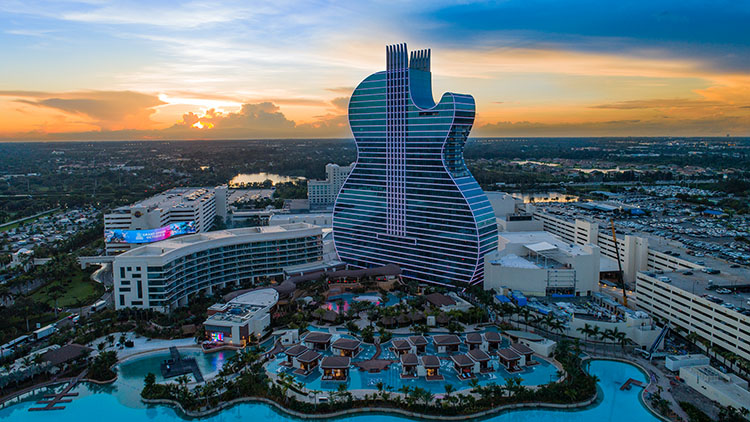 The front facade of the hotel is both a media system and a dynamic sculpture – the building is lined with 16,800 V-Sticks (video fixtures using high-performance LEDs), which serve as a screen and stage to daily musical showcases. During a show, each V-Stick will light up with different colors, speeds, patterns or directions, depending on the content sequence the Float4 team designed. Float4 worked with DCL and SACO Technologies, a pioneer company dedicated to advancing solid-state LED technology in applications with lighting and media, to program and choreograph the shows. 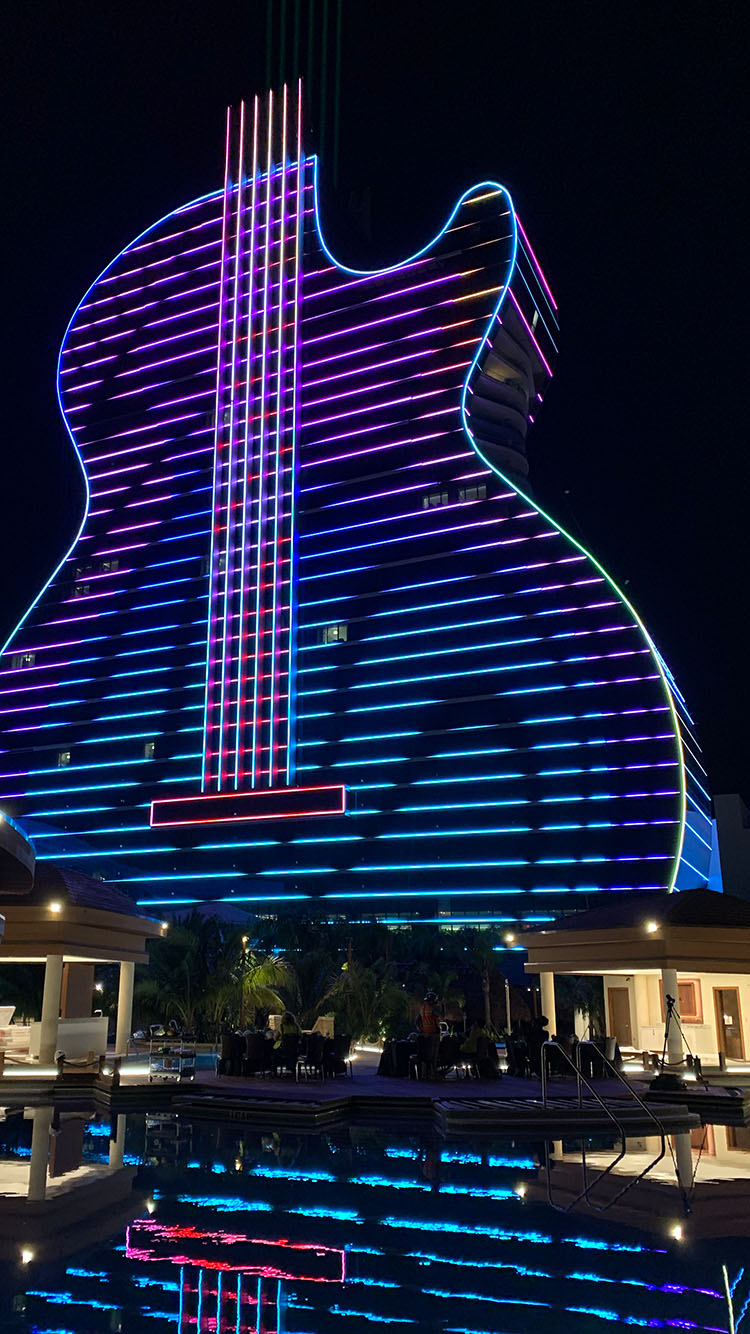 A 3D CAD model of the hotel was created to pixel map each individual V-Stick, including its position on the building, the direction it was facing, and its signal flow. The team needed to create a lookup table that the 4 Karat RealMotion server could use to sample content from the model and output to the building itself. Using a parsing script written by Float4’s software developer, those components, which amounted to about 2 million pieces of data, were converted into usable data strings, so that the team could choreograph content that corresponded to the building’s existing technical infrastructure. Converting the data one by one would have taken about 4 years to finish. 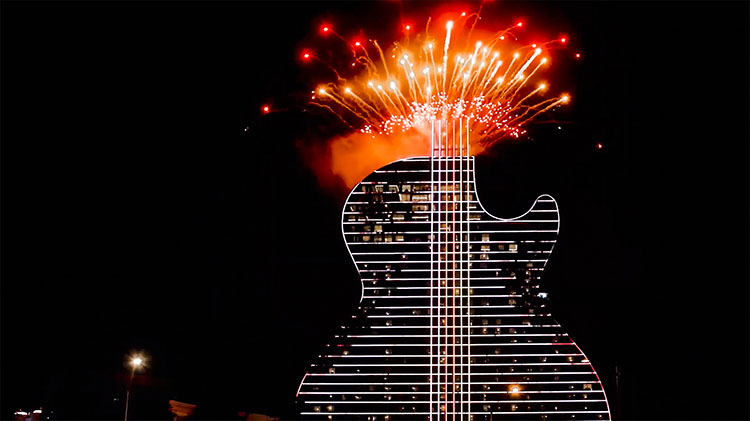 “Before a show, we have a moment where the installation is in a dormant state; the lights are ambient, fluid,” mentioned Antoine Saint-Maur, Multimedia Director at Float4. “At that moment, we want guests to be able to congregate in anticipation, collectively anticipating the start of the show. When in Las Vegas, people make their way over to the Bellagio Fountain Show and there’s this brief period where time stands still in eagerness as everyone gathers for this one monumental experience. That’s the feeling we want to create with the shows; we want to create a moment for Hard Rock guests and fans to come together and watch a daily celebration,” he added. 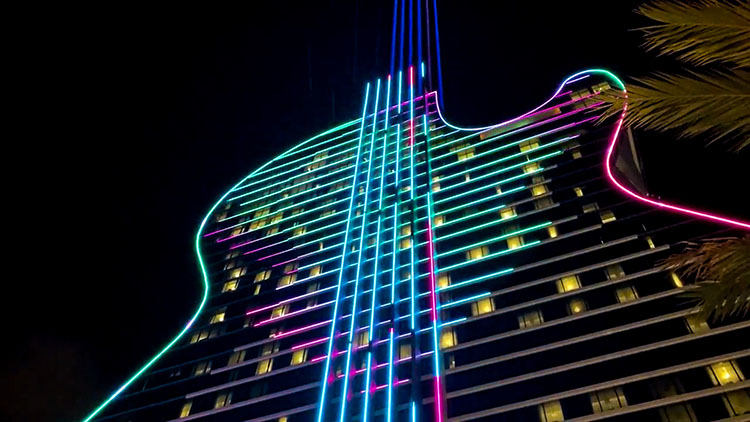 “At DCL, our goal for the Hard Rock was to give life to a monumental establishment through digital presence and creative solutions. Having worked with Float4 before, we knew that the studio’s combined technological and creative capabilities would be instrumental for the project. Along with our other service providers, Float4 contributed to our project goal by developing and programming three unique shows that will make this hotel the real attraction in South Florida for years to come,” said Mr. Jeff Gantz, Director of Creative Technologies at DCL Communications. 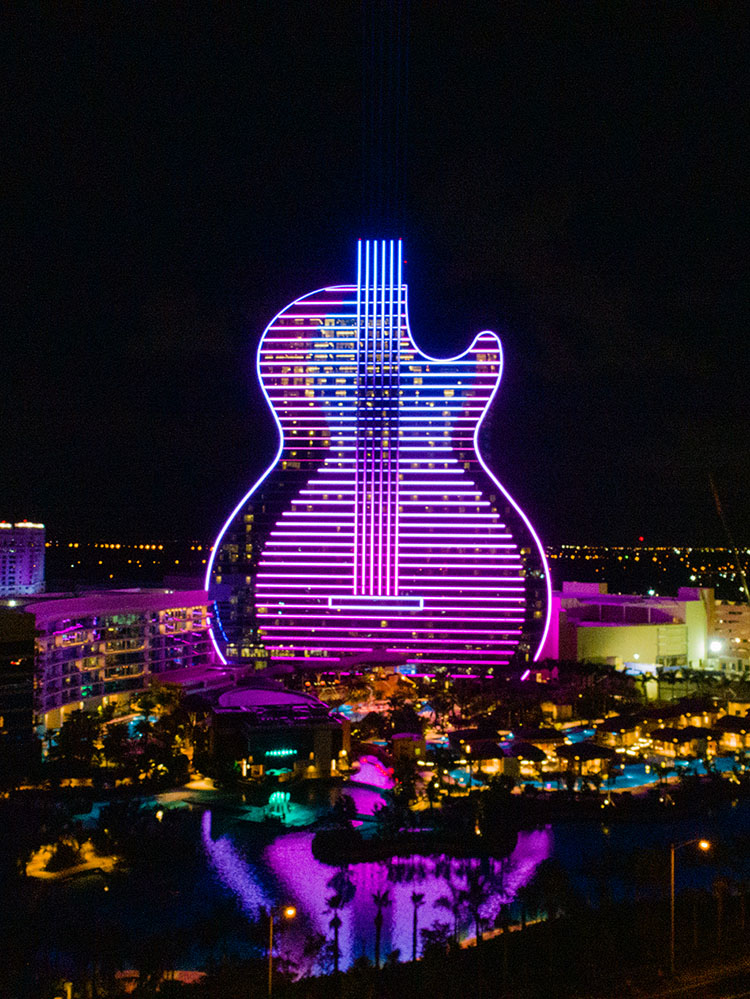 A first in the hotel and leisure industry around the world, the 400-ft tall guitar-shaped hotel is part of a property expansion estimated at $1.5 billion.