Commissioned to design the latest edition to Otto’s Burger in the historic heart of Cologne, Germany, Studio Modijefsky has taken the history of the building as an inspiration for the new interior. Formerly a bakery, the shop was characterized by two distinctive features that influenced the new design: the clear functional division of the space, and the traces of time visible within the tiled interior. 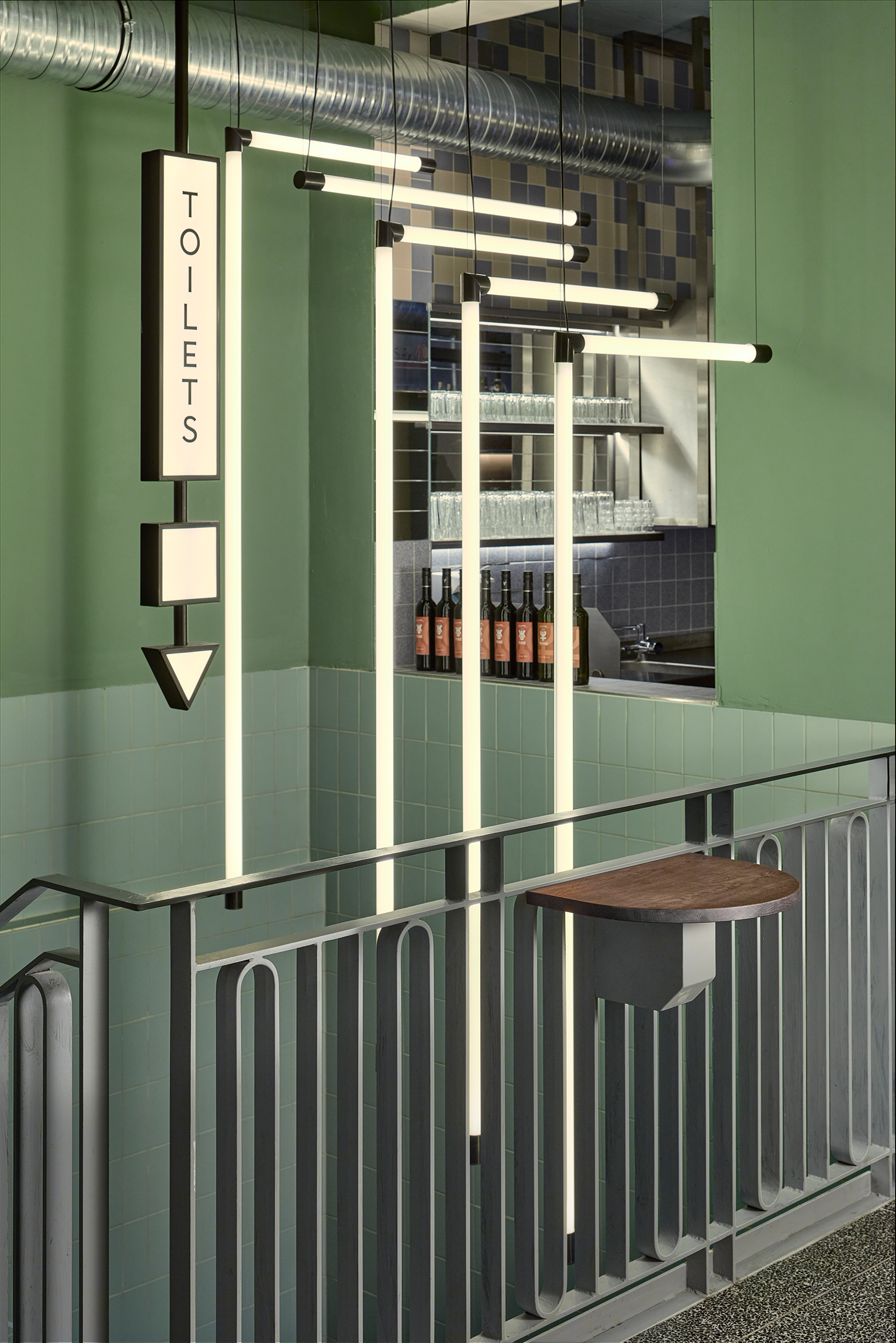 Covering an L-shaped plot, this new burger restaurant is wrapped around a corner building. On one side, the area that was an old bakery shop became the main entrance, positioned on Severinstrasse, an old, busy street that connects the city from north to south; on the other, the area once used as a storage for the bakery, opens on a quiet side street. In the back of the corner building, where the two spaces meet, there is now a kitchen that connects both sides of the restaurant. 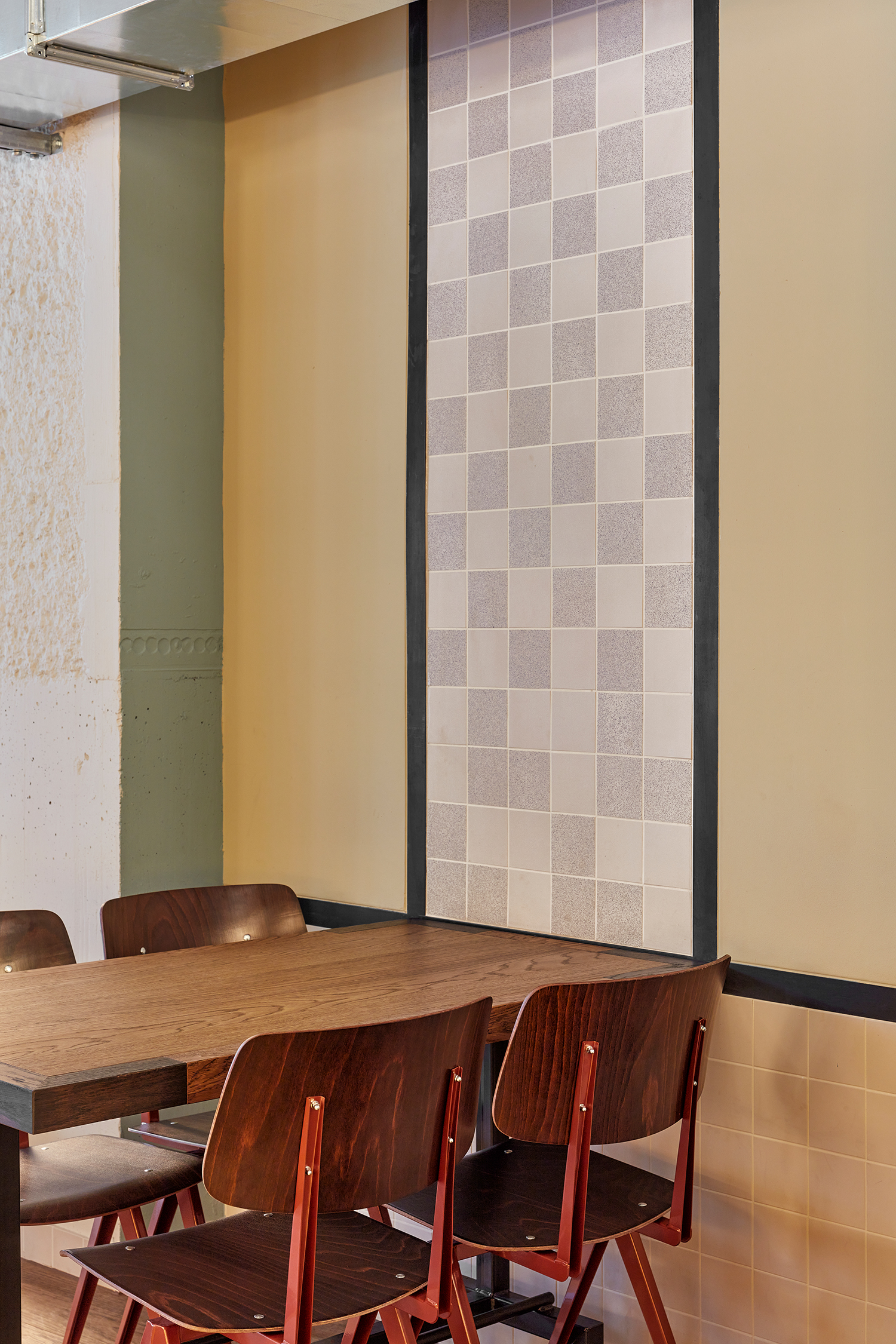 New materials are introduced into the space, giving quality and warmth, while the inspiration from the former bakery and Otto’s identity forms furniture pieces and special elements such as light fixtures and signage. Before the renovation, the tile pattern that used to fill the interior visibly showed the passing of time. Old and new tiles, with different sizes and colors laid side by side: a white and blue checkerboard standing next to a white lane of bigger tiles; broken L-shaped blue ones merging into black ones; terrazzo floor scattered within the building. The variety of colors, shapes and patterns inspired the new material palette. 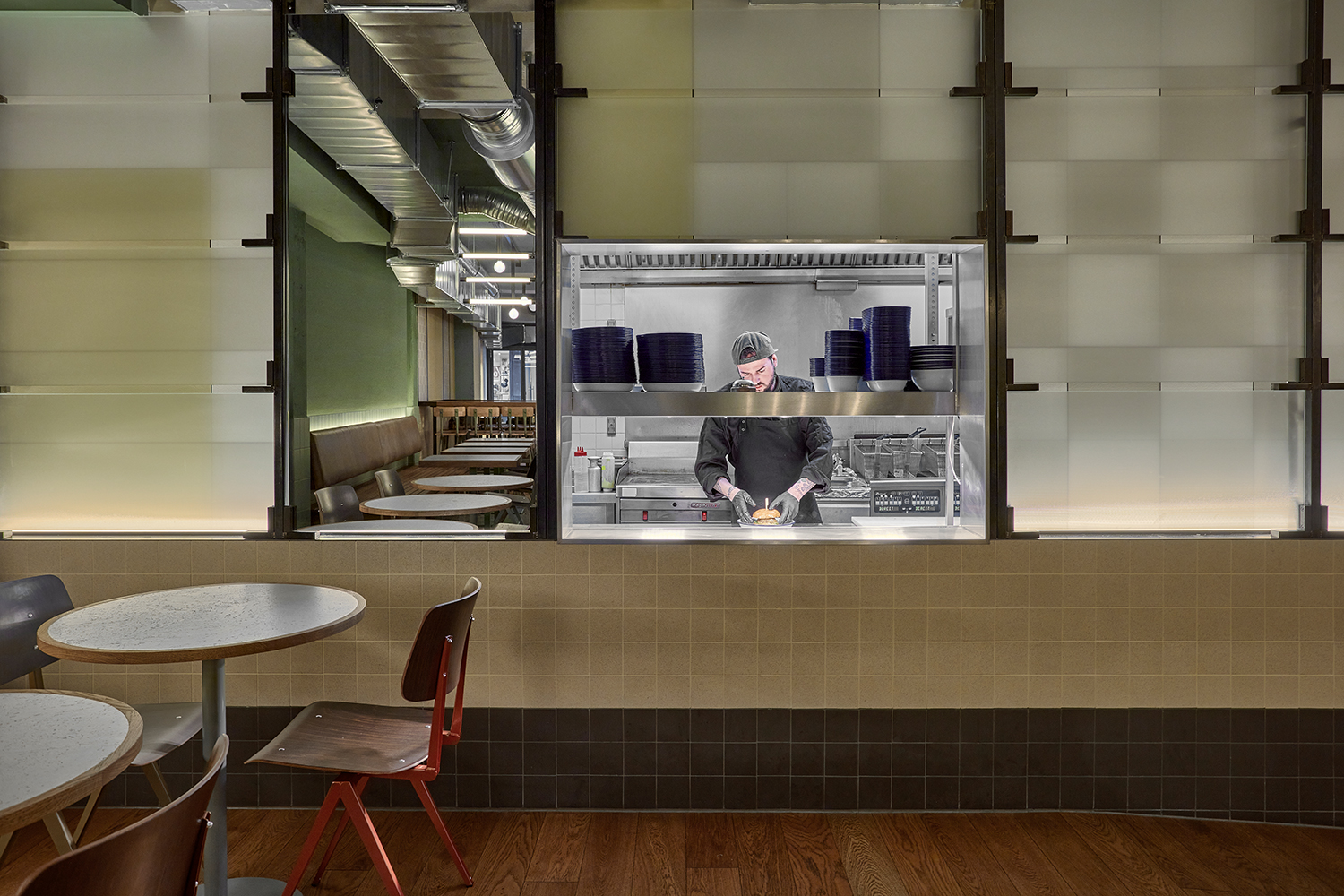 The link with the past is already visible within the façade: blue tiles inspired by the old interior embrace the entrance and visually connect with Otto’s logo. The lettering, built of simple shapes and profiles, connects the outside with the inside, where the space is unified by the same design language. 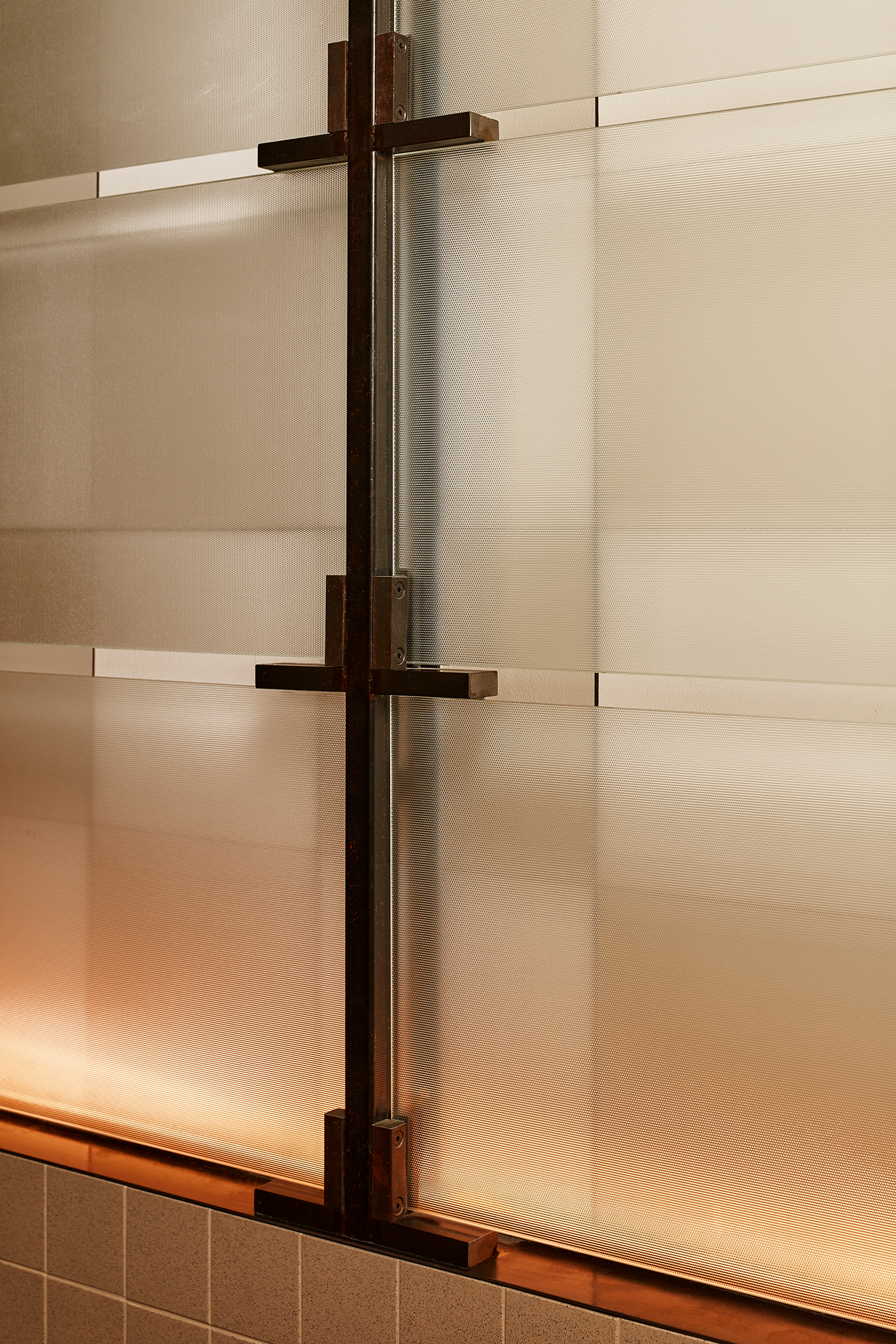 When walking into the building from the main street, a layered and inviting environment unfolds. Wood runs on the floor and climbs up on the bar and walls, giving a sense of warmth. Above the wood, a set of tiles, laid in the original pattern used from the bakery, pays homage to the history of the space. Speckled tiles and horizontal mirror slabs on the wall extend towards the center of the restaurant, inviting the visitor to walk further. 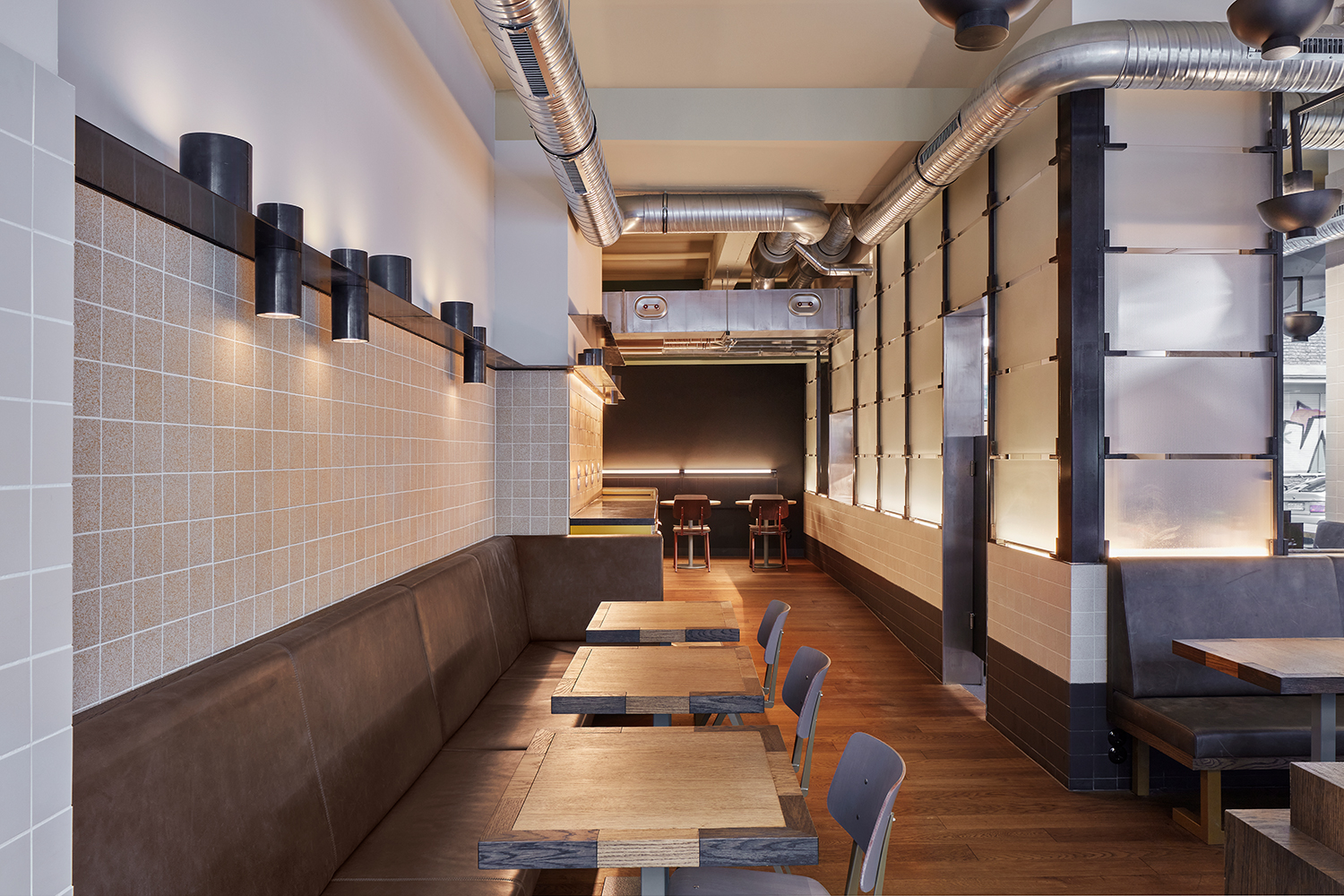 Halfway down the bar a sudden change in the floor is visible: exactly where the owners of the old bakery had re-tiled the floor there are now yellow tiles. These, just like the wood, continue on the bar and visually extend on the yellow concrete counter, giving the space a strong accent point. Hanging from the ceiling, and inspired by the letter T in Otto’s, is a light element which also functions as a menu display and glass rack. Its steel and glass components, inspired by the vitrine of the bakery, create the perfect background to sit and enjoy a drink. 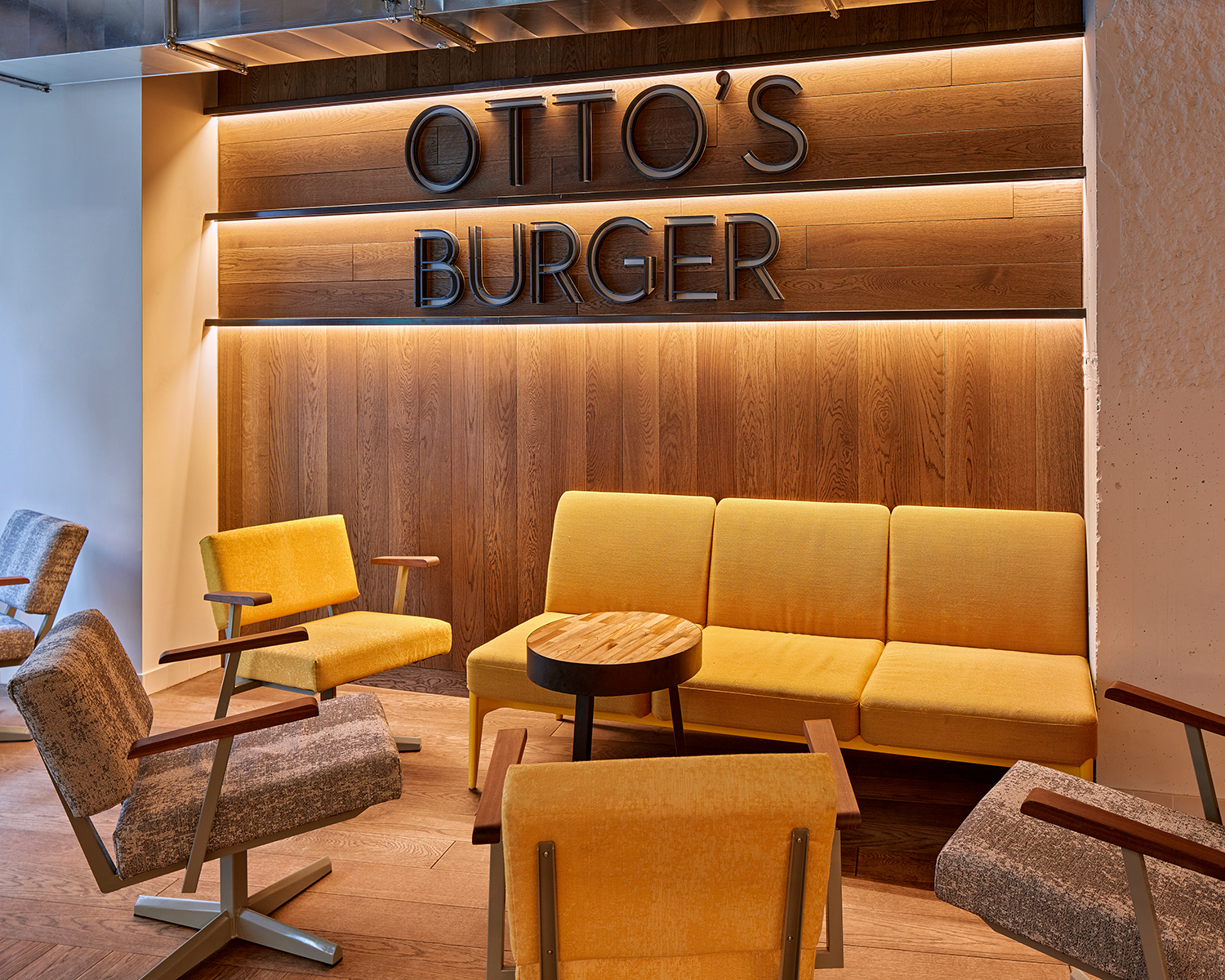 The informality of Otto’s logo is spread around the building: it is visible, not only through the transformation of its letters, but also through the juxtaposition of square and round profiles. This game is clearly recognizable in the bar area, where, square profile lights create the shape of a T. These hang from the ceiling beams and are suspended above high tables opposite of the bar, creating a visually separate dining area along with the wall tiled with different patterns. 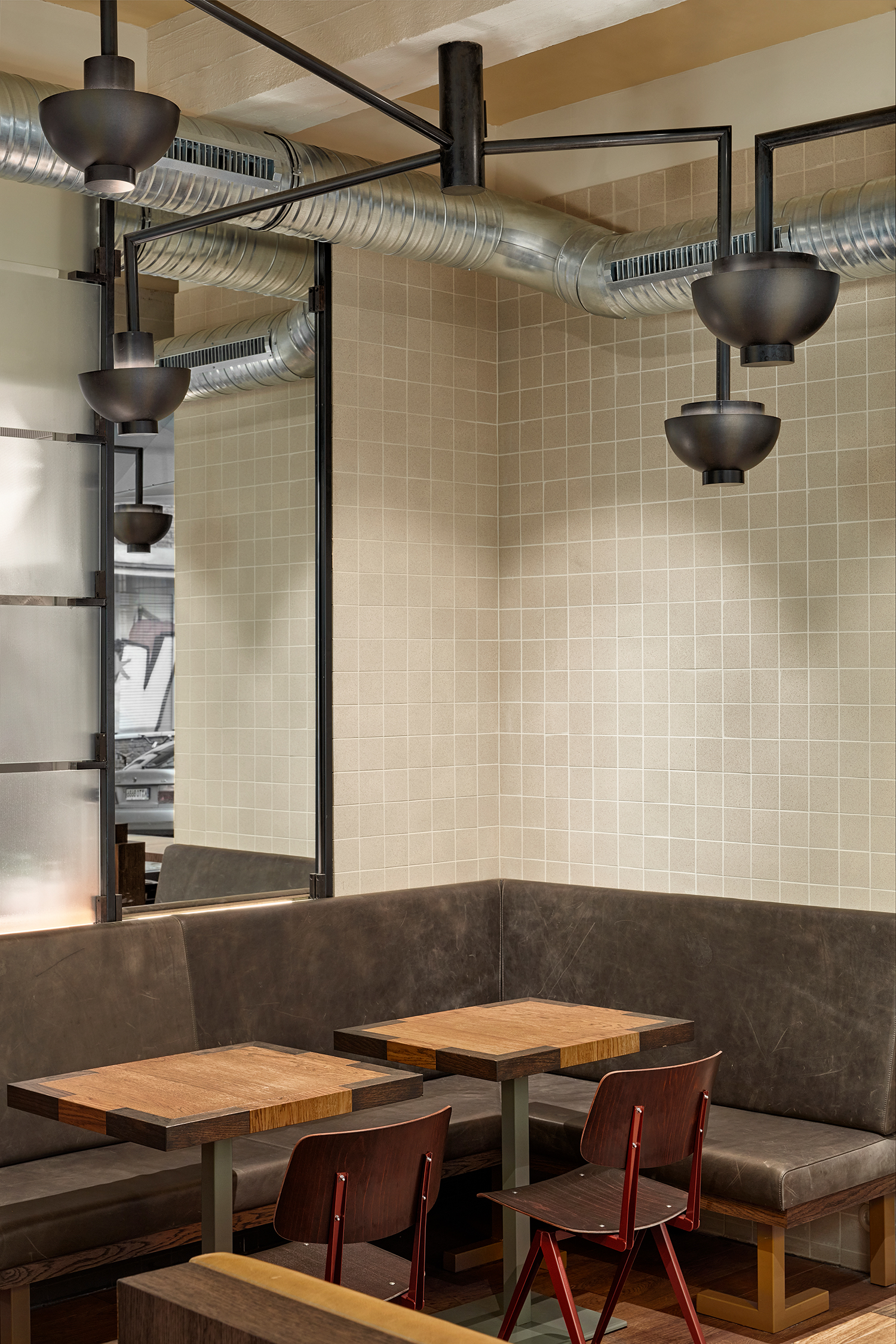 A bit further, the bar opens onto what used to be an open-air space. The memory of the outdoor character lives in the use of wooden furniture, the green color of the walls, the tiled floor and the accurate placement of plants. These elements, carefully balanced with a sapient use of light, create the illusion of a patio. 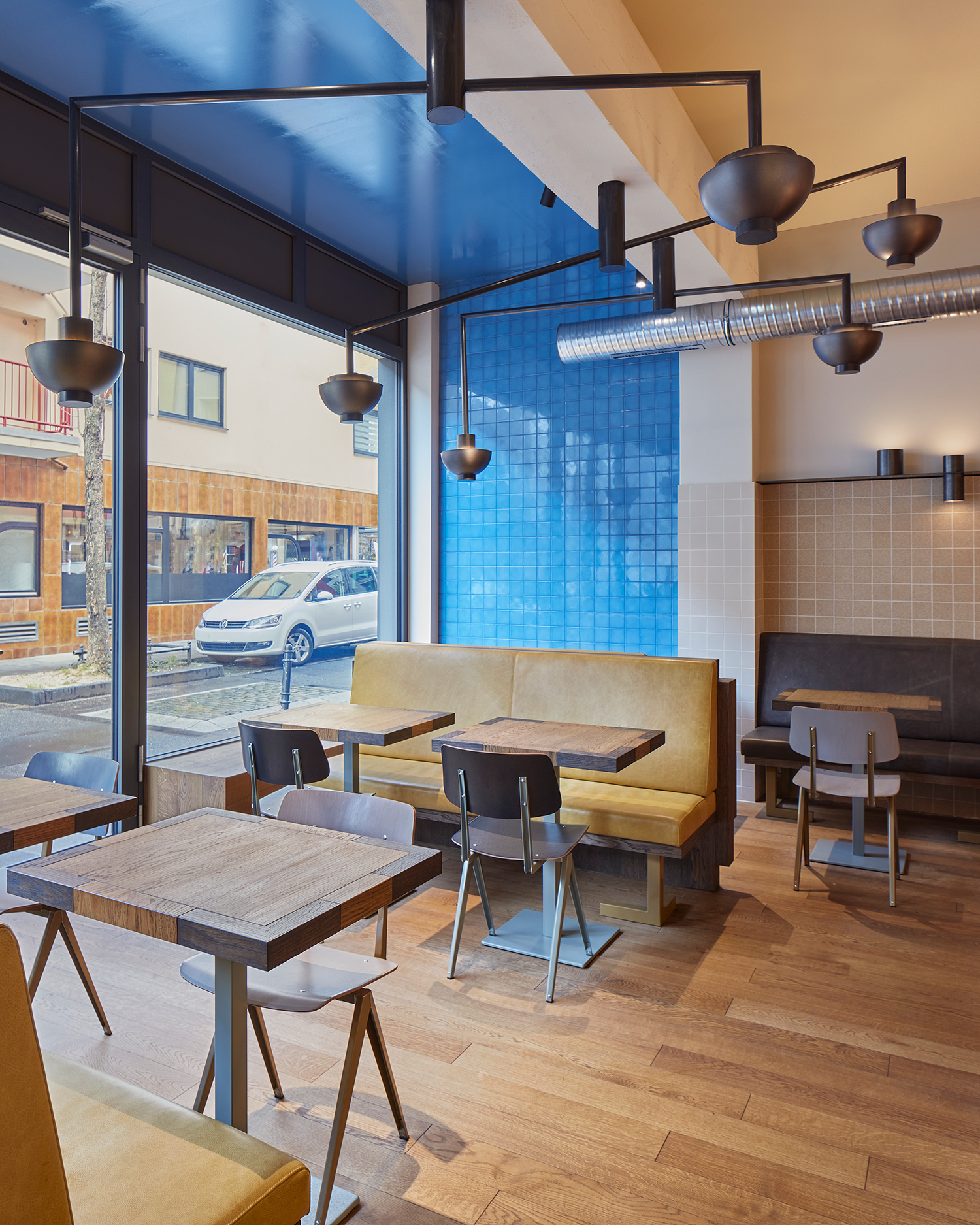 Above the head a stair-shaped tube lamp hanging from the ceiling indicates where the old staircase was located, while, under the feet, the new terrazzo floor unfolds leading the way towards the basement, where the old baking oven used to be. The railing, inspired by the language of the logo, dissolves within the darker-growing colors of the basement, seemingly taking the visitor inside the dark, flaming mouth of the bakery’s oven. 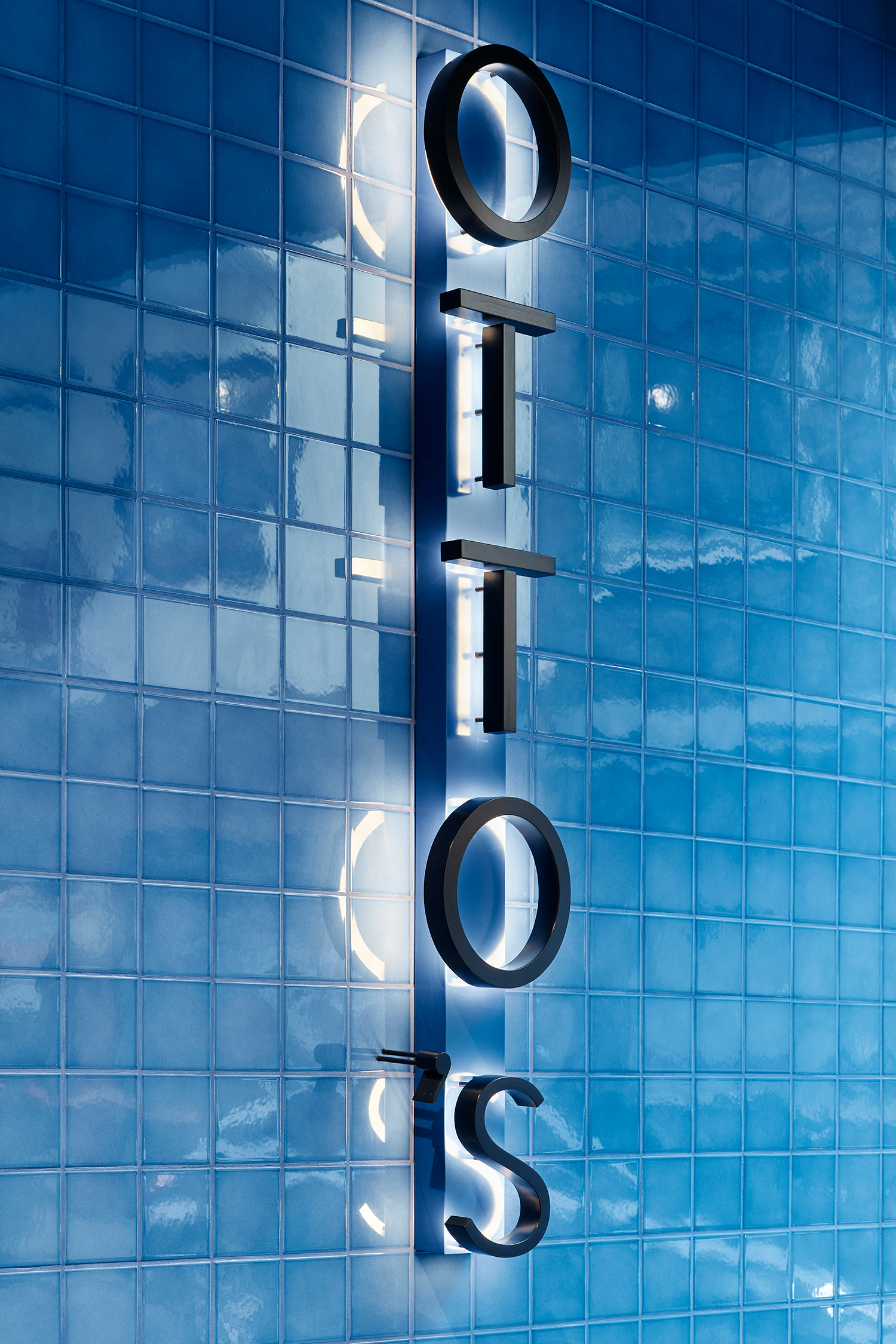 Continuing further from the patio, walking towards the kitchen, the atmosphere changes: the warmth of the wooden floor softens the space, the long sitting areas encircling the kitchen give a sense of home and the beige tones of the tiles remind us of the flour and water used to make the bread. The area that was once used as a storage space for the old bakery becomes the source of inspiration for the decorations: the lights hanging from the ceiling are a reminder of the traditional bullion scales; the shelves running along the wall hold what looks like scale weights; the frame around the kitchen glass resembles the bakery tray rack. When looking at the furniture it is possible to see the flexibility of Otto’s language, which is transformed to create half-T shaped legs for the benches of the restaurant. 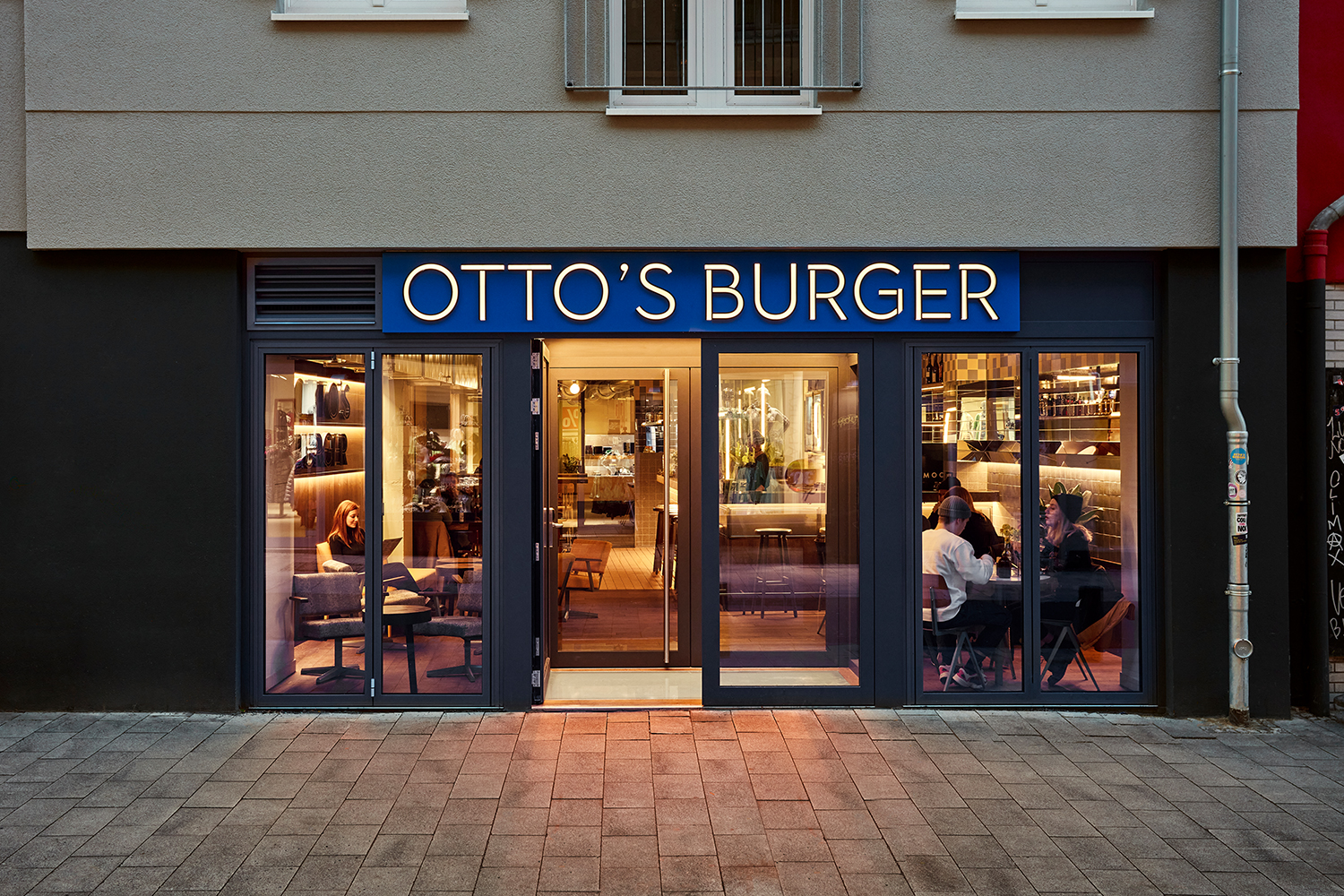 Otto’s style effortlessly merges with the rich history of the space that flows throughout the whole restaurant. The four distinct areas of the building come together under a straightforward graphic language which fits perfectly with the identity of a burger restaurant. By turning this old bakery into the second Otto’s Burger outside of Hamburg, Studio Modijefsky’s new design invites you to take a break and enjoy a nice drink, or taste a delicious burger, surrounded by a fresh and welcoming vibe.