In South Tyrol, Saltaus, local practice noa* – network of architecture has recently completed the overhaul of the Apfelhotel Torgglerhof, evoking the vintage charm of this historical hotel while creating an oasis for the senses and shared moments.

The apple, a fruit that originated in Kazakhstan and was brought to South Tyrol by the Romans, is central to the region’s cultural landscape. The Torgglerhof lies at the mouth of the Passeier Valley, its roots run deep in classic apple cultivation culture. Over time, it became a spot for people wanting to linger, connect, and soak up the scenic views. It’s here that the Apfelhotel (eng. Applehotel) was built, and it has since become both an outing destination and an insider tip for guests looking for a holiday treat and special getaway – with scrumptious architecture. 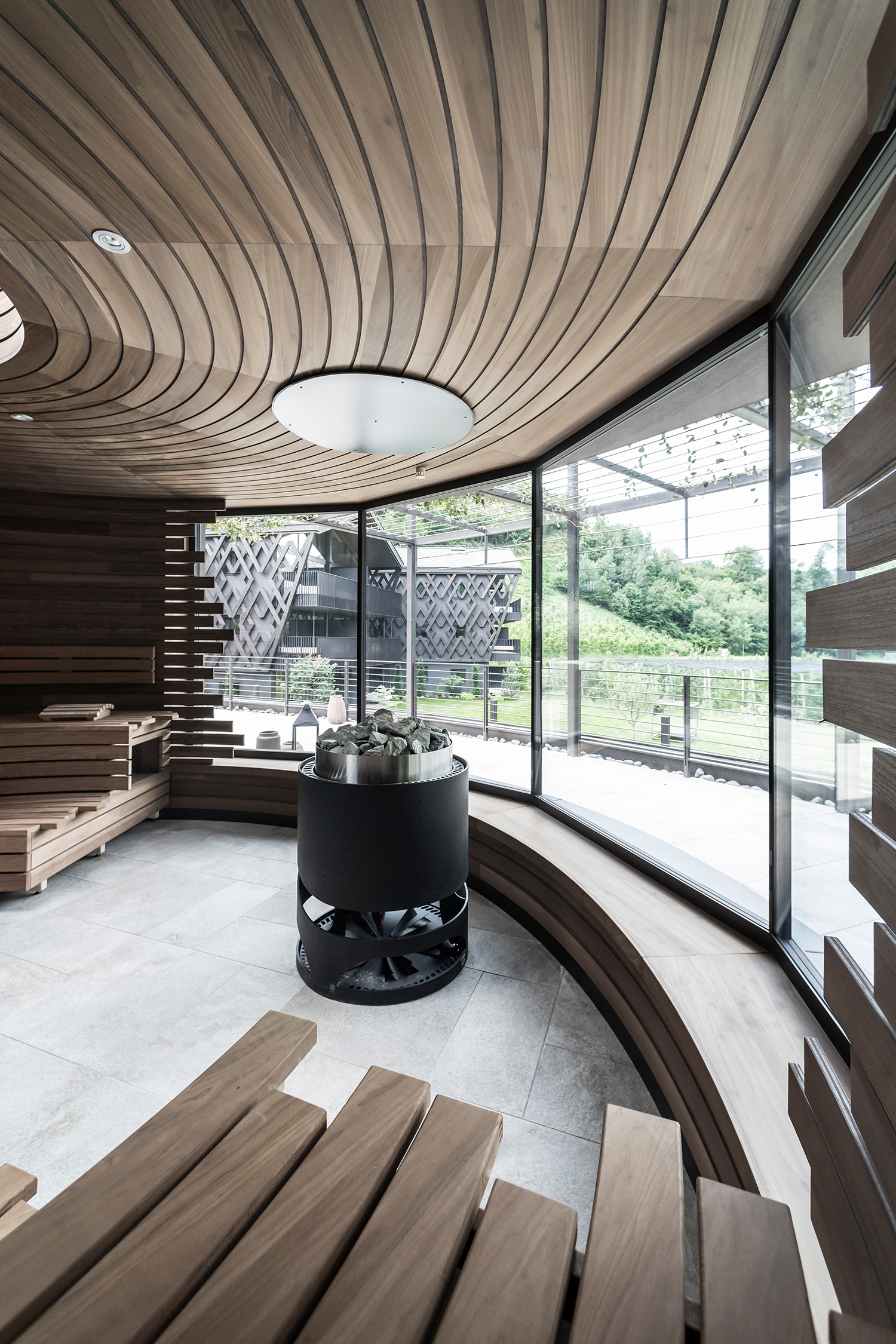 In 2014, noa* won a design competition for expanding the hotel’s existing structure, which was implemented in several stages. In 2016, the main building with the restaurant as well as the old barn were dismantled and stripped back for conversion.

Behind the original façade of the barn, beneath the guest rooms, you’ll find Apfelhotel’s production of various delicacies from their home-grown apples as well as other local specialties. The Apfelsauna (eng. Applesauna) was completed as the first feature of a spacious wellness and relaxation landscape, which has now been expanded. 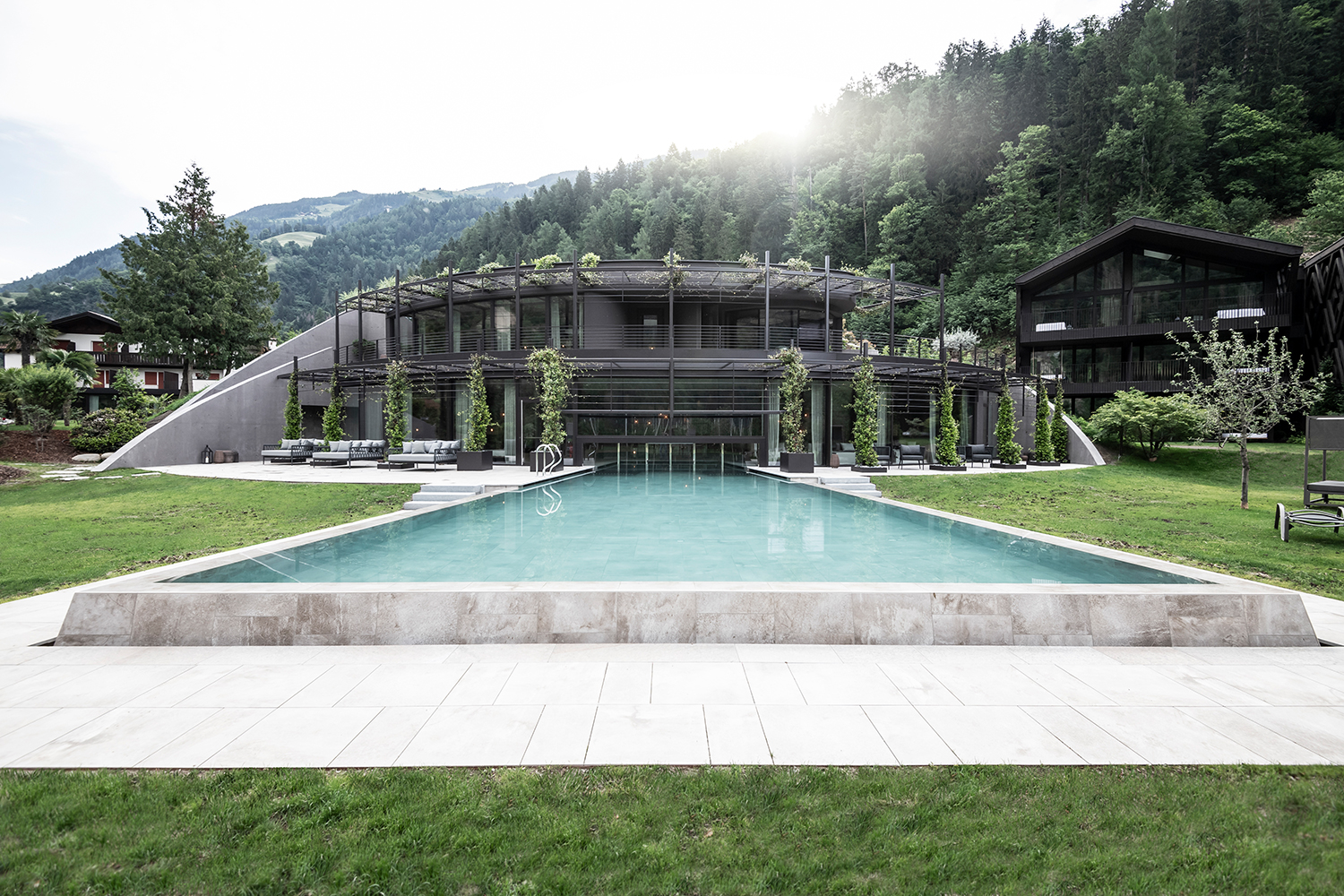 In 2020, 18 new suites were built for guests and carefully designed to fit into the farmyard’s landscape structure while complementing the rural surroundings. A special emphasis was placed on preserving the characteristic of the farmhouse ensemble and maintaining its scale.

As the central masterpiece of this rural development, noa* designed a wellness area with architecture and greenery that resemble a modern lush garden. A kind of “green heart” that, like the apple-shaped sauna, integrates smoothly and fully into the landscape. 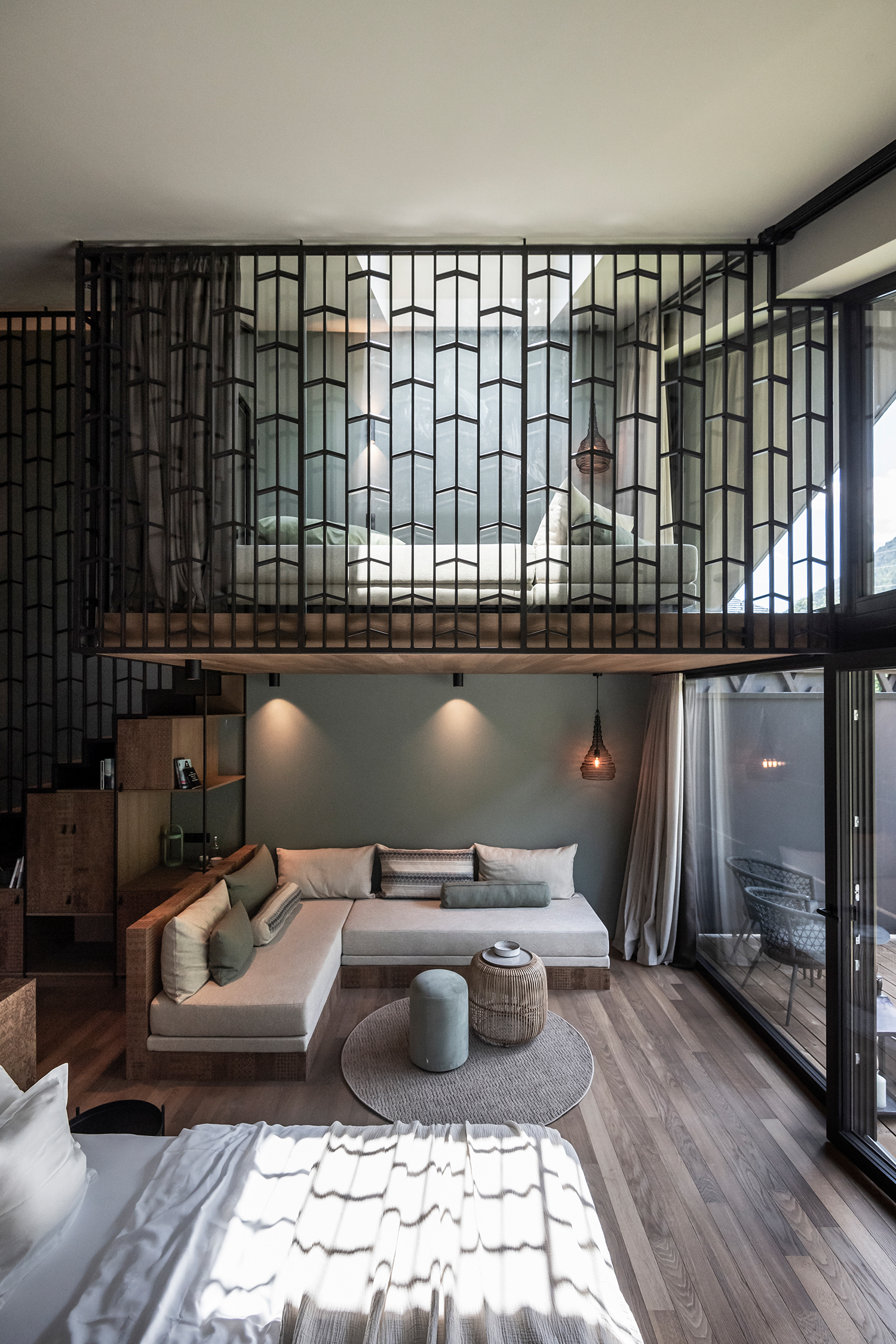 The newly opened wellness facility – the hotel’s new centerpiece – has no Northside facade, instead, it blends into a natural green slope so that the building can hardly be seen. The entrance to the new spa is a curved semi-exposed concrete shell that tucks into the landscape and is designed with a stunning portal made from old wood. Here, in the interface between the surface and subsurface, the word immersion takes on a meaning of its own. The Southside of the wellness area, on the other hand, opens up with a glass and steel facade that vanishes underneath a blanket of rooftop greenery. The steel canopy, on which fragrant jasmine flowers will climb, protrudes upwards into the open sky, reminiscent of the holding structures used in modern apple cultivation. 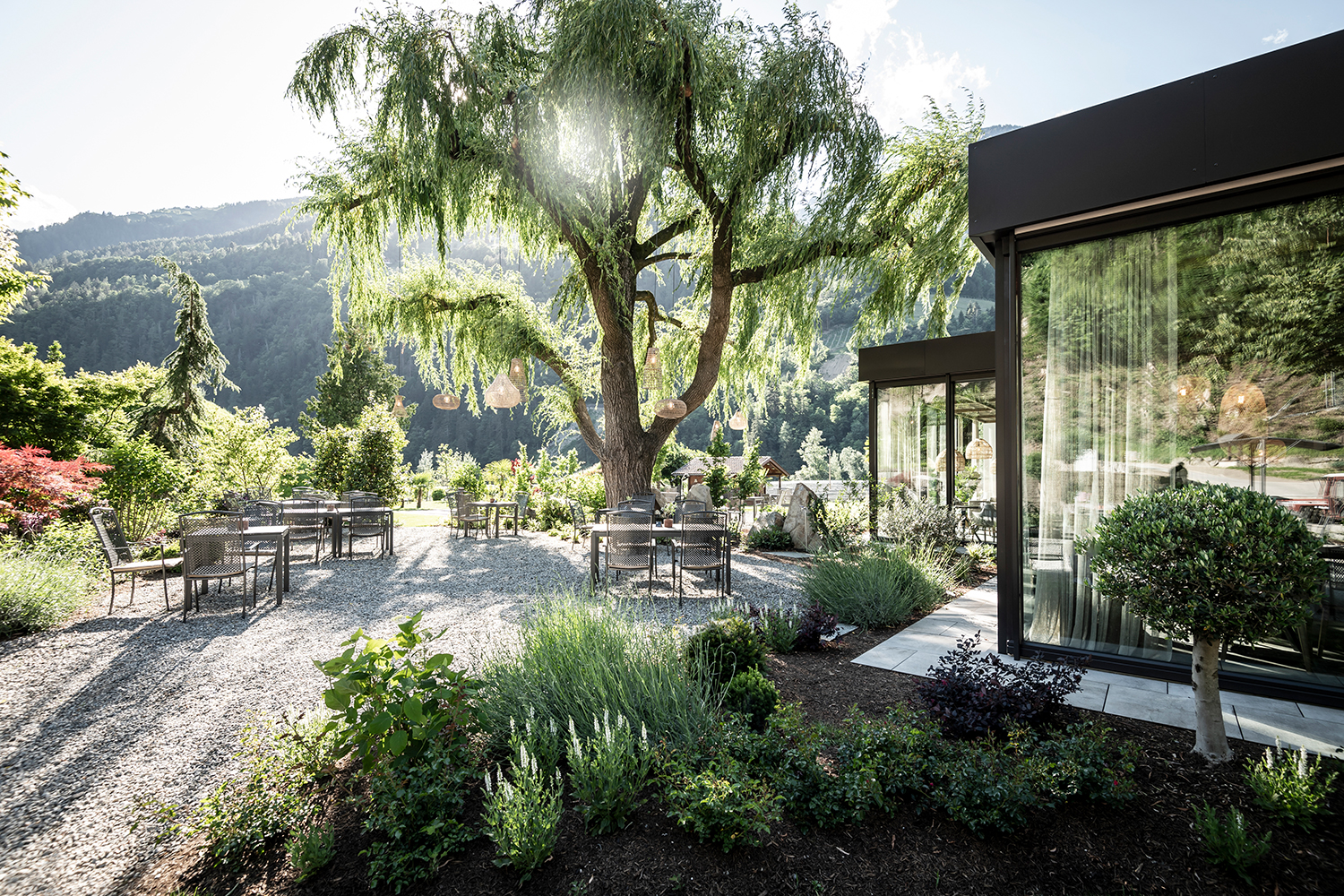 Much of the Brunnenhaus, (eng. Water Well House), as the new wellness area is also called, is largely hidden from sight: the entire structure is covered with a layer of earth and plants, designed to blend naturally into the bottom of the hill and thus merge into the landscape. The spa boasts a central drinking fountain made from natural-stone and an open fireplace in a spacious lounge area, which leads onto the showers, changing rooms, and beauty and massage rooms. The indoor-outdoor pool stretches out to the outdoors through the overgrown green façade and is partially framed with Lucerne metamorphic gneiss rock. The framing dissolves where the water edge meets the surrounding open space to visually connect with the landscape in an infinity edge. 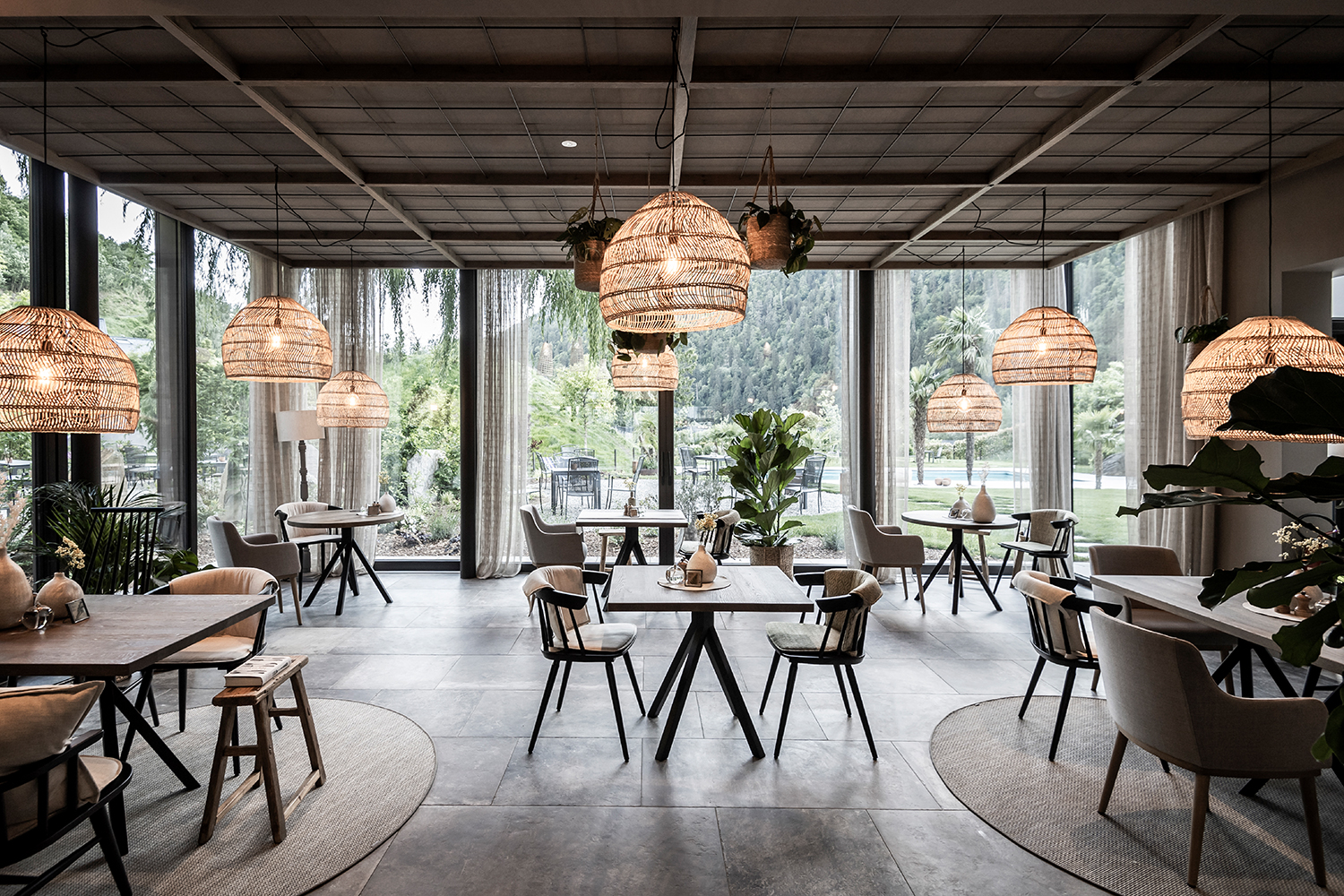 The upper floor is an area for adults only – it features a sauna lounge, relaxation room, and a Finnish sauna and steam bath and an adjacent terrace where guests can refresh with an outdoor shower. The Finnish sauna is a dream for the senses, with its horizontally curved wooden slats and generous glazed windows, it offers a scenic view of the outdoors and apple fields. The steam bath has a cave-like character, with droplets collected in a clay pot due to the ceiling that inclines towards the room’s centre. The relaxation room offers a spectacular view of the valley through the greenery of its facade cladding. The Apfelsauna in the garden can be reached via a curved open staircase, which is flanked by the exposed concrete shell. 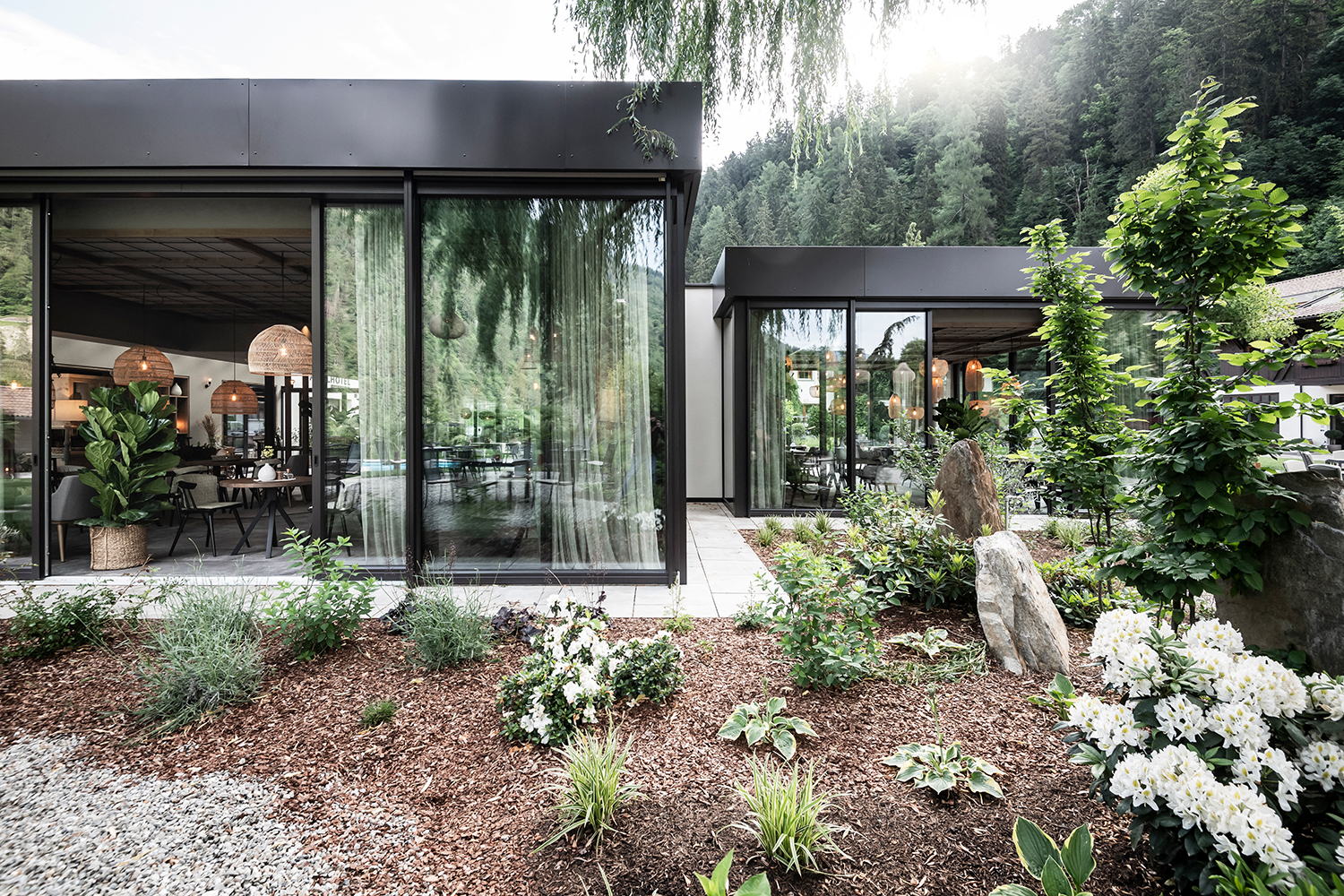 The new garden suites were constructed on the hotel’s East-facing side: three independent buildings with a total of 18 guest rooms across three floors. The saddle roofs absorb the architectural language of their surroundings and the façade blends tradition with modern aesthetics. The buildings’ outer shell has been deliberately kept dark in an ode to the traditional character of a barn house. Meanwhile, a wooden rhombus pattern – created as a transformation of classic wooden struts – gives the three buildings an unmistakably modern flair. 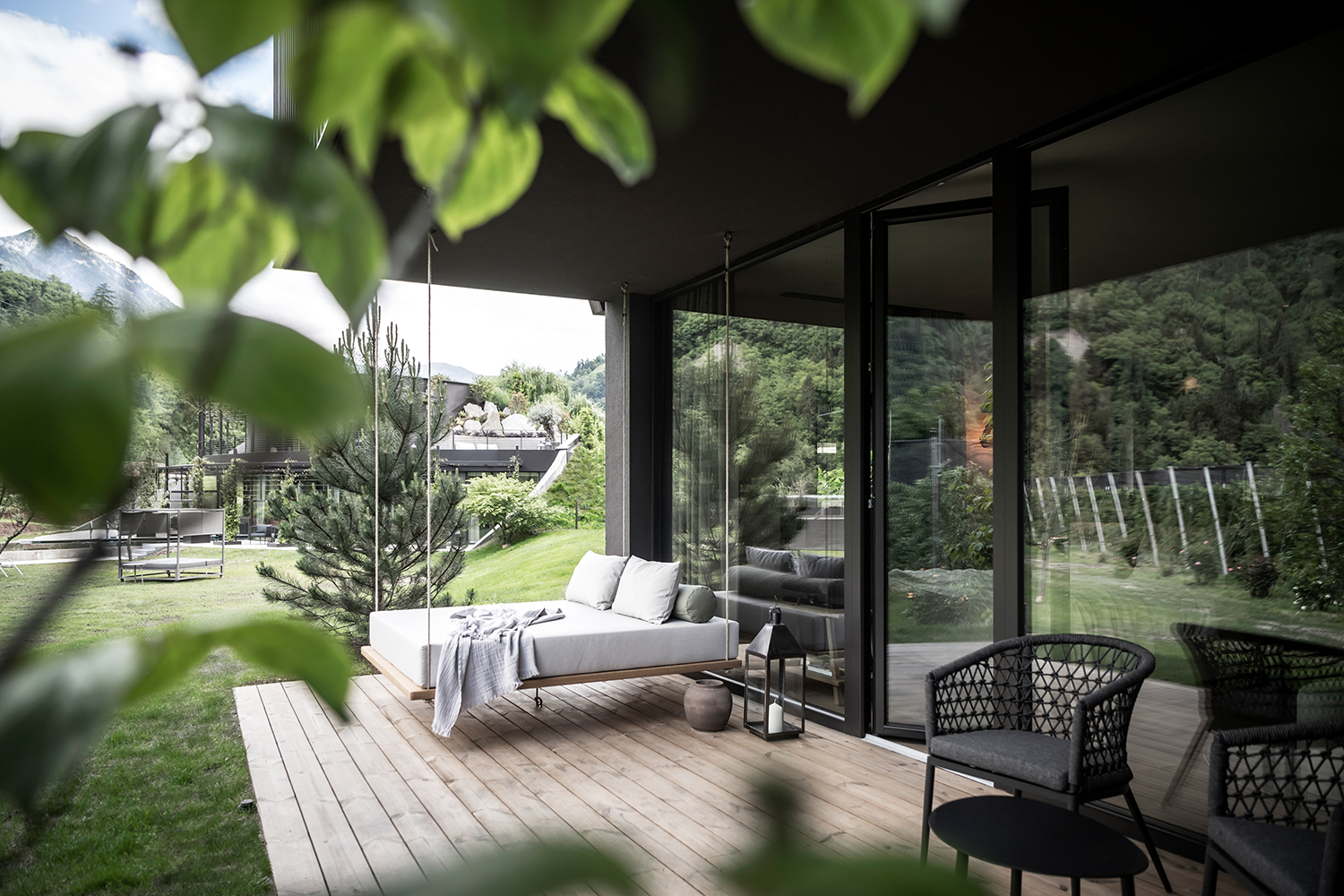 The suites on the ground floor blend into the topography. The entrance and adjacent bathroom are followed by a living and sleeping area which connects out onto the front terrace. Luxurious swinging hammocks with fluffy pillows, which are also seen in the wellness area, lend a relaxed, country flair. Nature and the characteristics of the region play an important role in the interior design. Wood cladding, milling, and coarse natural fibres are used throughout the entire inner decor – the materials run like a thread through all the rooms. The airy terraces are separated with an outdoor linen curtain. 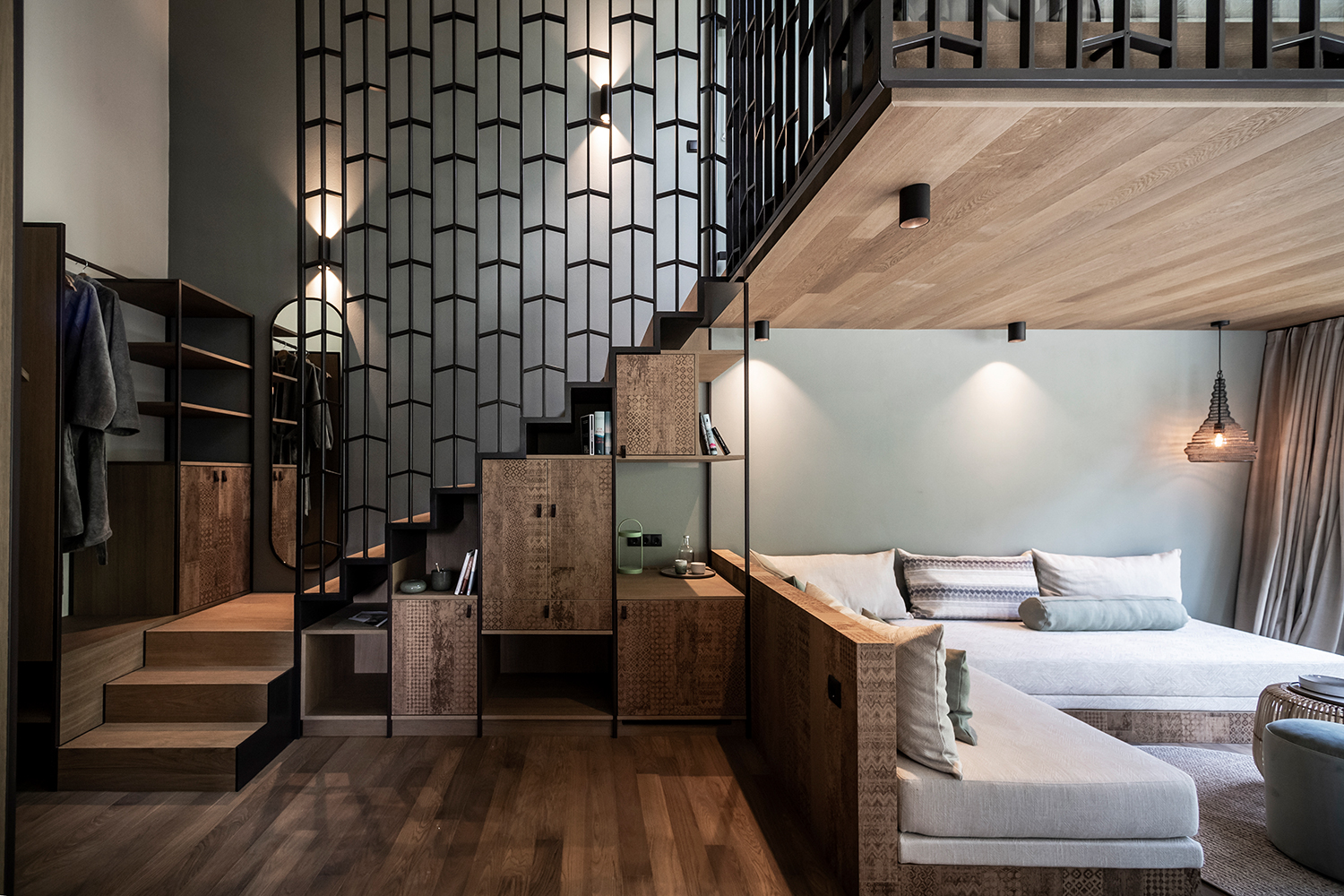 On the ground and the first floor, there are four spacious guest rooms and two outer laying suites, which have a separate sleeping corner for children to play and sleep in. In the suites, the large windows offer a panoramic view of the idyllic landscape, and the feeling of living in and enjoying your own home. The attic gables are perfectly utilized to accommodate a sleeping gallery. An internal staircase leads from the suites up to the galleries, where step-shaped furniture also offers storage space. In every room, a unique atmosphere is created by meticulous attention to detail in design – with elements such as the metal banister purpose-built to wonderfully combine aesthetics and function. 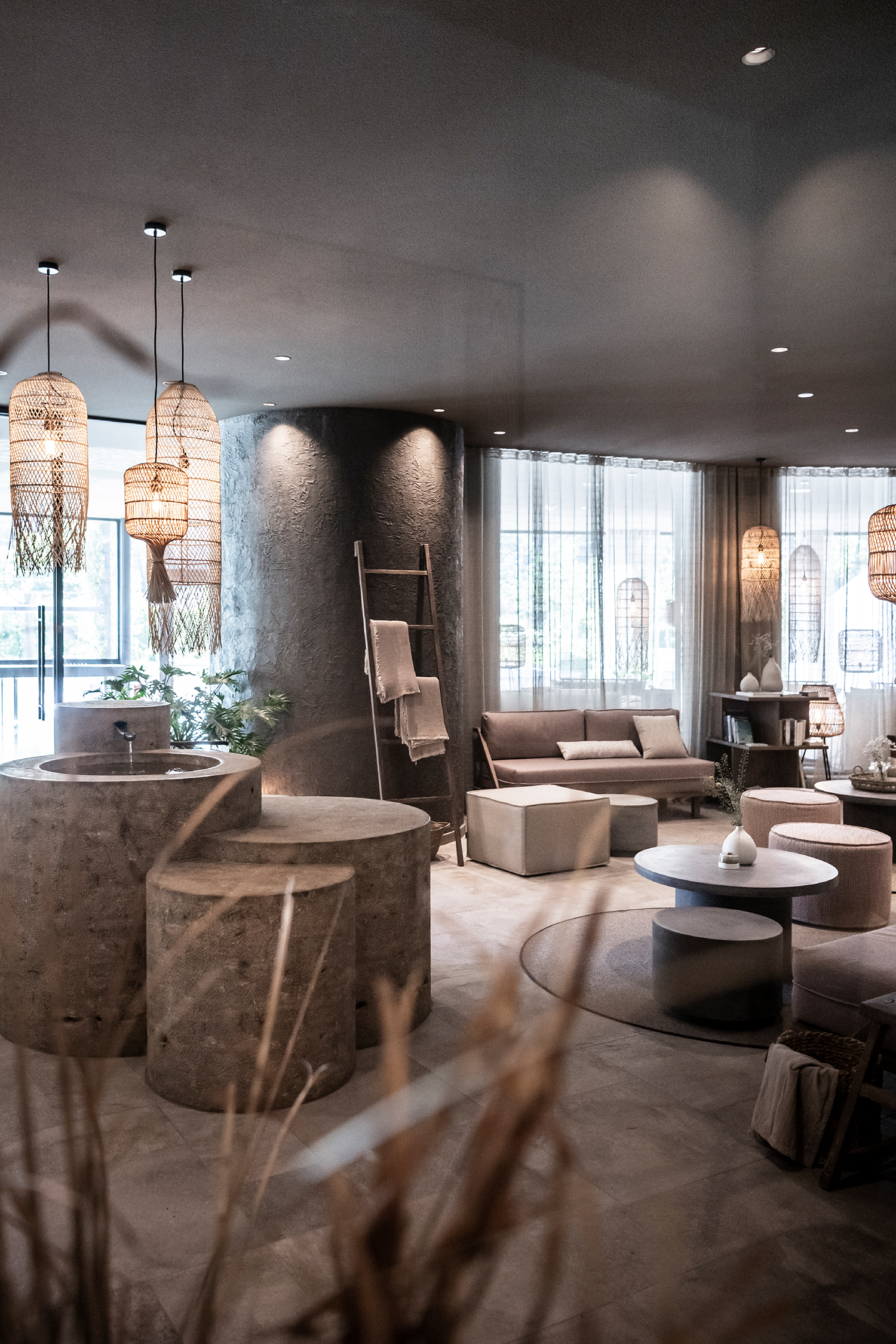 If you bypass the old barn and the impressive 40-year-old weeping willow, you’ll arrive at the hotel’s main building – the place where everything started. The hotel’s restaurant, which in recent years has gained particular popularity by guests coming from near and far, has expanded to include pavilions that roll out onto the garden. Two areas were created: closed, heated canopies, followed by open canopies with shading options grouped in clusters around a piazza of sorts. The grey-brown aluminum of the canopies is designed to harmonize with the warm grey floor tiles while contrasting with the main building’s plaster and wood. 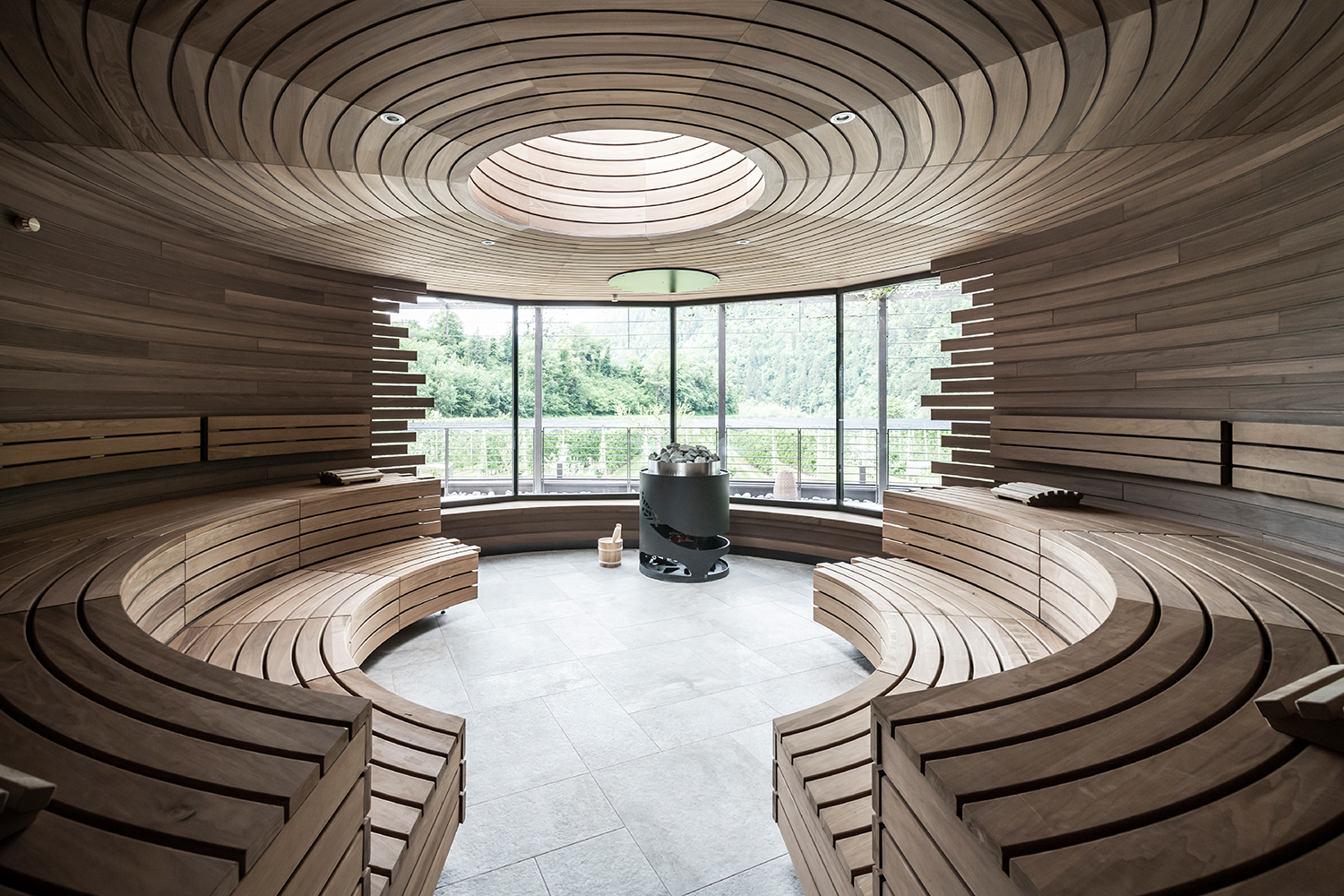 The concept of the restaurant’s expansion design centres around the principle of three rooms or “cubes” with differing heights. The inner decor is based on the theme and mood of a modern winter garden: the ceiling offers a unique structure on which plants and lighting can be flexibly hung. The open space is divided by loose old-styled cupboards and floor-to-ceiling permeable shelves. These shelves function as a transparent room divider, a presentation area for the hotel’s self-made products and as a library stocked with literature on culinary arts. These features create a cosy and inviting living room atmosphere. A natural spring water fountain allows for a refreshing drink. And as a unique highlight – there’s no classic buffet. Instead, guests are invited to tuck into treats displayed on an old planning bench, while in a séparée, a specially designed piece of furniture with fixed and mobile elements provides chilled and warm culinary delights, and can also be used for wine or food tastings. Even the tables and chairs in the light-flooded guest-rooms defy the usual stereotype, with a lively mixture of round and angular displays. 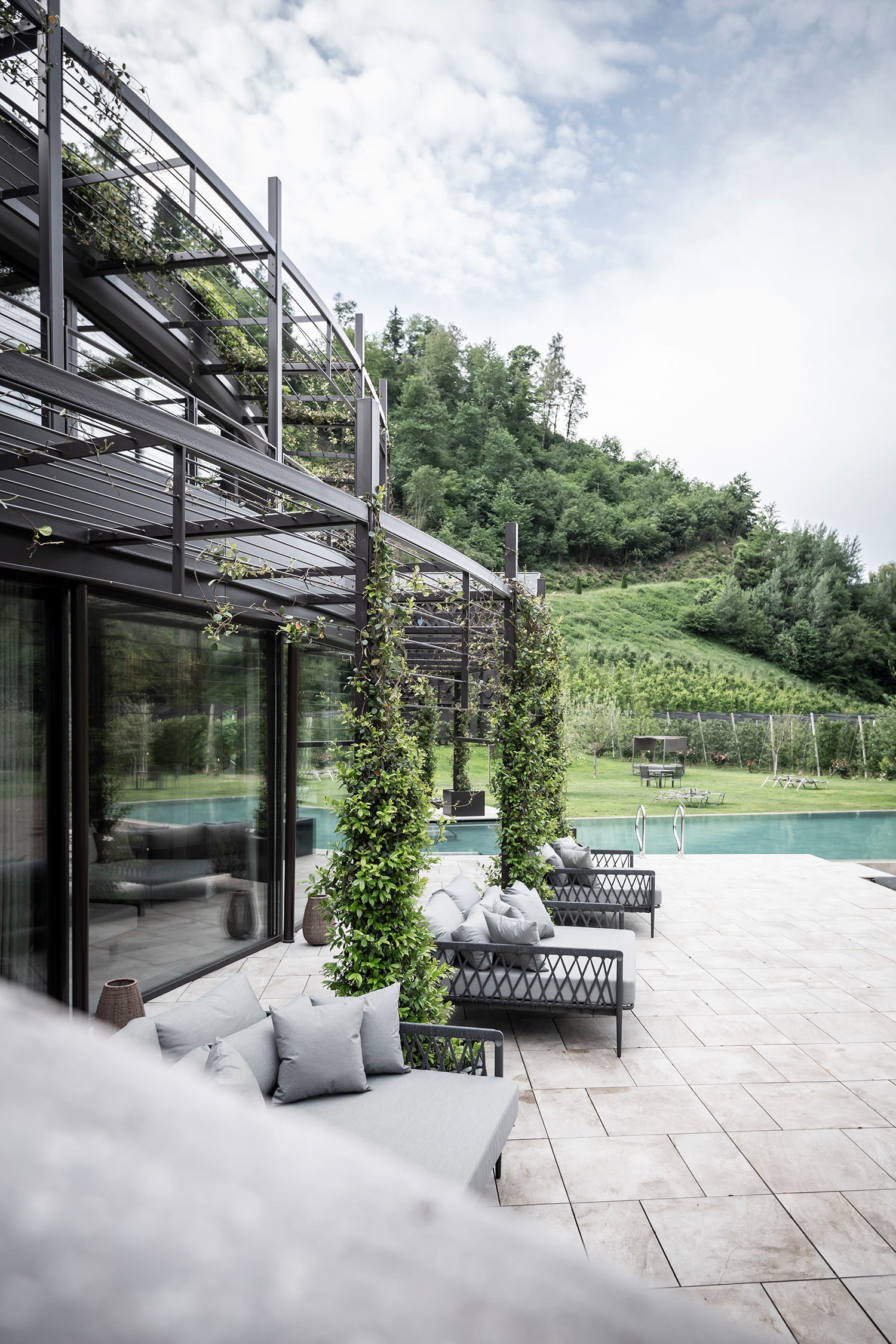 The entire Apfelhotel project reflects the nature and passion of its family-owners, whose aim is to make people feel truly at home, rather than like a hotel guest. Together with noa*, the architecture was created with a great sense of integrity towards this special place, which becomes a unit with nature, ties in with its history, and maintains its own identity through applied design – where occasionally, glimpses of the apple can be seen in the surrounding nature and design.