McLaren has finally released the much anticipated technical information and new images of the McLaren Senna ahead of the car’s public debut on Tuesday, March 6, at the 88th Geneva International Motor Show.

True to the legendary abilities of the racing driver whose name it bears, the McLaren Senna has been designed, engineered and developed to be the ultimate road-legal McLaren track car. With 800PS (789bhp) and 800Nm (590b ft) from its 4.0-litre, twin-turbocharged V8 – McLaren’ s most powerful-ever internal combustion engine in a road car – and the ability to generate a staggering 800kg of downforce, the 1,198kg McLaren Senna delivers the purest possible connection between driver and car. 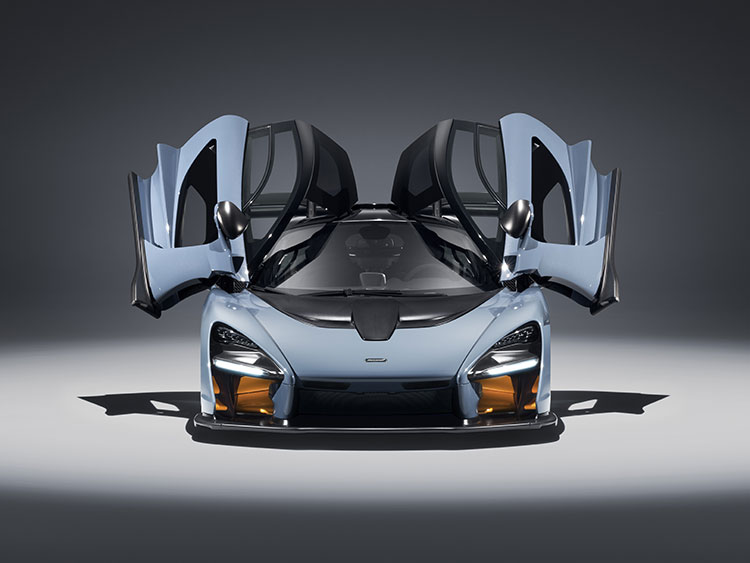 Performance is breathtaking. The McLaren Senna can cover 0–62mph in 2.8 seconds; 0-124 mph is achieved in just 6.8 seconds and a standing quarter-mile in only 9.9 seconds. Impressive though the straight-line acceleration and maximum speed of 211 mph are, the true depth of the performance credentials of the new Ultimate Series McLaren will be revealed when it calls on downforce of up to 800kg on a circuit, against the stop-watch. 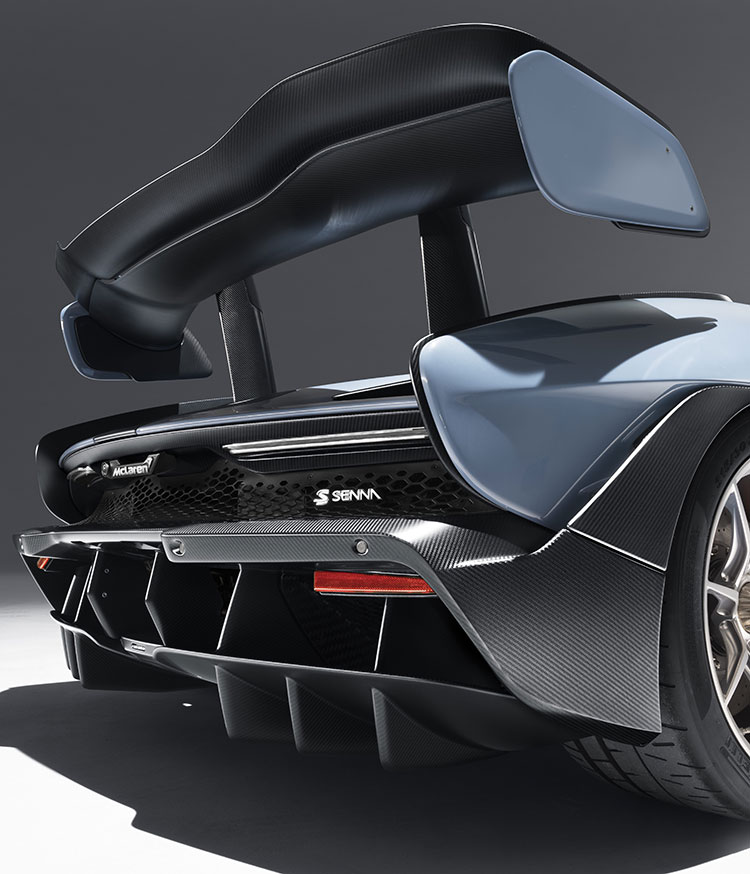 The McLaren Senna is priced at £750,000 (just over $1 million USD,). Just 500 will be built, each hand-assembled in a 300-hour process at the McLaren Production Centre in Woking, Surrey, England.  All are assigned to buyers, the one remaining build allocation having been auctioned in December 2017 at a private event for McLaren customers. The winning bid was £2 million, with the proceeds going to the Ayrton Senna Institute, a non-profit organisation dedicated to providing education for nearly two million unprivileged children and youngsters in Brazil. 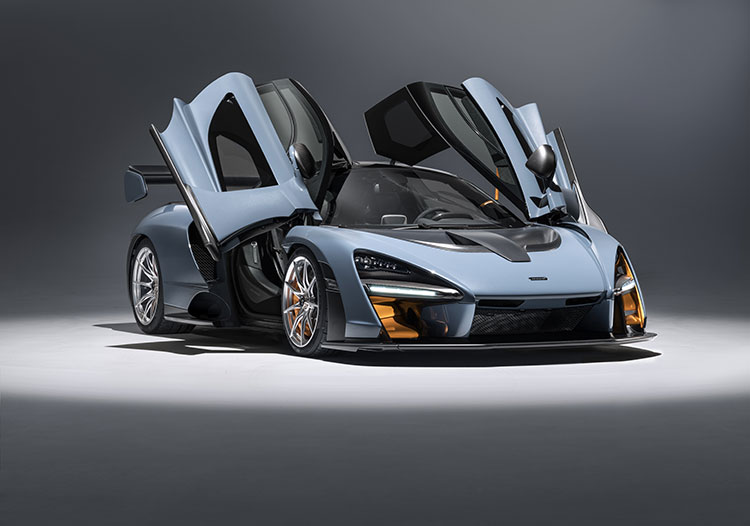 The visual impact of the car is the equal of its savage performance. Organic shapes have given way to an aggressive design language that is ruthless in bending and guiding airflow to meet aerodynamic requirements and the strongest expression yet of McLaren’s ‘form follows function’ philosophy. Proportionally, it is unmistakably a McLaren, but you cannot follow a single body line from front to rear without it passing through a functional intake or vent. 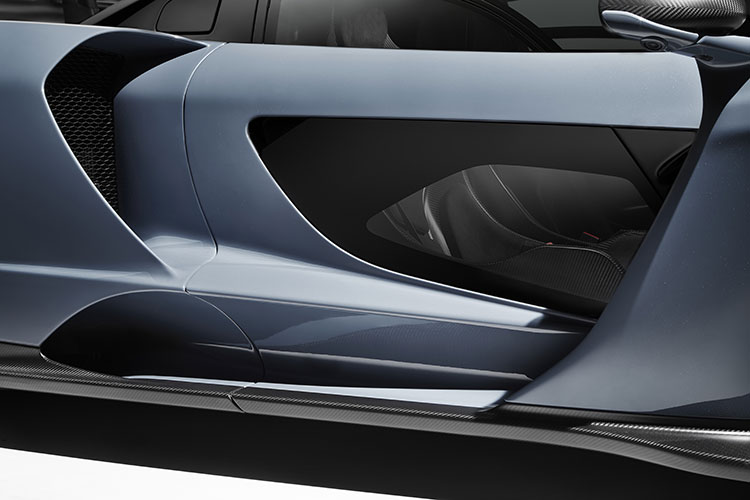 Precise control of airflow begins the moment it hits the nose of the car, the air meeting four surfaces – front splitter; active aero blades: secondary fixed aero blades and slot-gaps located between the headlights and daytime running lights – and being turned by each element in sequence. The design of the rear of the car was born entirely from aerodynamic and cooling requirements, prominent ‘gurney flaps’ ahead of a succession of stepped louvres directing air away from the rear deck and down the sides of the body. The resulting area of low pressure draws hot air out from the high-temperature radiators and engine bay, the louvres ensuring that airflow does not impact rear wing efficiency. Unique slash-cut exhausts make a similar airflow contribution, their positioning and angle negating any disturbance to the wing or rear diffuser. 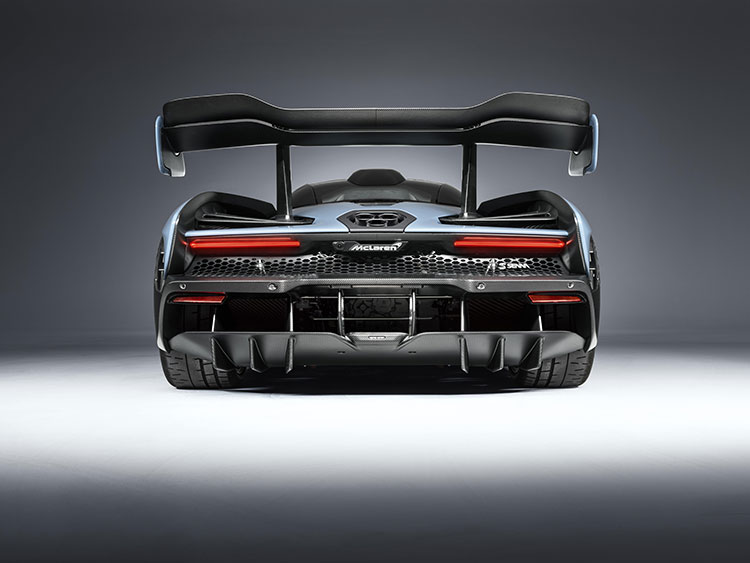 The exhaust pipes exit through the lowest rear deck (measured at the trailing edge) of any McLaren road car, a full 18cm lower than the McLaren Super Series. In contrast to the ultra-low rear deck, the hydraulically-operated, double-element carbon fibre rear wing – a major contributor to the downforce generated – is noticeably high and constantly adjusts to optimise downforce and maintain ideal aerodynamic balance. The wing weighs just 4.87kg, yet can support more than 100 times its own weight in downforce.

The double diffuser at the rear is equally prominent; crafted from a single piece of carbon fibre, it starts under the rear axle and as it increases in height accelerates air out from under the vehicle. This creates a low-pressure zone and ‘sucks’ the McLaren Senna to the ground. 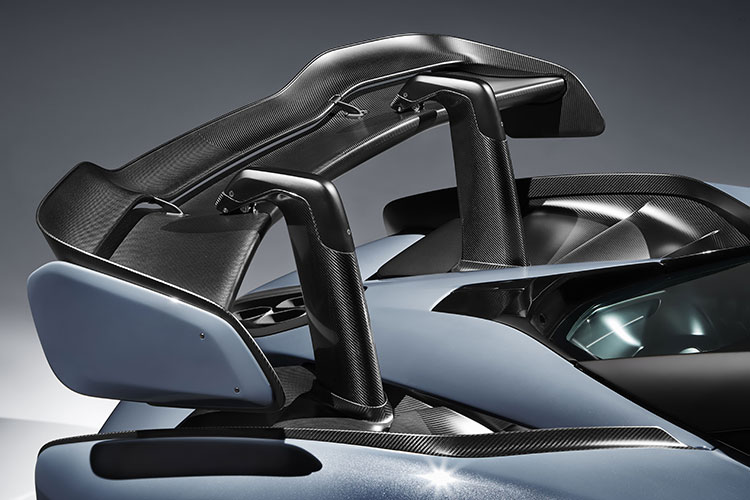 The driver’s seat moves on rails and the foot pedals are fixed – the optimum solution to reduce component complexity and weight. The module to select Drive, Neutral and Reverse is fixed to the driver’s seat and moves with it, ensuring the controls are always close at hand.  Door release mechanisms and window switches have been moved to the centre of the vehicle in a roof-mounted panel. The three-spoke steering wheel, trimmed in Alcantara or leather, is free of buttons and switches to allow a pure focus on the sensory feedback it delivers. The grip offered with and without gloves has been optimised for track driving, as has the design of the wheel itself. Tactile, extended gearshift paddles in satin-finish visual carbon fibre, linked with a rocker switch, are fixed behind the steering wheel.

The driver receives information from the McLaren Folding Driver Display and the central infotainment screen. In Full Display Mode, the folding driver display presents information on an upright TFT screen, with three different layouts depending on whether the McLaren Senna is being driven in Comfort, Sport, Track or Race modes. Linked to the Active Dynamics Panel settings or independently controlled if preferred, the display screen slides down into Slim Display Mode to show only crucial information such as speed, engine rpm and selected gear. This position is designed for circuit driving, where it further improves forward visibility of the track, but will also appeal to those who prefer a simpler display while driving on road. 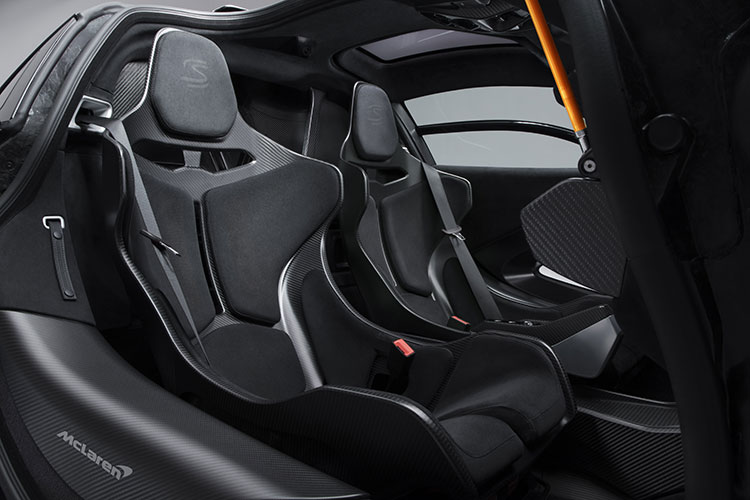 The ‘floating’ central infotainment screen is presented in portrait to increase interior space. It is also angled out and up towards the driver to be easily visible within line of sight even when a helmet is being worn. The edge-to-edge glass screen integrates the Active Dynamics Panel and an 8-inch display that presents vehicle functions to the driver: audio, media, navigation and other features are all controlled using this TFT screen. 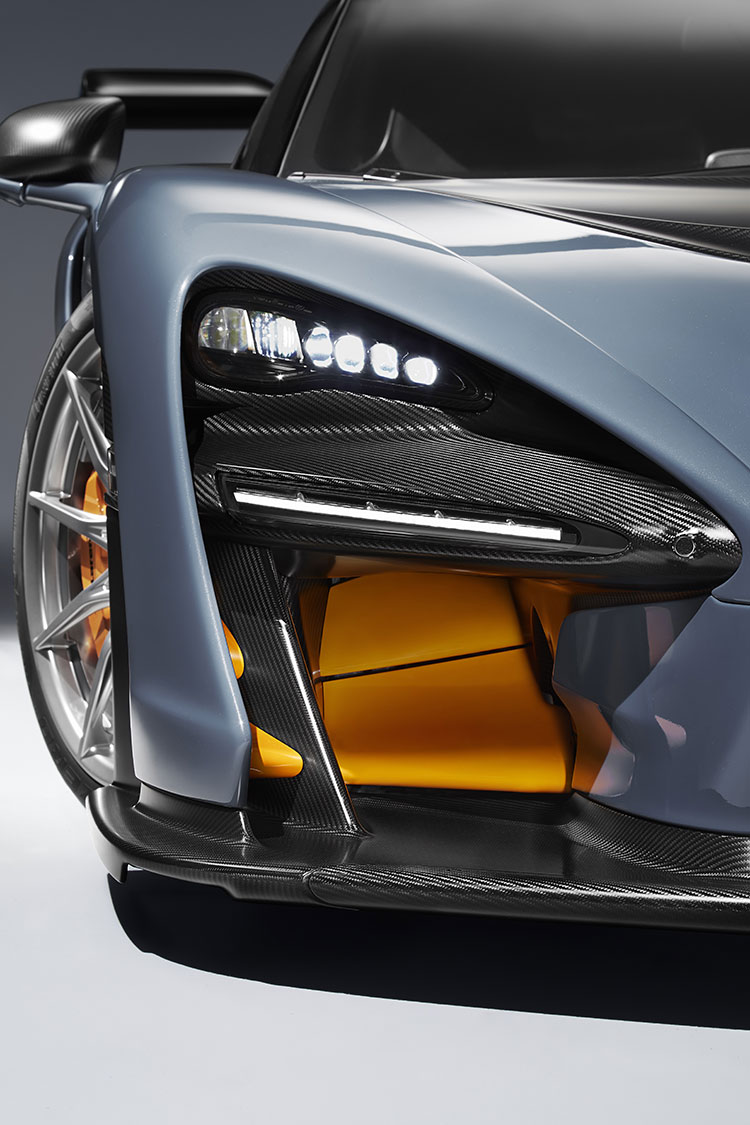 A range of luxury and convenience features are available upon request, including high-grade leathers and a wider ‘Touring’ specification of the Super-Lightweight carbon fibre seat. Parking sensors and a rear-view camera are no-cost options.  Additionally, McLaren has collaborated with Bowers & Wilkins to create an audio system specifically designed for the McLaren Senna, the optional, ultra-lightweight 7-speaker audio system weighing just 7.32kg. 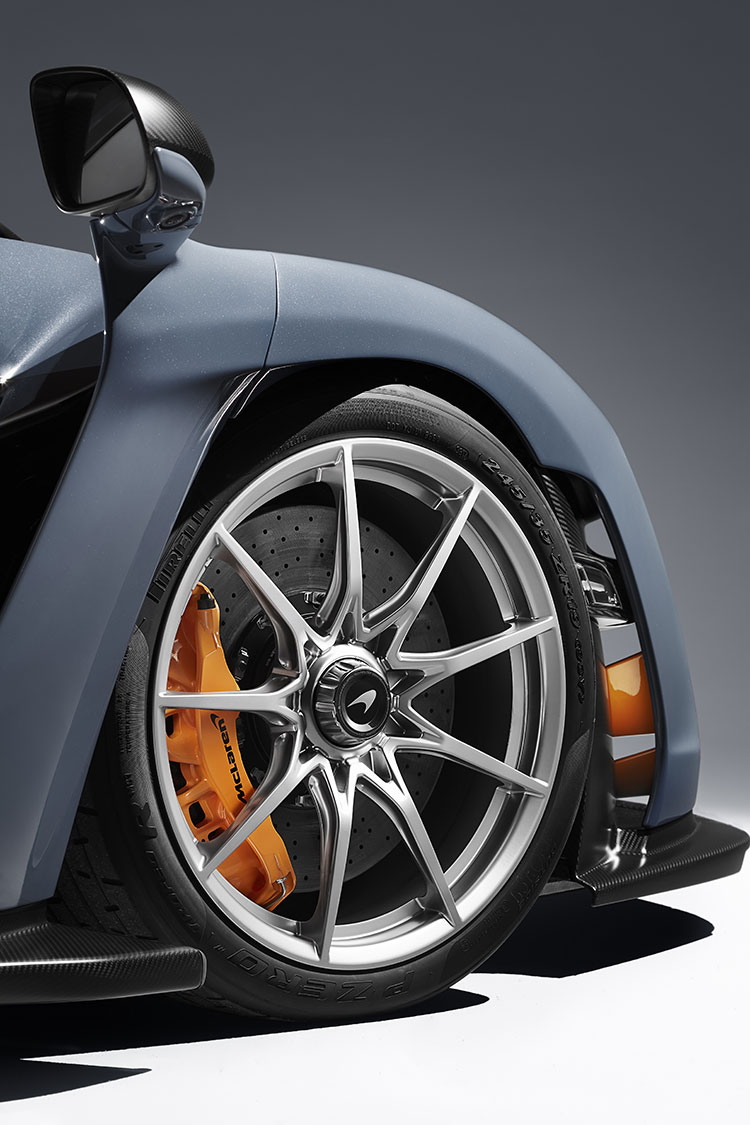