Porsche has unveiled the new Macan in Shanghai. The new Macan stays true to the Porsche design DNA with a three-dimensional LED taillight strip. LED technology also features in the headlights as standard. The most striking innovations inside the vehicle include the 11-inch touchscreen of the new Porsche Communication Management (PCM), re-designed and re-positioned air vents and the GT sports steering wheel familiar from the 911. The PCM enables access to new digital functions, such as intelligent voice control and the online navigation system provided as standard. The vehicle’s range of comfort equipment has also been expanded to include a traffic jam assist, an ionizer, and a heatable windscreen.

Thanks to a number of conscious changes to the exterior, the new Macan now has an even sportier and more modern look. Numerous details reflect the DNA of the iconic 911 sports car and the 918 Spyder. In particular, the topic of lighting plays a key role: The new Macan is equipped with headlights featuring LED technology as standard. This high-quality lighting system featuring modules with a three-dimensional design can be further optimized if desired: The Porsche Dynamic Light System Plus (PDLS) can be used to adaptively control the light distribution. The front end of the Macan has been meticulously re-worked so that it now appears even wider, while the comprehensive overhaul at the rear builds on the sleek design of the predecessor model. The three-part, three-dimensional LED light strip represents another typical Porsche design element at the rear. The four-point design of the brake lights also reflects the brand’s identity. 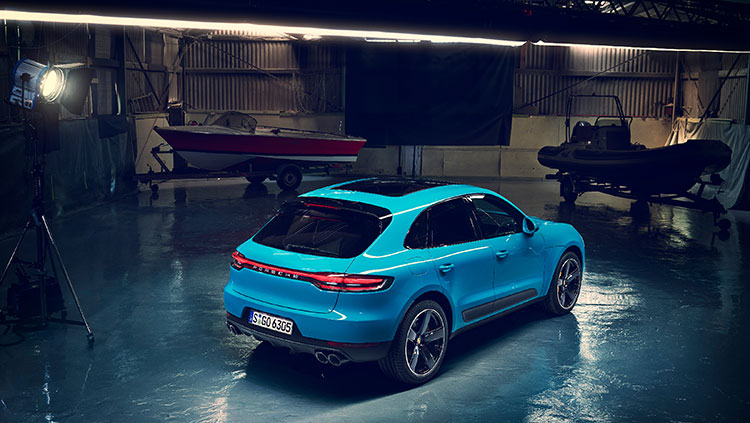 The link to the 911 is consolidated in the interior of the new Macan with the optional GT sports steering wheel. The mode switch plus Sport Response Button integrated into the steering wheel is also showcased in the Macan as part of the optional Sports Chrono Package. Porsche has extended the list of comfort options to include a heated windscreen and an ionizer to improve the air quality in the interior. New exterior colors such as “Miami Blue”, “Mamba Green Metallic” “Dolomite Silver Metallic” and “Crayon” combined with new interior packages ensure that the Macan is now more customizable than ever before.

Porsche has also used the facelift as an opportunity to expand the range of assistance systems in the Macan. The new Traffic Jam Assist including adaptive cruise control enables more comfortable and relaxed driving behavior at speeds up to 60 km/h (37 mph). Not only does the system feature partially automated acceleration and braking – it also assists with steering in a traffic jam or in slow-moving traffic. 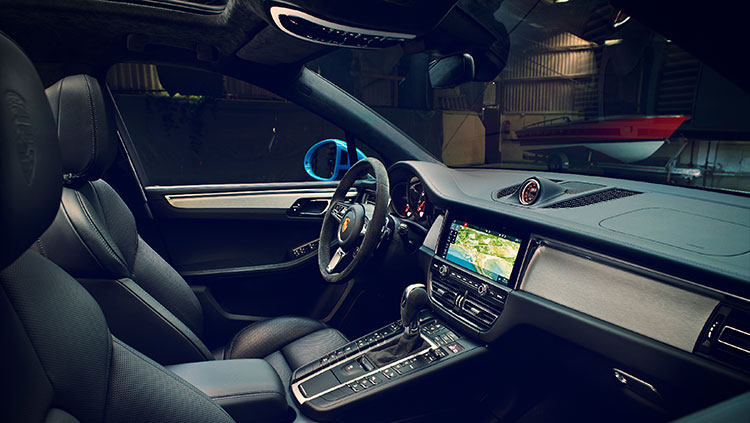 Through the new Porsche Communication Management (PCM), the Macan offers total connectivity and numerous digital functions. Above the typical Porsche rising centre console, a full-HD touchscreen enlarged from seven to eleven inches has been incorporated seamlessly into the newly designed instrument panel. Just like in the Panamera and Cayenne, the user interface on the infotainment system can be customized using predefined tiles. The air vents have also been re-designed and are now positioned below the central screen.

Each Macan is equipped with a Connect Plus module, making every vehicle fully networked as standard. This module underpins various digital functions and services such as intelligent voice control and the real-time traffic information that forms part of the standard online navigation system. One of the key elements of this system is the “Here Cloud” connection, which offers cutting-edge, swarm-based traffic data. Using the new Offroad Precision App, it is also possible to record and analyze off-road driving experiences in the Macan. 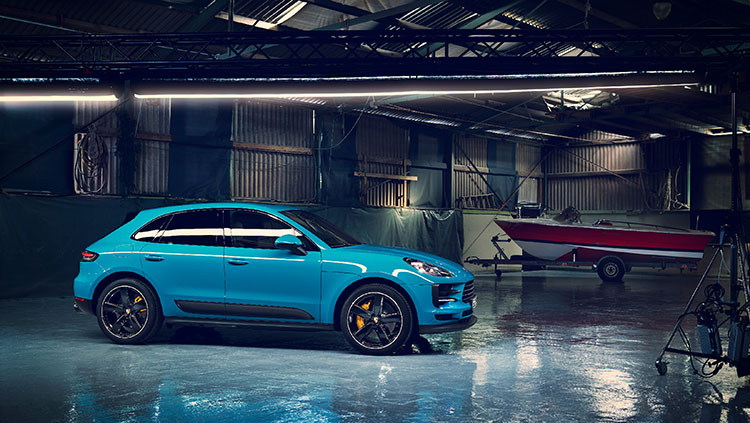 Thanks to its optimized chassis, the new Macan is able to consolidate its exceptional status as a sports car in the compact SUV segment. Fine-tuning of the chassis delivers enhanced neutrality while maintaining stability and improving comfort. Although unusual for the SUV segment, the Macan still features mixed tyres with different widths on the front and rear axles. As with Porsche sports cars, this arrangement enables the driver to take full advantage of the intelligent, all-wheel drive Porsche Traction Management (PTM) when it comes to driving dynamics. Newly developed tyres with improved performance characteristics enable even better lateral dynamics for enhanced driving pleasure, while the new 20- and 21-inch wheels also offer greater scope to customise the design.

The model presented in Shanghai will be offered exclusively in the Chinese market. Other models and markets will follow during the course of the year.