Inspired by James Cameron’s film series Avatar, the Mercedes-Benz VISION AVTR debuts at CES 2020 as a concept for mobility in the distant future. The holistic concept of the VISION AVTR combines the design disciplines interior, exterior and UX on an unprecedented scale. The distinctive inside-out design structure connects inside and outside to an emotional entity and it was inspired by several creatures from the movie Avatar. With its stretched “One Bow” design and organic design language, the VISION AVTR offers a visionary outlook on the design of the future. 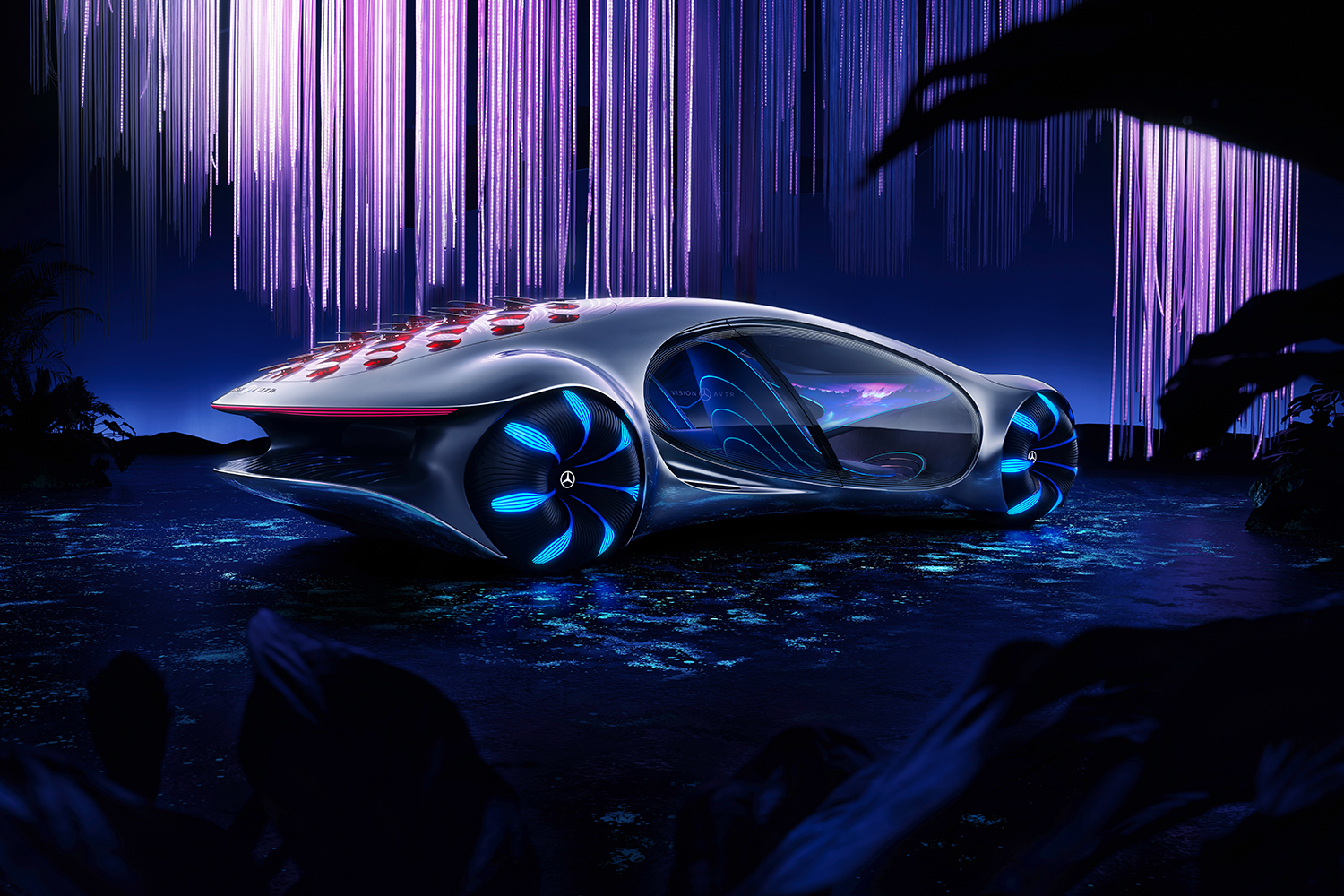 Instead of a conventional steering wheel, the multifunctional control element in the center console allows human and machine to merge. By placing the hand on the control unit, the interior comes to life and the vehicle recognizes the driver by his or her heartbeat and breathing.

By simply lifting the hand, a menu selection is projected onto the palm of the hand, through which the passenger can intuitively choose between different functionalities. For example, real-time 3D graphics can be used to explore the fictional world of Pandora from different perspectives. The curved display module creates the visual connection between passengers and the outside world. 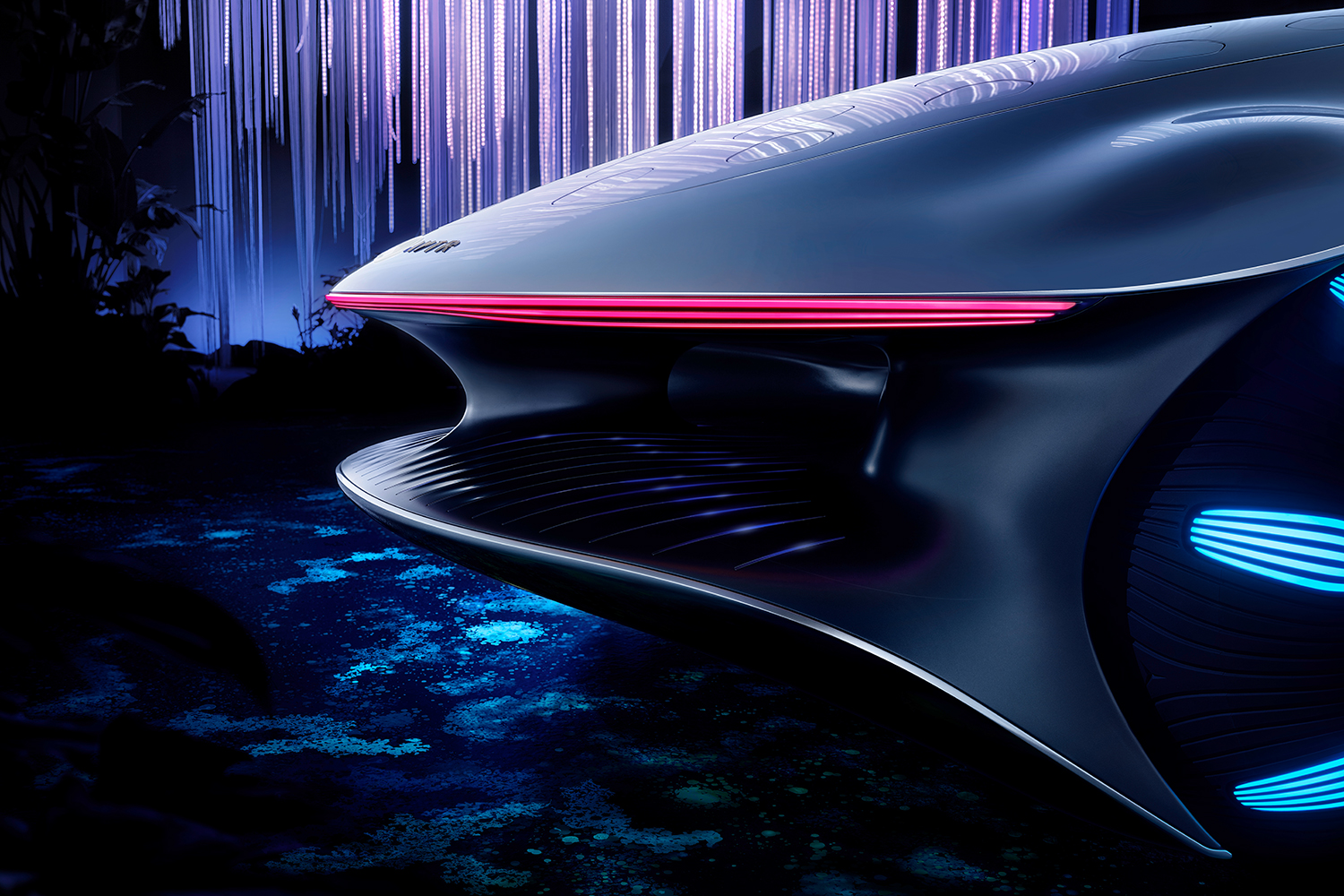 For the first time, the VISION AVTR concept vehicle is using a revolutionary battery technology based on graphene-based organic cell chemistry that is completely clean of rare earths and metals. The materials of the battery are compostable and therefore completely recyclable. In this way, electric mobility becomes independent of fossil resources. As a result, Mercedes-Benz underlines the high relevance of a future circular economy in the raw materials sector. 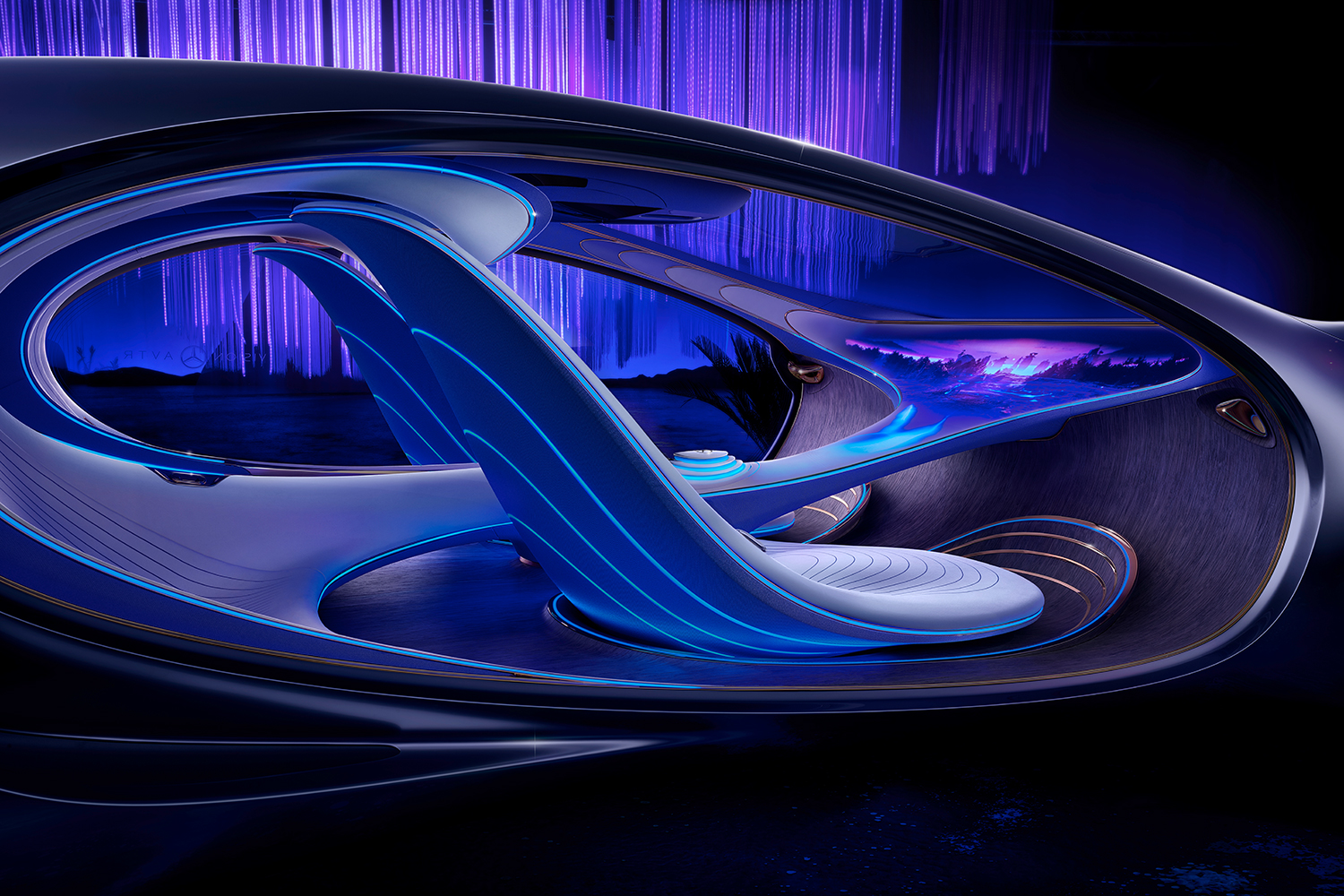 The 33 “bionic flaps” on the back of the vehicle are reminiscent of scales of reptiles. They can communicate with the driver and through the driver with their outside world by means of naturally flowing movements in subtle gestures. Due to the possibility to drive the front and rear axles in the same or opposite direction, the VISION AVTR can move sideways by approximately 30 degrees, in contrast to conventional vehicles. The so-called “crab movement” gives the concept vehicle an animal-like appearance also for its motions. 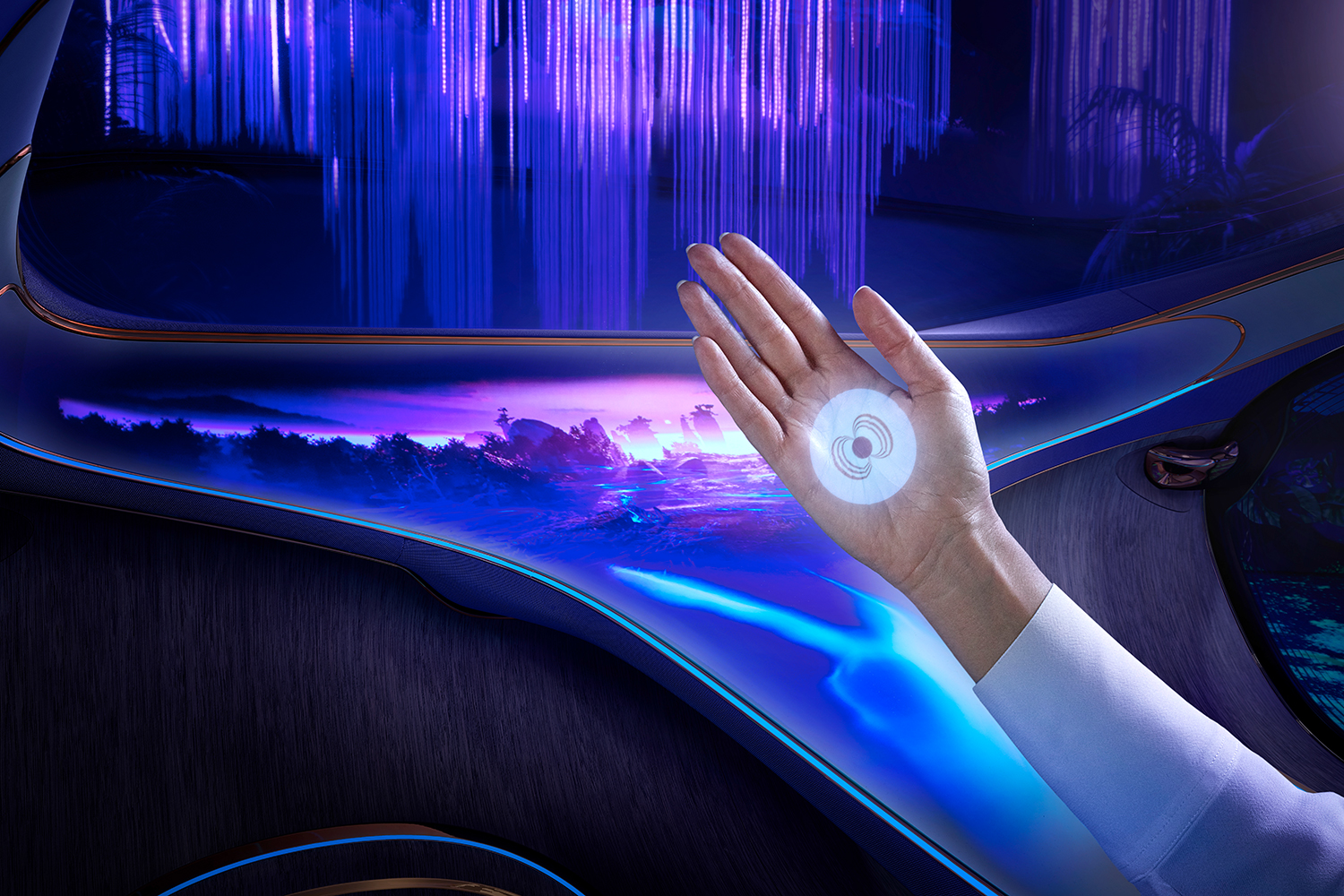 The seats of the VISION AVTR are refined by vegan DINAMICA leather. DINAMICA is the first and only microfiber that guarantees environmental sustainability throughout the entire production cycle. The floor is decorated with an innovative wood called Karuun. The raw material for Karuun (Rattan) grows very fast as a natural raw material and is harvested by hand in Indonesia. The material gives the interior warmth and radiates naturalness. 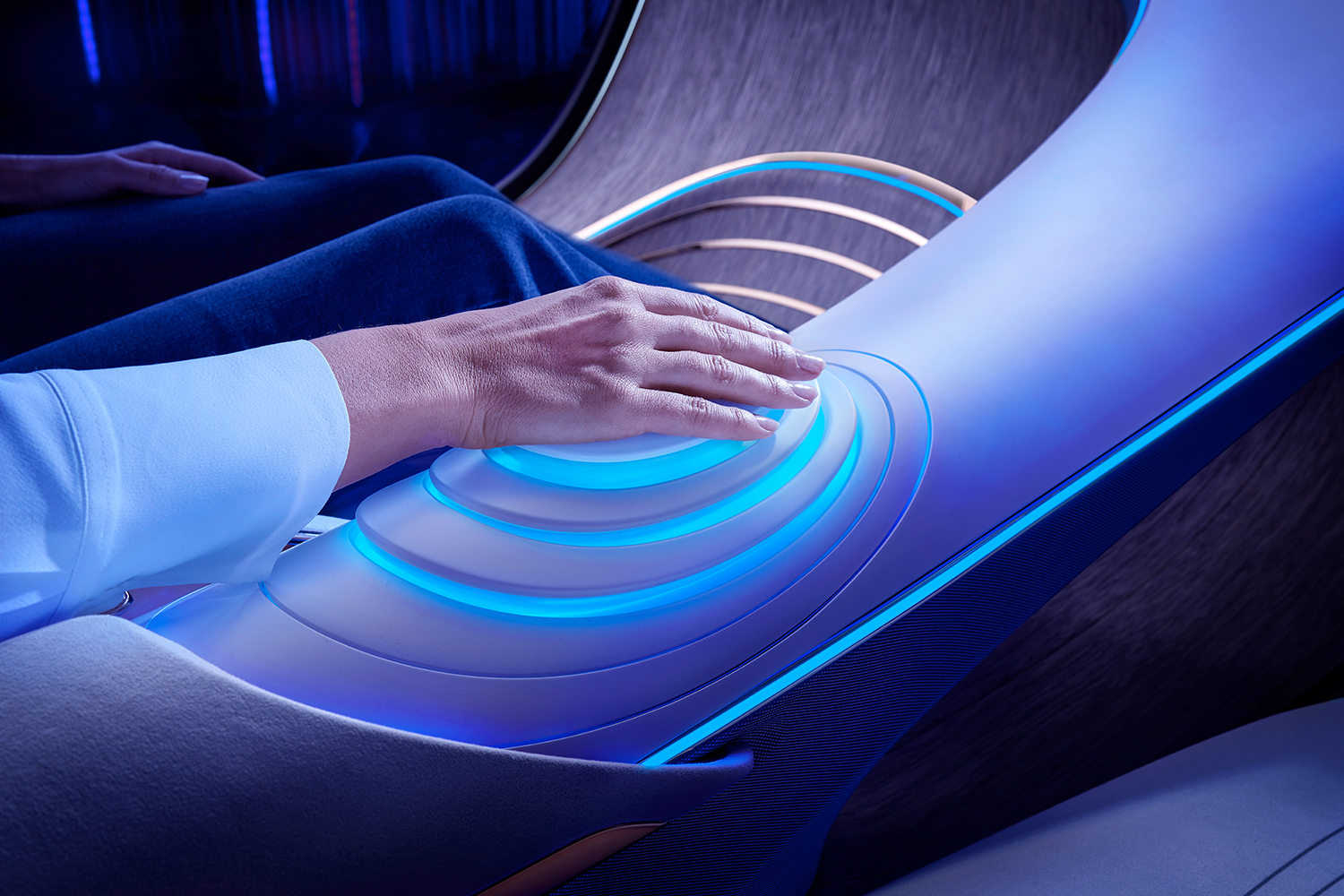 “The main thing in my life right now is sustainability. I look at this vehicle and I see the future. it is not just the automotive future with all the wonderful things it could inspire in real production cars, but also an aspirational future for humans. For a major manufacturing company like Mercedes-Benz to make this commitment is awesome and I think it should be celebrated. When I look at this beautiful car, I see the physical manifestation of the velocity of an emotional, spiritual idea. They manifest and inspire,” explains James Cameron, director, screenwriter and producer of Avatar, at CES 2020.