The new proposal introduces two L-shaped elements that encompass those functions that the new owner, a single man, required with a certain independence: a first L-shape partition, oriented towards the access, houses the kitchen area; and a second L-shape partition houses the bedroom spaces with bathroom en suite. 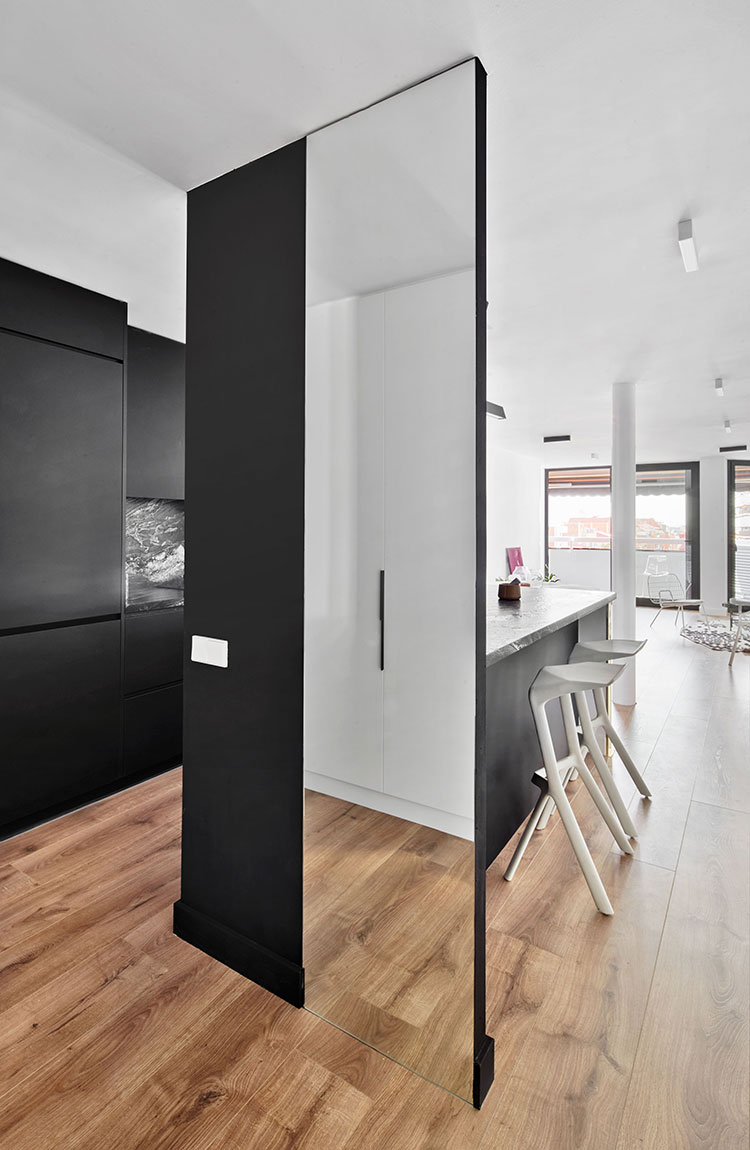 The rest of the space is intended to flow freely inside, to maximize the sense of space and abolish the boundaries between rooms: for example, both the bedroom and the guest bathroom are closed with large oversized pivoting doors, from floor to ceiling, with no perimeter frames. This means that the partitions are not only interrupted when arriving at the doors gaps(there are no lintels), but when they open, the communication is total and the space sneaks through, extending the common spaces to these rooms whose use is expected to be occasional, thus avoiding that they remain closed and residual. 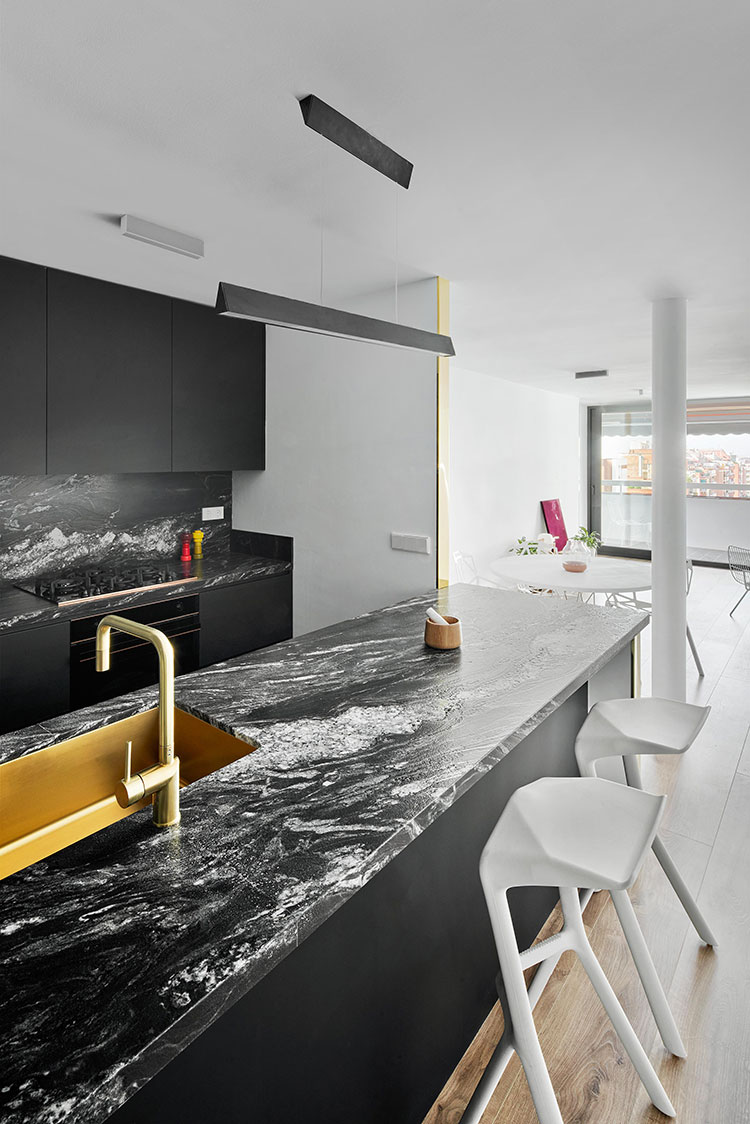 Similarly, the study area is an ambiguous space that connects to the common spaces through a new pivoting door, similar to the previous ones, but this time of glass, which in turn connects to the bedroom through two large sliding doors that also do not reach the ceiling, and that in their composition of different types of glass, draw superimposed figures that blur the dominant axes of the rooms. 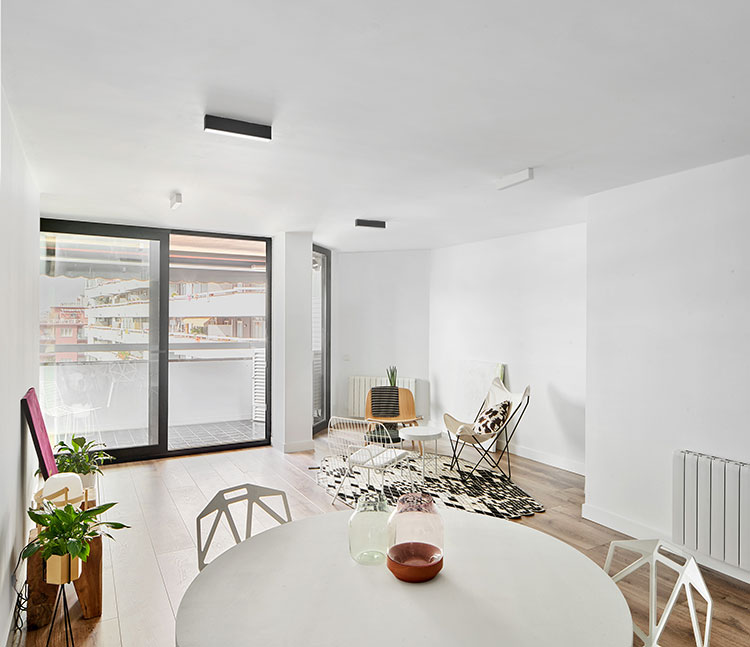 This spatial treatment of blurring the boundaries is the same as that of the areas of the two L-shaped elements mentioned above: the kitchen is focused towards the entrance, but at the same time it is separated from it with an independent partition, cladded with a large mirror that blurs the narrowest passage to the kitchen; and simultaneously it opens into the living room through an island that exceeds its limits. 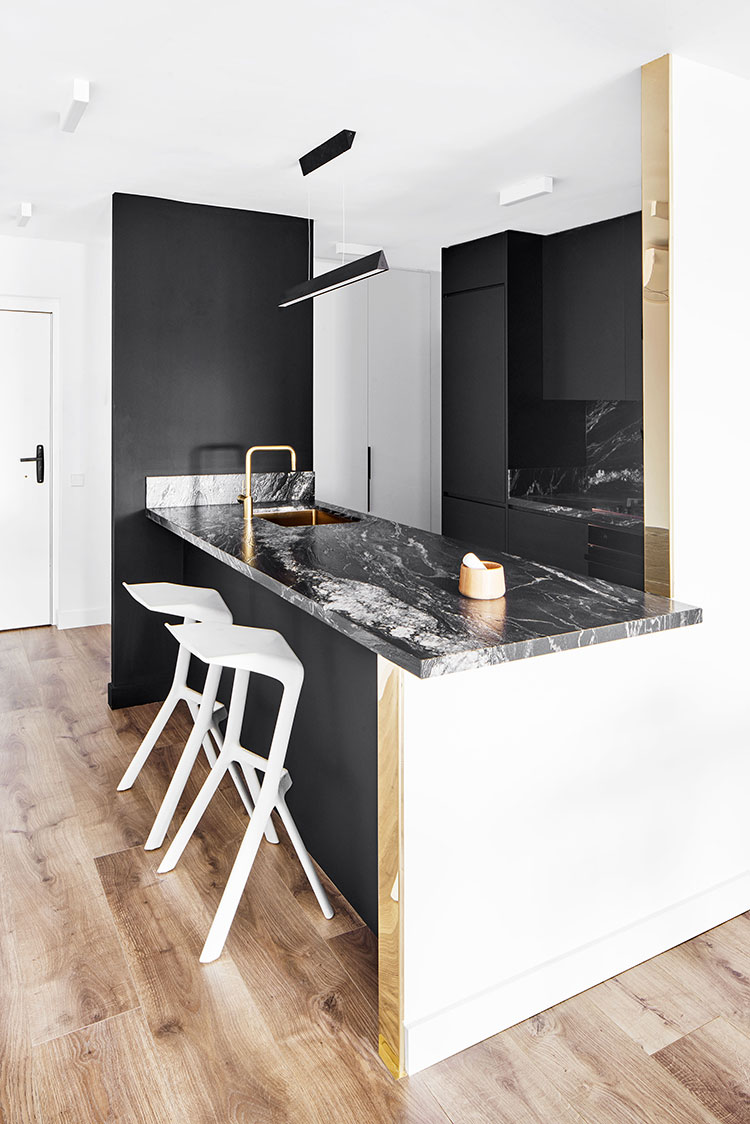 Likewise, the bedroom has been undone in several rooms; the anteroom of the same is the study area, communicated with the bed area (separated by the sliding glass doors but communicated by the top of them), and the bathroom is accessed from the bed area, this space more secluded and private. 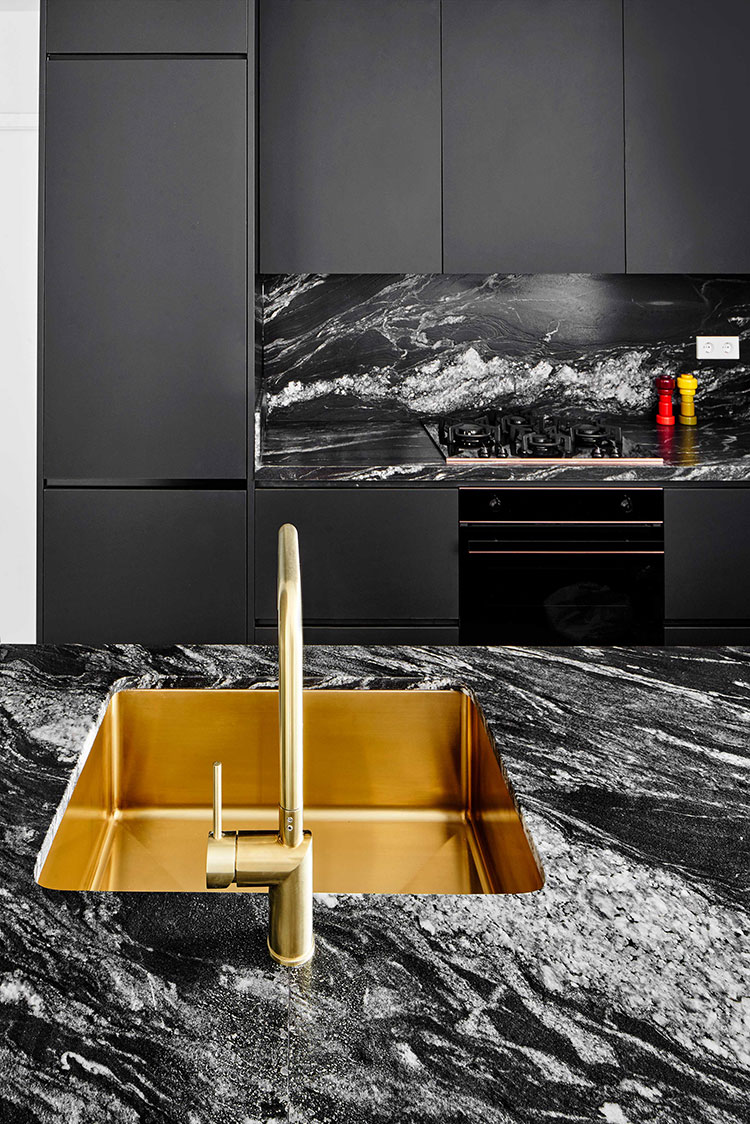 The material treatment accompanies the spatial concept, insinuating the position of each use in rooms that otherwise have no defined boundaries. Although the kitchen is housed in a more or less recognizable room, its color is black, and golden details in brass (the faucet, the sink) contrast the black surfaces; the large pivoting doors of the guest rooms are lacquered in black, and their handles again in brass, highlighting the interruption of the white walls; the bathroom suite is completely black, a mix of ceramic, granite, microcement and black varnish, and with taps, sinks and other accessories all in black. 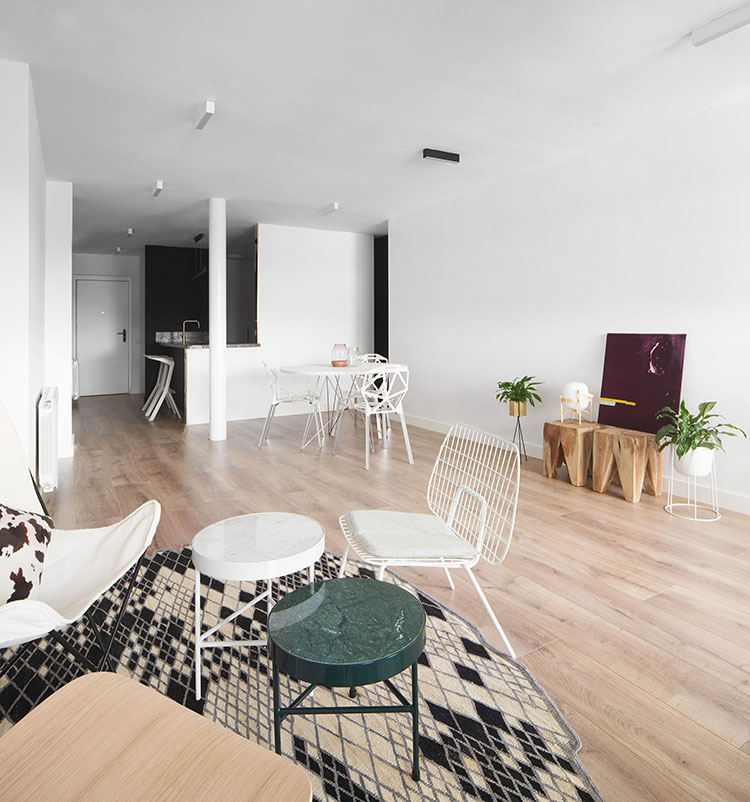 On the contrary, the guest bathroom has the opposite treatment, here the granite, the microcement and the varnish are all white, although the wash basin and faucets are kept in black. The sliding and pivoting doors of iron and glass draw figures that blur the axes, but also mark areas of privacy and more visible areas. 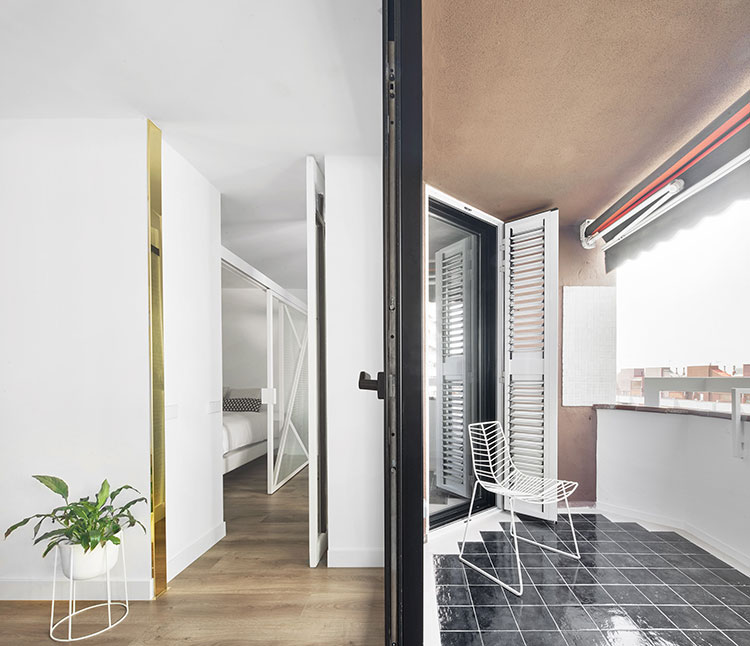 The lighting fixtures play alternating blacks and whites; the furniture is made of white lacquered wood and all the handles are black. Even the new flooring of the exterior terrace, whose walls had to preserve the original color, mark a perimeter band of white microcement that inside receives a fragmented black tiling, as an exterior carpet.

Two bands of brass cover the edges of the two L-shaped elements that organize the interior, highlighting its spatial importance, and its independence from the rest of the partitions. 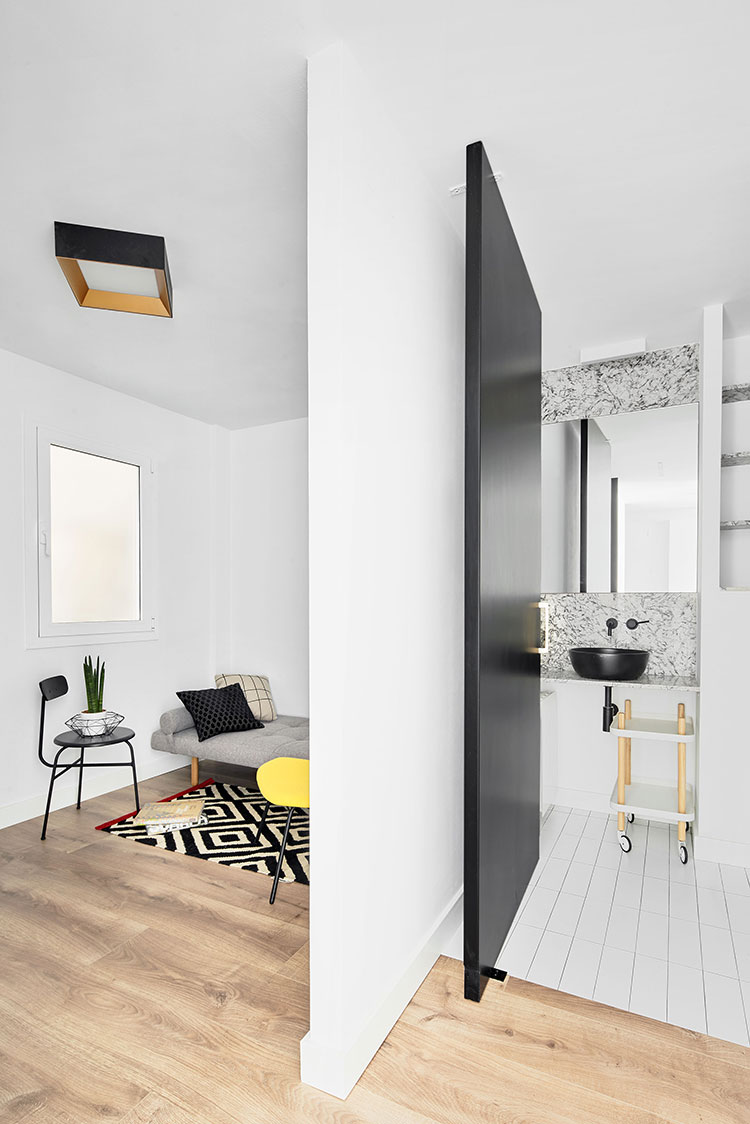 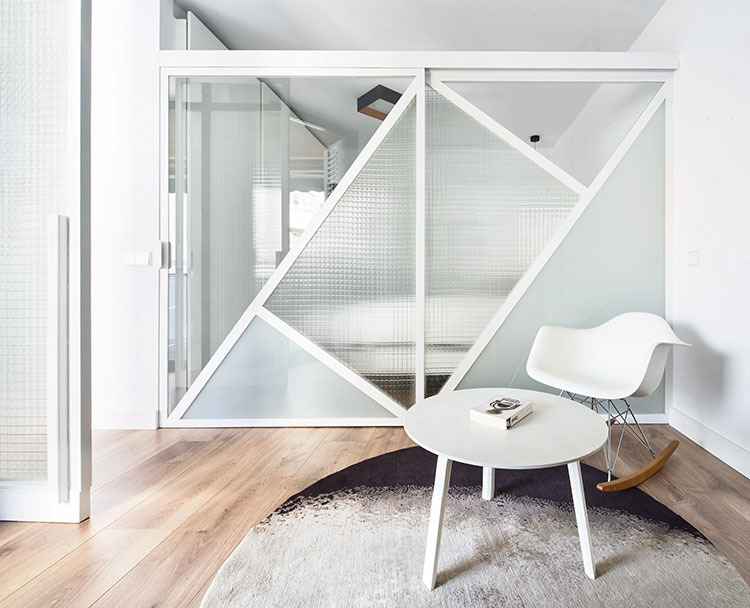 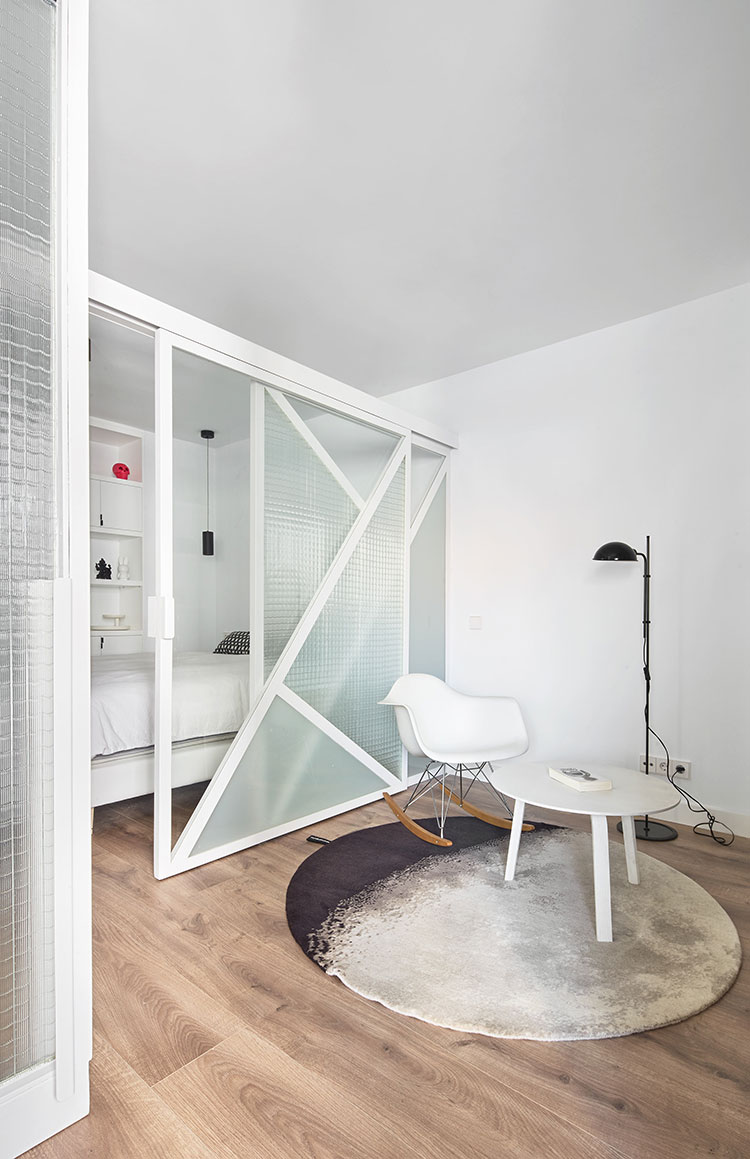 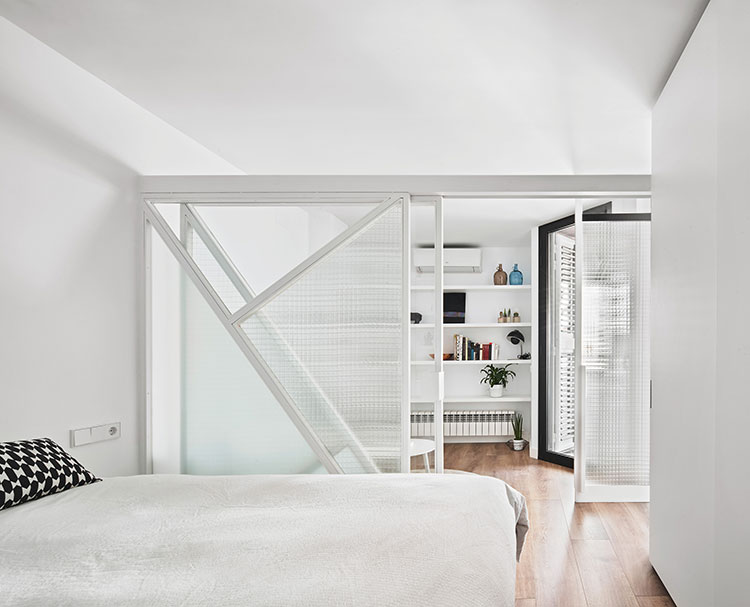 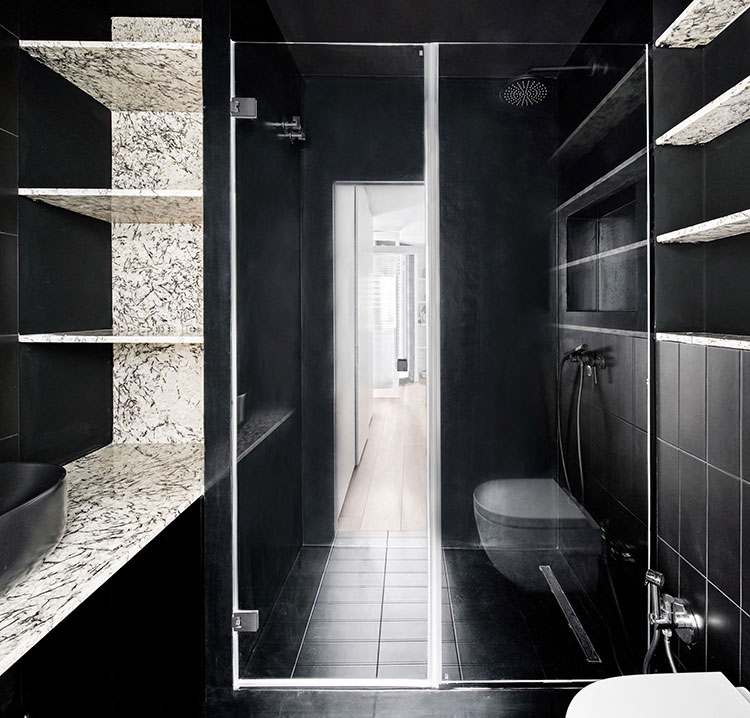 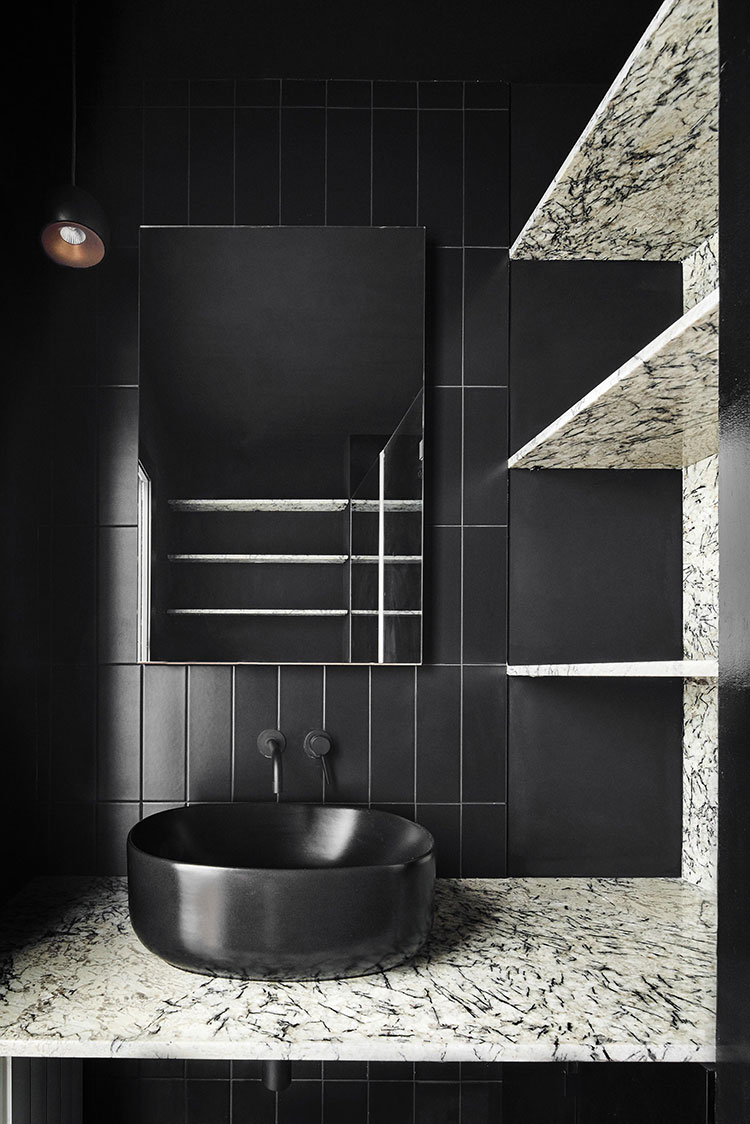