JKMM Architects has recently unveiled a series of domed subterranean galleries for the new Amos Rex museum in Helsinki. The Helsinki-based practice has renovated Lasipalatsi, a functionalist 1930s building in the Finnish capital, to provide a new home for the former Amos Anderson Art Museum, now called Amos Rex.

The Lasipalatsi has been comprehensively refurbished as part of the project, with special care given to preserve original features that include the first external neon lighting in Finland. Detailed research from historical sources as well as analysis of material on-site, conducted in partnership with the Helsinki City Museum, allowed JKMM to recreate a palette of materials and colors that are true to the original design. 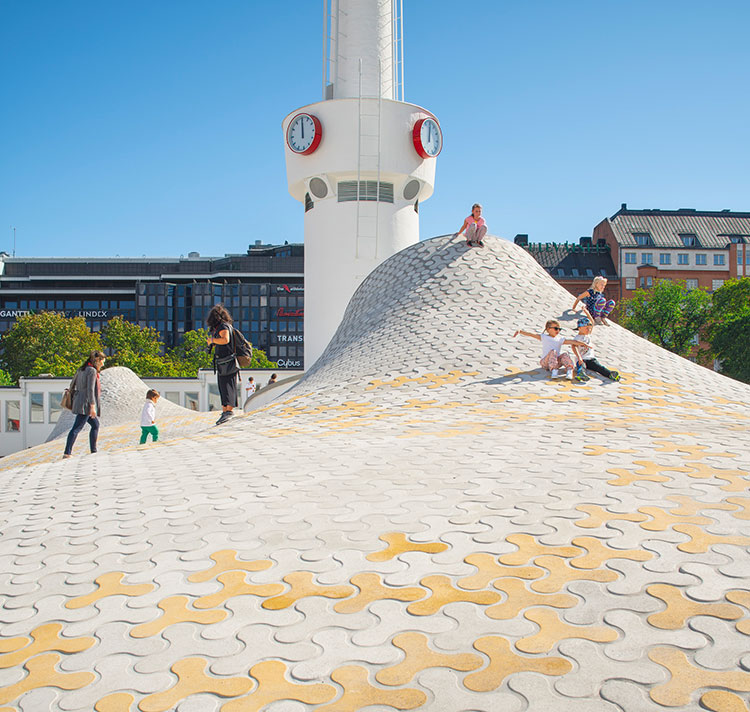 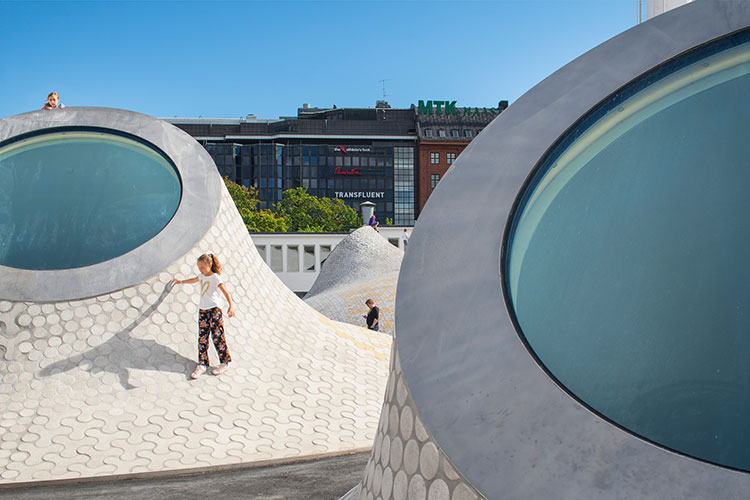 Bio Rex, the 590 seat cinema within the Lasipalatsi building has been restored to its 1930s glory and incorporated into the new institution, giving half of its name to create the Amos Rex identity.

From the foyer of the refurbished Lasipalatsi, visitors descend a staircase past a picture window that affords views over the public square, into the basement galleries. 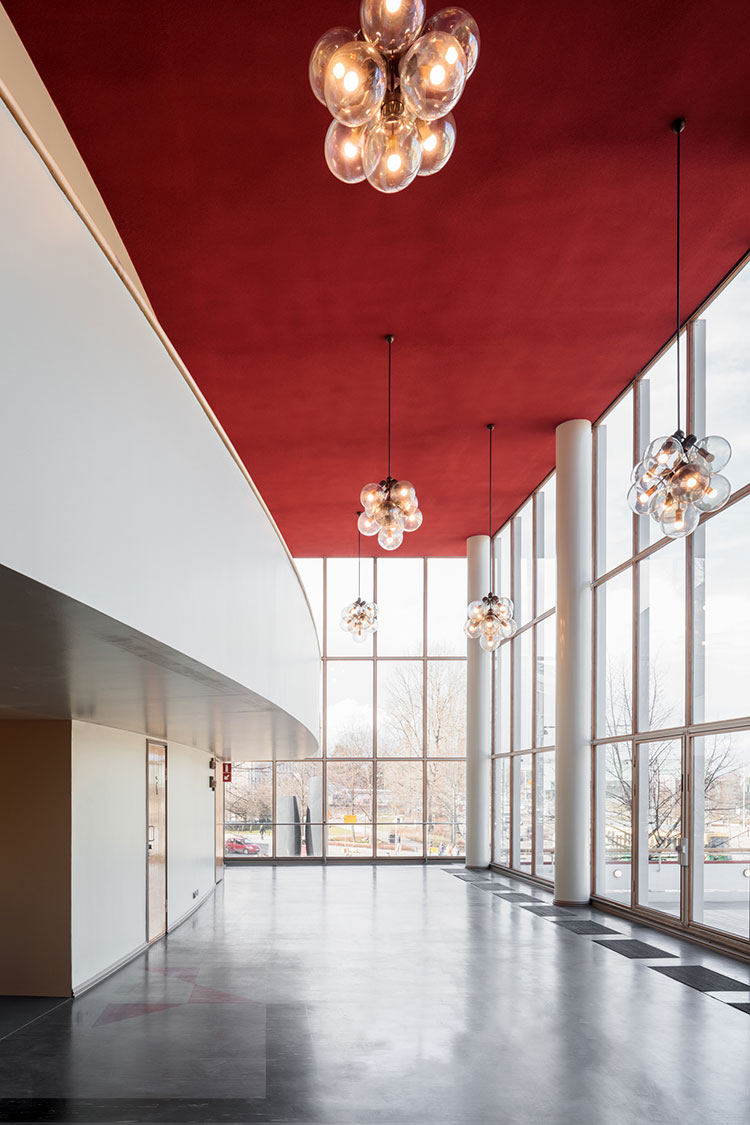 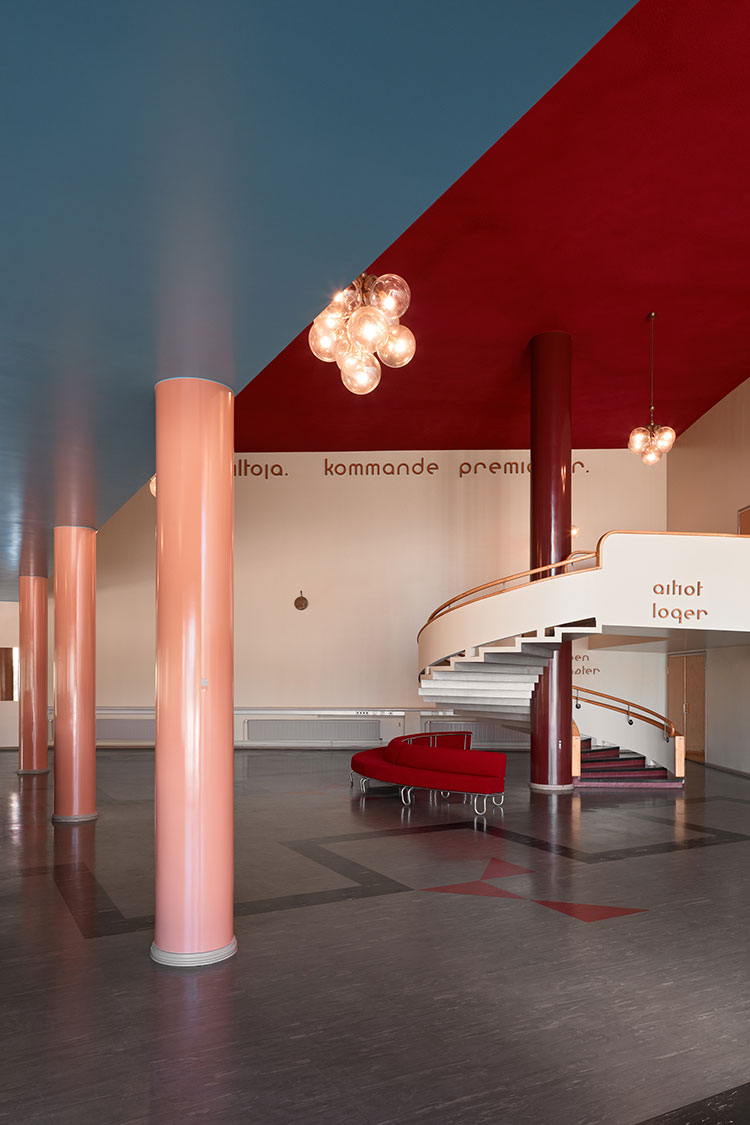 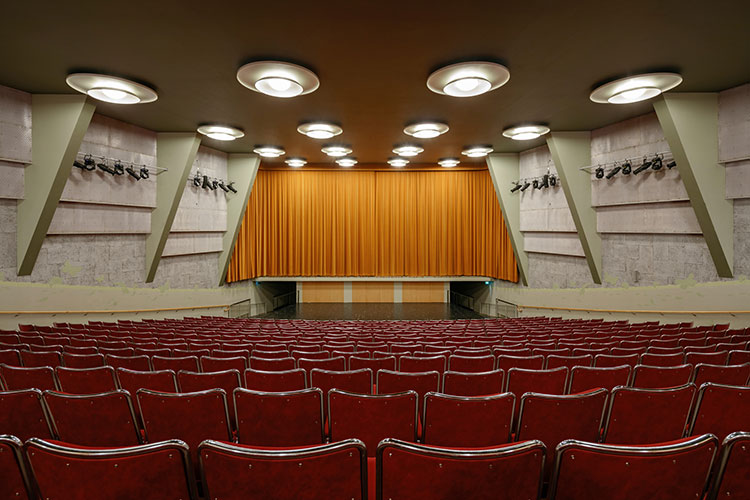 The roof of the new gallery is formed by a series of domes with angled roof lights that frame views of the surrounding buildings and allow exhibitions to be lit with natural light if the curators choose. The shape of the domes is expressed in the topography of the newly landscaped public square which sits above the galleries, as a series of gently rolling forms clad in concrete tiles. 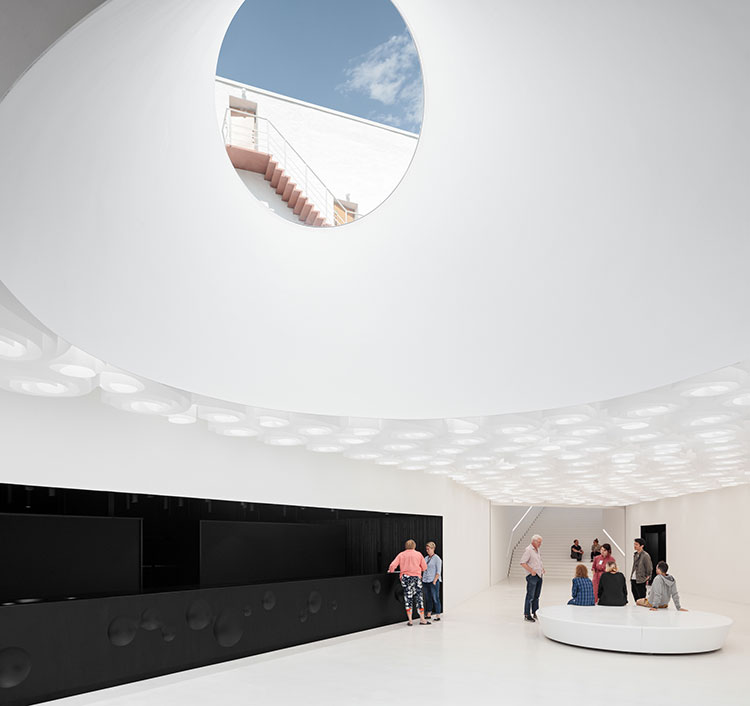 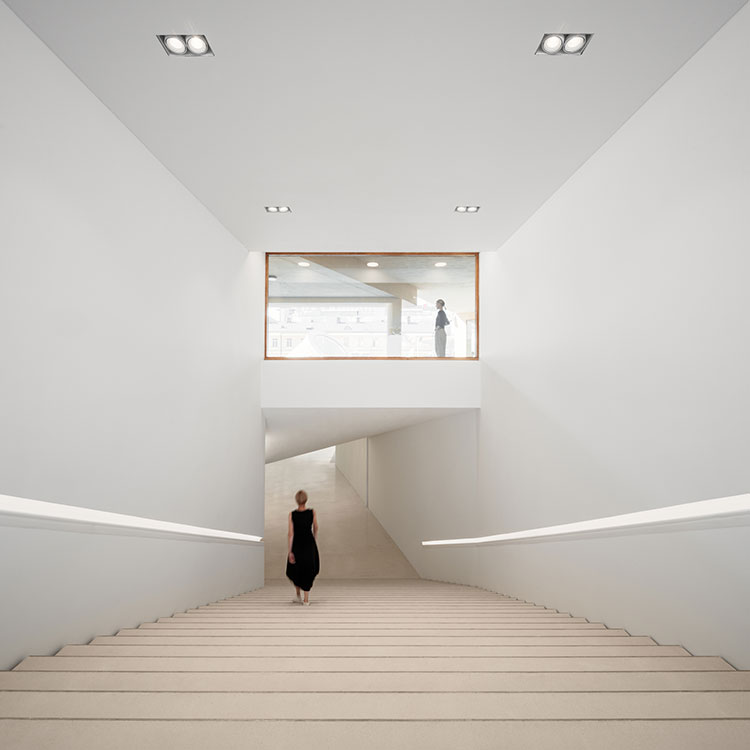 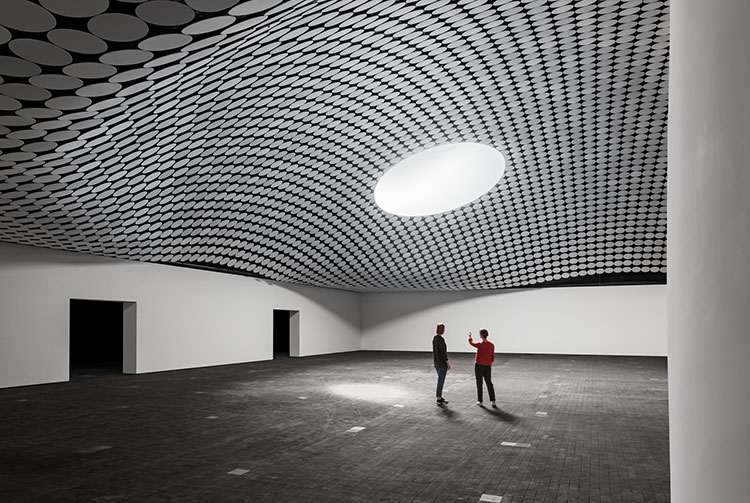 The existing restaurants and shops within the Lasipalatsi will continue to trade and will help contribute to the life and activity of the public square, which is a focal point for the social life of Helsinki city centre and one of the most important public spaces in the shopping and entertainment district. The square also provides an opportunity for Amos Rex to create a programme of outdoor events to support its gallery shows.

The gallery will be supported by world-class technical and storage spaces in an additional basement story beneath the galleries, giving Amos Rex the necessary facilities to loan artifacts from other institutions internationally. 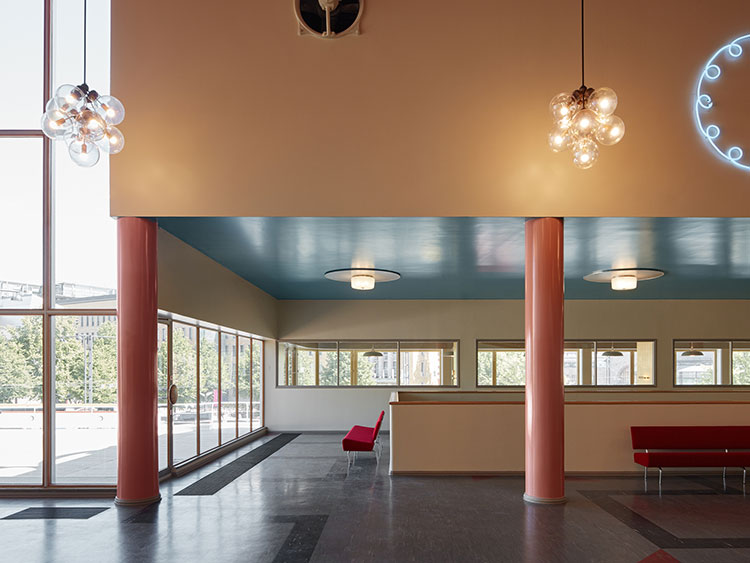 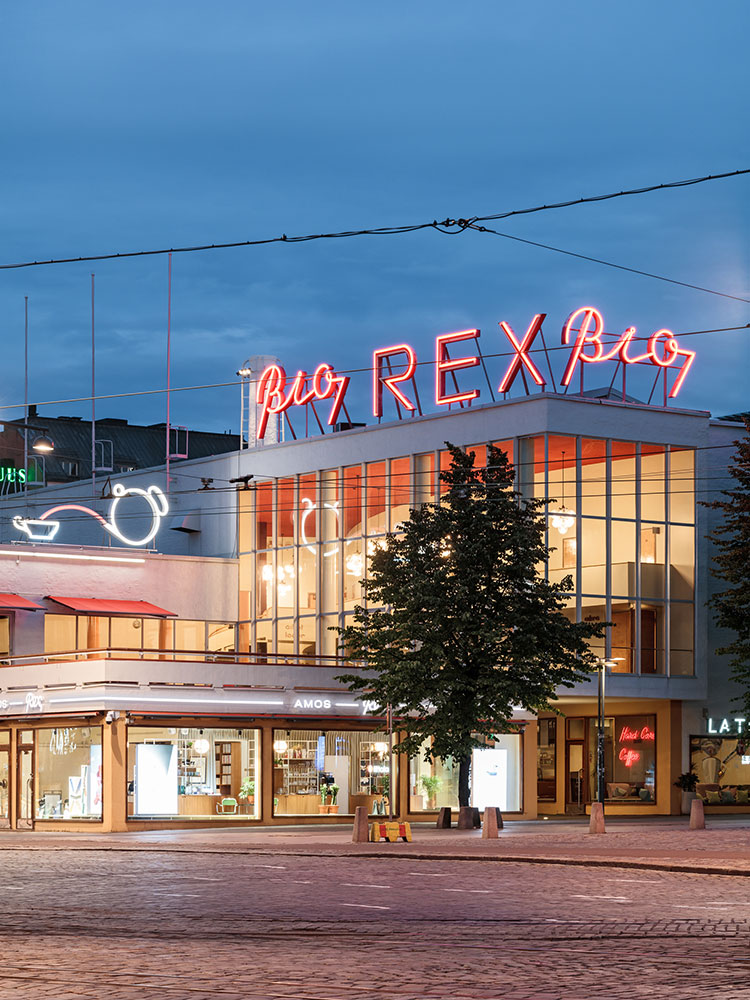 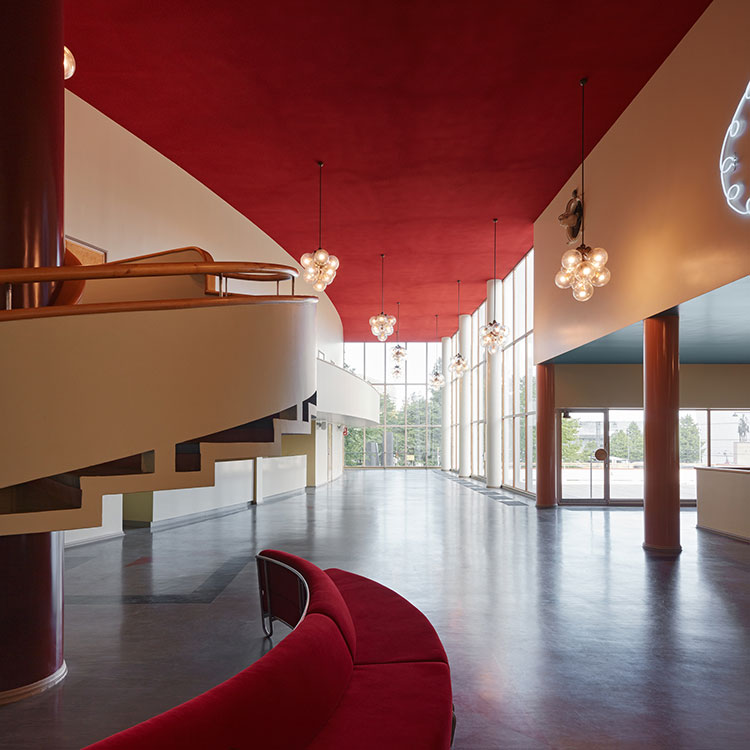 The opening exhibition teamLab: Massless features five digital artworks: four fully immersive spaces created using digital projection, including a new work making its debut at Amos Rex, and an LCD screen-based display. The exhibition will be one of the largest completed by the collective outside Japan and the first teamLab exhibition in the Nordic region.

Entry to Amos Rex will be free for everybody under the age of 18 and an art education workshop dedicated to children and youngsters will occupy space alongside the main gallery. Visitors between the ages of 18 and 30 will pay a special reduced entry fee of €5.