After having unveiled a mirror-clad refuge in the Swiss Alps last week, American artist Doug Aitken get back to the mother country to debut a new site-specific installation entitled Don’t Forget to Breathe. The piece meditates on the rapid changing face of technology framed within a relic of our modern past. The atmosphere of the desolate storefront presents a possibility that a chapter of capitalism has completed its life cycle and we are entering the next era where the screen world mirrors the physical one. This new era is increasingly de-material, where human connection is evaporating and quickly being replaced by digital life.

The open architecture of this empty retail store in Los Angeles surrounds the installation of the three isolated figures. The absence of commercial logos, goods and consumers renders the store haunting and minimal, a memorial to time past. The building is transformed into an architectural purgatory, in sharp contrast to a new era where communication moves at the speed of light and technology’s very presence is de-material.

Leaving the busy street and entering the store, the viewer approaches the glow of 3 Modern Figures (don’t forget to breathe). The three human figures rest on a raw wooden floor surrounded by the empty shell of a former store on Santa Monica Boulevard. The figures are seen rendered only in form, crystallized in translucent glass. These are not heroic figures, instead candid snapshots of modern individuals frozen as if time had stopped. In the empty core of the sculptures light emanates and pulses. They reach out to connect yet remain isolated as if freeze-framed and caught in the speed of change. 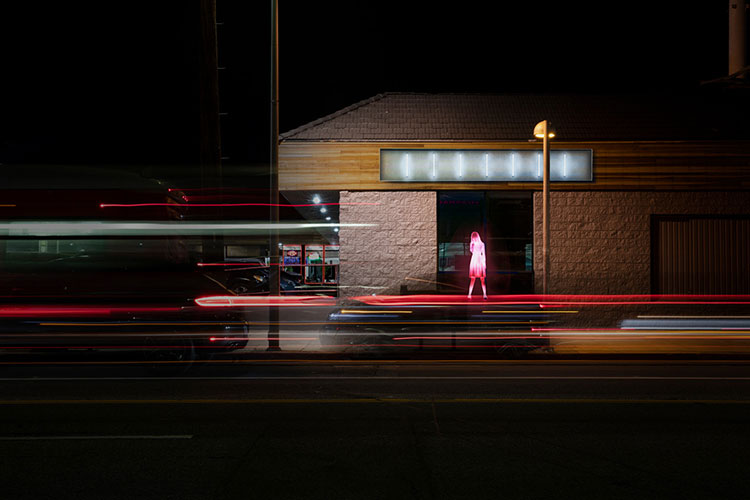 Light choreographs from person to person creating a rhythm that seems to both connect the figures and alienate each from the other. The figures are caught in the midst of making calls. Where a phone should be clutched in their hands there is instead a negative space. The light radiates creating a landscape of patterns and pulses of glowing colors.

The glow of the figures beckon the passerby to stop and pause at a familiar facade they have passed numerous times. Now an empty storefront, it echoes a familiar pattern of closure that reflects a larger retail apocalypse in the US as retailers shutter brick and mortar locations across the country. These spaces wait for new tenants or are soon to be transformed into high-rises. 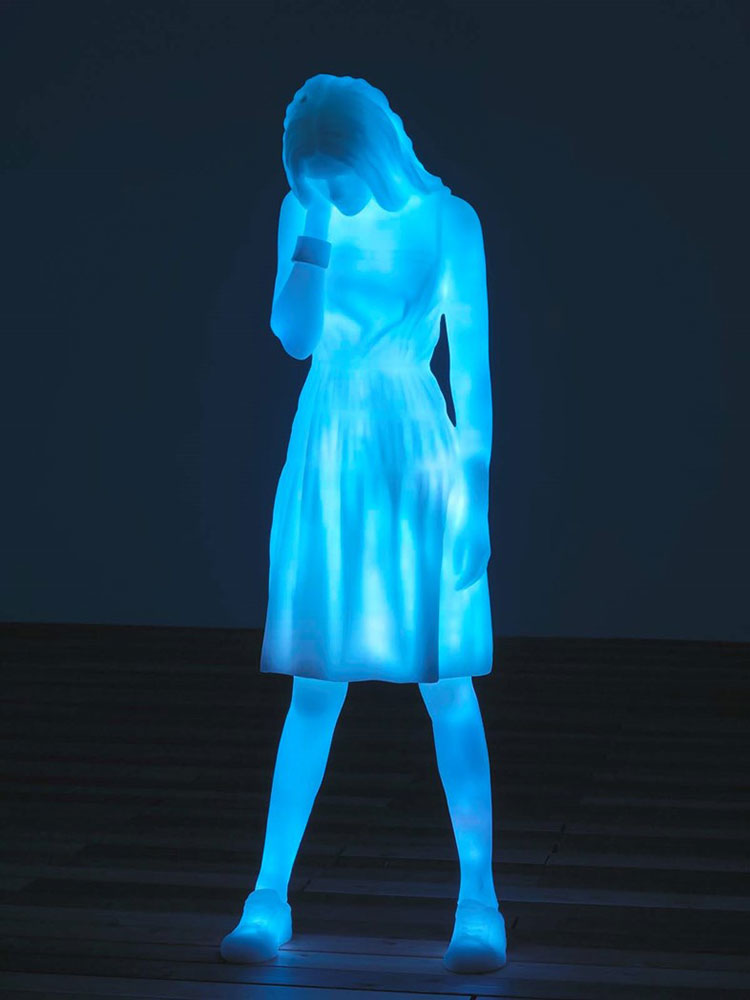 This artwork explores a landscape of transformation, the shift of the material to the dematerial. As light, color and abstract images synchronize through the bodies of the installation they create a continuously changing juxtaposition between isolation an absolute connectivity.

Echoing through the space is an original audio composition of layered vocals that moves in sync with the light choreography. The soundscape for the artwork is constructed entirely of human voices. Single words or short sentences are repeated into abstractions creating a soundscape that moves continuously without beginning or end.