German-based artists Elmgreen and Dragset have unveiled a 20-foot-tall sculpture outside the Miami Beach Convention Center during Miami Art Week 2019. Dubbed Bent Pool, the sculpture is shaped like an inverted “U” and stands upright on a two-tier plinth. The pool seems to have somehow been lifted out of the ground and stretched into a curved form. With a turquoise blue interior, one of Elmgreen & Dragset’s signature colors, and a matte white exterior, the work both stands out against the greenery of Pride Park and creates a synoptic connection to the park as a leisure area. 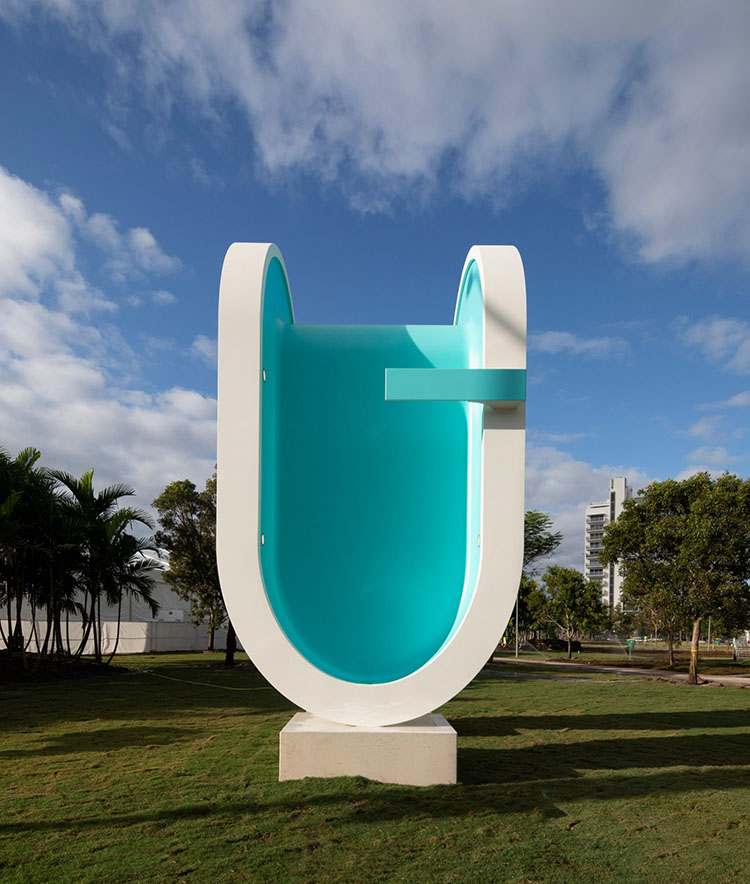 The work draws on the Minimalist reductive tradition and use of geometric forms, as much as it does on Pop-art and Conceptualism’s use of ready-made objects and imagery. Yet, on closer inspection one will discover that this is not an altered ready-made, but a carefully crafted object. Identified by details such as its ladder, its diving board and pool lamps, the abstracted object can easily be recognized as a swimming pool even though its bowed shape prevents it from carrying water. 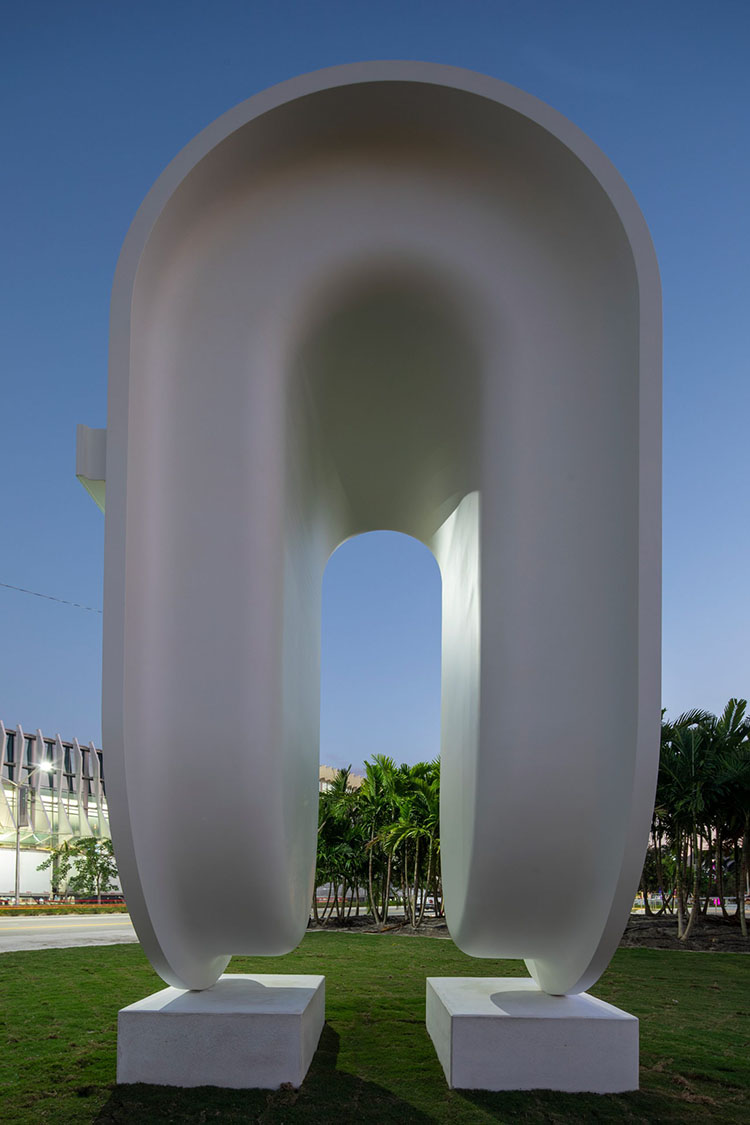 Due to Miami Beach’s climate and status as a beloved holiday destination, swimming pools are a natural part of the city’s fabric. The distorted shape of the Bent Pool, however, makes us more aware of how objects are perceived relative to different contexts. Miami Beach is an area that has seen a rise in extreme weather and flooding; its landscape is in flux. Bent Pool encourages us to think about how we normally interact with our surroundings: how accessible or inaccessible they appear. 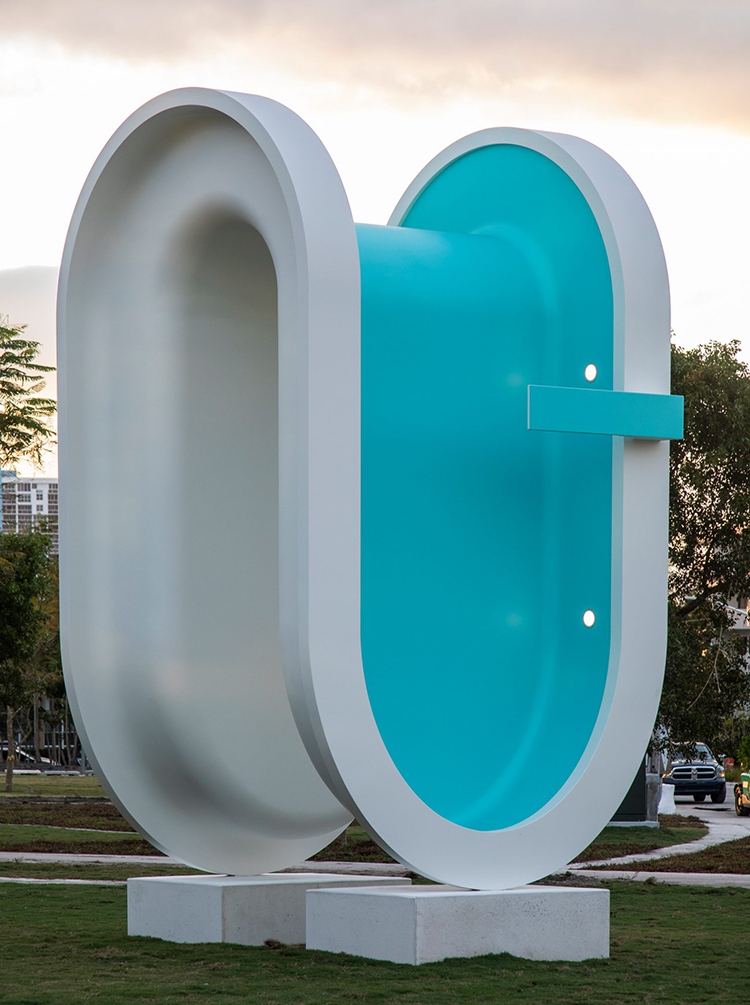 With Bent Pool, the artist duo also challenges the conventions of outdoor sculpture and monumentality. The sculpture is an arch—a form adopted in monuments of the distant and recent past to commemorate historical battles or mark the ceremonial entrance to a city (e.g., the Arc de Triomphe de l’Étoile, Paris, France; the Gateway Arch, St. Louis, Missouri, United States). 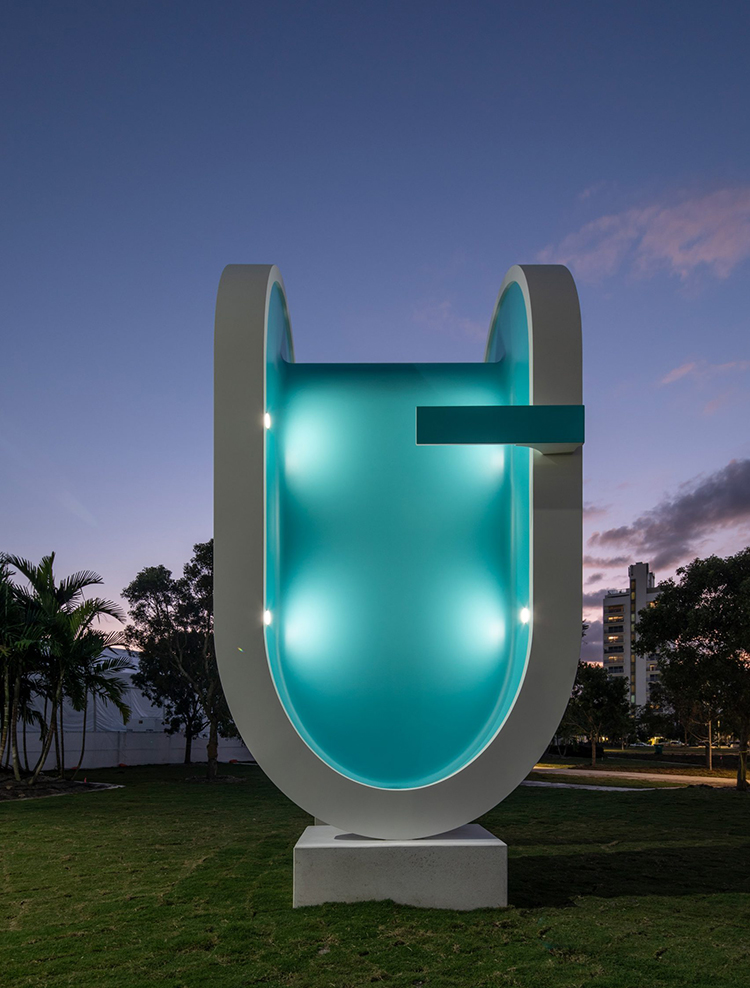 However, just wide enough for one individual to pass at a time, Bent Pool is not designed to accommodate the heavy traffic of Paris or masses of people marching through its narrow opening. Instead, Bent Pool seems to celebrate the less grandiose like ‘having a good time by the pool’, and reminds us, as we enter the convention center for an event such as Art Basel Miami Beach, that enjoyment can be found in so many experiences, beyond glamorous event culture; oftentimes in the everyday.