Artist Anne Hardy has taken inspiration from the rhythms of the earth and the tides of the River Thames to decorate the facade of London’s Tate Britain as part of the gallery’s annual winter commission.

Until January 26th, 2020, the building’s grand entrance is turned into a marooned temple, appearing with tattered banners and tangled lights, while sculptural objects cascade down the steps from the shuttered central door, surrounded by an atmospheric soundscape of rain, thunder, birds and insects. 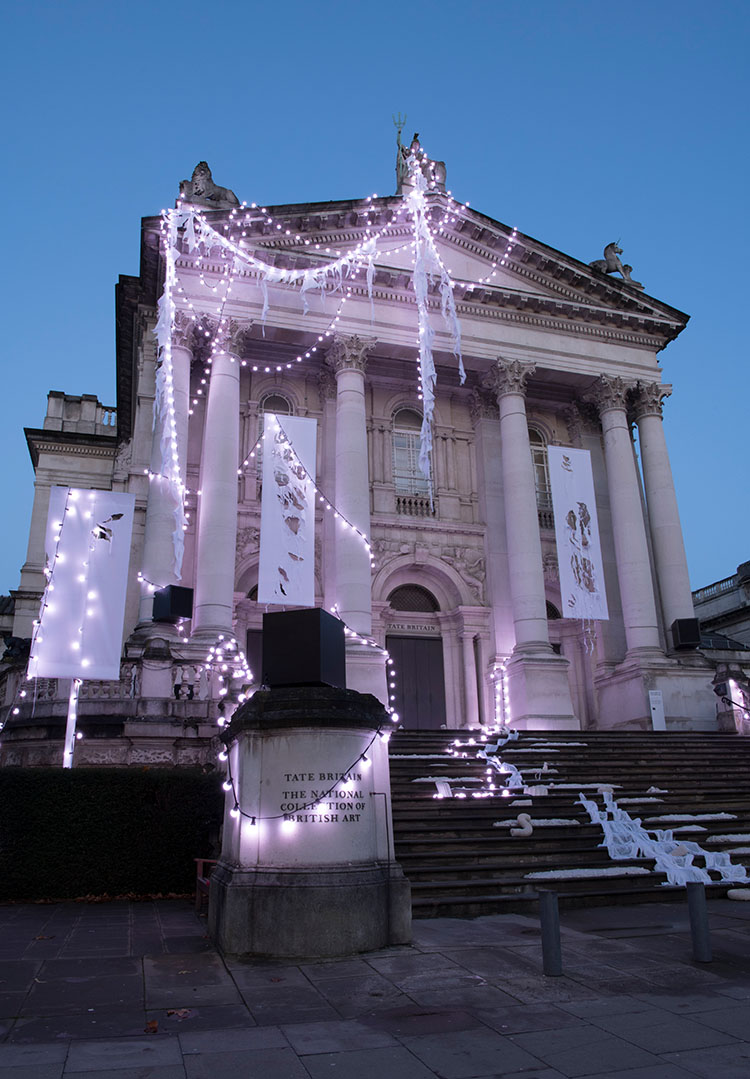 Anne Hardy is renowned for her large-scale sculptural installations or ‘field works’, which combine physical materials with light and sound to create immersive and sensual environments. Her commission for Tate Britain, entitled The Depth of Darkness, the Return of the Light, is her most ambitious project to date. The title is inspired by pagan descriptions of the winter solstice – the darkest moment of the year. It refers to seasonal cycles and longer-term ecological patterns, as well as alluding to contemporary social and political issues and the hope for positive change. 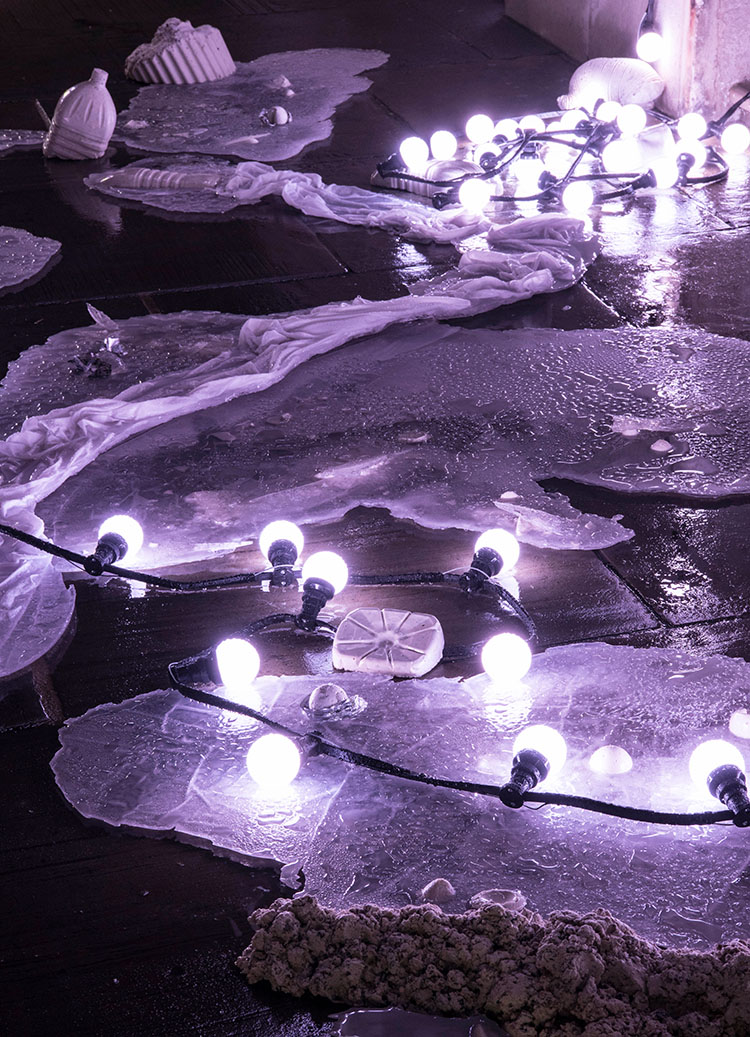 At the centre of the commission is a new 21-minute quadrophonic sound work, specially composed for Tate Britain. This soundscape incorporates field recording from under and on top of the Thames, in and outside of London, and takes the listener on a sonic journey from inland to ocean. The light and sound elements of the work are site-specific and have been choreographed in situ to give the impression that the building has become possessed. Manifesting these environmental changes through the material and aural changes to the site, the commission appears to transport visitors through time and place to a parallel prehistoric world or post-apocalyptic future. 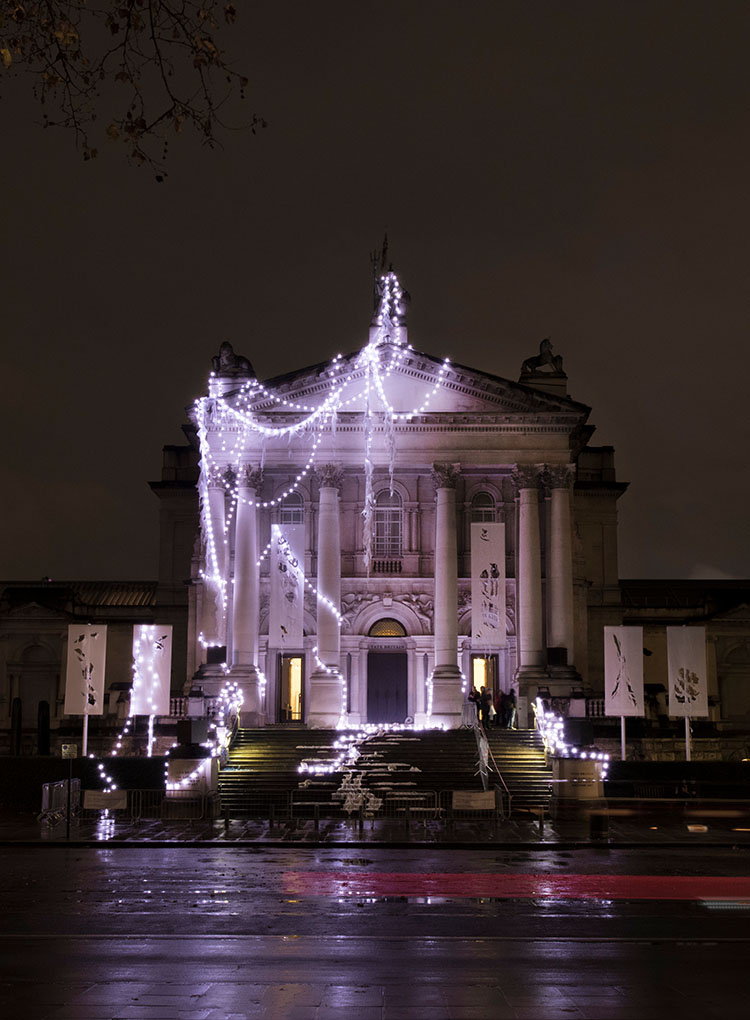 When researching Tate Britain’s site on the riverbank, Hardy discovered that it was once marshland, referred to in medieval times as ‘Thorney Island’, and that by 2100 it may again be submerged underwater by rising sea levels. Hardy also heard of archaeological evidence that hippos, jungle cats and mammoths once lived in central London. These relate to the artist’s interest in the Thames as a mysterious natural entity that has long been a site of ritualistic activity. 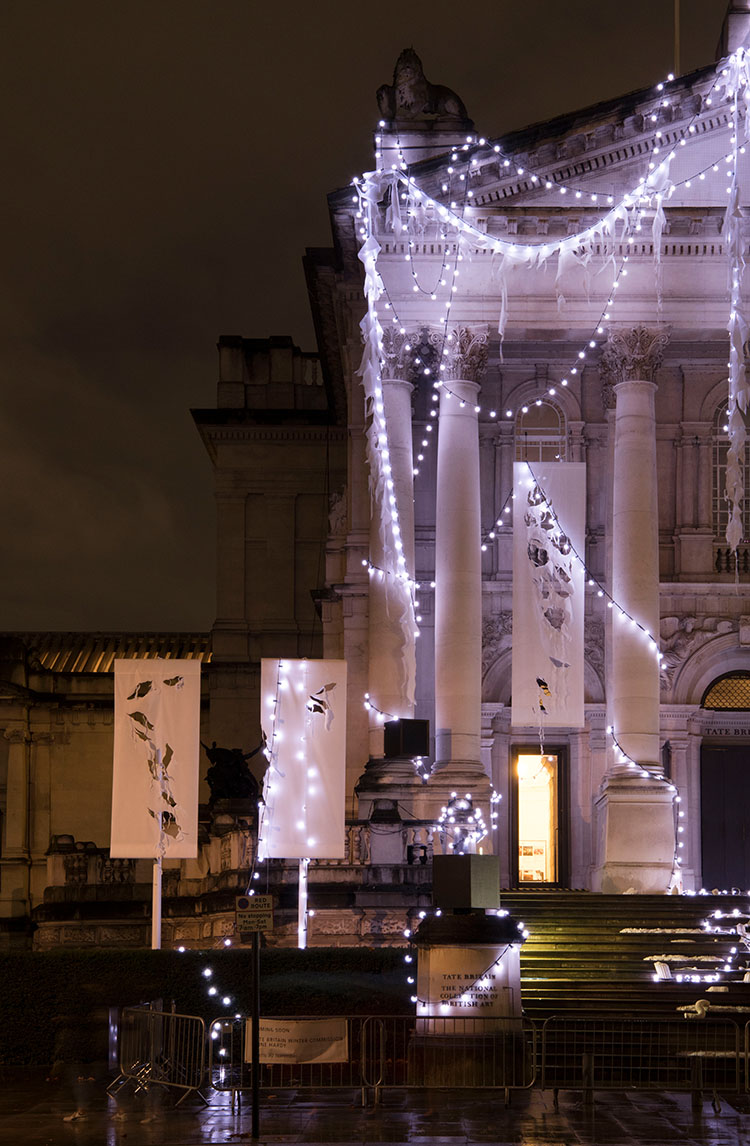 The effects of these pasts and futures are played out across the façade through a choreographed sequence of light, sound and sculpture. While the grand façade of Tate’s Millbank entrance was designed to convey power and longevity, Hardy treats it as a found object, and in imagining its destruction she highlights its fragility both as a man-made structure and a site of authority.

“I’m very excited to see another transformation of Tate Britain’s iconic façade,” says Alex Farquharson, Director of Tate Britain. “Anne Hardy has created something that is at once fantastically imaginative and urgently topical, reminding us not only of the changing seasons but also of the changing climate.”