Chicago-based Studio Gang has created an installation made from 2,700 wound paper tubes inside the National Building Museum in Washington D.C.. Called ‘Hive’, the installation invites visitors to explore their senses in a series of dome-shaped chambers, each scaled to reflect a unique sound signature. 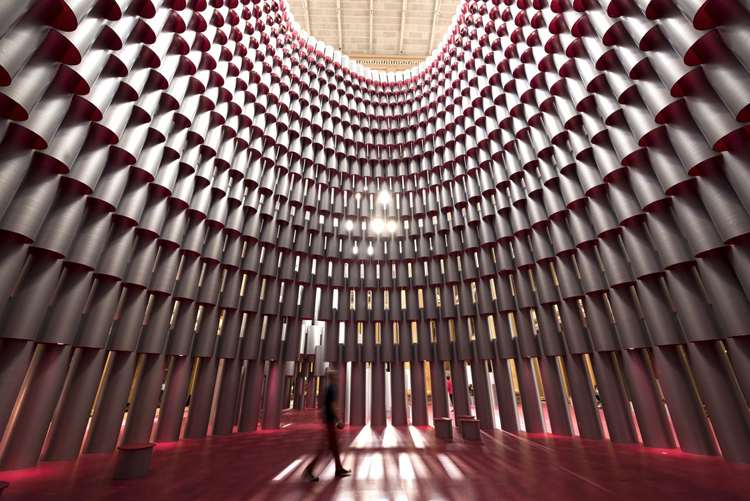 Utilizing structural paper tubes commonly used in construction as concrete formwork, Hive takes its form from the catenary physics that have inspired some of the world’s great structures such as the the Gateway Arch in St. Louis and Brunelleschi’s Dome at the Florence Cathedral in Italy, and vernacular buildings such as Musgum mud huts in Cameroon. 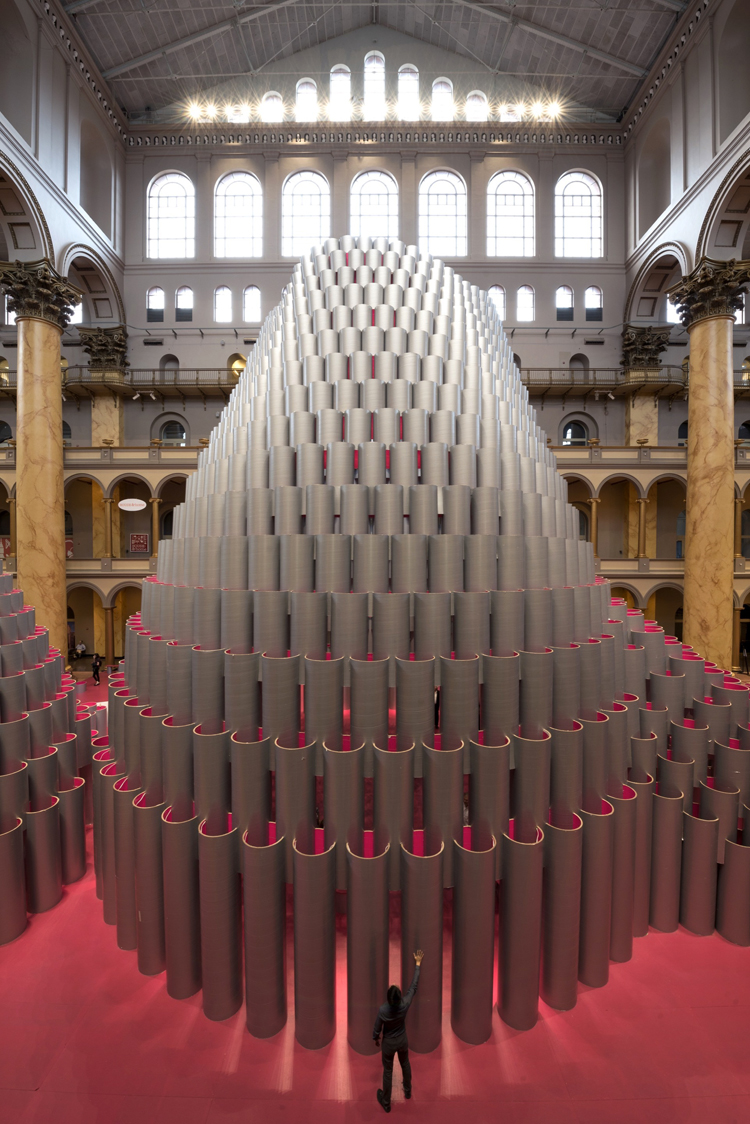 The installation plays with scale in surprising ways, its colossal exterior presence giving way to enveloping intimacy inside. Sited within the expansive space of the museum’s Great Hall, the mountain-like forms can be inhabited from the ground level or viewed from above from upper-floor balconies. An oculus located at the peak of the three domes draws the visitor’s eye up toward the soaring ceilings of Great Hall, while the spiraling pattern of the stacked tubes creates a perspective bending optical illusion. 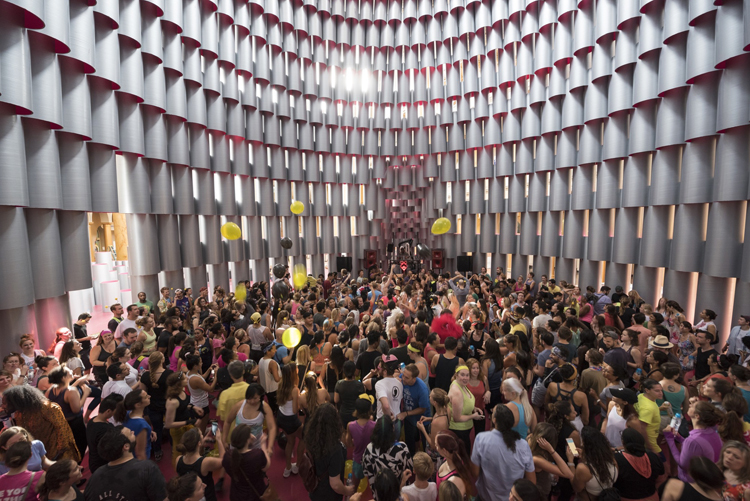 “Within the chambers, visitors are invited to explore how a structure can modify and reflect sound,” explain Studio Gang. “The whole structure acts acoustically like a clearing in a forest—some sounds are reflected back while others pass through the tubes, creating an intimate space within the large field of the Great Hall.” 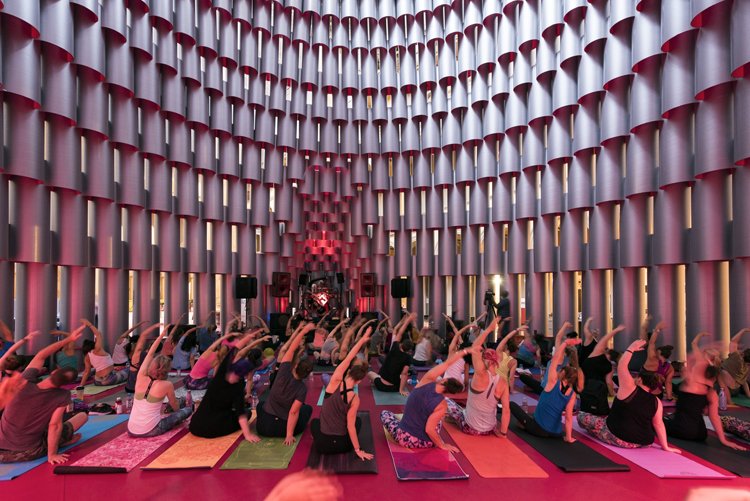 The sensory journey continues into the visual; the outer surface of each surface is painted in a reflective silver, while the interiors feature a pop of pink inspired by the January’s Women’s March, which was the largest non-violent protest in U.S. history.

The installation will play host to a number of formal and informal events throughout the summer, including yoga classes, concerts, lectures and cocktail parties. Check out the full list of events on the National Building Museum website, here.

Hive will be on display through through September 4. 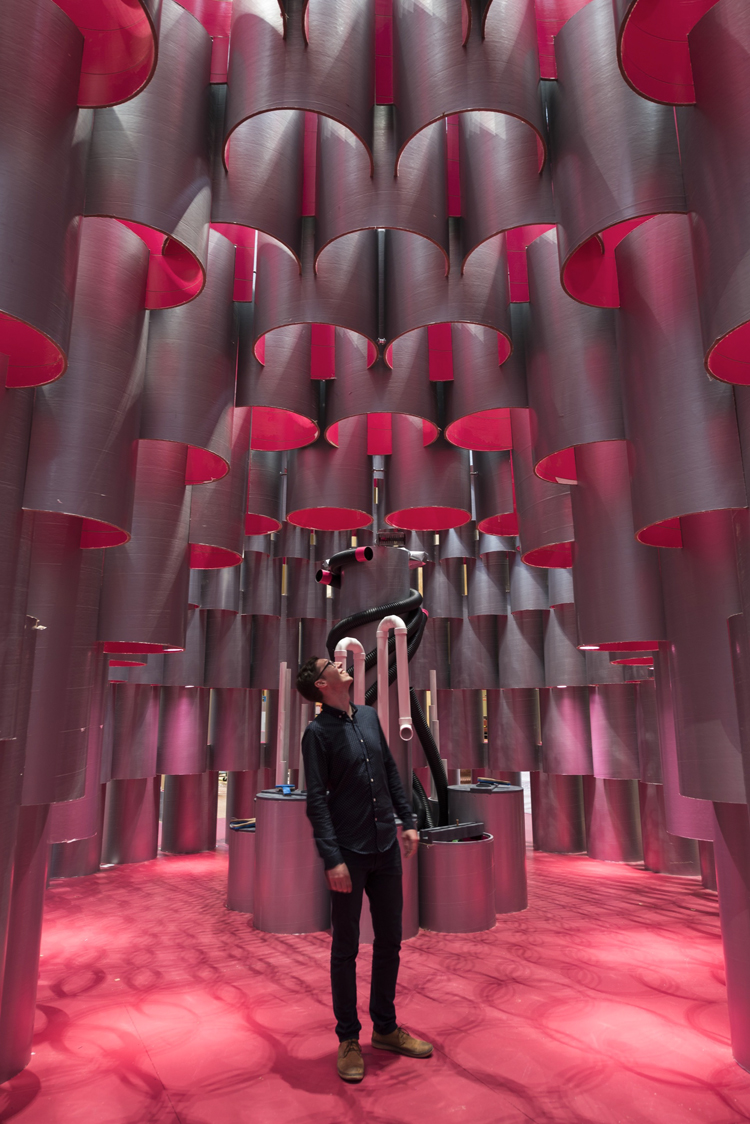