Located in Porta Venezia, one of Milan’s historical neighborhoods, Kanpai restaurant by local studio Vudafieri-Saverino Partners proposes the Izakaya rites and atmosphere – the equivalent of our hostelries, where sakè is informally drunk, accompanied by dishes from popular Japanese cuisine.

With this restaurant, Claudio Saverino and Tiziano Vudafieri face the theme of popular memories which animate the post-work Tokyo evenings, setting as an objective to re-stitch an aesthetic relationship – narrative but not artificial – with Milan’s urban ambience in which Kanpai transports a sensation of contemporary Japan, recalling in a non vernacular way some of the typical elements of the traditional Izakaya. In reality, Kanpai could inhabit one of the many lively side streets in one of the Japanese metropolitan cities, with installed screens which transmit pop images typical of today’s technological, urban Japan. 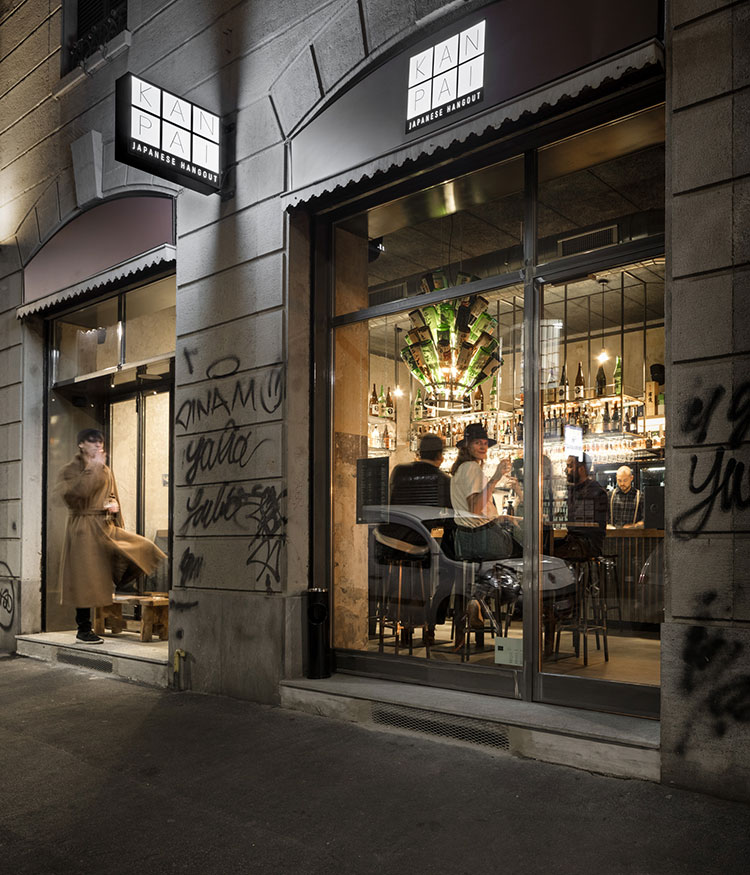 Also in this project, Vudafieri-Saverino Partners have treasured the pre-existing, tracing in the place’s markings and memories some of the elements around which to create the Kanpai atmosphere. 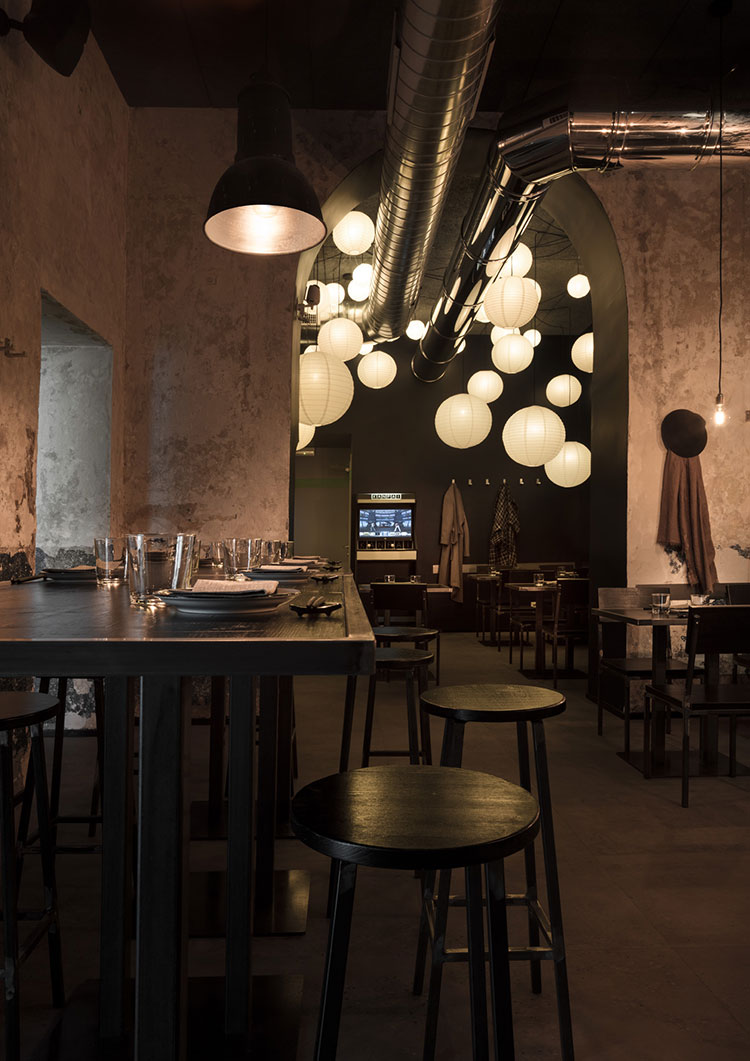 Kanpai’s 150 square meters are structured over three rooms, having diverse color schemes and aesthetic atmospheres to interpret the different styles of conviviality and comfort. The bar area welcomes customers with a large balcony built with radical simplicity: the metal elements fuse with bamboo wood in a natural, geometric way, with a wide selection of sakè and spirits on show, 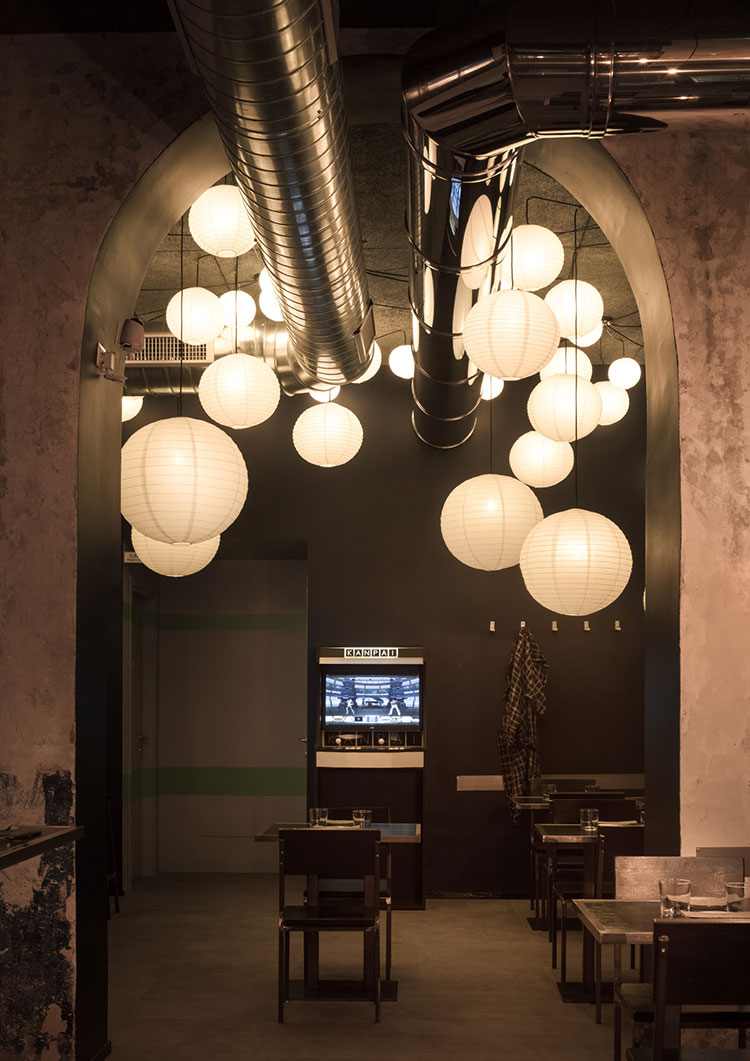 At the center, a peculiar lampshade stands out, made from an antique French bottle rack used by winemakers to wash out the wine bottles. A kind of zinc-plated corset, into which magnums of sakè have been inserted, which become diffusers of light filtered by the bottles and the labels’ ideograms; an installation which celebrates the best of Japanese sakè. 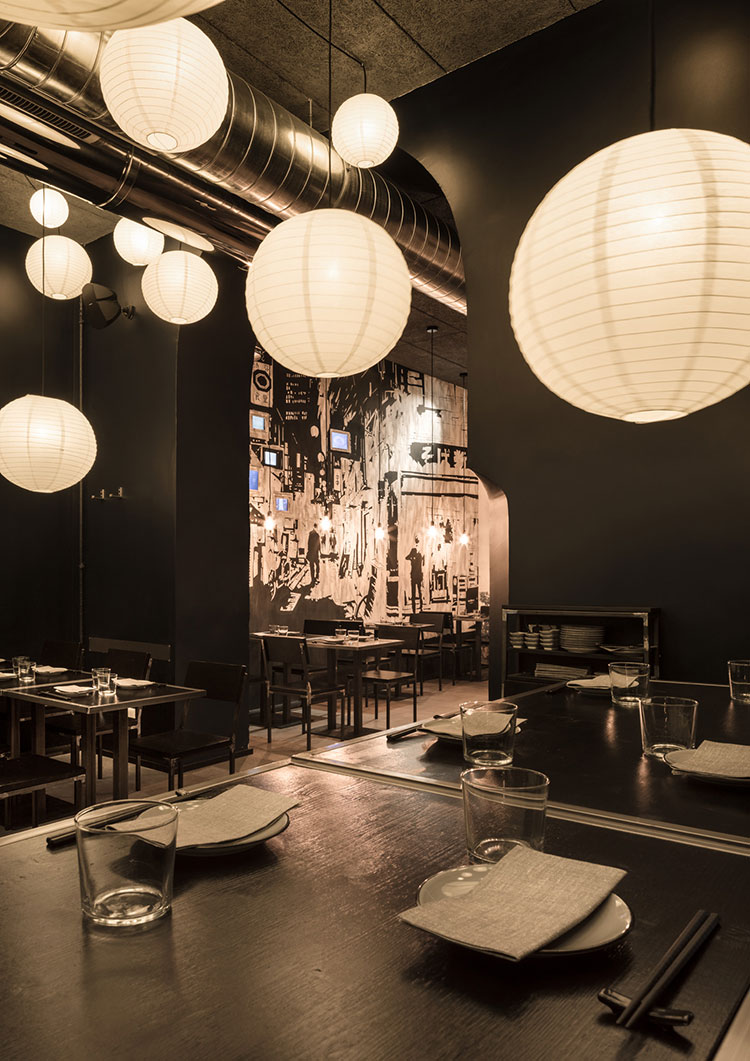 In the second room a large mural by the young street artist Alessandro Di Vicino, in art Gaudio, has been painted, even visible from outside through the windows. The work – its pictorial part entirely realized by brushed acrylic paint – stems from the idea to represent the imaginary Japan that we have, and is in its fundamental part in the presence of the screens in which videos flash by: that of recreating Tokyo’s typical neon light street atmosphere.

The Kanpai murals describe the sense of the contemporary through advertising clips, ghosts, programmes and sports events divided into three categories: EAT, DRINK and FUN. 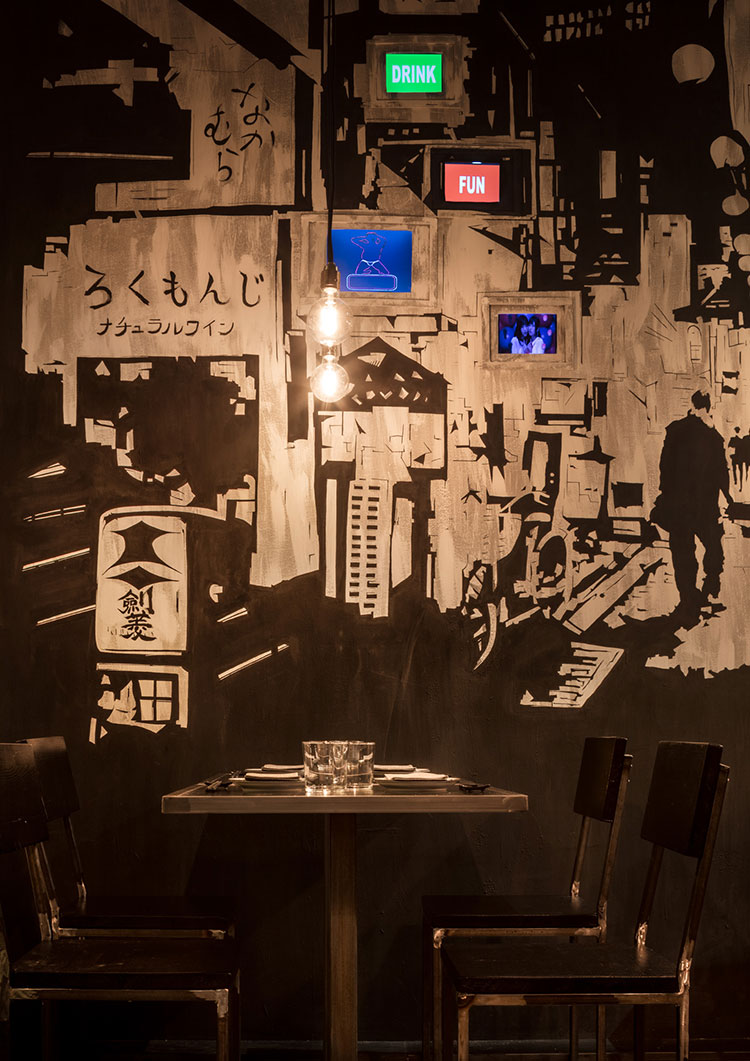 Lastly, the third room introduces blues shades, which render indefinite the perception of the depth and on which 50 Japanese lanterns have been left to float in shades of yellow and orange. A small cameo in the bathrooms, in which the atmosphere of the Yamanote Line has been reproduced, Tokyo’s famous circular Metropolitan line. Grey walls and double green stripes, photos which portray passengers squashed up against the windows, and the original stop announcer’s voice form a perfect Tokyo ambiance. 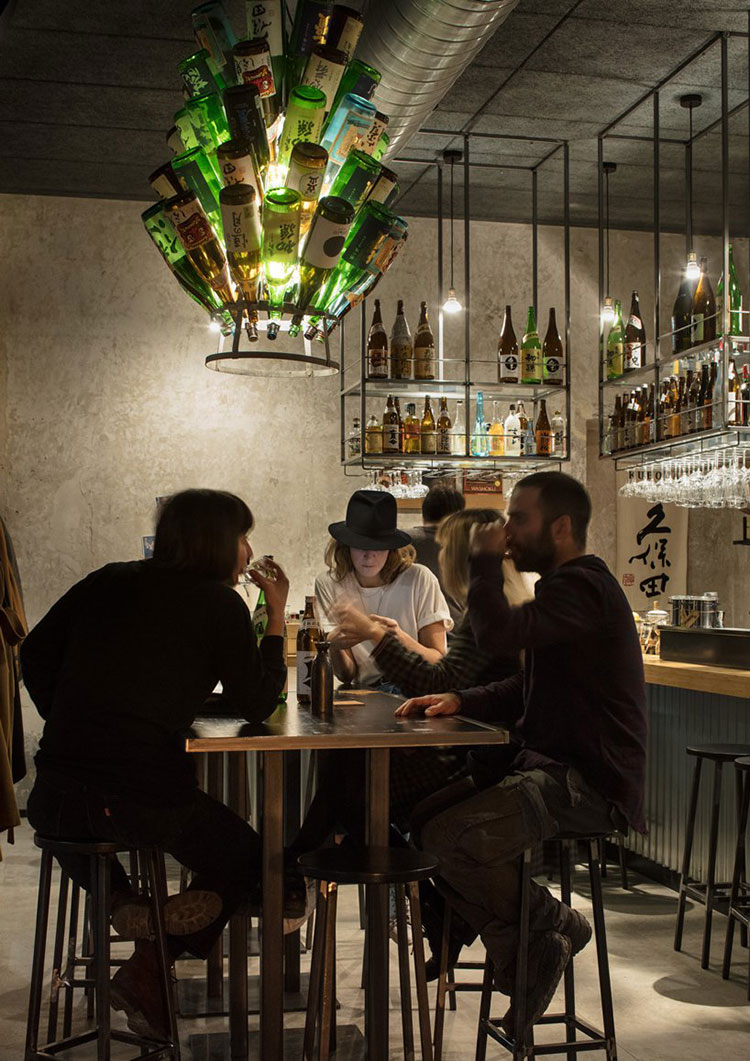