Pop artist Andy Warhol once said, “In the future, everyone has a chance at 15 minutes of fame”. In this age of Internet celebrities, people eat not just to satisfy their appetite, but they also use the food and the environment to show off themselves. Located in Nanshan District of Shenzhen, Doko Bar is an internet celebrity dessert shop. 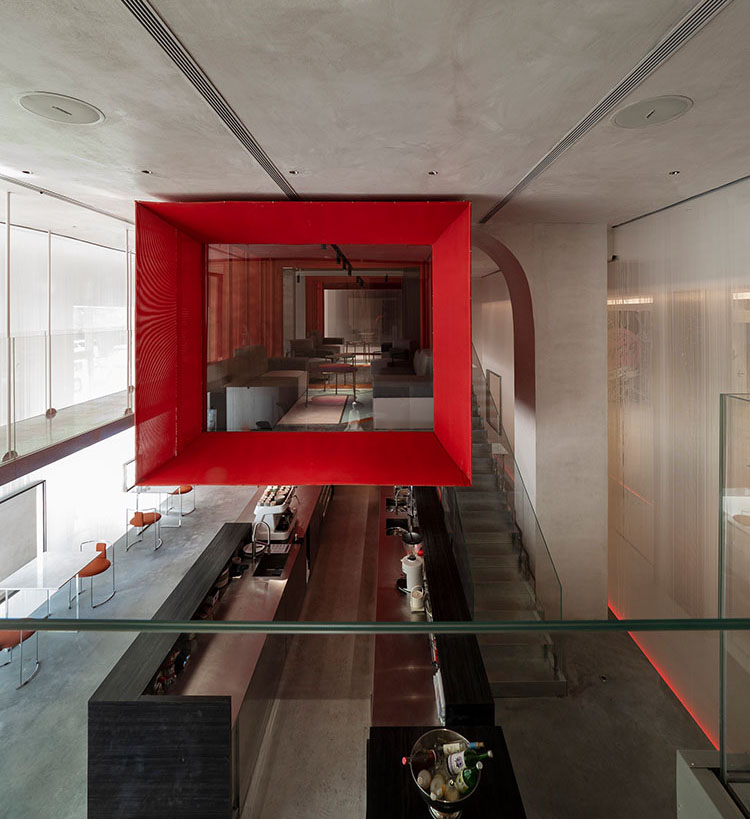 Inspired by the 15-minute theory, Taiwan-based studio Waterfrom Design has conceived the interior by considering the eating process a show. With social media and celebrity culture in mind, the place aims to become a 360-degree ‘theater experience’ of observing and being observed. From the open, transparent spaces, to the bright colors and perfectly ‘instagrammable’ plates of food, every step of the process is designed to see and be seen. 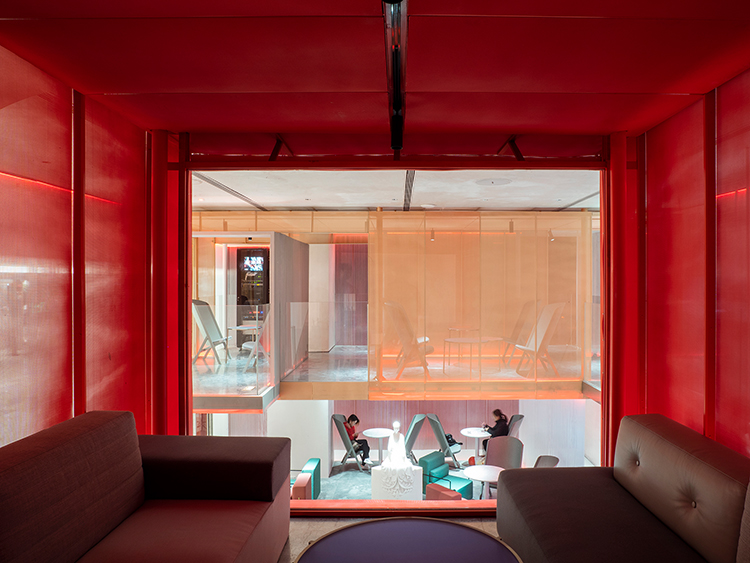 The first floor revolves around the chef bar, forming a couple of concentric circles and a multi-facing theater stage. Going into the stairs to the second floor and the hallways with transparent windows, the stage has been expanded into a 3D structure. These hallways are just like runways in fashion shows. Streams of guests taking their seats have become movements in the show. Everything inside enriches the show. 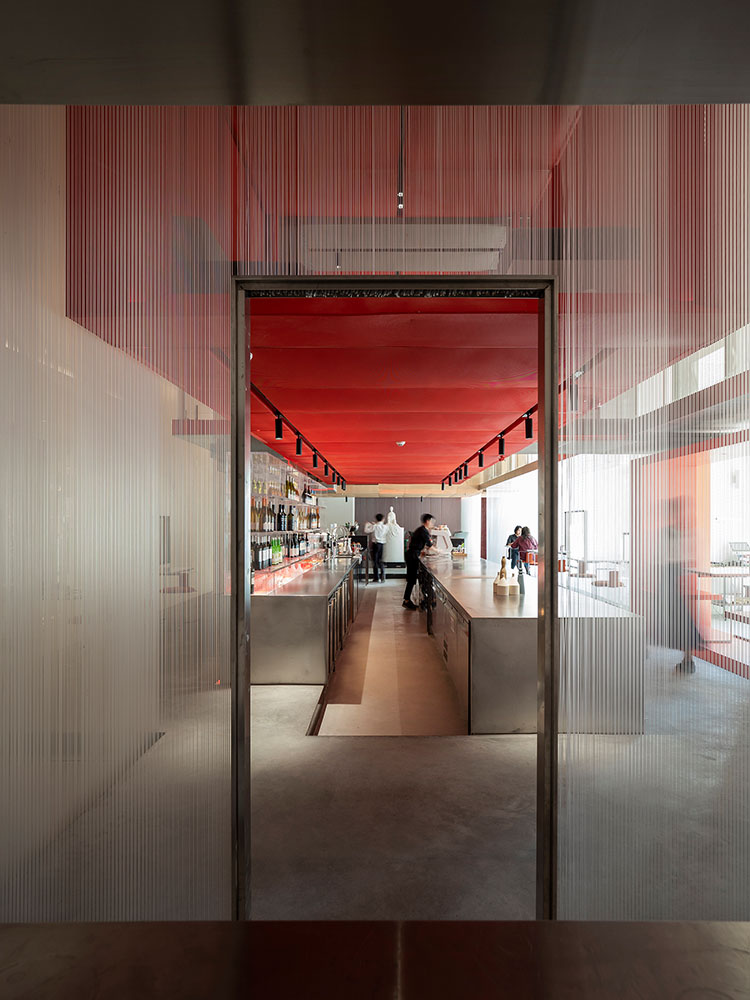 In the midst of layers of hallways and frames, the giant bloody red box seemingly floating in midair is most conspicuous. Distinct from other semi-transparent media, this highly real VIP room fixed on the visual axis is like a theater stage also like a secluded box on the second-floor balcony of a classical opera theater. High above the ground, regal, and mysterious, it is indeed a place for the observer and the observed, echoing the familiar list of dynamic advertisements in the Internet celebrities. 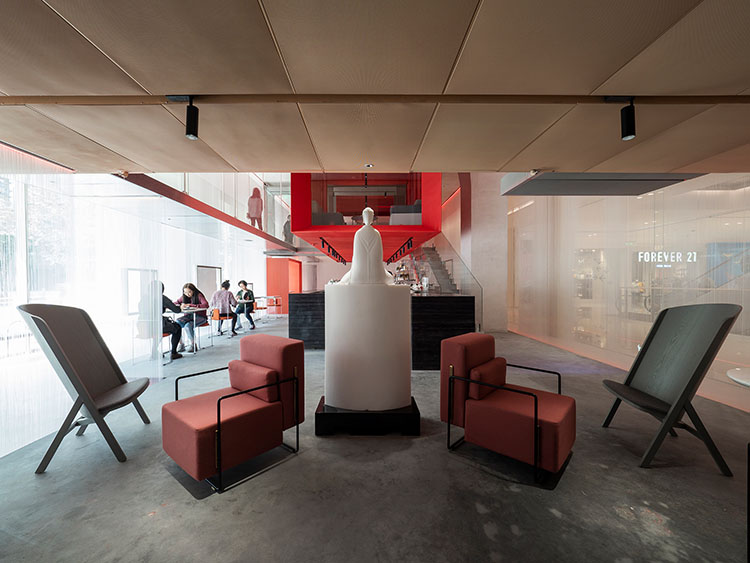 The surface layer of the interior architecture here is like theater curtains. Waterfrom Design chosen glass, metal mesh, galvanized sheet metal, nylon threads, and stainless steel to build a transparent and semi-transparent, hazy and solid contrast in the materials. Of those, nylon is the most expressive in showing hazily mysterious curtains. 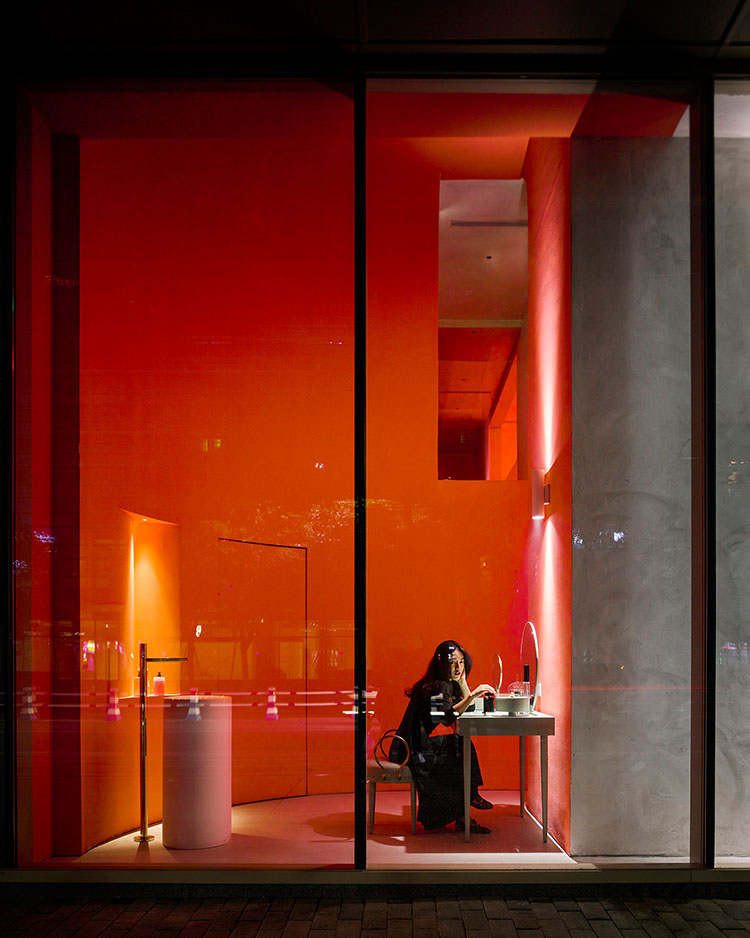 After trying materials of various flexibility, such as fishing lines and transparent PVC tubes, the design team uses nylon threads to construct walls of lines that are varied in density. This not only upends people’s impression of thick and heavy walls but also changes the density of tree shadows as well as the images and shadows of trees and people as the angel and distance of viewing change. 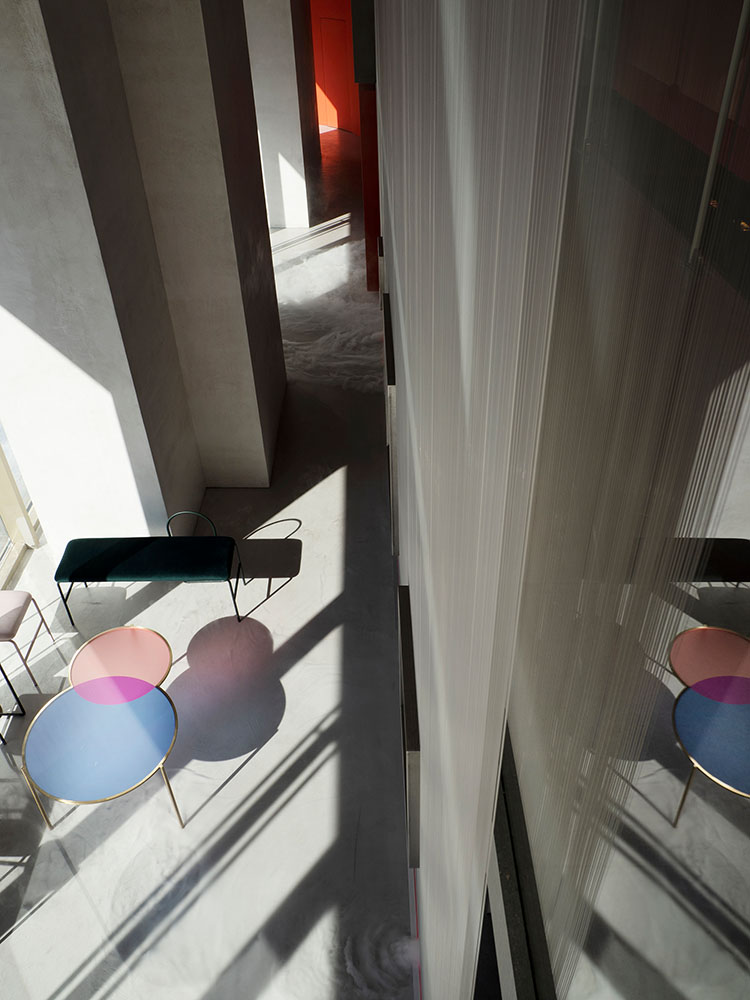 Light, drifty, and dreamy vapor abounds in the entrance hallway. Around 10,000 nylon threads were put together to make a semi-transparent shield. These two things together, sometimes fixed in place and sometimes drifty, seem to symbolize the complexity of interpersonal webs of relationships and correspond to the shape of relationships between oneself and all others in media in the digital age: relationships that are both transparent and hazy, both near and far, both building connections and a wall all at once, and both contradictions and mutually fortifying. All this, again and again, shows the contemporary social media relationships that are both real and virtual, hard to draw a line of definition, both still and moving, and at all times forming a unique picture.