British designer Paul Smith has collaborated with Land Rover to create a bespoke Defender, which was revealed at the designer’s shop at No. 9 Albemarle Street in Mayfair. Paul Smith worked closely with Land Rover’s Special Vehicle Operations (SVO) design team – who is on hand to fulfil individual customer commissions and personalisation – to create a unique vehicle, built entirely to his own specification. With guidance from Land Rover’s Design Director and Chief Creative Officer, Gerry McGovern, he was able to realise his uniquely personal version of this global automotive icon. 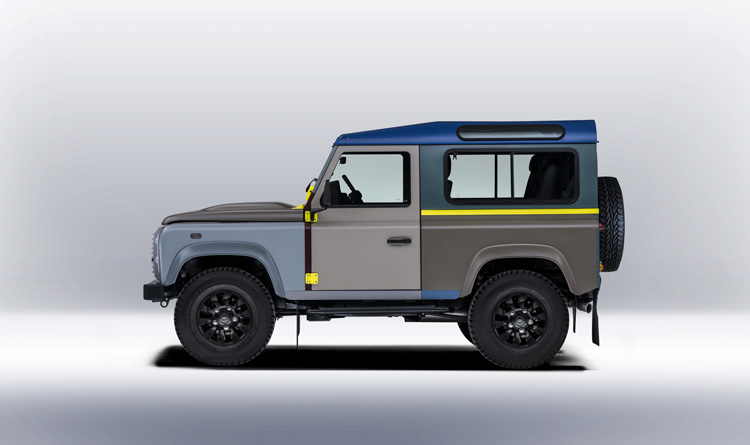 There are 27 different colours used on the exterior panels, all of which were chosen by Sir Paul Smith. Taking inspiration from the British countryside, as well as colours historically seen on Defenders used by the Armed Forces, he says, “I wanted deep rich colours, but at the same time, I wanted them to work together yet be surprising.” In order to achieve the look he wanted, Paul gave the SVO team a set of Pantone colour references, which were then mixed specially for this vehicle. 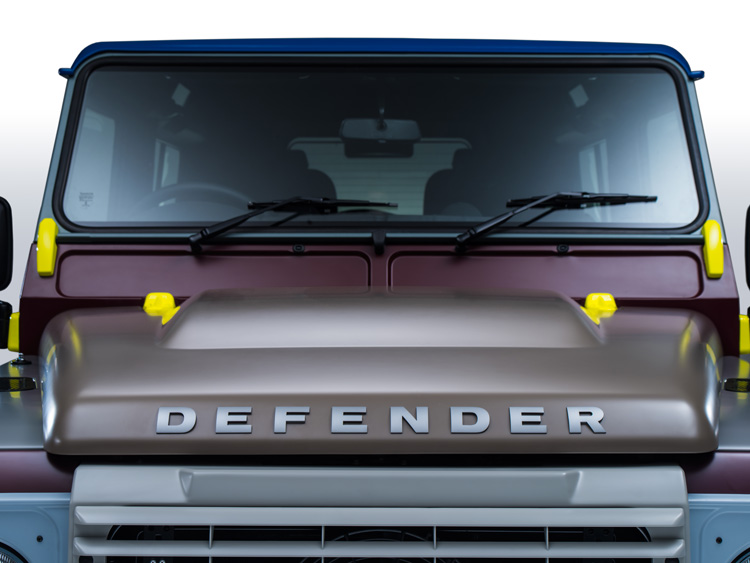 Further adding to the vehicle’s bespoke design, Paul worked with Land Rover to ensure that the interior stayed true to his vision. “This is a complete one-off; I wanted to give this Defender a feeling of luxury, so I used a mix of leather and fabric for the seats. I actually used the fabric that I design for Maharam, the American upholstery company”. The vehicle features lots of special Paul Smith touches. 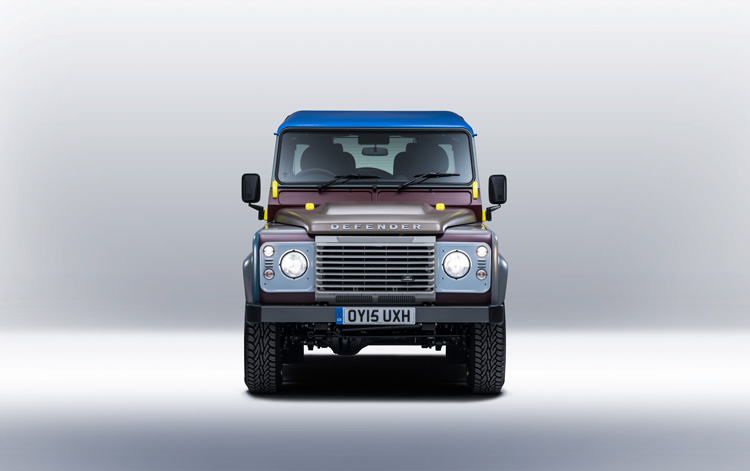 Inside, black leather contrasts against blue stitching and there are lots of little hidden details throughout. For example, there is an image of a set of keys printed inside the glove compartment. Then there is a hand-painted bee on the roof, which is another little tongue-in-cheek reference to the countryside and the heritage of the car. Also, the traditional Defender clock has been replaced with a Paul Smith fascia. “My designs are known for their attention to detail, so I didn’t want this Defender to be any different.” 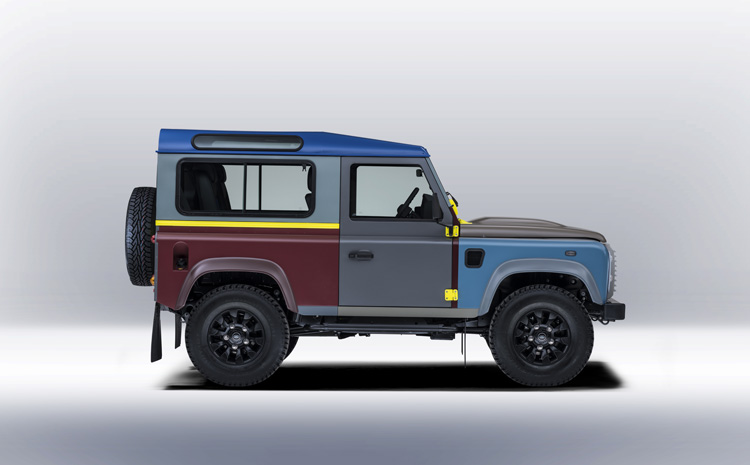 While Paul has added many playful and personal touches, the Defender retains traditional elements, such as the wing mirrors, door handles and wheels – something that was of paramount importance to the designer. These were then given a satin finish, to create a contemporary feel. 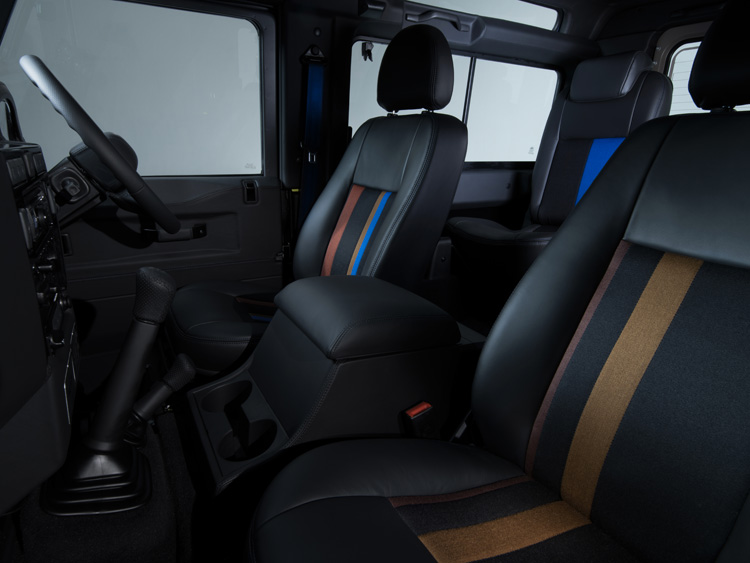 Along with the special Paul Smith Defender, Land Rover has announced three limited edition Defenders for 2015: the Autobiography, Heritage and Adventure models. Each special vehicle commemorates a unique element of the Defender’s versatile character and reflects its strength and breadth of capability. 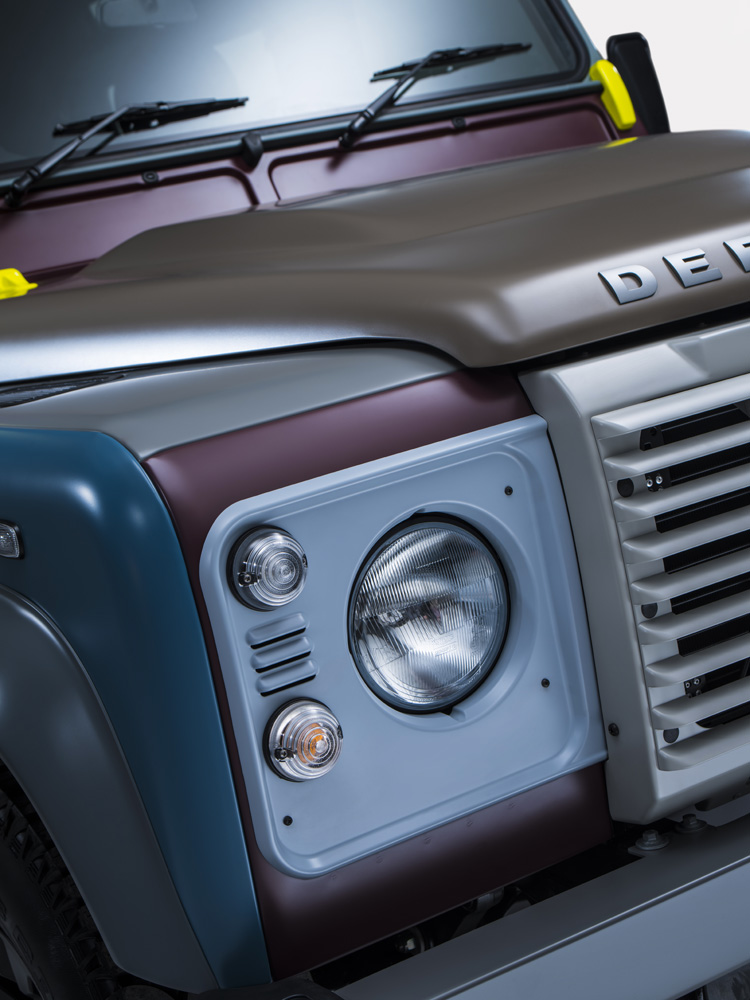 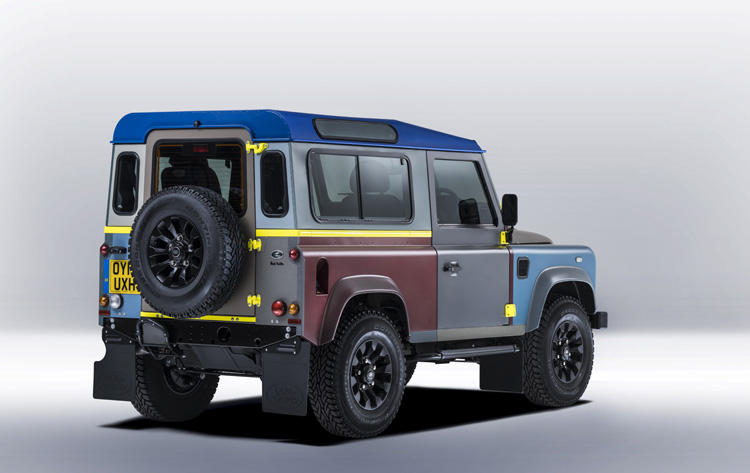 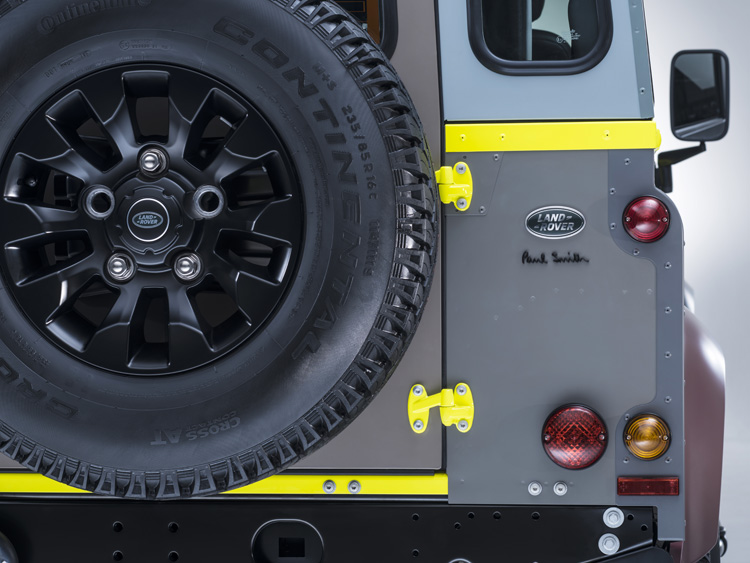 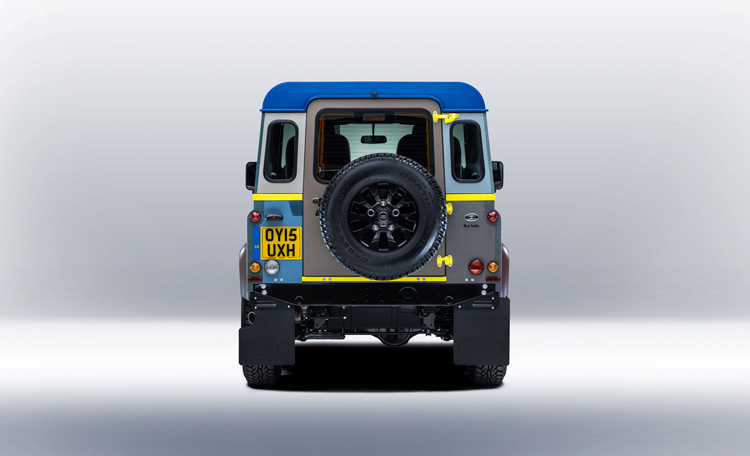 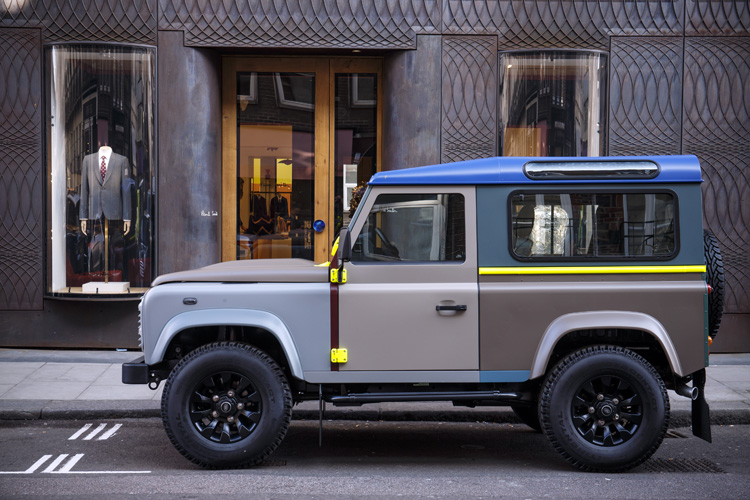 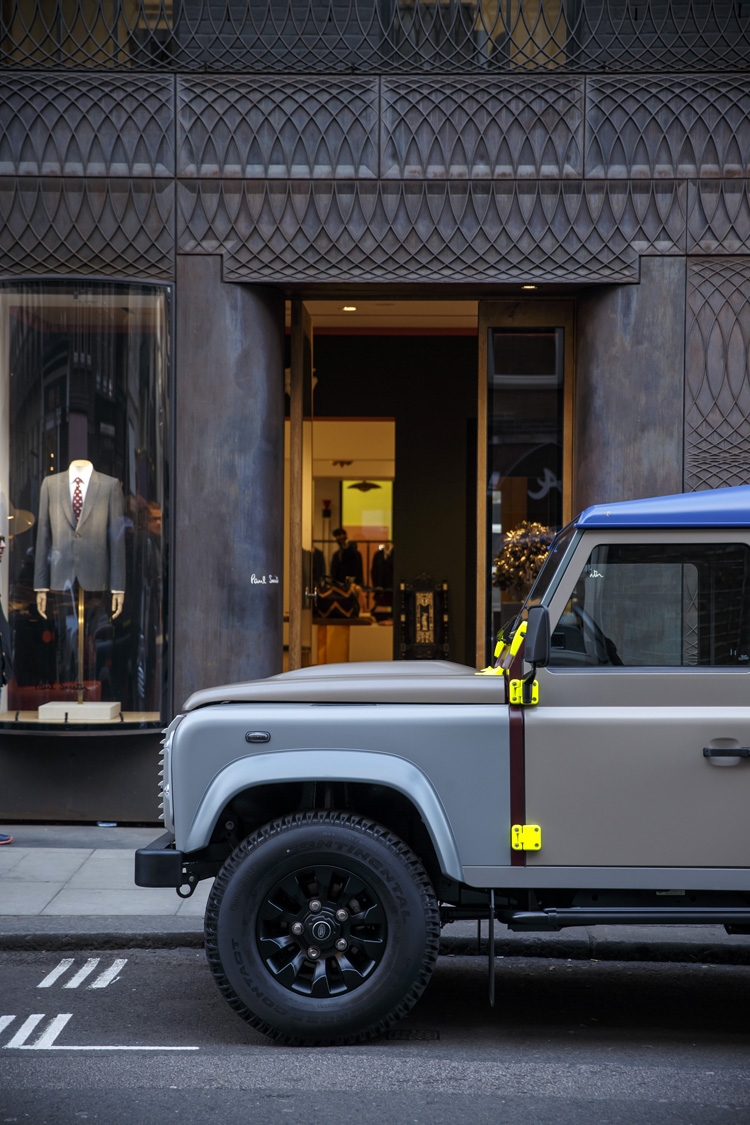 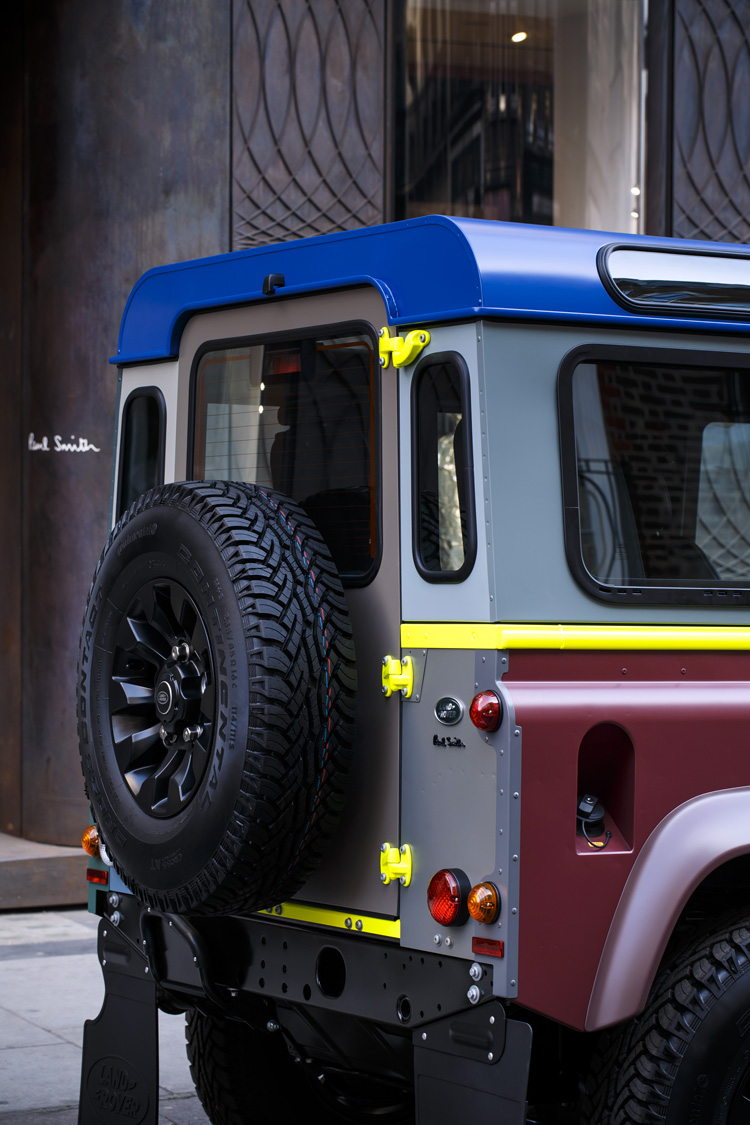 all images courtesy of LAND ROVER