German automaker Volkswagen continues its journey towards an electrified future with the unveiling of the ID Buzz concept van at the 2017 North American International Auto Show in Detroit. The “ID BUZZ” name was hardly an arbitrary choice. I.D. stands for “Identity,” “Idea,” “Individual,” “Intelligent” and “Iconic Design”. BUZZ, on the other hand, is a phonetic word play on “bus” and refers to the silent “buzzing” of the drive system.

The zero-emissions all-wheel drive system has a total output of 369 horsepower and an electric driving range of 270 miles. The ID BUZZ shown in Detroit can accelerate from 0 to 60 mph in about 5 seconds, with a governed top speed of 99 mph. 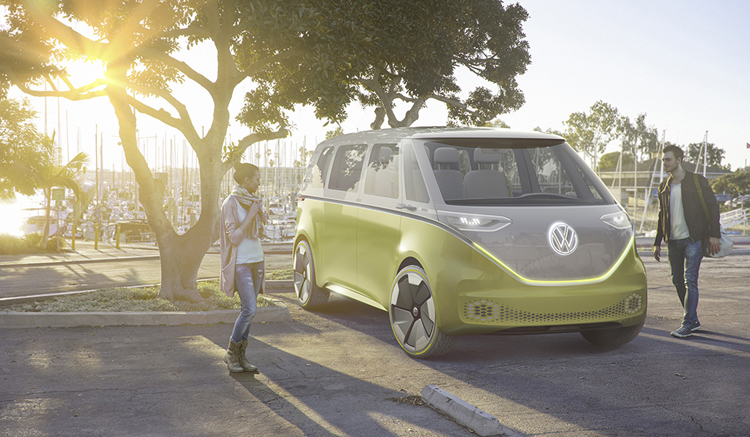 The ID BUZZ is the world’s first fully autonomous multi-purpose vehicle. A slight push on the steering wheel makes it retract and merge into the instrument panel, switching the ID BUZZ from manual control to the fully autonomous “I.D. Pilot” mode that could make it into production by 2025. In this mode, the wheel is decoupled from the steering gear via a newly developed steering column system. The ambient lighting then switches from white light (“Drive”) to mood lighting that is warm and relaxed. At the same time, the distribution of ambient lighting is extended to the rear seating area. Simultaneously, the status of the ID BUZZ can be seen at all times on the tablet and the augmented reality head-up display.

Now driving on its own, the zero-emissions concept has already activated its onboard laser scanners. Four of them extend from the roof in “I.D. Pilot” mode. The cleanly styled roof sensors call attention to the fully autonomous mode by indirect lighting. 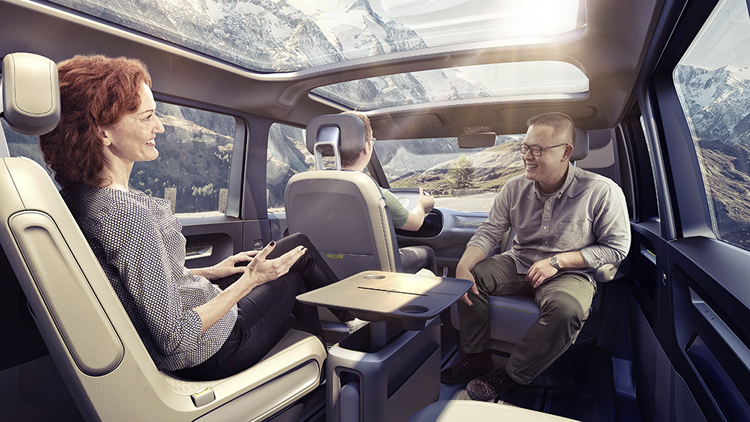 The ID BUZZ is not only able to detect other road users with its laser sensors, but also with the assistance of ultrasonic sensors, radar sensors, side area view cameras and a front camera. Traffic data is also continually acquired and compared with the vehicle data via the cloud. Fully autonomous mode is deactivated by touching the steering wheel or by pressing the brake or accelerator pedal. 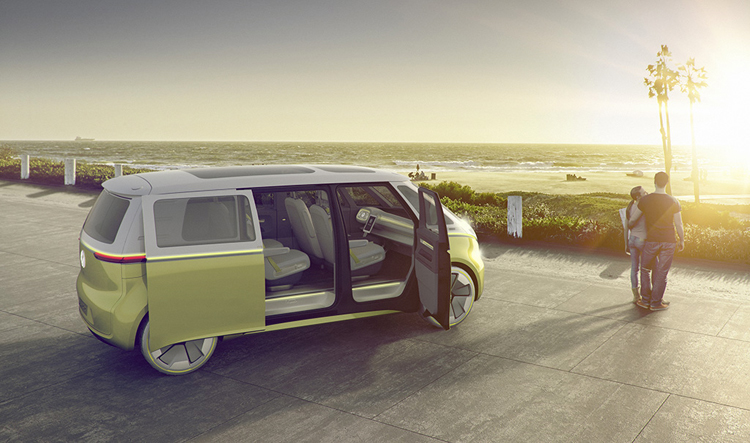 ID knows who will be at the wheel, thanks to the Volkswagen User-ID. This is an individual profile that stores the personal seat and air conditioning settings, favorite radio stations and songs, sound system settings, exterior sound, configuration of the navigation system, type of ambient lighting and contact information for the driver’s friends and business associates. This profile can be retrieved securely via the cloud.

Consequently, the ID BUZZ also recognizes which person is entering the car or wants to take the steering wheel at any given time via the authorized user’s smartphone-the Digital Key. As soon as a person approaches the vehicle, the sensor surfaces for opening the door light up. If the person’s hand is very close to the surface, that individual door is opened. Using the Volkswagen User-ID and a relevant smartphone app, passengers in the vehicle can also control infotainment functions and input intermediate destinations into the navigation system. The route is shown on a tablet. 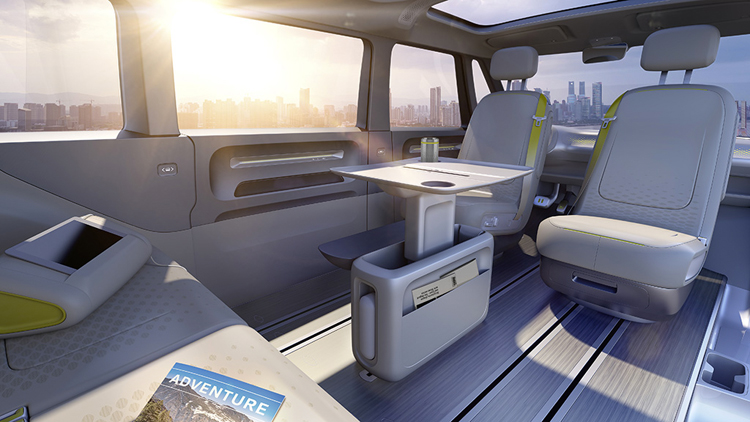 The original Microbus is a legend all over the world and forms a global community. Although the ID BUZZ is designed for a new era, it would fit in perfectly with its predecessors.

The best example of the interplay of familiar and new elements is the front end with its characteristic “V” and likeable “face”-it’s clearly a Microbus, but a completely new interpretation. Extremely short body overhangs also define the vehicle. This applies equally to the roofline with its charismatic front overhang and three stylized air vents in the rear roof pillars, a small tribute to the T1. Each detail has, however, been re-interpreted and implemented in a new context. 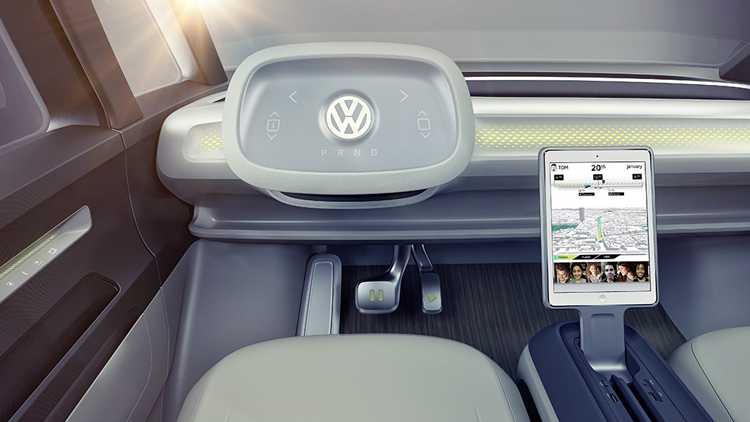 Inside, in place of traditional instruments or controls is an intuitively operated cockpit consisting of a Touch-sensitive steering wheel, an augmented reality head-up display and a “I.D. Box” center console, including a tablet usable outside the vehicle.

The seating system is flexibly designed to be like the living space at home or a lounge area. This versatility is based on a seat rail system that is integrated in the flat floor and on adjustable and folding seats. The seatbacks of the individual second row seats can be folded to form tables. At stops, the third row can be made into a bed, enabling the ID BUZZ to be used for overnight voyages. 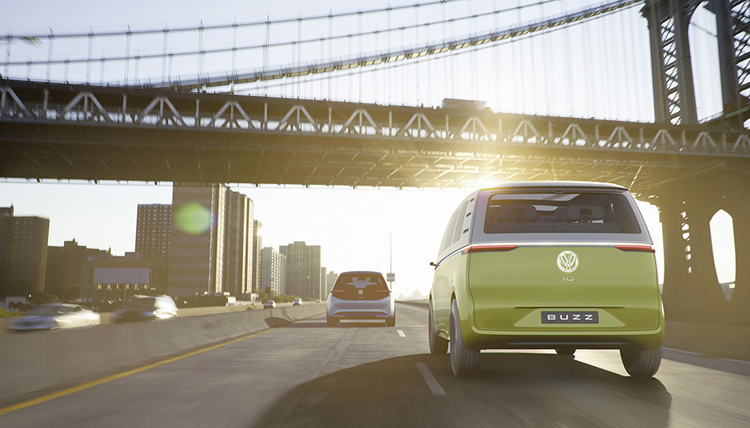 There are no rearview mirrors in the ID BUZZ. Cameras and a display have taken over that function. Where there would normally be a rearview mirror, there is a screen called the e-Mirror. Here, a monitor combines data from the exterior mirror cameras on the left and right of the vehicle and from a camera that faces directly rearward. Doing away with the side mirrors improves the aerodynamics of the vehicle.

all images courtesy of Volkswagen