Unveiled just few day before its world debut at the 2017 Frankfurt Motor Show, the BMW Concept X7 iPerformance defines a new understanding of luxury for sports activity vehicles (SAV). This study car offers a look ahead to the future production model set to make its debut in 2018.

The status of the BMW Concept X7 iPerformance as a luxury-class BMW SAV is instantly apparent. The spectacular exterior, imposing dimensions and skilfully judged proportions endow it with an extraordinary sense of presence and an ultra-modern aesthetic fused with innate dynamism. 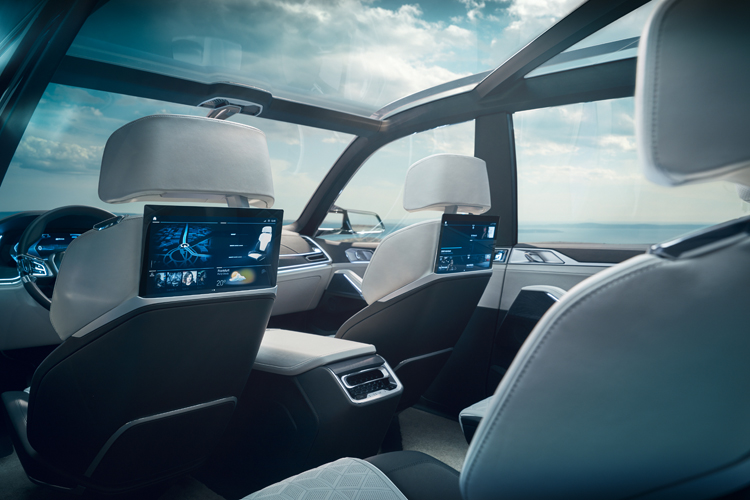 The luxurious character of the BMW Concept X7 iPerformance is brought alive by its cabin, in particular. The vehicle’s sheer size forms the basis for an interior experience unmatched by any BMW past or present. As a result of the interplay between precise, pared-down forms and an open sense of space, the driver and passengers find themselves immersed in a very modern setting with an equally exclusive feel. The wealth of possibilities offered by personalised, digital connectivity allows the vehicle’s interior to be turned, as desired, into a personalised place of either retreat or productivity. 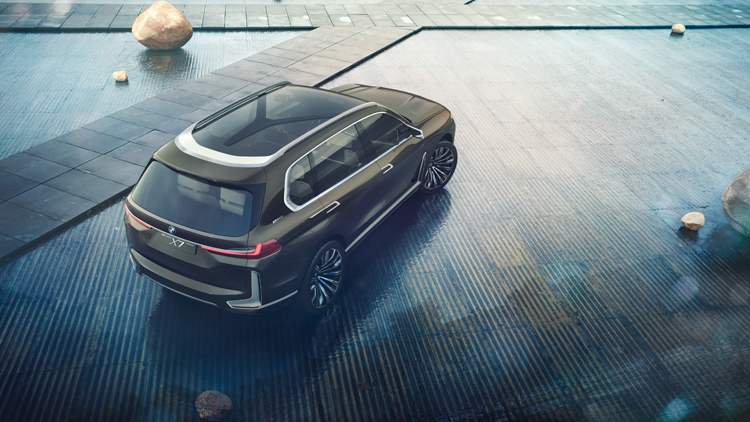 Inside the roomy cabin of the BMW Concept X7 iPerformance, clear forms, warm colours and select materials combine to create a highly exclusive, sophisticated ambience. In addition, the large panoramic roof provides a remarkable amount of room above the occupants’ heads while also giving the interior a light and airy, open-to-the-sky feel. The six amply proportioned seats are arranged in three rows, and four of them have an exclusive individual design. Secured to the vehicle floor by nothing more than a slender seat base, the individual seats allow those sitting directly behind to enjoy generous legroom.

The dark, olive-bronze leather – with discreet gold pigmentation – covering the seat bolsters carries the air of exclusivity through to the finer details and the Smoke White leather adorning the remainder of the seats provides an intriguing contrast. The shell-like backs of the individual seats are likewise trimmed in leather and serve to enhance the high-class, contemporary ambience. 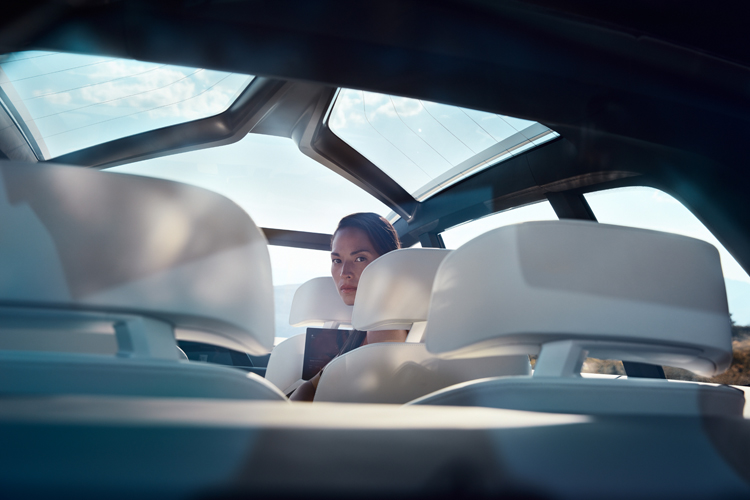 The dark shoulder line running underneath the windows traces a continuous horizon throughout the cabin that brings fresh calmness to the bright interior. Decorative materials are deployed sparingly. Having said that, the selective use of open-pore ash in a dark-stained, matt finish sets the seal on the natural material experience. Matt and polished aluminium elements have likewise been carefully incorporated to add further classy touches. And the luxurious sense of spaciousness enjoyed from all seats is reinforced to subtle effect by strands of laser light in the roof and the dynamic ambient and contour lighting. 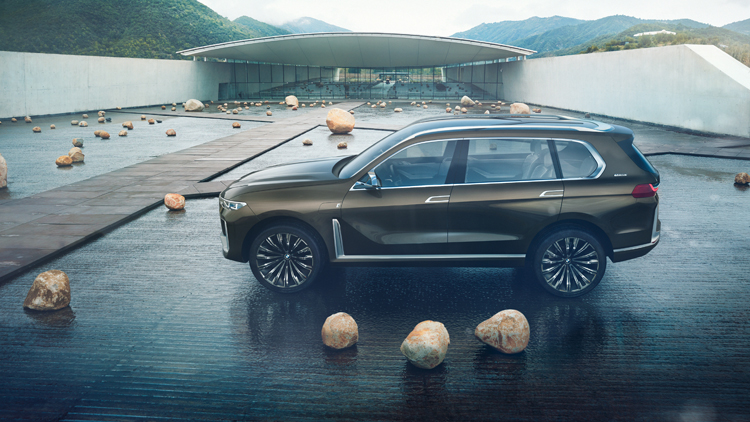 Amid the modern and pared-back design of the interior is the driver focus familiar to BMW customers. The forms and surfacing of the instrument panel, centre console and doors allow them to “wrap around” the driver. And the raised seating position provides unbeatable all-round visibility and an exceptional view over the road. The new BMW design language, featuring amply-sized surfaces and clear edges, gives the instrument panel a “reduced to the essentials”, modern aesthetic. 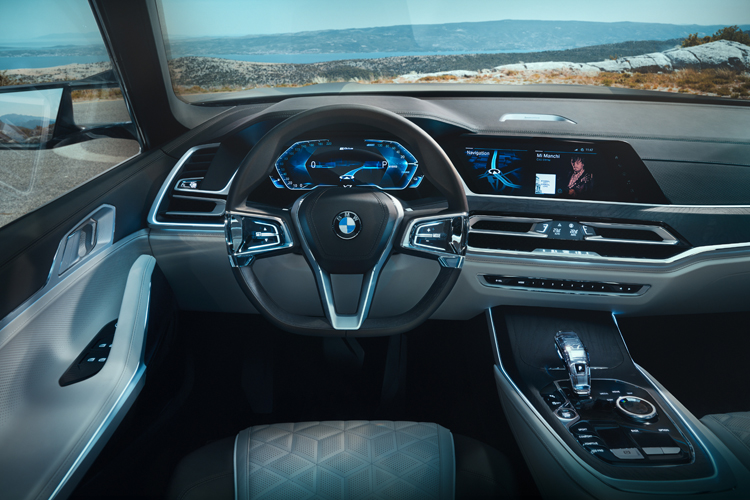 The 12.3-inch instrument cluster screen and central touchscreen information display are sited at close quarters to one another. The effect is of one unbroken – and smartly sophisticated – display. A new operating concept allows interactive use of the two displays. Below them, in the centre stack and centre console, the grouping of functions within the clean and tautly chiselled surfaces underscores the minimalist approach. Partially backlit crystal glass in the dark Silver Night shade lends sophisticated flourishes to control elements like the selector lever, iDrive Controller and multifunction buttons on the steering wheel.

The two individual seats in the second row offer all the benefits of the front pair. The first sign of an attachment between the panoramic roof and body comes comfortably to the rear of the second row of seats in the form of a Y structure, which means the passengers in the centre row experience the same sensation of freedom and lightness as those in the front. Second-row passengers also enjoy personalised infotainment comfort courtesy of the rear-seat entertainment system’s touchscreen monitors. 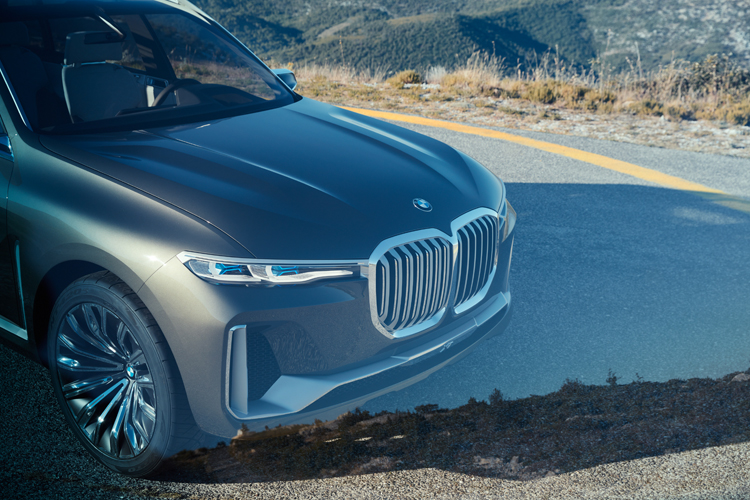 Here, the BMW Concept X7 iPerformance showcases the BMW Group’s vision of seamless integrating the customer’s digital world into the car via BMW Connected. For example, passengers here have access to highly personalised, digital services such as their choice of infotainment/office content, with which they can make their journey more comfortable, more entertaining or more productive. And content can even be shared with others on board. For instance, they can send a track to the car’s music system by touch gesture, forward an interesting article to the next-door display for the person sitting alongside them to read or transfer an address from their email directly to the car’s navigation system. Interactive LED choreography via the doors and instrument panel traces the communication flow between the rear screens and the display at the front of the cabin. 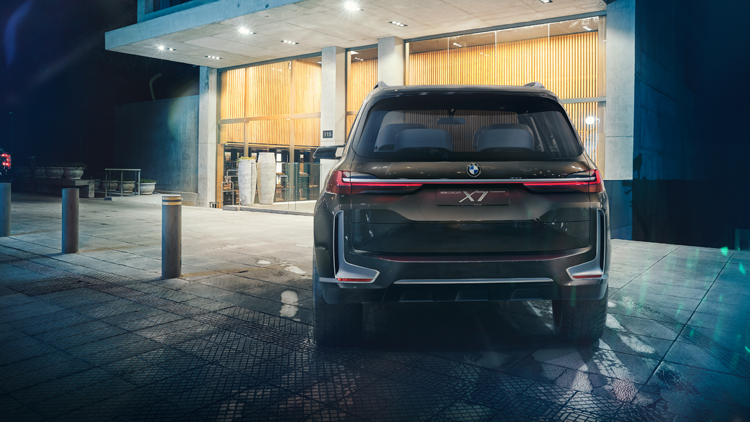 The expansive exterior of the BMW Concept X7 iPerformance projects the exclusive experience available inside the car confidently to the outside world. Clear, vertical proportions with significant ground clearance identify the Concept as an X model without the need to look twice. At the same time, the Concept speaks its own, unmistakable design language – a new one for BMW – through an array of details and design features which set it apart clearly from previous models. Viewed from any angle, the interplay between a small number of precise lines and artfully sculpted surfaces sends out a charismatic statement of modernity, presence and exclusivity.

The new BMW Concept X7 iPerformance will be unveiled for the first time at the IAA Cars 2017 show in Frankfurt on 14 – 24 September 2017.

all images and video courtesy of BMW Group