At the Monterey Car Week in California, Bugatti has presented the all-new Divo, a $5.8 million supercar produced in an already sold-out, limited edition run of 40. With the Divo, the French luxury brand has developed a super sports car tuned for agility, nimbleness and optimum handling performance on winding roads. It is powered by Bugatti’s iconic eight-litre W16 engine with a power output of 1,500 PS. The aerodynamics of the model have been intensively fine-tuned and the suspension and chassis settings have been modified.

As a result, the Divo is 35 kilograms (77 lbs) lighter and has 90 kilograms (198 lbs) more downforce than the standard Chiron. The lateral acceleration of the Divo has been boosted to 1.6 g. Its maximum speed is limited to 380 km/h (236 mph). The supercar is named after Albert Divo, a French racing driver who was a two-time winner of the famous Targa Florio race on the mountainous roads of Sicily with Bugatti in the late 1920s. 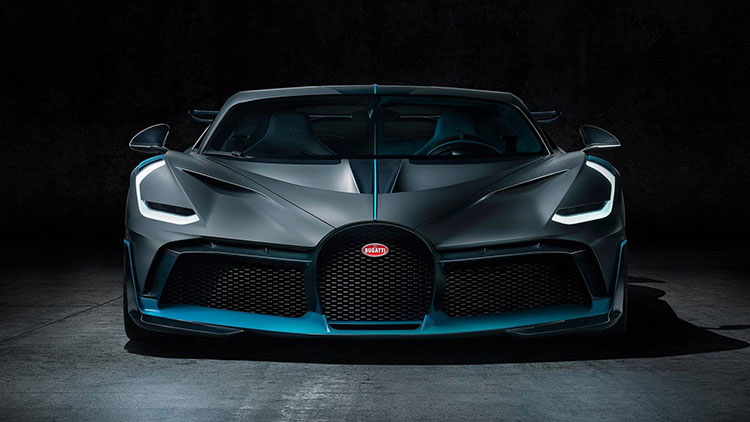 The aerodynamic properties of the Divo were improved by a considerable amount of detailed work. The front cover is equipped with air intakes which reduce the effective cross-sectional area of the vehicle at the same time as ensuring improved air flow at the front and increasing aerodynamic efficiency. An optimized “air curtain” makes for better air flow over the front and rear sections of the car’s sides. 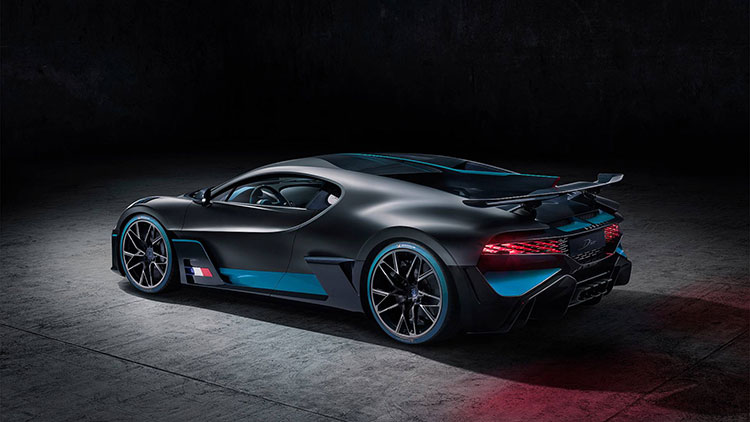 The brakes are cooled by four independent air sources on each side of the vehicle: air flows in from the high-pressure area above the front bumper, the inlets on the front wings, one inlet on the front radiator and the diffusers ahead of the tyres. Vanes direct the cold air from these areas onto the brake discs. A heat shield carries the hot air out through the wheels. This means that the brakes do not overheat and the tyre temperature is always kept in the optimum range. This system, which is already used on the Chiron, receives additional support from the vacuum generated by the air curtain on the tyres in the case of the Divo. In addition, the wheel arches are ventilated via slats on the wings. 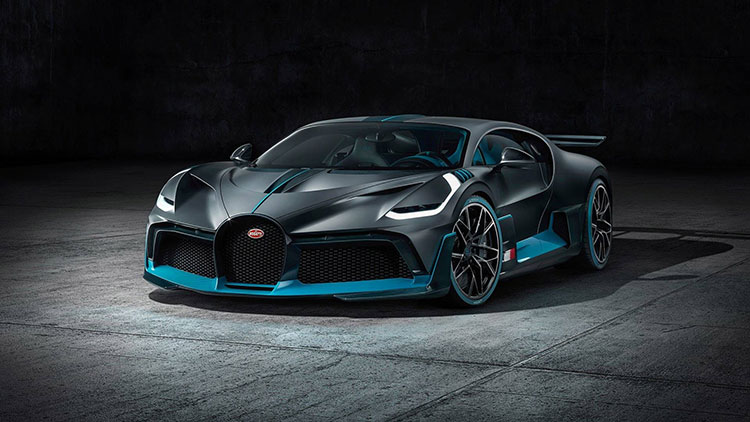 The roof of the Divo has been designed to form a NACA air duct, a flow-optimized air inlet. In combination with the specially designed engine compartment cover, this ensures a very high air mass flow to the engine compartment, playing a key role in temperature management in this area of the vehicle.

The rear end of the Divo features a new, height-adjustable rear spoiler which functions as an air brake when turned forwards and is set to different angles for the individual driving modes. The rear spoiler has a width of 1.83 metres (72”) and is therefore 23 percent wider than on the Chiron. The wider spoiler improves efficiency and results in higher air brake performance as well as significantly more downforce.

The downforce is also boosted by the rear diffuser which has been entirely redesigned for greater efficiency and accommodates four tailpipes. The total downforce generated is 456 kilograms, 90 kg more than on the Chiron. 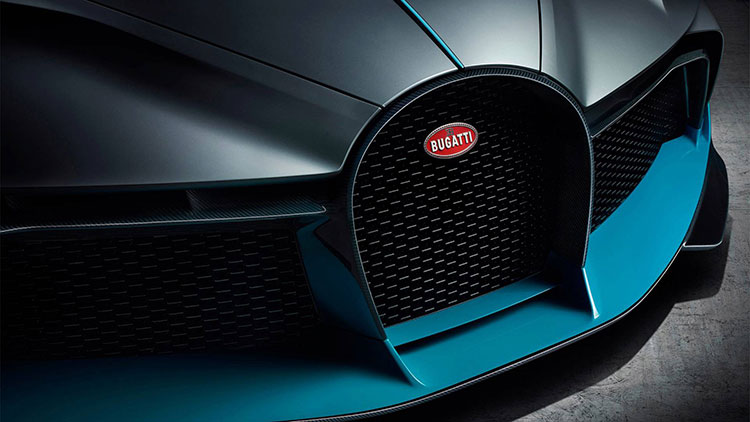 The outer skin of the Divo was designed in an uncompromising way to emphasize lateral acceleration. The main objective was to achieve optimum aerodynamic and thermodynamic efficiency. At the same time, the Divo represents a new styling approach which the design team has developed especially for a coachbuilt Bugatti and which is distinguished from the modern core products of the brand.

The slimmer side line of the Divo helps make the vehicle look lower and longer. The new proportions allow a visual horizontal division of the body, which is reinforced by a special colour scheme. The top, more elegant section is painted with a matt finish in a silver colour “Titanium Liquid Silver” developed especially for the Divo. This effectively underpins the sculptural, muscular form of the car. The long domed areas with their smooth surfaces along the C-pillar and the rear side sections optically shift the driver’s cab forwards. This gives the Divo an extremely dynamic appearance even when the vehicle is standing still.

The lower part of the sides has more of a functional, technical design, reinforcing the car’s forceful appearance and giving it a confident stance on the road. This section features exposed carbon fibre tinted in a petroleum blue shade, “Divo Carbon”, developed especially for this model. 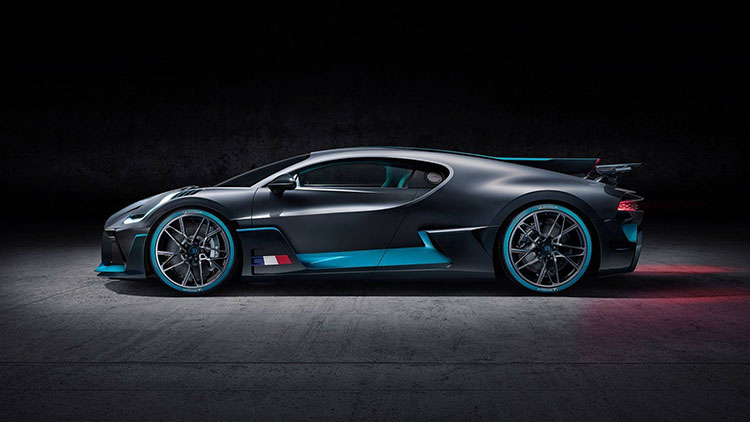 An entirely new architecture was developed for the front of the car. There are additional air inlets for brake cooling. The new, vertically oriented front lights with daytime running light on the outer edge in each case give the Divo an appearance of greater width. With a light opening which is only 35 millimetres (1 3/8“) flat, the extremely compact, lightweight LED headlights move into a new technical dimension. A light animation developed especially for the Divo underlines the distinctive signature of the front end. The horizontal split into a lower carbon and an upper matt silver section also makes the Divo look lower and underlines the optical impression of width. 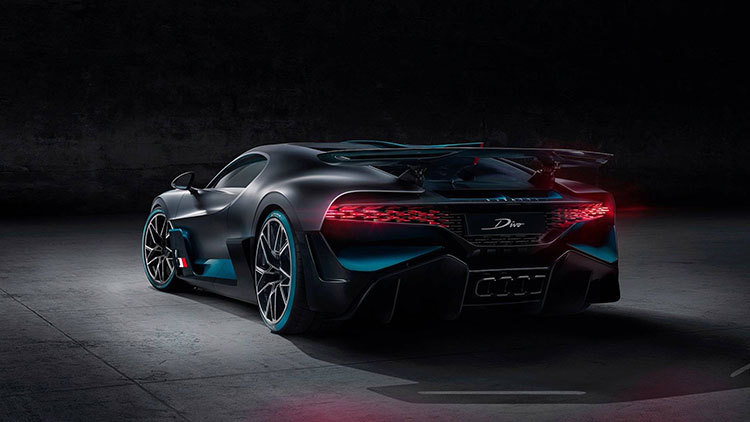 The two-tone color scheme also intensifies the forceful impression created by the rear. The fenders are painted in “Titanium Liquid Silver” with a matt finish and are optically distinguished from the parts which control airflow at the rear end. Air outlets, rear spoiler and diffuser have a carbon finish.

“Divo Racing Blue”, a bright turquoise blue shade developed especially for the Divo, underlines the three-dimensional character of the three surfaces leading to the air inlets and outlets on the front, sides and rear, creating dynamically contrasting effects. 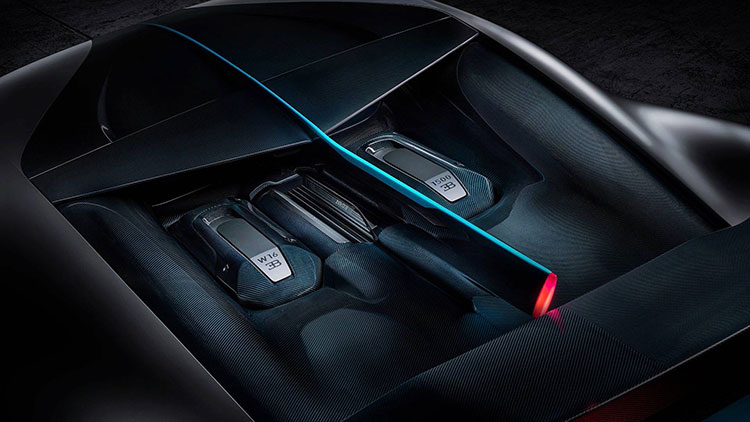 The technical character of the color scheme and materials used for the exterior is continued in the interior. A matt version of the exclusive high-gloss carbon fibre used on the exterior is to be found in the interior. The color effects of the carbon tint and exterior paintwork are reflected on a 1:1 basis by the dark “Divo Grey” petroleum tone of the Alcantara in the interior, providing a subtle contrast with the glass-blasted anodized grey surfaces of the metal parts. 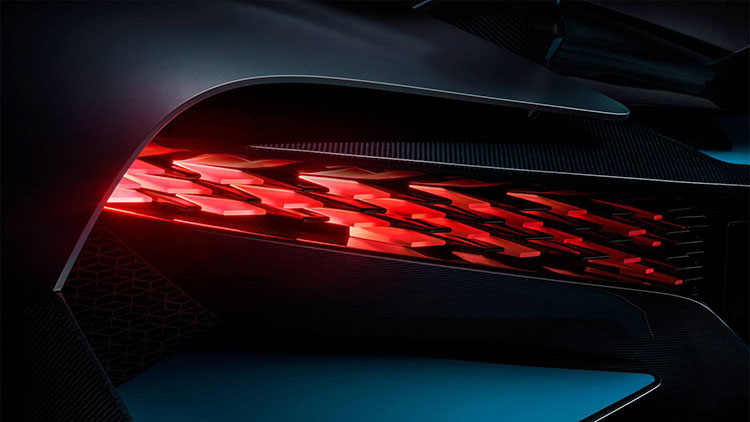 The distinctive “Divo Racing Blue” is also used as an Alcantara leather tone in the interior, where it plays a special role by providing an optical split in the interior surfaces. This color is used almost throughout the driver’s section while it only provides selected accents in the darker passenger’s section.

Another stylistic link between interior and exterior is created by the door trims and seat areas, which feature an embroidered three-dimensional rhomboid structure with an algorithmic configuration, reinterpreting the structure of the grille and rear lights. 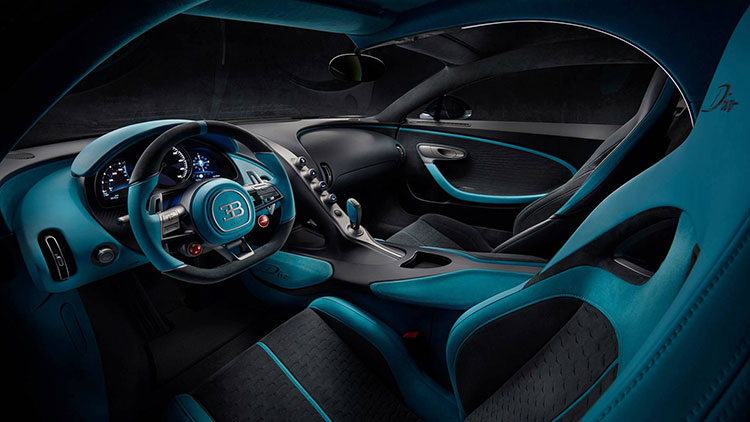 Technical innovations in the interior include the seats, which not only feature a new design but offer greater lateral support. The steering wheel is partly covered with Alcantara and has larger paddles fitted firmly on both sides of the wheel. Thanks to larger armrests and calf supports, the central console ensures greater comfort.