Ferrari has unveiled its first series production PHEV (Plug-in Hybrid Electric Vehicle), the SF90 Stradale. The car’s name encapsulates the true significance of all that has been achieved in terms of performance. The reference to the 90th anniversary of the foundation of Scuderia Ferrari underscores the strong link that has always existed between Ferrari’s track and road cars.

The SF90 Stradale has a 90° V8 turbo engine capable of delivering 780 cv, the highest power output of any 8-cylinder in Ferrari history. The remaining 220 cv is delivered by three electric motors, one at the rear, known as the MGUK (Motor Generator Unit, Kinetic) due to its derivation from the Formula 1 application, located between the engine and the new 8-speed dual-clutch transmission on the rear axle, and two on the front axle. This sophisticated system does not, however, make for a more complicated driving experience. Quite the opposite, in fact: the driver simply has to select one of the four power unit modes, and then just concentrate on driving. The sophisticated control logic takes care of the rest, managing the flow of power between the V8, the electric motors and the batteries. 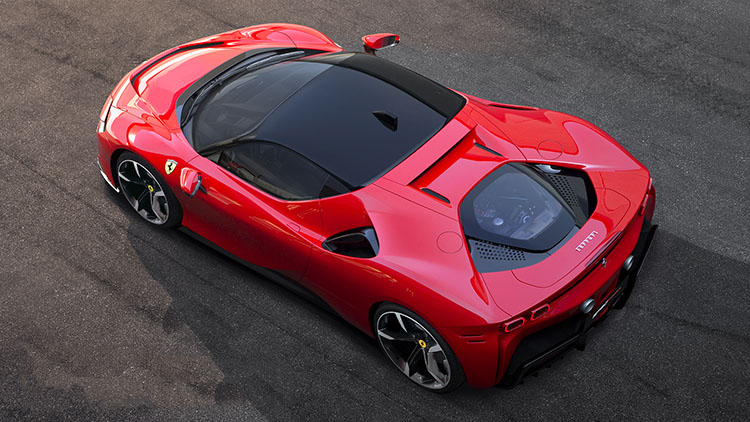 The SF90 Stradale is also the first Ferrari sports car to be equipped with 4WD, a step necessary to allow the incredible power unleashed by the hybrid powertrain to be fully exploited, ensuring the car has become the new benchmark for standing starts: 0-100km/h (0-63 mph) in 2.5 sec and 0-200km/h (0-124 mph) in just 6.7 seconds.

The development of a hybrid car of this kind demanded the development of a series of innovative aerodynamic solutions. Particularly noteworthy is the innovative shut-off Gurney, a patented active system located at the rear of the car which regulates the air flow over the upper body, reducing drag at high speeds with low lateral dynamics loads and increasing downforce in corners, under braking and during changes of direction. 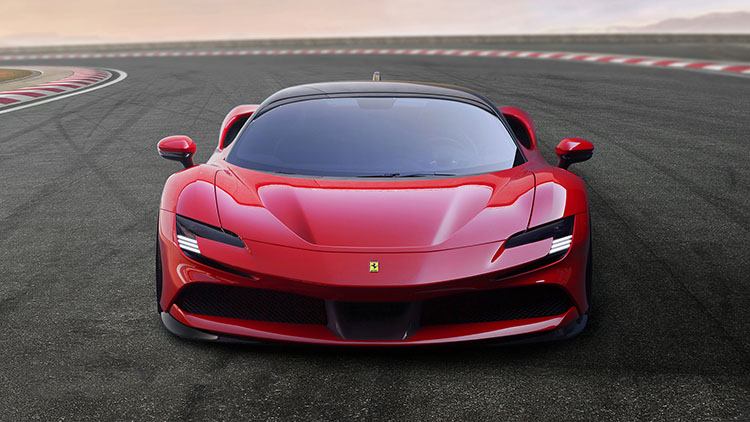 The new car is epoch-changing from a stylistic perspective as it completely rewrites the mid-rear-engined sports berlinetta proportions introduced on the 360 Modena twenty years ago, instead taking its inspiration from Ferrari’s recent supercars. A good example is the cockpit, which has a smaller frontal section and is placed closer to the front of the car to reduce drag. This was also achieved without impacting on-board comfort. 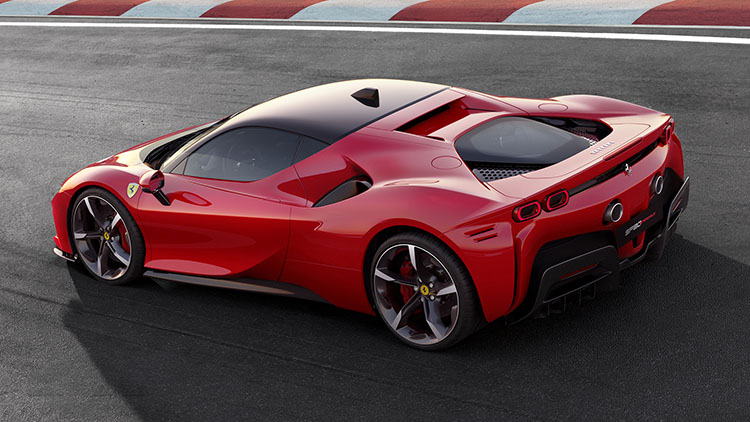 The track-derived “eyes on the road, hands on the wheel” philosophy takes on a truly central role for the first time too, significantly influencing the ergonomics and styling of the interior. The result is an HMI (Human-Machine Interface) and interior layout concept that are a complete departure from previous models. 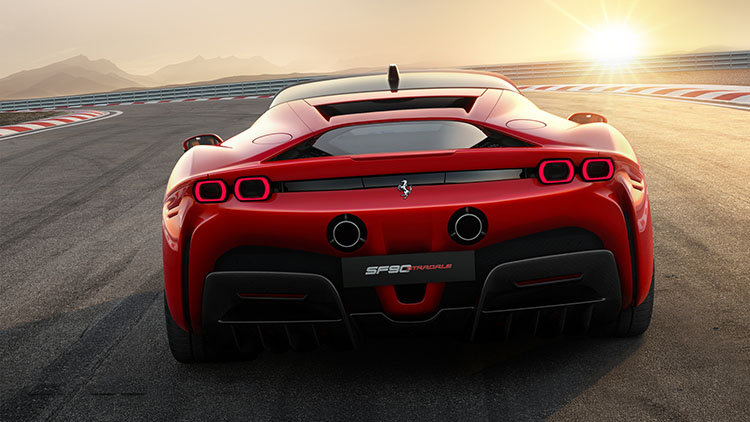 Another major innovation is the steering wheel which now has a touchpad and a series of haptic buttons that allow the driver to control virtually every aspect of the car using just their thumbs. The central instrument cluster is now entirely digital with the first automotive application of a 16” curved HD screen which can be fully configured and controlled using the controls on the steering wheel. 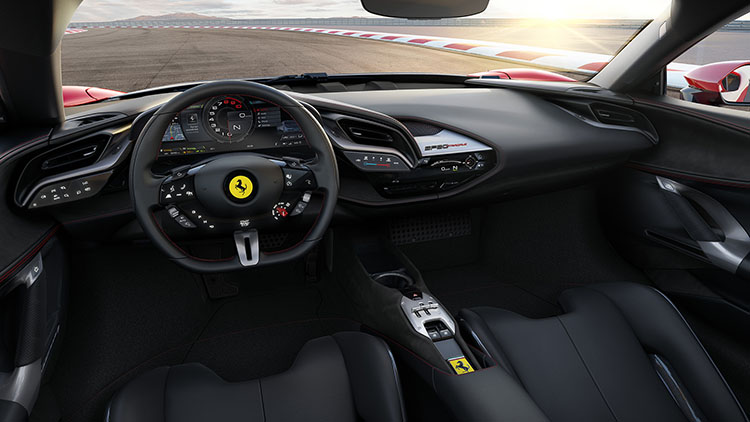 On the central tunnel, improved ergonomics have been combined with an element from the past: the automatic gearbox controls are now selected by a grille-style feature that references Ferrari’s legendary manual gear-shift gate. Thus past and present skilfully merge to point the new Ferrari towards the future.

The SF90 Stradale also sees the debut of the new ignition key with full keyless technology which will gradually be introduced across the rest of the range, personalized with the model’s name. Thanks to a special compartment in the central tunnel, it becomes an integral part of the car’s styling. In addition to the sporty version, which references the shape and colour of the signature rectangular Prancing badge sported by Ferrari’s road cars, there will also be a more elegant metal-colored version. 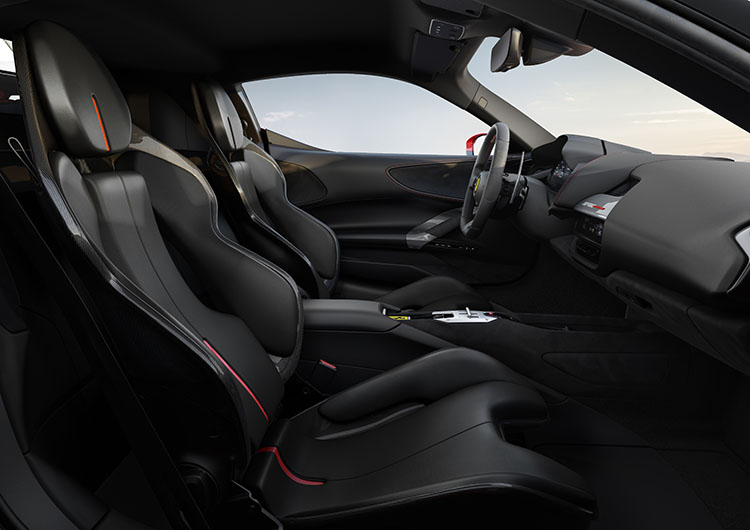 For the first time on a Ferrari, clients can choose between the standard car and a version with a more sports-oriented specification. The Assetto Fiorano specification includes significant upgrades, including special GT racing-derived Multimatic shock absorbers,   extra lightweight features made from high-performance materials such as carbon-fiber (door panels, underbody) and titanium (springs, entire exhaust line), resulting in a weight-saving of 30 kg (66 lbs). Another difference is the high downforce carbon-fibre rear spoiler which generates 390 kg (859 lbs) of downforce at 250 km/h (155 mph). The Assetto Fiorano includes Michelin Pilot Sport Cup2 tyres designed specifically to improve performance on the track in the dry. They feature a softer compound and fewer grooves than the tyres provided as standard.