Dutch practice MVRDV has completed the Tianjin Binhai Library, a 33,700m2 cultural centre featuring a luminous spherical auditorium around which floor-to-ceiling bookcases cascade. The undulating bookshelf is the building’s main spatial device, and is used both to frame the space and to create stairs, seating, the layered ceiling and even louvres on the façade. Tianjin Binhai Library was designed and built in a record-breaking time of only three years due to a tight schedule imposed by the local municipality. Next to many media rooms it offers space for 1,2 million books. 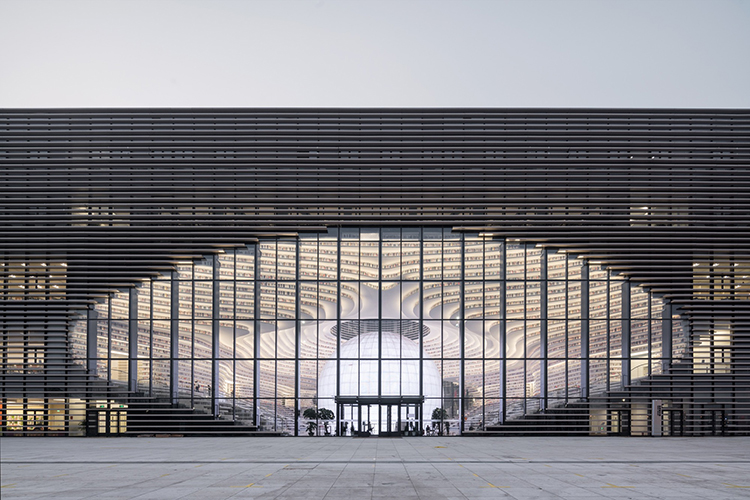 Designed in collaboration with the Tianjin Urban Planning and Design Institute (TUPDI), the library was commissioned by Tianjin Binhai Municipality and is located in the cultural centre of Binhai district in Tianjin, a coastal metropolis outside Beijing, China. The library, located adjacent to a park, is one of a cluster of five cultural buildings designed by an international cadre of architects including Bernard Tschumi Architects, Bing Thom Architects, HH Design and MVRDV. All buildings are connected by a public corridor underneath a glass canopy designed by GMP. Within the GMP
masterplan MVRDV was given a strict volume within which all design was concentrated. 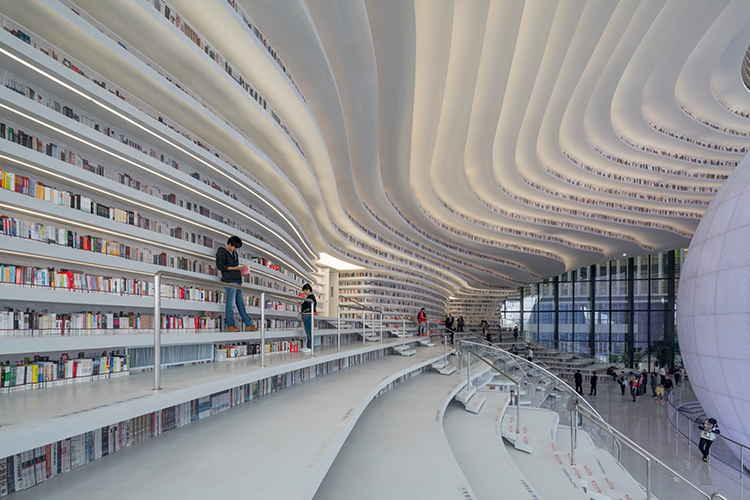 The building’s mass extrudes upwards from the site and is ‘punctured’ by a spherical auditorium in the center. Bookshelves are arrayed on either side of the sphere and act as everything from stairs to seating, even continuing along the ceiling to create an illuminated topography. These contours also continue along the two full glass facades that connect the library to the park outside and the public corridor inside, serving as louvres to protect the interior against excessive sunlight whilst also creating a bright and evenly lit interior. 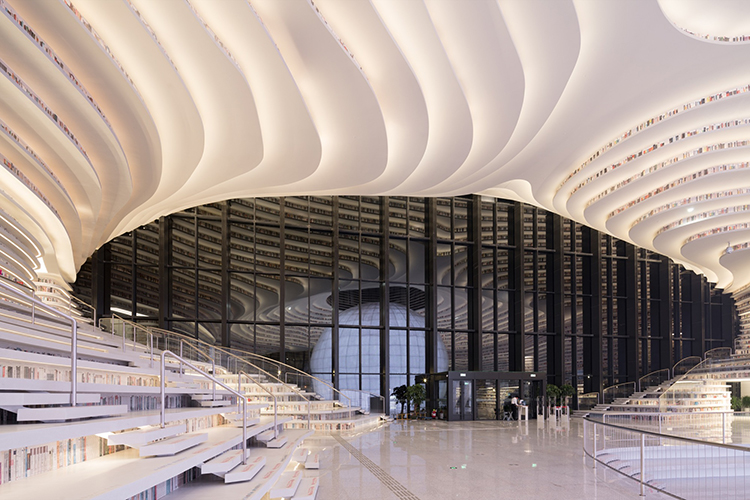 “The Tianjin Binhai Library interior is almost cave-like, a continuous bookshelf. Not being able to touch the building’s volume we ‘rolled’ the ball shaped auditorium demanded by the brief into the building and the building simply made space for it, as a ‘hug’ between media and knowledge” says Winy Maas, co-founder of MVRDV. “We opened the building by creating a beautiful public space inside; a new urban living room is its centre. The bookshelves are great spaces to sit and at the same time allow for access to the upper floors. The angles and curves are meant to stimulate different uses of the space, such as reading, walking, meeting and discussing. Together they form the ‘eye’ of the building: to see and be seen.” 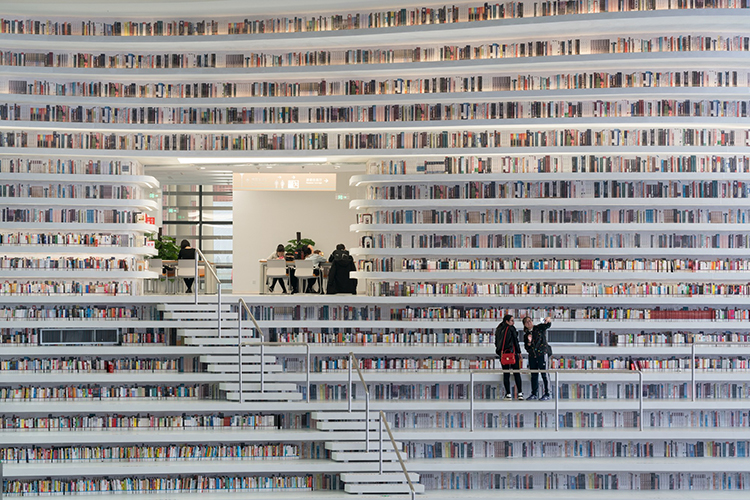 The five-level building also contains extensive educational facilities, arrayed along the edges of the interior and accessible through the main atrium space. Public program is supported by subterranean service spaces, book storage, and a large archive. From the ground floor visitors can easily access reading areas for children and the elderly, the auditorium, the main entrance, terraced access to the floors above and connection to the cultural complex. The first and second floors consist primarily of reading rooms, books and lounge areas whilst the upper floors also include meeting rooms, offices, computer and audio rooms and two roof top patios. 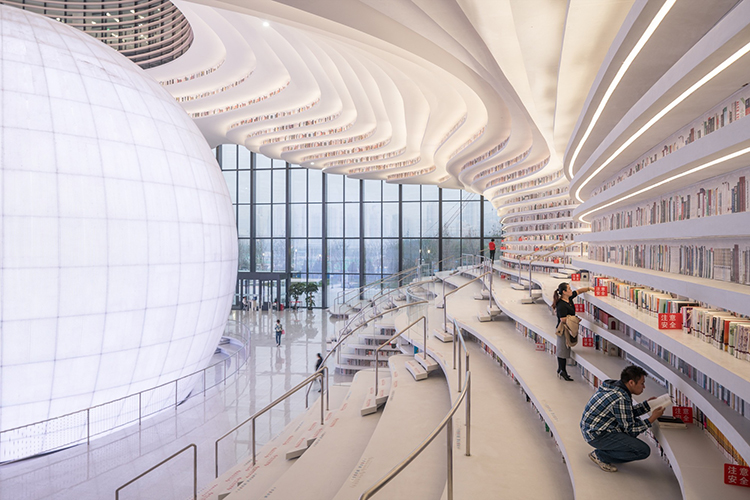 The library is MVRDV’s most rapid fast-track project to date. It took just three years from the first sketch to the opening. Due to the given completion date site excavation immediately followed the design phase. The tight construction schedule forced one essential part of the concept to be dropped: access to the upper bookshelves from rooms placed behind the atrium. This change was made locally and against MVRDV’s advice and rendered access to the upper shelves currently impossible. The full vision for the library may be realised in the future, but until then perforated aluminium plates printed to represent books on the upper shelves. Cleaning is done via ropes and movable scaffolding. 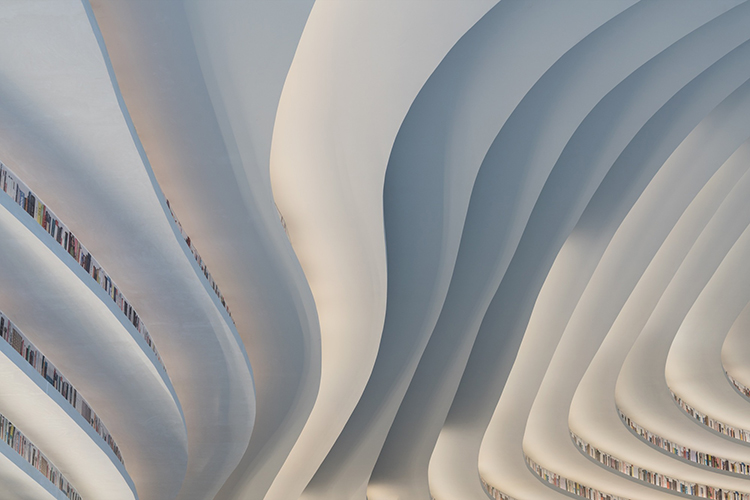 Since its opening on 1 October, 2017 the building has been a great hit in Chinese media and social media; reviews describe it as an ‘Ocean of Books’ (CCTV) and the ‘Most beautiful library of China’ (The Bund). Comments on social media call the building a ‘sea of knowledge’, ‘Super Sci-Fi’ or simply ‘The Eye.’ Most importantly, it is clear that the people of Tianjin have embraced the new space – and that it has become the urban living room it was intended to be. 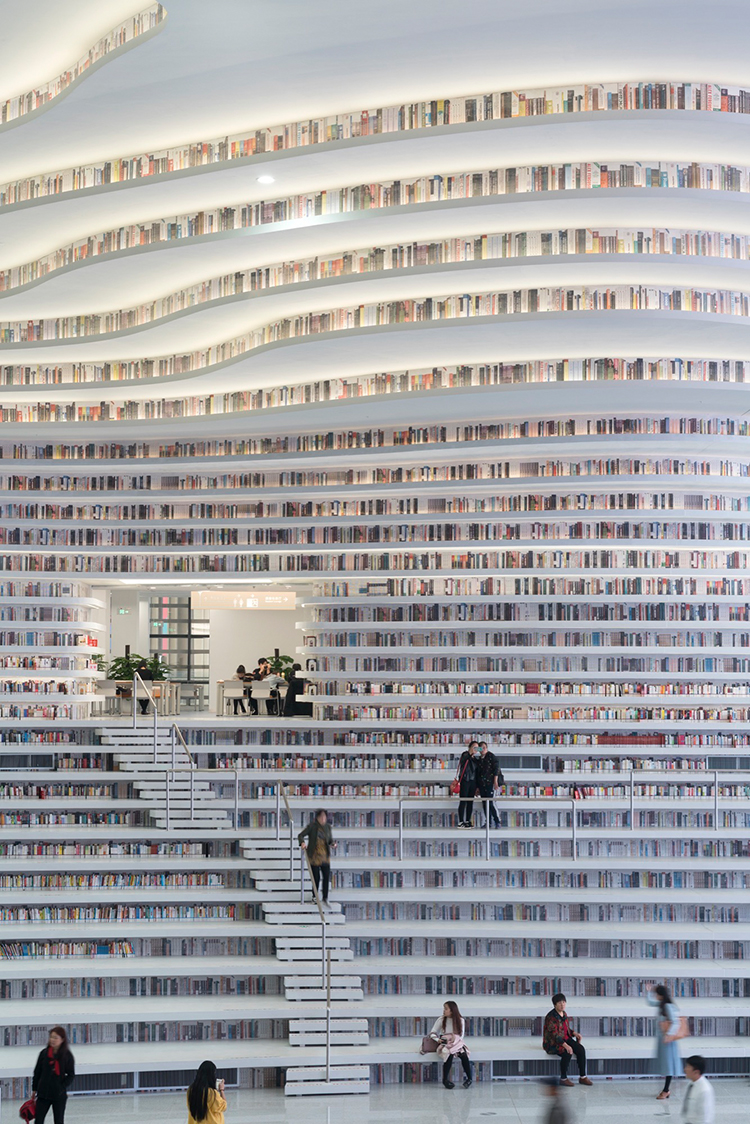 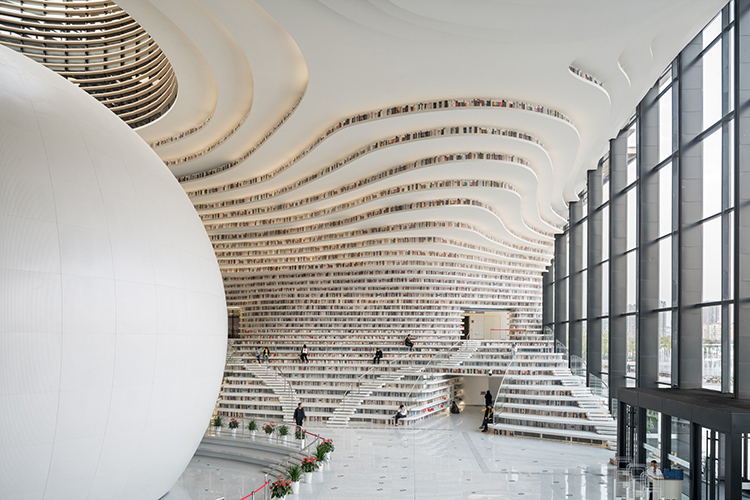 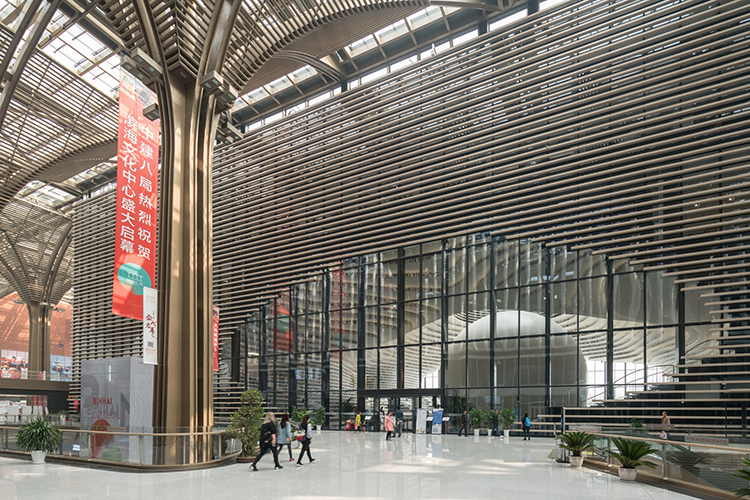 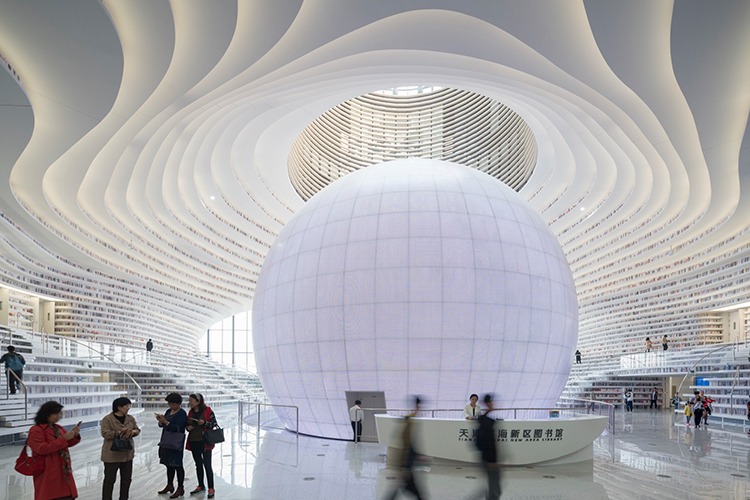 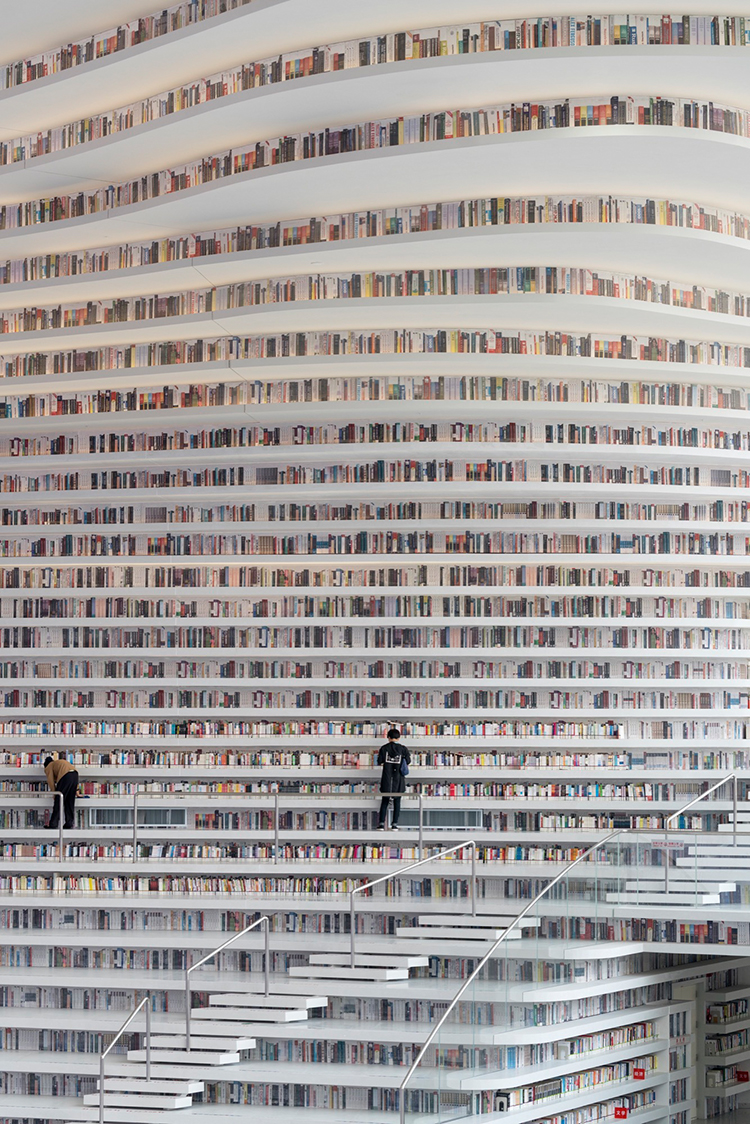 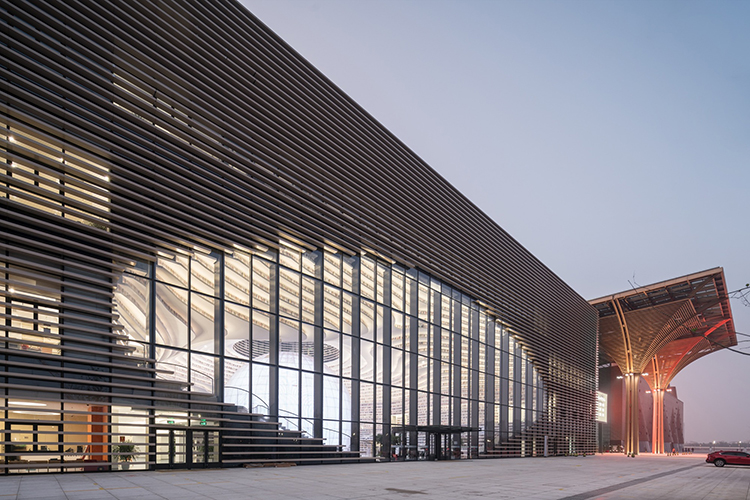 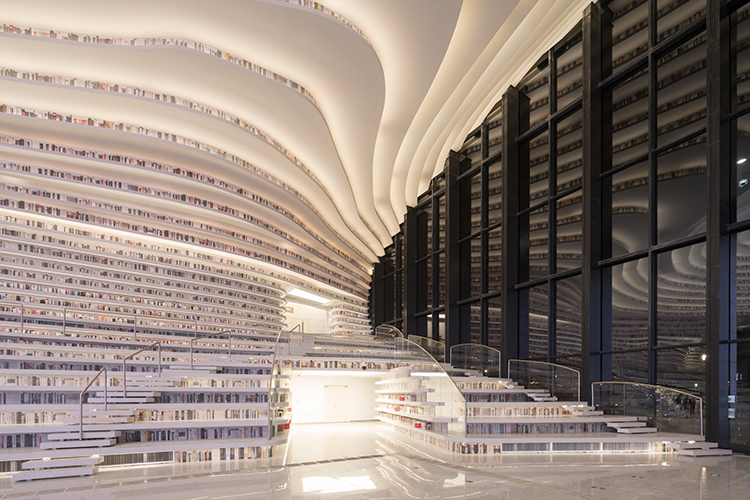 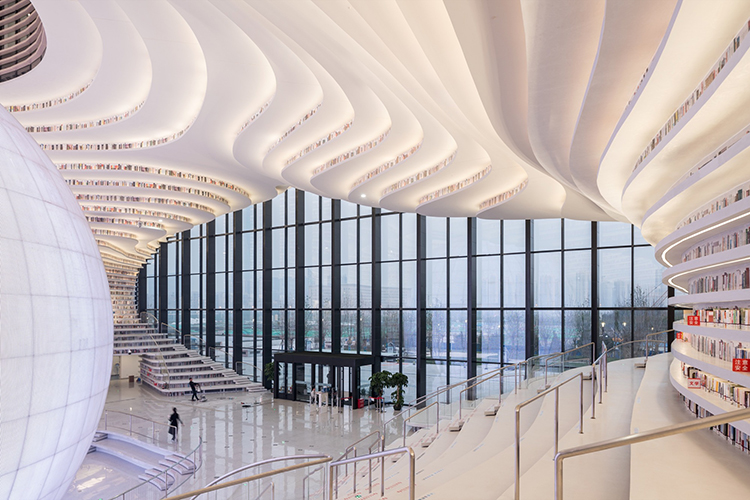 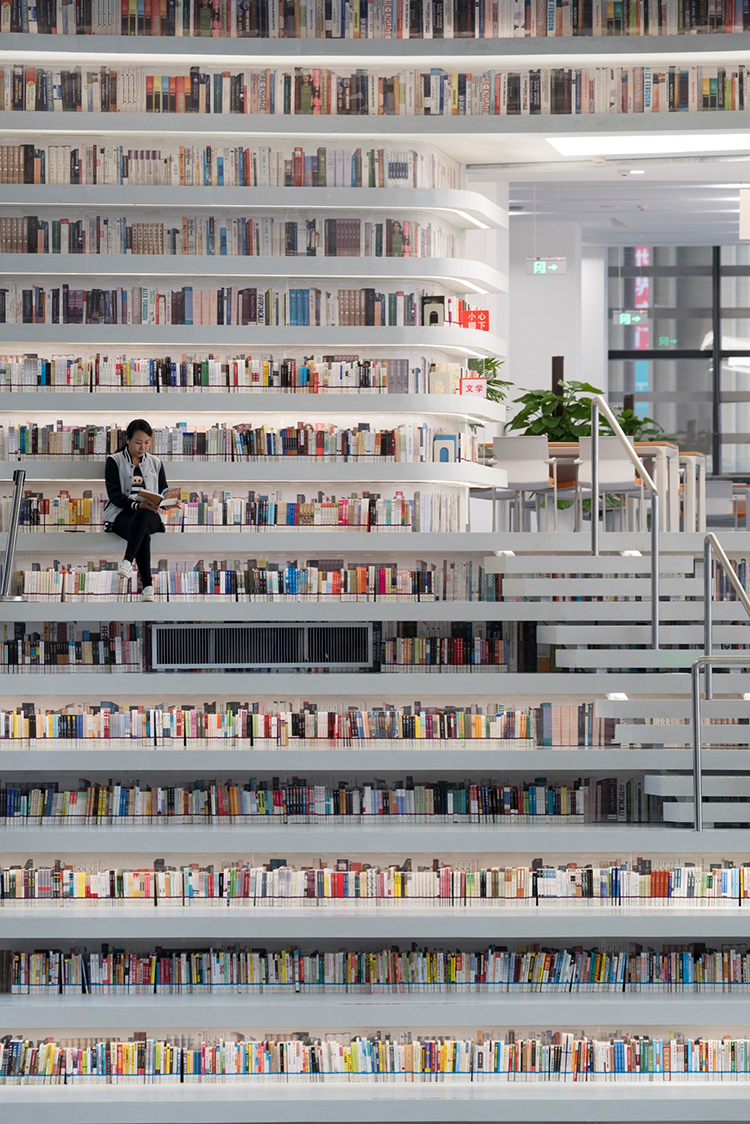