BMW has teamed up with Garage Italia Customs to realize two new versions of the i8 and i3 models wrapped in a new color concept called CrossFade. The two one-offs are characterised by a unique livery that uses geometrical shapes for a gradient effect.

The two one-offs are to celebrating BMW hybrid cars, sophisticated and complicated mechanisms representing the highest expression of the technological progress in this sector today. For this reason, the Garage Italia Customs Style Centre decided to create a livery that would emphasize the true essence of the BMW i philosophy, breaching traditional methods of varnishing. Classic gradient, obtained by the homogeneous fading from one colour to another, has been replaced by a “digital” version. Geometrical shapes of increasing size give the same effect but in a definitely more sophisticated way as well as having a stronger visual impact.

The technique the Garage Italia Customs maestros used was inspired by the artistic movements of the 19th century like pointillism, divisionism and pop art. Its basis is the optical colour mixing theory, according to which our brain tends to blend adjacent colours giving us the impression of a gradient. 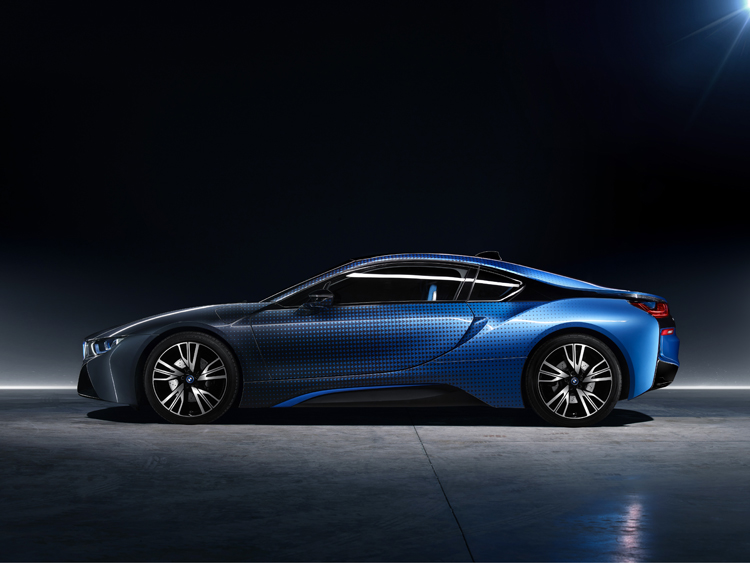 On the body of the BMW i8 Garage Italia CrossFade, the colour variation – from Protonic Dark Silver metallic on the front to a Protonic Blue metallic rear – further emphasizes the dynamic lines of the car. This effect is also thanks to the choice of using the triangle as the main geometrical shape in the pattern. The result was obtained through a complex procedure: the car, which was metallic Protonic Blue metallic to start with, was first covered in order to produce the desired geometric drawing precisely, then painted with Protonic Dark Silver metallic. We find the same pattern printed on the Alcantara upholstery of the centre console, door panels and the whole headliner. The seats are upholstered in Foglizzo leather, pierced black Alcantara® and Protonic Blue Alcantara. 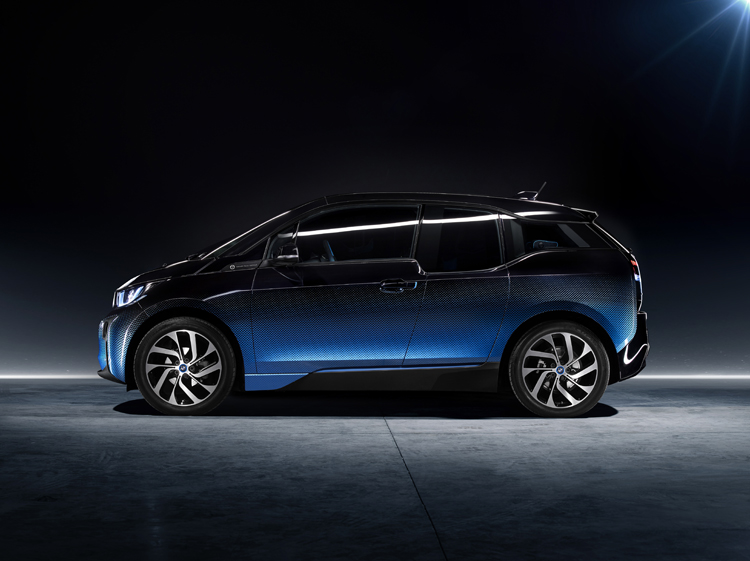 Instead, on the BMW i3 Garage Italia CrossFade the colour variation develops vertically, going from metallic Protonic Blue metallic to black. In this case wrapping has taken the place of varnishing, with an application technique that was thought up especially for the occasion. With the intent to symbolize the pleasure of driving this electric five-door, the technicians of Garage Italia Customs printed a series of round shapes increasing size on transparent film. This film was matched to a transparent glossy film through cold rolling. Both films are produced by 3M. The distinctive colour design is also to be found in the interior, where high-quality textile and Alcantara surfaces additionally emphasise the premium character of the car. 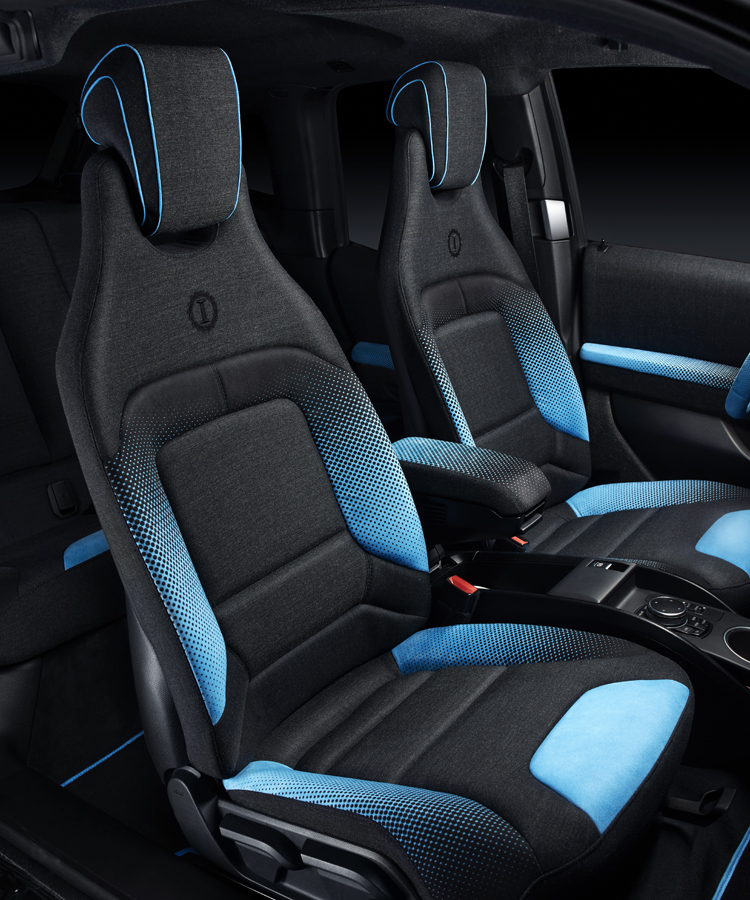 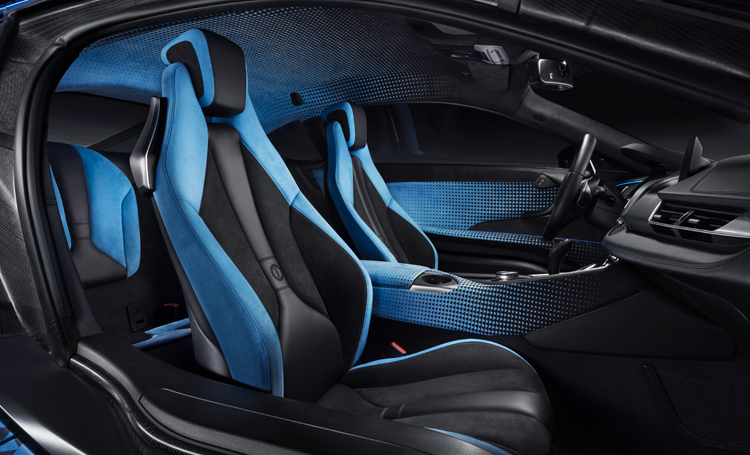 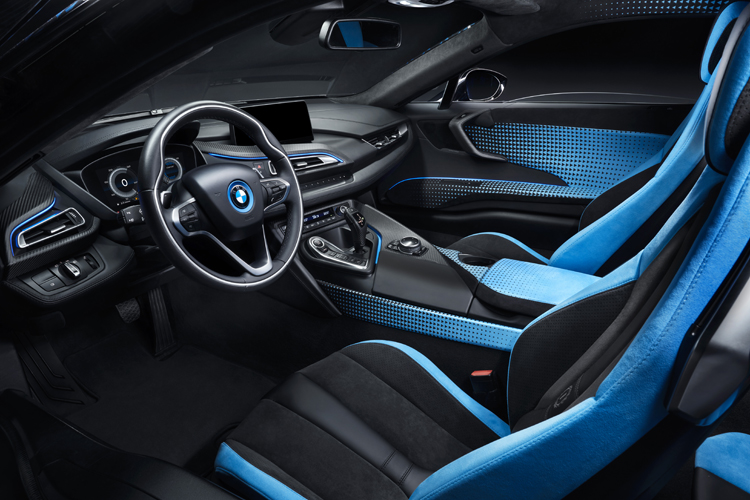 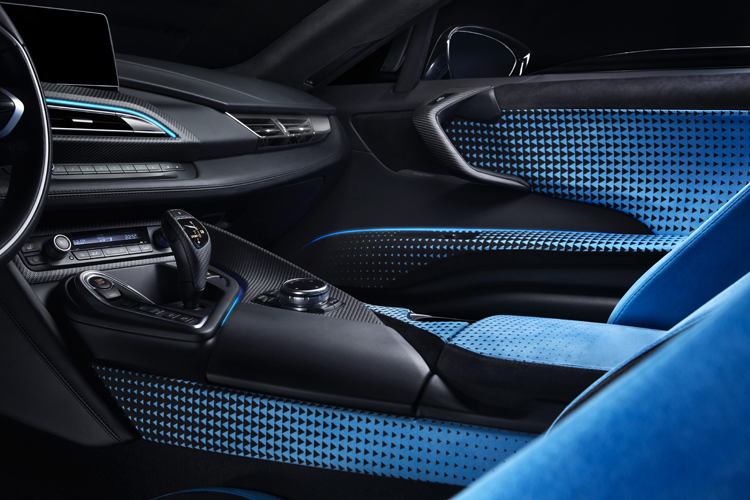 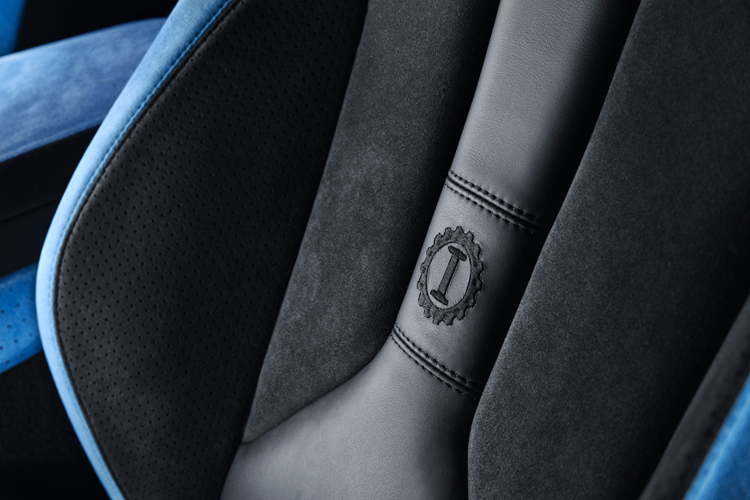 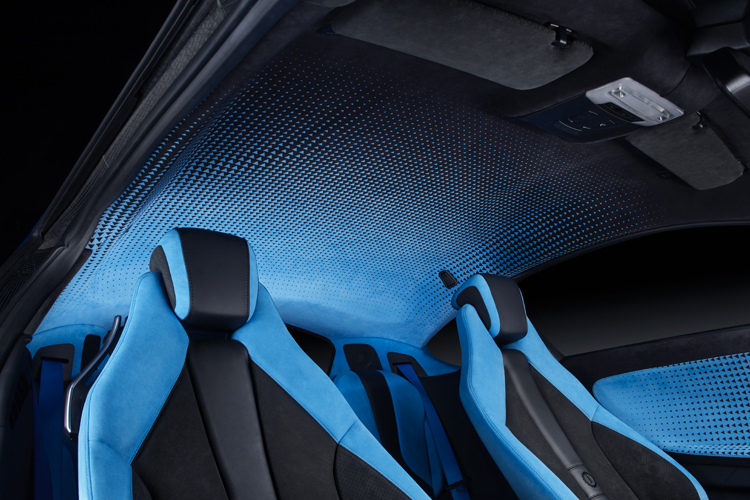 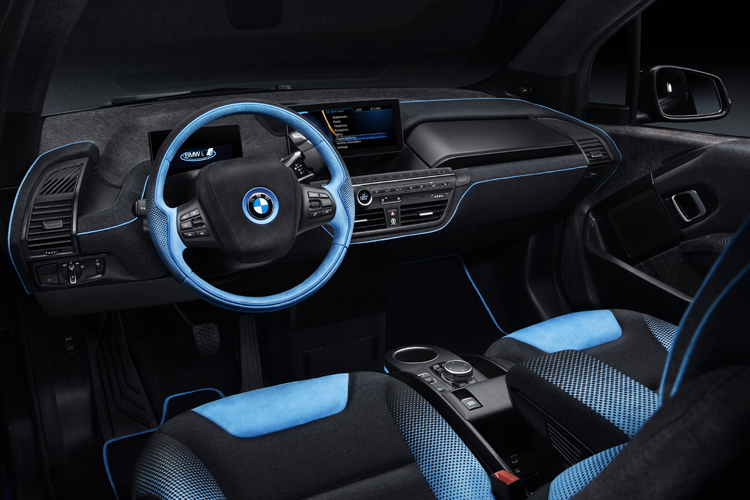 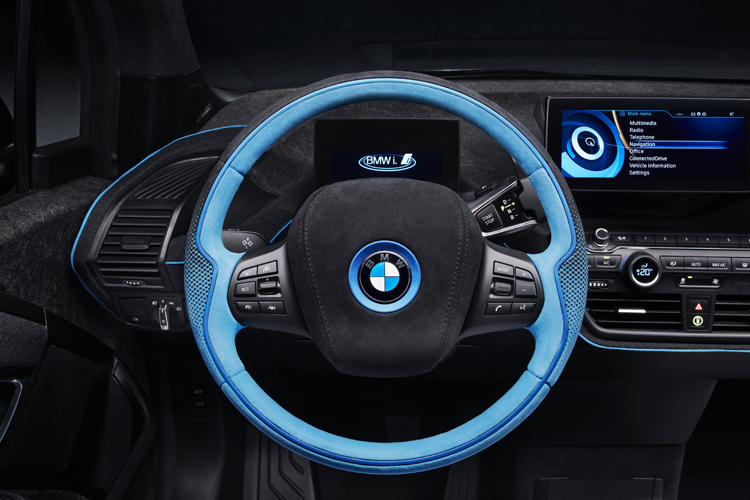 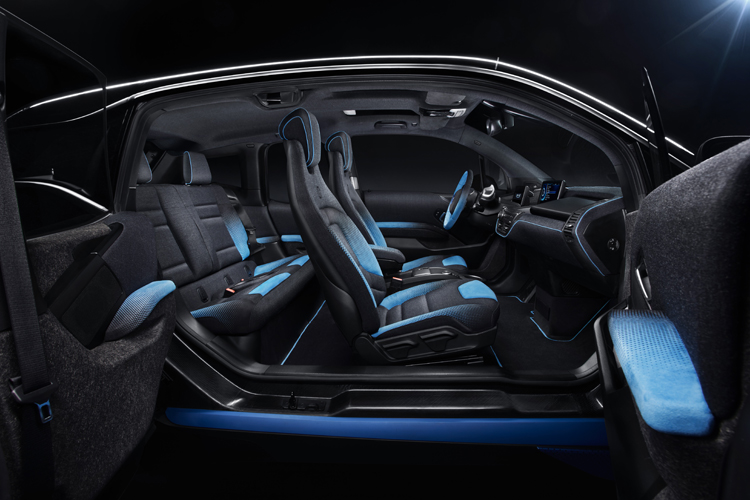 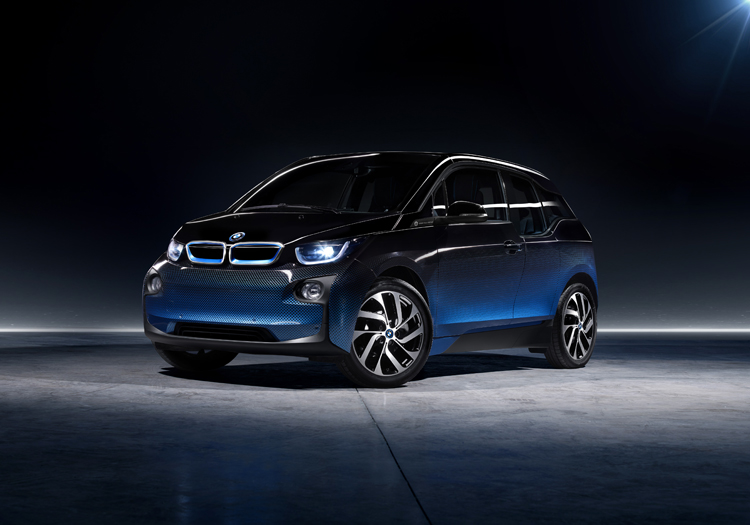 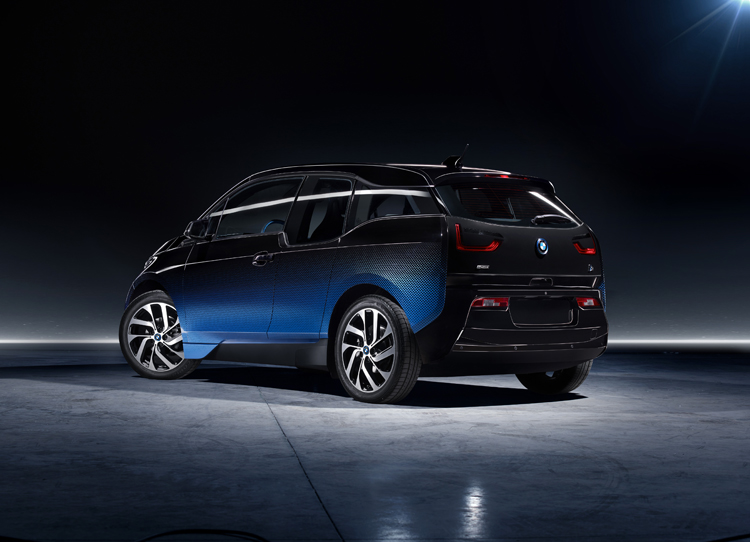 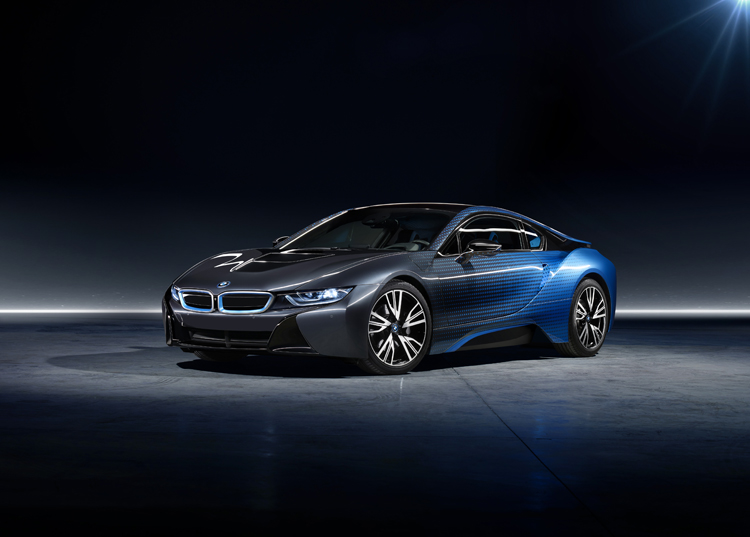 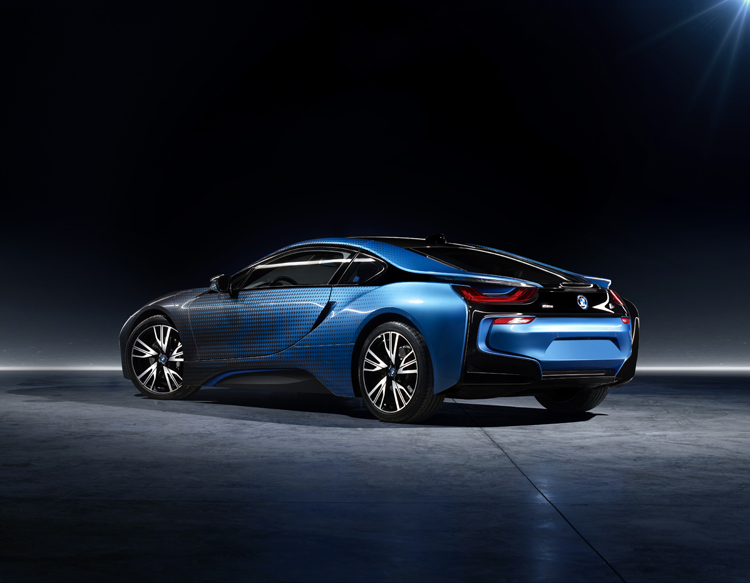